In 2019, many active US equity strategies suffered from capital gains, underperformance and/or high fees.

As a result, investors are shifting to other vehicles, including ETFs—a trend we expect to continue.

The phrase “Ball doesn’t lie” is a basketball term, first uttered by former New York Knicks forward Rasheed Wallace. And in my view, it very much applies to today’s fund industry.

The ringer.com explains1 the meaning and usage of the “ball doesn’t lie” expression as,

The Big Three Posting Up the Fund Industry
So how does this apply to the fund industry? Flows, in this case, are the ball. And based on the trend of assets moving from mutual funds to Exchange Traded Funds (ETFs) over the past decade, investors seem to prefer ETFs. Flows don’t lie.

While assets have grown by $1.9 trillion over the past decade for US large-, mid-, and-small-cap active equity mutual fund strategies, it has all been from market appreciation, as investors have redeemed $1.3 trillion over the last 10 years.2 Broad based underperformance trends are a common reason cited for the redemptions, but it’s not the only reason. Capital gain dividends3 and high fees round out the “big three”. However, unlike the “big three”4  that led the Boston Celtics to numerous titles in the 1980’s, this troika is leading to a shift in buying behavior to lower cost indexed-based vehicles, like ETFs.

Active US Equity Getting Dunked On By Poor Results…Again
Charging a high fee, underperforming a benchmark, or paying a capital gain are three reasons why an investor may be hesitant to either remain in a fund or even invest in the first place. But, for a fund to be guilty of all three at once, that is assuredly not a recipe for long-term success. Unfortunately, in 2019, there were quite a few active US equity strategies that had all three. 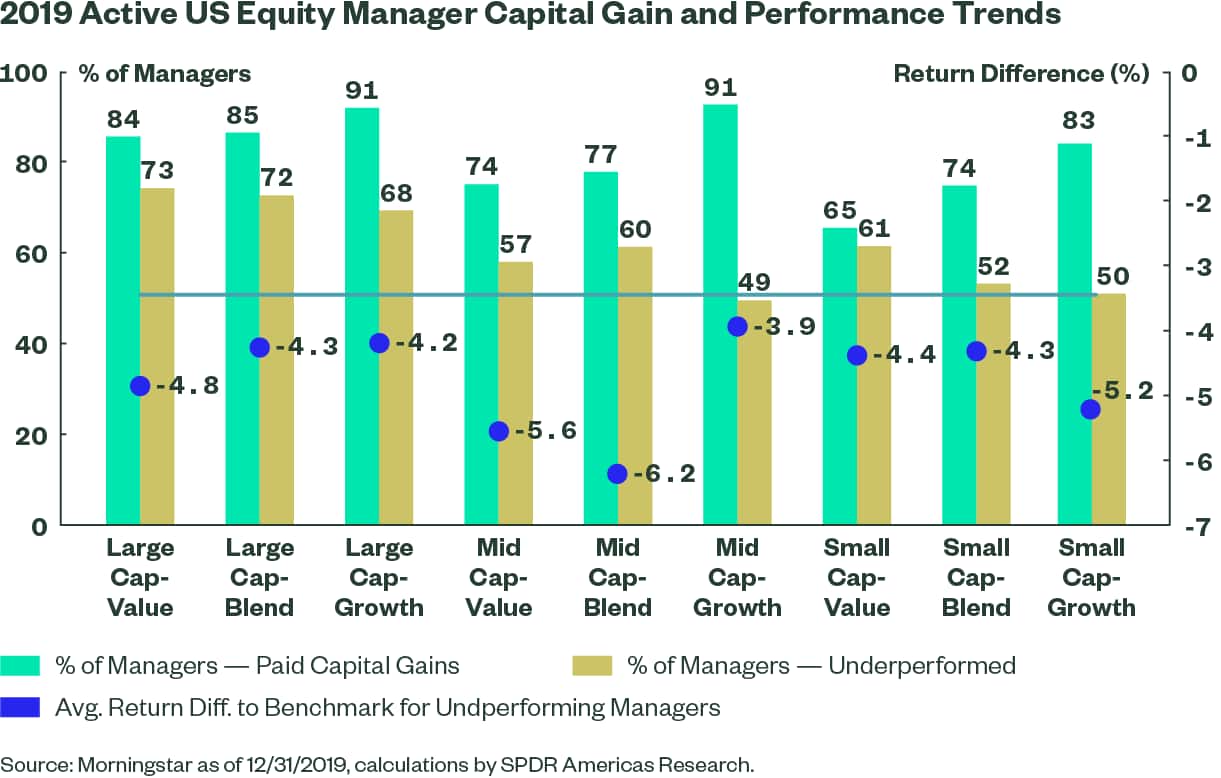 A Double Technical
Not every US active equity manager that paid a capital gain also underperformed. But, for the most part, they did – especially among large-cap managers. Across each style bucket (growth, blend, and value), more than 60% of the respective large-cap active universe underperformed AND paid a capital gain (see chart below). The other market cap styles had lower percentage amounts, but were still above 30%. Altogether, this equates to $3 trillion of assets invested in active US equity mutual fund strategies across large-, mid-, and-small-cap styles that paid both a capital gain and underperformed their benchmark. 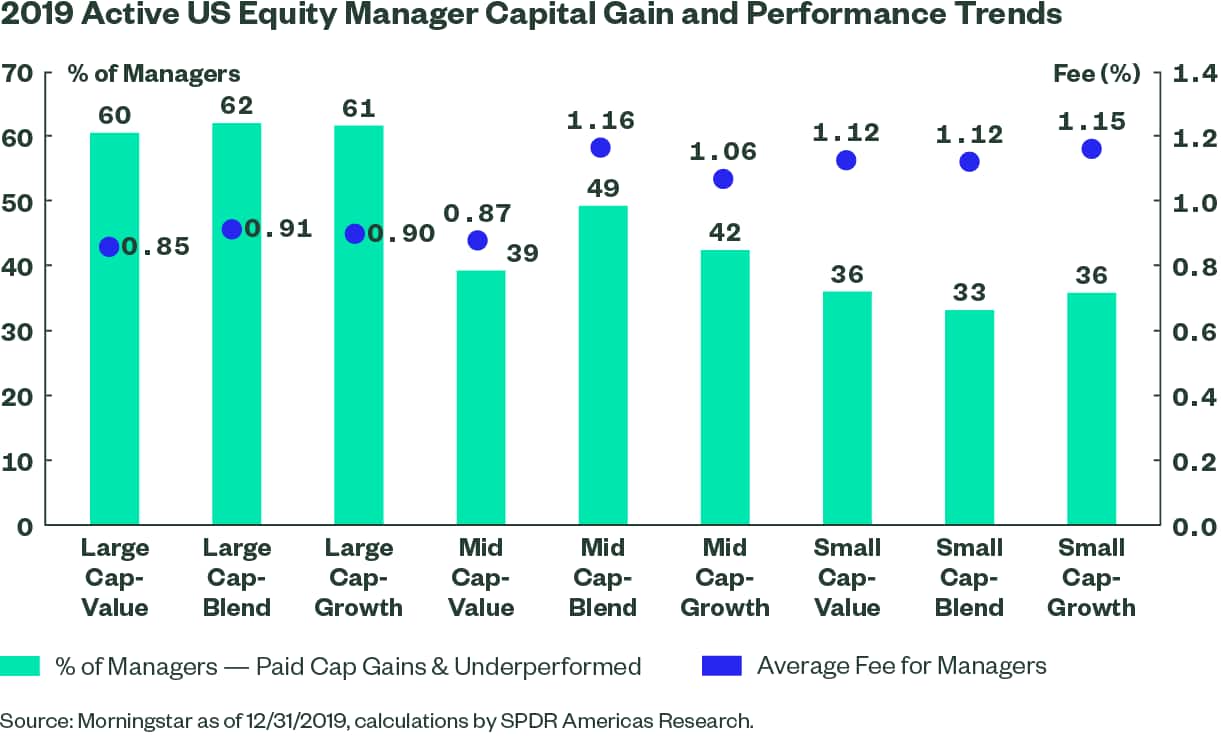 Having a high percentage of managers underperforming and then paying out a capital gain is bad enough, but throw in a high fee and it makes matters worse. It’s like getting a double technical for a hard foul then yelling the “ball doesn’t lie” after the opposing player misses the shot – only to then get another technical for that10.

For the large-cap segment, the average fee charged by the 60% of managers was approximately 90 basis points (bps), as shown above. In the mid- and small-cap space, the fees were higher, topping out at 115 bps. Given the asset levels ($3 trillion), this translates to $22 billion of fees paid last year to managers that both paid a capital gain and underperformed their benchmark by over 4% (and that doesn’t even include costs related to taxable distributions!). As an investor, that experience is likely about as fun as when I sat through the 58 loss 2006 Boston Celtics season.

Now compare this to the ETF universe of the similar US equity market styles:

Flows Don’t Lie
If proposed with the option to invest in something that charges a high fee, negatively impacts your tax bill, and also underperforms its stated goal by a wide margin vs. a lower fee, more tax efficient, and closer to benchmark performance, which one would you pick?

Investors have clearly chosen ETFs in the 2010’s, as like the ball, flows don’t lie. It’s been nothing but net for ETFs.

Expect that to continue and accelerate in the 2020’s for three reasons:

And use of model portfolios (which is actively-managed at the sector, country, regional, or asset class level).

The views expressed in this material are the views of Matthew Bartolini through the period ended January 23rd, 2020 and are subject to change based on market and other conditions. This document contains certain statements that may be deemed forward looking statements. Please note that any such statements are not guarantees of any future performance and actual results or developments may differ materially from those projected. Investing involves risk including the risk of loss of principal. Past performance is no guarantee of future results.