The Big What If: Consumers Sneeze and the US Economy Gets the Flu?

The flu is responsible for an estimated average $10.4 billion in direct medical costs and over $16 billion in lost earnings each year

This article was written with contributions from Charlotte Irwin. Charlotte is a Research Strategist on the ETF and Mutual Fund Research Team.

It’s that time of year. After relaxing holiday breaks spent visiting with family and friends, everyone’s back in the office full of unbridled optimism – and germs. And all the ensuing coughing, sniffling and shivering can mean only one thing: It’s flu season.

While the flu circulates all year, activity generally peaks from December through February. And with between 4.6 million and 6.6 million people already stricken, the CDC has warned that this season is on track to be as severe as 2017-2018, when 45 million flu cases made that season one of the deadliest in a decade. Given that the US economy has recently relied so heavily on consumer strength, too many sick days could drag on already slowing growth.

Good news, bad news
So far, the two major measures of the flu’s severity — hospitalizations and deaths — remain modest. However, the flu could spread rapidly and intensify in the coming weeks, especially because this season's flu vaccine is no match for the viral strain now dominating flu activity across the US. Even when vaccine development correctly anticipates the circulating viruses, the flu shot’s effectiveness is only about 60%. In comparison, the measles vaccine is 97% effective with two doses.1

The abnormality of this flu season is that the B strain of the virus, which typically doesn’t surface until the end of the season, is currently causing the illness in most parts of the country. More typically, the A strain of influenza dominates the early months. The upside is that strain B poses less of a danger than the more common A strain does to people 65 and older, who generally make up the majority of flu hospitalizations and deaths. However, the unusual early appearance of strain B flu has sickened many children.2 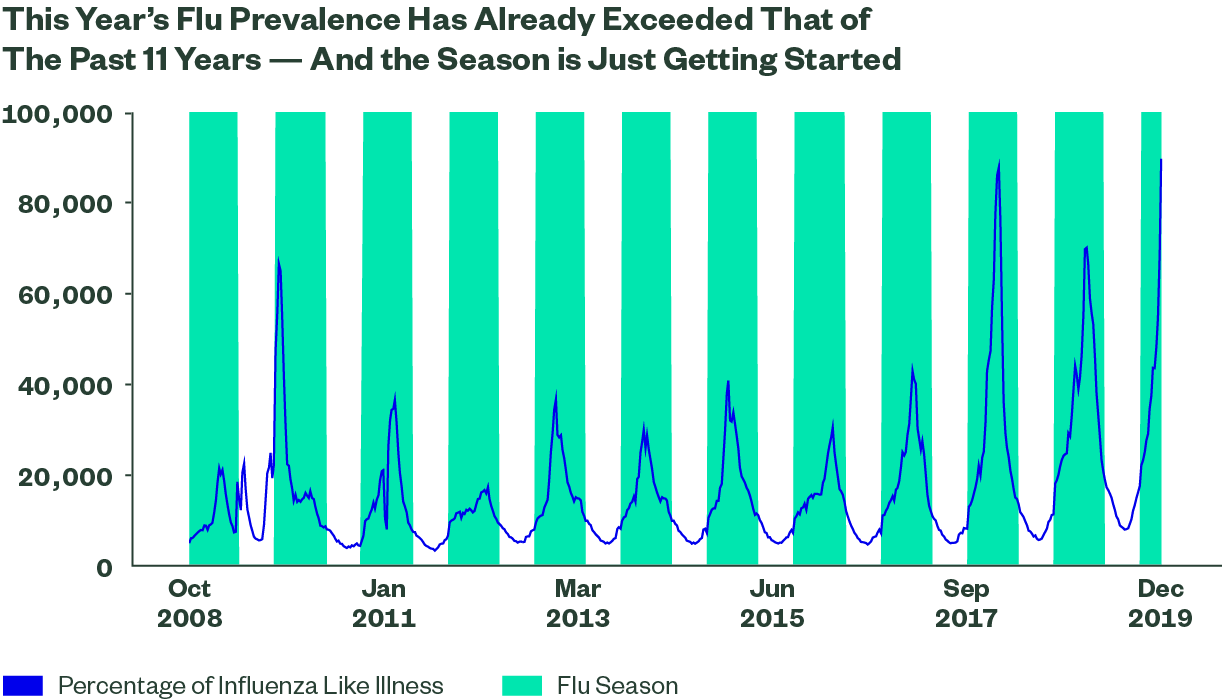 Today, between the flu vaccine, antiviral medicines developed to lessen flu symptoms, and the ever-increasing array of over-the-counter cold medications, most of us view the flu as a miserable but manageable illness. However, it is responsible for substantial mortality and loss of productivity in the US each year. The CDC reports that since 2010, the flu has resulted in 9 million to 45 million illnesses, 140,000 to 810,000 hospitalizations and 12,000 to 61,000 deaths annually.

Given that the CDC reports that roughly 60% of flu illnesses occurred within the working age (18-64) population from 2010 to 2016, lost wages and productivity are also concerns. In fact, US employees miss more than 111 million workdays a year due to the flu. Those numbers are unlikely to decline, because many adults remain unvaccinated. Vaccination coverage varies by state, according to the CDC, ranging from 33.9% to 56.3% among adults and between 46.0% and 81.1% for children.3

The most comprehensive study of the flu’s impact on the US economy was published in 2007. It found the flu responsible for an average of $10.4 billion in direct medical costs and over $16 billion in lost earnings each year. That resulted in an average total annual economic burden of more than $87 billion for the US economy. And in some years, the cost hit $150 billion.4

Pressuring the US consumer

Will the flu trigger a recession? Absolutely not. But the flu’s severity and timing could add to the pressures building on the US consumer -- especially as the flu tends to hit hardest early in the new year, after the hefty deductibles on the increasingly prevalent higher deductible insurance plans have reset.

Burdening the consumer is significant because US GDP was entirely driven by the consumer in 2019; business investment was stymied by trade and geopolitical uncertainty. Falling interest rates allowed some consumers to deleverage last year, but the rate of non-mortgage debt has risen slowly, and the six-month moving average rate of job creation has also slipped.

The Conference Board now suggests that consumers’ support for the economy is likely to fade over the course of 2020 as personal income growth slows and short-term expectations for jobs and financial prospects diminish. Therefore, unless we see a meaningful reversal in business confidence and expenditures, US growth could catch the chills.

4 “The annual impact of seasonal influenza in the US: Measuring disease burden and costs,” Vaccine, June 28, 2007.

The views expressed in this material are the views of Michael Arone through the period ended January 13, 2020 and are subject to change based on market and other conditions. This document contains certain statements that may be deemed forward looking statements. Please note that any such statements are not guarantees of any future performance and actual results or developments may differ materially from those projected. Investing involves risk including the risk of loss of principal.

All material has been obtained from sources believed to be reliable. There is no representation or warranty as to the accuracy of the information and State Street shall have no liability for decisions based on such information.
The whole or any part of this work may not be reproduced, copied or transmitted or any of its contents disclosed to third parties without State Street Global Advisors’ express written consent.