During the fourth quarter of 2020, GAL finished up in absolute returns, but underperformed its custom strategic benchmark. The fund finished the quarter with an overweight to equities while favoring US credit bonds within fixed income.

Performance
An increased allocation to equities in November was beneficial. While equity markets rose most vigorously in the wake of election results and vaccine news in early November, our addition to equities as risk appetite started to improve later in the month allowed us to take advantage of continued strong gains through the end of the year.

Elsewhere, positioning within fixed income aided performance. Our preference for credit assets at the expense of aggregate bonds helped as credit spreads continued to tighten – despite the looming expiration of certain Fed facilities. Underperformance was driven by positioning within equities and an allocation to gold. Allocations including underweights to US Small Cap and REITs hurt performance during Q4 amidst the vaccine-induced spike in value-oriented exposures and other reopening plays. Although we had moved to a net-neutral position in small cap early in October, outperformance from earlier in the quarter weighed on the Q4 results. REITs performed well along with other equities in Q4 and our large underweight had a negative impact, especially when compared to cross-asset alternatives like bonds/cash, which were flat to slightly up over the period. Gold encountered headwinds as rates started to rise on vaccine-induced optimism for economic recovery in 2021. 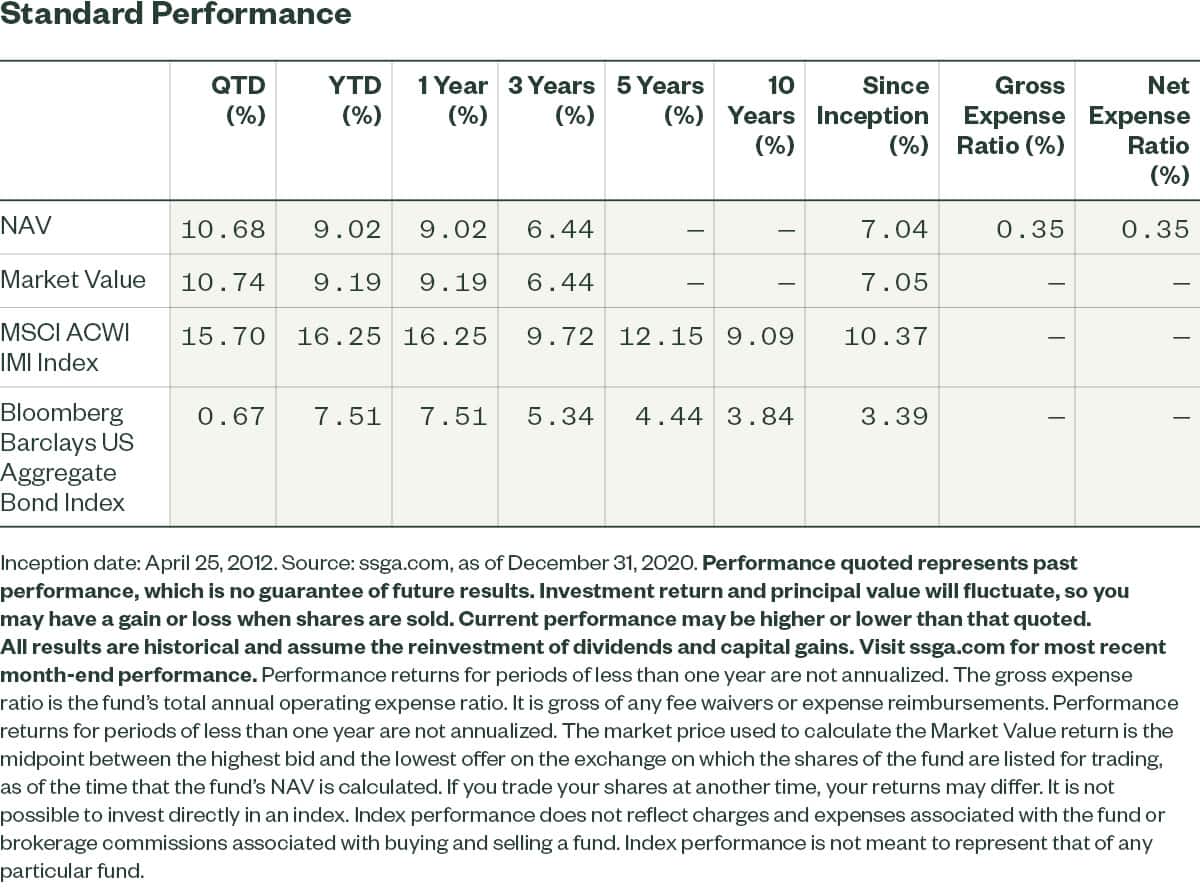 Portfolio Positioning and Outlook
We entered the quarter with a sizable overweight to equities, high yield and gold, and with a sizable underweight to government bonds. During the fourth quarter, we added to growth assets — both global equities and broad commodities — at the expense of high yield and intermediate corporate bonds. This was partially driven by our proprietary risk indicator, which eased into a more supportive regime. The addition of growth assets was also reinforced by our quantitative models, which continued to support global equities and became more favorable on commodities.

We have adopted a constructive outlook for global equities. Risk appetite has improved and could provide a tailwind for equities to continue moving higher. Valuations continue to give us some pause as many measures of value look extended. But, equities are supported by our quantitative models as improvements in price momentum and earnings sentiment coupled with positive macroeconomic factors buoy the asset class.

We continue to tilt in favor of US stocks, but we’ve also built up our exposure outside the US — particularly in Pacific and emerging markets. US equities compare favorably to other regions across all factors we evaluate, with the exception of value. Relatively better trends in earnings and sales estimates for the Pacific region have led us to a more favorable outlook for that market. And in emerging markets, a constructive risk regime, continued strength in global manufacturing, and an expectation that the US dollar is likely to be biased to the downside lend support to our overweight stance.

The potential for increased stimulus and even larger fiscal deficits seems to have awoken investors to the risks of lending at fixed interest rates over longer horizons. Even without the political dynamics, our modeling for US markets was pointing toward higher interest rates as a result of anticipated mean reversion in currently low inflation figures alongside advancing Purchasing Managers’ Index (PMI) data. Credit assets continue to look attractive, though some prior support is no longer as relevant. Yields have compressed, especially for investment grade where they no longer provide above-average return compensation. Support from the Federal Reserve has eroded to some degree, but it’s likely further support would be provided if needed. More constructively, liquidity conditions remain stable and our modeling continues to prefer credit (particularly longer-term corporates as some carry advantage remains), the yield curve is already relatively steep, and we’re in the midst of a more beneficial seasonal period for credit.

Gold has run into some speedbumps as interest rates have moved higher, but our view on gold remains positive as technicals remain firm in terms of trend identification, real yields still remain low and, if heavy government spending leads to some concern about the value of the US dollar, then gold should be in good stead on that front as well. We have adopted a more constructive tone on broad commodities. Price momentum has gained steam and there is less of a carrying cost with the average commodity futures curve having moved into a state of slight backwardation. Commodities are also likely to benefit from intermediate-term US dollar weakness, a renewed focus on infrastructure projects and continued recovery in China’s economy.

Real Estate Investment Trust (REIT)
Companies that own and operate commercial properties, such as office buildings and apartment complexes.

ETFs trade like stocks, are subject to investment risk, fluctuate in market value and may trade at prices above or below the ETFs’ net asset value. Brokerage commissions and ETF expenses will reduce returns.

Actively managed ETFs do not seek to replicate the performance of a specified index. Because the SPDR SSGA Active Asset

Allocation ETFs are actively managed, they are therefore subject to the risk that the investments selected by State Street Global Advisors may cause the ETFs to underperform relative to their benchmarks or other funds with similar investment objectives.

Asset allocation is a method of diversification which positions assets among major investment categories. Asset allocation may be used in an effort to manage risk and enhance returns. It does not, however, guarantee a profit or protect against loss.

Investing in REITs involves certain distinct risks in addition to those risks associated with investing in the real estate industry in general. Equity REITs may be affected by changes in the value of the underlying property owned by the REITs, while mortgage REITs may be affected by the quality of credit extended. REITs are subject to heavy cash flow dependency, default by borrowers and self-liquidation. REITs, especially mortgage REITs, are also subject to interest rate risk (i.e., as interest rates rise, the value of the REIT may decline).

Commodities investing entails significant risk as commodity prices can be extremely volatile due to wide range of factors.

Intellectual property information: The trademarks and service marks referenced herein are the property of their respective owners. Third party data providers make no warranties or representations of any kind relating to the accuracy, completeness or timeliness of the data and have no liability for damages of any kind relating to the use of such data.