Investing in the Potential Sweet Spot: The Case for Mid Caps

A consistent pattern of outperformance

Mid-sized firms often occupy a sweet spot, pairing much of the operational dexterity of small caps with much of the business maturity associated with large caps. This unique blend has helped mid caps generate strong absolute and risk-adjusted returns relative to both large- and small-cap stocks over multiple market cycles and across sub-investment styles (i.e., growth, value).

When we analyzed absolute returns on a five-year rolling basis since 1994 according to a monthly frequency, mid caps outperformed large caps 72% of the time and small caps 93% of the time, as shown below. Moreover, Sharpe ratios were higher in 62% and 100% of the 257 five-year rolling periods analyzed versus large caps and small caps, respectively. While the Sharpe ratio considers all volatility—both good and bad—the Sortino ratio only considers the standard deviation of the downside movements. Mid caps had higher Sortino ratios 60% and 100% of the time versus large caps and small caps, respectively. 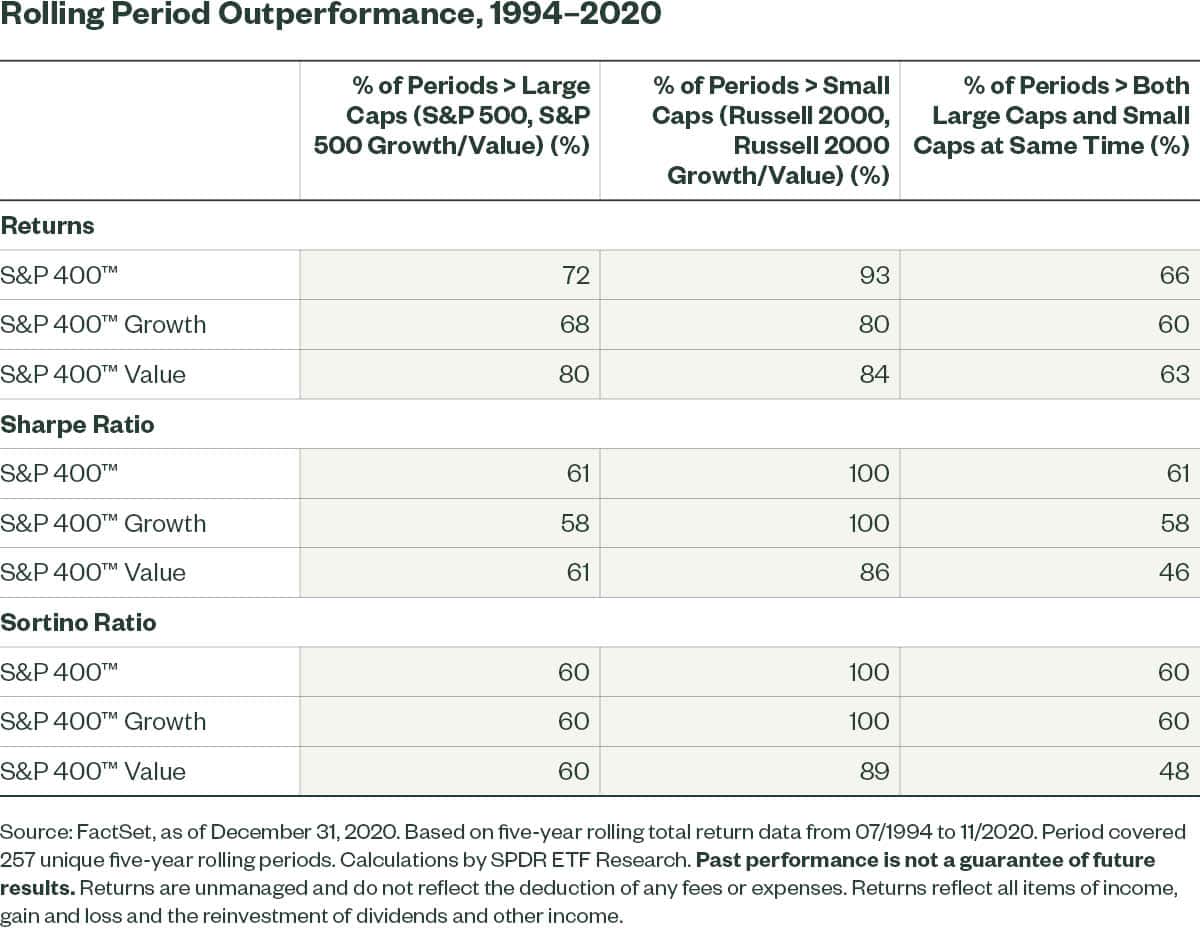 Taking a closer look at performance during major systemic risk events, our research shows that mid-cap stocks have historically experienced smaller drawdowns than either large- or small-cap stocks and also took less time to recover. These findings run contrary to two common beliefs: that shares of the largest firms hold up the best in a downturn due to their greater resources and more-mature business models; and that shares of more domestically-oriented, nimble, “risk-on” small caps are the fastest to recover after the market turns up. Our full report provides more details about our analysis of equity market performance during crises.

Often underappreciated but worth another look

Despite the unique combination of stability and growth potential offered by mid caps, market participants largely overlook the segment. Fundamental analysts focus on well-known firms with heavy media coverage and high-profile earnings reports. In fact, almost twice as many analysts, on average, cover large-cap stocks as those who cover mid-cap stocks—a trend that extends across all sectors.2 While large stocks are covered more by fundamental analysts, small stocks are more heavily researched by academics: Ten times as many research papers are written on small caps than mid caps.3 Investors may also be missing out: Only $1.2 billion is invested in pure mid-cap strategies, compared with $8.5 trillion in large caps.4

Today, savvy investors are increasingly revisiting their assumptions about mid-cap stocks. Read our latest research report to learn more about the case for investing in mid caps and key considerations for implementation.

1Small caps had higher returns than those of both mid and large caps only 6% of the time. The same analysis for large caps is 28%.
2Bloomberg Finance L.P. as of December 23, 2020, based on the average number of analysts per stock in the S&P 500, S&P 400, and Russell 2000 Indexes.
3A search on the research repository website ssrn.com, the Social Science Research Network, for the words “Small Cap” or “Small Stocks” reveals that there are 2,141 papers written on small caps. A search for “Mid Cap” or “Mid Cap Stocks” reveals 206 papers.
4Morningstar, as of December 23, 2020. Calculations per SPDR ETF Research screening out mid-cap strategies with the following non-mid-cap benchmarks: S&P 500, Russell 1000, Russell 3000, S&P 1500, S&P 1000, Russell 2500, and Russell Small Cap Completeness Indexes. The result is 175 strategies covering $77 billion of assets are removed.

Sharpe Ratio
A measure for calculating risk-adjusted returns that has become the industry standard for such calculations. It was developed by Nobel laureate William F. Sharpe. The Sharpe ratio is the average return earned in excess of the risk-free rate per unit of volatility or total risk. The higher the Sharpe ratio the better.

Sortino Ratio
A measure for calculating risk-adjusted returns that only considers the standard deviation of the downside movements.

Investments in mid-sized companies may involve greater risks than those in larger, better known companies, but may be less volatile than investments in smaller companies.

Index returns are unmanaged and do not reflect the deduction of any fees or expenses. Index returns reflect capital gains and losses, income and the reinvestment of dividends. You cannot invest directly in an index.