Charting the Market: Is the Value Rally Sustainable

One trend noted during the last two weeks of May was the 4.1% outperformance of large cap value stocks over large cap growth stocks.1 During this two-week run, value had one of its best five-day periods since 2009. But there is a caveat: These strong returns originated from a position of weakness, as growth had been leading value for some time. Overall, growth outperformed for the full month of May as end-of-month strength was not enough to overcome the 8% lead built by growth during the first 15 days of the month.

Here we take a deeper look into the recent value rally and explore whether it’s another “fit and start” or the beginning of a new trend.

Starting from a low point

As shown below, the rolling three-month performance dispersion between growth and value is currently 22%, which corresponds to the 96th percentile. Interestingly, however, this high level of dispersion is still 63% less than the all-time high dispersion of 53%, reached in 1999.

Source: Bloomberg Finance L.P. as of 05/31/2020. Past performance is not a guarantee of future results. Figures shown are based on index data and do not assume any fees. Returns based on the S&P 500 Pure Growth Index and S&P 500 Pure Value Index.

So, while the dispersion is currently high, it is not at maximum levels—and this holds true across various measures. As shown below, standard cap-weighted rolling three-month growth to value dispersion is 12% for large caps, below its max of 16%. The pure-factor weighted dispersion illustrated in the chart above is much wider in terms of magnitude, but also further from its max. This difference also holds true for mid-cap stocks. In the small-cap space, the pure-factor weighted dispersion is lower than the cap-weighted composition. The spread is still positive, however, as growth has outperformed value in every segment. 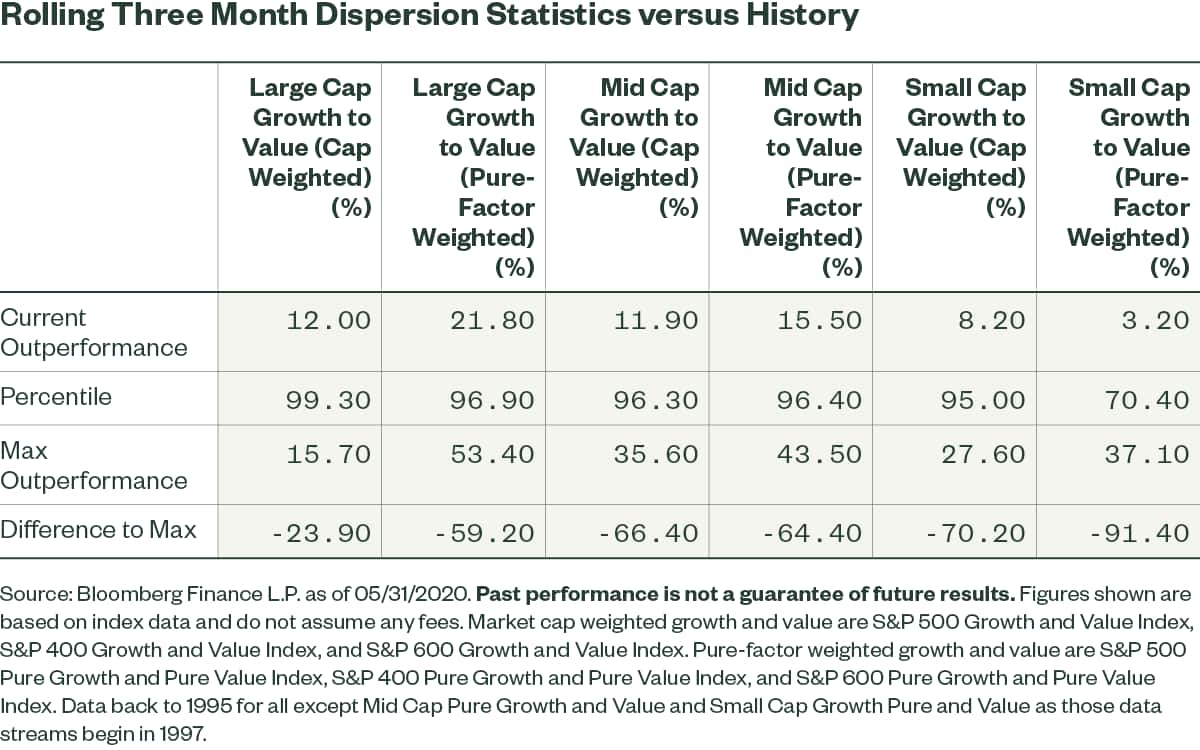 As mentioned earlier, sentiment turned in mid-May. The chart below illustrates the Z-scores of rolling five-day value outperformance versus growth over the last 25 years. As shown, there was a three standard deviation event during the five trading days between May 20 to 27—something not seen since 2009.

Source: Bloomberg Finance L.P. as of 05/31/2020. Past performance is not a guarantee of future results. Figures shown are based on index data and do not assume any fees. Pure-factor weighted growth and value are S&P 500 Pure Growth and Pure Value Index

Controlling for market cap biases reveals the same pattern. Within the large-cap and mid-cap segments, high short interest stocks have outperformed low short interest stocks. In the small-cap space, there is still a difference, though not as wide. But when only considering value exposures, the differences are similarly wide throughout—adding to the notion that the value rally has been driven by a course reversal in stocks that are heavily shorted.

Looking ahead:
In our view, we are witnessing another short-cover induced rally for value, like we saw at the end of April , when value beat growth by 4% during the last two weeks of the month then faltered out of the gates in early May. And much like other fits and starts value has experienced in recent years, the current rally may not be exceedingly sustainable unless broad-based growth resumes, and investors are no longer willing to pay up for growth if cheaper sources have emerged. In fact, in the five-day return chart above, we saw many of these spikes during 2009 as dispersion was high, given the amount of uncertainty prevalent in the marketplace.

We are likely to continue to see this type of market activity in our current environment as earnings continue to be lowered, economic growth remains poor, and humanitarian anguish stays elevated, impacting macro risk given the high probability of idiosyncratic market events.

With valuations for value stocks relative to growth becoming more attractive than usual,2  this may draw investors toward the style even if growth is not robust. The shape of the recovery, however, is still to be determined, and until then, companies with high quality balance sheets and strong growth trends may continue to do better, as they are better able to weather any undue stress than firms without those characteristics.

Investors may continue to be well-served by a high quality bias; however, given the constructive nature of valuations for value stocks—along with the elevated valuations of quality stocks—nibbling on a bit of value alongside quality may not be a bad idea. Just don’t read too much into the last few days’ returns: Value may not be back with a vengeance just yet.

Continue following SPDR® Blog to keep up with my Charting the Market series and other market insights. You can also download our full monthly Chart Pack .

1 Bloomberg Finance L.P. as of 05/31/2020, based on the S&P 500 Pure Growth and S&P 500 Pure Value Index returns from 5/15/2020 to 5/31/2020.
2 Based on a composite metric of Price-to-sales, Price-to-Earnings, Price-to-Next-Twelve-Month-Earnings, Price-to-Book, and Enterprise value-to-EBITDA for large,-mid-,and-small-caps. Large cap as defined by S&P 500 Index, Mid Cap as defined as S&P 400 Index, and Small Cap as defined as S&P 600 Index. To determine large versus mid and large versus small ratios of the fundamental metrics for Large Core, Large Value, Large Growth were compared to Mid Core, Mid Value, Mid Growth as well as Small Core, Small Value, Small Growth, respectively. To determine growth versus value, ratios of the fundamental metrics for Large Value, Mid Value, and Small Value were compared to Large Growth, Mid Growth, and Small Growth. Ratios were normalized by calculating a Z score for each. To calculate a composite score, every fundamental metrics Z score was averaged together. Based on data from 1997 to 2020.

S&P 400 Pure Growth Index
Focused on mid-caps, S&P Pure Growth Indices includes only those components of the parent index that exhibit strong growth characteristics, and weights them by growth score.

S&P 400 Pure Value Index
Focused on mid-caps, S&P Pure Value Indices includes only those components of the parent index that exhibit strong value characteristics, and weights them by value score.

S&P 500 Index
A popular benchmark for US large-cap equities that includes 500 companies from leading industries and captures approximately 80% coverage of available market capitalization.

S&P 500 Pure Growth
Focused on large-caps, S&P Pure Growth Indices includes only those components of the parent index that exhibit strong growth characteristics, and weights them by growth score.

S&P 500 Pure Value Index
Focused on large-caps, S&P Pure Value Indices includes only those components of the parent index that exhibit strong value characteristics, and weights them by value score.

S&P 600 Pure Growth Index
Focused on small-caps, S&P Pure Growth Indices includes only those components of the parent index that exhibit strong growth characteristics, and weights them by growth score.

S&P 600 Pure Value Index
Focused on small-caps, S&P Pure Value Indices includes only those components of the parent index that exhibit strong value characteristics, and weights them by value score.

The views expressed in this material are the views of SPDR Americas Research Team and are subject to change based on market and other conditions. This document contains certain statements that may be deemed forward-looking statements. Please note that any such statements are not guarantees of any future performance and actual results or developments may differ materially from those projected.

All material has been obtained from sources believed to be reliable. There is no representation or warranty as to the accuracy of the information and State Street shall have no liability for decisions based on such information.

All the index performance results referred to are provided exclusively for comparison purposes only. It should not be assumed that they represent the performance of any particular investment.

Volatility management techniques may result in periods of loss and underperformance may limit the Fund's ability to participate in rising markets and may increase transaction costs.

A momentum style of investing emphasizes securities that have had higher recent price performance compared to other securities, which is subject to the risk that these securities may be more volatile and can turn quickly and cause significant variation from other types of investments.

Investments in small-sized companies may involve greater risks than in those of larger, better known companies.

Value stocks can perform differently from the market as a whole. They can remain undervalued by the market for long periods of time.

Because of their narrow focus, sector funds tend to be more volatile.