August ETF Flows: Once More unto the Breach

In the third act of Shakespeare’s seminal play, King Henry V utters, “Once more unto the breach, dear friends, once more.” The words are intended to motivate the king’s troops amid continuous assaults on the gaps of the city walls during the siege of Harfleur. The motivation was necessary, as the weary English forces were beaten back and unsure about their prospects for victory. To forge ahead, courage and steely resolve were essential.

With the standard 60/40 portfolio sitting on current year-to-date gains against a backdrop of an elevated risk regime,1 investors may need to find a similar steely resolve today. As summer turns to fall, global capital markets face five key risks:

Asset class ETF flows: Bond funds still gaining, though record streak ends
For bond ETFs, the four-month streak of $20+ billion monthly inflows ended in August. As shown below, the asset class only took in $16 billion last month. Sizeable outflows from government funds dragged the segment lower, partially offsetting the strength in all other areas. Notably, the $16 billion figure is still above the five-year median for monthly flows of $10.5 billion.

Equity ETF flows remained somewhat constrained in August, even as the broader market rallied back to new all-time highs . The $17.3 billion inflow in August is below the five-year median figure of $20 billion. Flows into commodity funds continued to shine, led by precious metal exposures, including gold. In fact, while bond ETFs saw an end to their record streak, gold funds’ streak of more than $1 billion of monthly inflows continued in August. With an inflow of more than $2 billion last month, the record now stands at eight consecutive months.

There isn’t much to read into the sub-median equity flows for August, as the historical relationship between flows and returns is loose at best. However, the below-median flows combined with near-median trading volumes for equity ETFs and stocks in the S&P 500 in August do suggest a low-participation rally.8 This is further reinforced by low positioning in S&P 500 futures (sitting in the 12th percentile over the last five years), and high cash positions as defined by money market assets (sitting in the 92nd percentile over the last five years and just shy of the max level following the onset of the pandemic).9

Fixed income ETF flows: Strength across multiple segments
Bond ETFs have now amassed $142 billion this year. This is roughly $13 billion shy of the 2019 record, indicating that 2020’s full-year figure will likely set a new record. If we extrapolate the current year-to-date totals with the historical five-year median flow figure, the estimated full-year 2020 tally would be $183 billion. If we were to take a more aggressive approach and use the 2020 median of $19 billion, the 2020 calendar year flows could reach $220 billion. Either way, the question isn’t whether the 2019 record will be broken but by how much.

Taking a closer look at fixed income ETF flows, we see that only one bond sector had outflows in August, and six out of the eleven sectors had more than $1 billion of inflows, as shown below. The persistence of the inflows is also strong, as the same seven segments (Aggregate, Inflation Protected, Mortgage-Backed, IG Corporate, High Yield, and Municipals) all had inflows on more than 80% of the days in the last one, two, and three months. Some sectors are well north of 90%, having inflows on almost every day in the last few months. While certain segments (Aggregate, IG Corporate, and High Yield) have led in a somewhat concentrated fashion, the strength throughout the bond ETF ecosystem is a larger reflection of increasing usage across many client dimensions leveraging an array of portfolio implementation use cases. 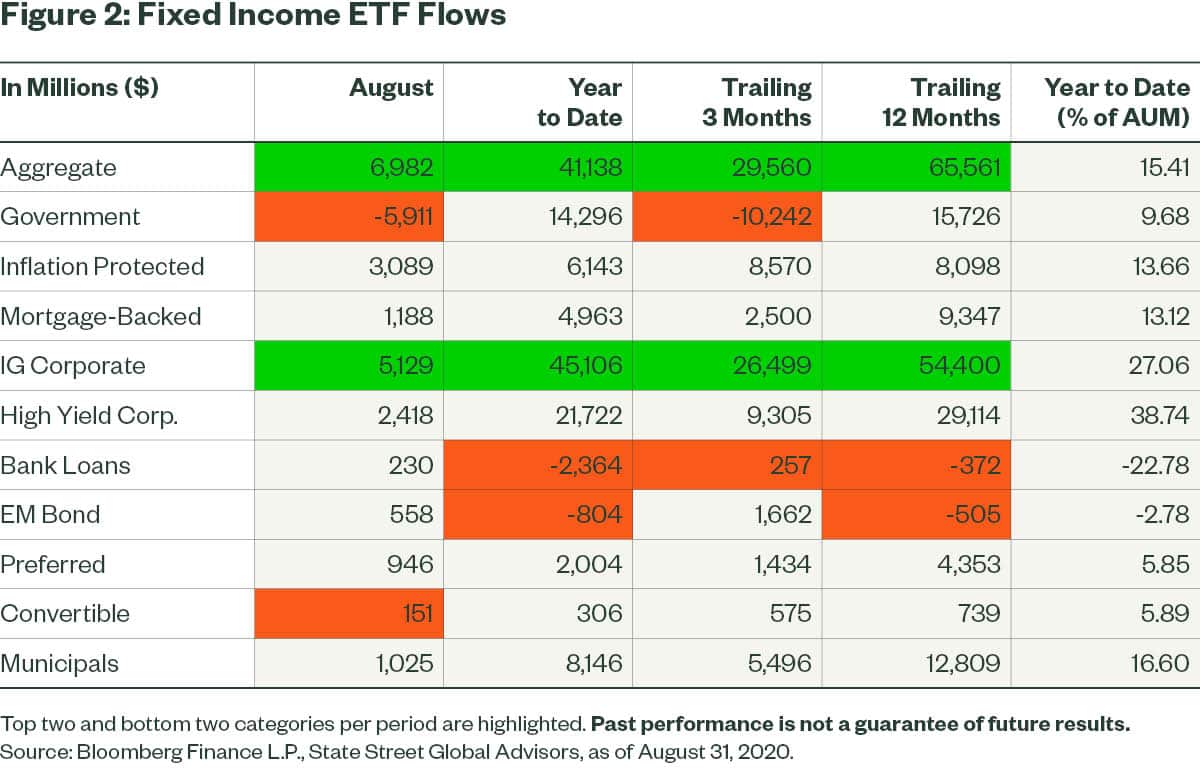 Sector flows have followed returns, to a degree. Technology, Consumer Discretionary, and Industrial stocks all outperformed the S&P 500 in August, and these three sectors had the strongest flows. Beyond that, there is little connection, as returns in the Utilities sector were down on the month, but the segment produced inflows. Short interest noticeably declined in Utilities, so perhaps the inflows were related to short covering.

Overall, as the economy continues to re-open and be on the path to recovery, cyclical sectors are likely to benefit as consumption and industrial activity rebound closer to pre-pandemic levels. The one exception would be Real Estate: The sector has historically done well during recoveries, but the pattern isn’t poised to continue, given the ways in which the pandemic has upended trends in commercial real estate, i.e., less demand for office space given the rise of at-home work arrangements.

Flows into sector funds have topped $20 billion this year, at $24 billion, and that doesn’t include the $15 billion deposited into the nontraditional thematic ETFs Those NextGen Trends funds, after posting a record $3 billion in June and July, took in over $4 billion in August. Their flows were led by funds targeting broad-based innovation, as well as strategies focused on firms creating more renewable forms of power generation. The traditional and thematic flows reflects specific investor behavior trend in 2020 – harnessing elevated dispersion and discretely positioning sectors based on market trends rather than indiscriminately buying broad beta

Looking ahead, investors may need steely resolve
As investors go once more unto the breach in a tumultuous 2020, fortitude may be necessary. Three potential tactics are worth considering as we forge ahead:

S&P 500 Index: A stock market index that measures the stock performance of 500 large companies listed on stock exchanges in the United States.

The whole or any part of this work may not be reproduced, copied or transmitted or any of its contents disclosed to third parties without SSGA, AL’s express written consent.