US Policy Watch: Strong Fiscal Impulse, But No Inflation in Sight

The Biden administration’s policy path is primarily fiscal in nature with the US$1.9 trillion “American Rescue Plan” constituting the core of that plan. However, this coupled with a fiscal deficit of 15.8% of GDP in 2020 and a further deficit of 10% expected for 2021 has raised the specter of inflation. Yet, future inflation should be determined by the depth of the pandemic recession and upcoming fiscal plans, not the current ones.

Ahead of the US presidential election, the latter half of 2020 was full of “blue wave” investment themes, mainly on the back of expected easy fiscal policy. Thus far, this has largely turned out to be prescient, with the most market effective policy initiative deemed to be the anticipated passage of another relief bill in March. This supports the broader narrative of a strong economic recovery on the back of vaccine deployment. However, there are few substantive reasons to believe the current fiscal policy measures alone will trigger an inflationary rise. Such a scenario would require future fiscal easing beyond current plans, which should mean the backdrop for risk assets remains favorable, albeit partially priced in.

The IMF aka It’s Mainly Fiscal

The core policy plank is continued fiscal support to help the US economy gather escape velocity from the pandemic. Given parliamentary majorities and Republican positioning for the 2022 midterms, congressional reconciliation is the preferred pathway. This should lead to a wider fiscal path given that the Democratic consensus is for a more expansionary policy.

The first measure is the current “American Rescue Plan” of US$1.9 trillion, which comes on the heels of a fiscal deficit of 15.8% of GDP in 2020, thus setting our expectations for a deficit of around 10% of GDP in 2021. Given the widespread view of a strong economic recovery, these deficits are raising worries about inflation. Figure 1 illustrates the rapid increase in market pricing of future inflation, with 10-year breakevens as well as 5-year, 5-year forward yields recovering quickly from their all-time lows in 2020 to five-year highs. 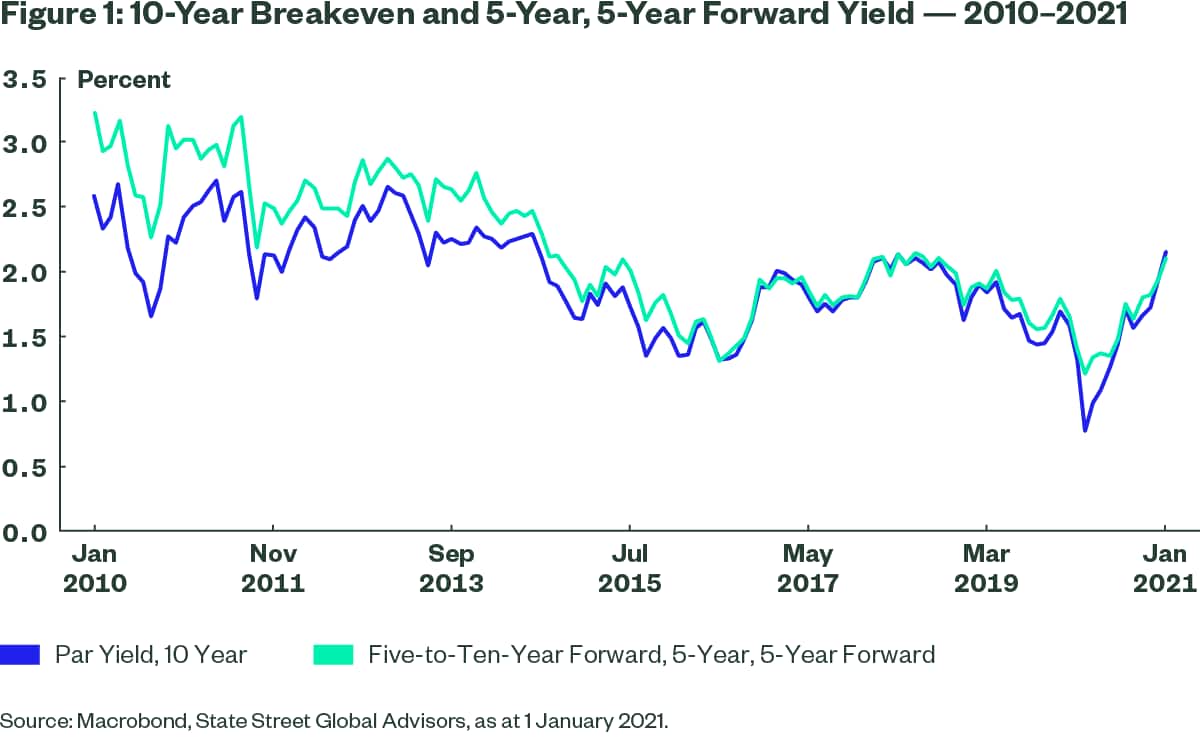 We would be cautious about overinterpreting these market signals as predictors of future inflation. First, they are now just back near the average of the past decade, implying a normalization of the economy post-pandemic. Second, they could reflect particular supply-demand dynamics in the US Treasury market given the large increase in future issuance and selective maturity purchases by the US Fed. And third, the level of precautionary savings remains very high and past recessions show that a portion of excess savings remains sticky even after the crisis moment has passed, feeding back into financial assets including bonds.

Given that the monetary policy stance is unlikely to change much this year, the key remains to closely keep track of fiscal developments. On this front, we currently only have a draft of the impending relief bill, which, on its own, is unlikely to trigger an inflationary cycle.

Prospects of an Inflationary Cycle

Figure 2 shows the breakdown of President Joe Biden’s relief bill, with differential shadings indicating potential inflationary contributions. The turquoise components can hardly be deemed as contributors: aid to state and local governments is largely going to support pandemic recovery efforts as well as sustain employment, not create additional consumption. Similarly, unemployment benefits only apply to the unemployed. There remains substantial labor slack to be absorbed prior to seeing an inflationary bounce, so if the labor market indeed recovers that quickly, these benefits would not apply and would not enter the economy. The other turquoise components apply to actual spending to engineer the escape from the pandemic, whether that is related to vaccines, the healthcare system, the reopening of schools, education for all age groups or supporting transit systems to cope with loss of ridership. None of these measures enhance consumption demand but rather fill demand gaps or are specific crisis spending measures.

In contrast, although the dark-blue components could be construed as stimulants that may boost consumption, together they barely amount to US$800 billion – a sizable impetus of roughly 4%, but nothing extraordinary. Moreover, even these components include elements that are demand substitutes, not add-ons. The more targeted the measures are designed, the more they will simply be filling demand gaps for strained balance sheets, particularly the stimulus checks.

Hence, future inflation will be determined by the depth of scarring from the pandemic recession and upcoming fiscal plans, not the current ones. With that in mind, Democratic fiscal plans include substantial tax rises, particularly on corporations as well as high-income households. In addition, the next large boost to public spending is designed to address infrastructure gaps. If the US fiscal trajectory pursues this route, inflation is neither imminent nor would take off in the future even when the output gap is closed.

The macro backdrop remains favorable for risk assets, particularly equities, capturing the upside of the recovery. The biggest risks continue to be virus-related and a potential vaccine failure. The secondary risk of an early inflationary breakout seems overstated and is not based on existing fiscal plans, despite high deficit levels. In practice, US real yields will stay low for longer, contributing to US dollar weakness in the near term. The post-crisis equilibrium from 2022 onward may look different, but only future data points will indicate the precise direction. For today, the rosy market consensus endures.

The views expressed in this material are the views of Elliot Hentov through 17 February 2021 and are subject to change based on market and other conditions. This document contains certain statements that may be deemed forward looking statements. Please note that any such statements are not guarantees of any future performance and actual results or developments may differ materially from those projected.

Investing in foreign domiciled securities may involve risk of capital loss from unfavourable fluctuation in currency values, withholding taxes, from differences in generally accepted accounting principles or from economic or political instability in other nations. Investments in emerging or developing markets may be more volatile and less liquid than investing in developed markets and may involve exposure to economic structures that are generally less diverse and mature and to political systems which have less stability than those of more developed countries.