“The government can always rescue the markets or interfere with contract law whenever it deems convenient with little or no apparent cost. (Investors believe this now and, worse still, the government believes it as well. We are probably doomed to a lasting legacy of government tampering with financial markets and the economy, which is likely to create the mother of all moral hazards. The government is blissfully unaware of the wisdom of Friedrich Hayek: ‘The curious task of economics is to demonstrate to men how little they really know about what they imagine they can design.’)”

More than a decade later, the beat goes on. Massive government deficits financed by bloated central bank balance sheets continue to tamper with financial markets and the economy. This isn’t your great-granddaddy’s capitalism. Damn, it’s not even your granddad’s version. Hell, even your own father probably wouldn’t recognize it. In today’s capitalism, everyone gets bailed out in a crisis. And I mean everyone ─ airlines, small businesses, so-called fallen-angel bonds ─ and now, the US government is even considering aid for the battered oil industry. So much for the good old days of caveat emptor, let the buyer beware. Last time I checked, running a business, extending credit to issuers of junk bonds and drilling for oil were supposed to be risky propositions.

Not to worry, I get the strange irony in my logic. The chief investment strategist from a systemically important financial institution (SIFI), employed by an industry notorious for being shamefully bailed out during the global financial crisis (GFC) is now whining about moral hazard? C’mon, man! But, folks that read Uncommon Sense regularly and have had the opportunity to hear me speak about moral hazard know that I have been railing against government and central bank interference in markets and the economy for a very long time. Perhaps during a crisis ─ especially one not of our own making, such as the COVID-19 pandemic ─ bailouts are the humane thing to do. However, they come with some very serious, long-lasting consequences.

Waste Not, Want Not?

In November 2008, a few short weeks after accepting the appointment of White House chief of staff for President Barack Obama, Rahm Emanuel famously said, “You never let a serious crisis go to waste. And what I mean by that is it's an opportunity to do things you think you could not do before.” Boy, has Jay Powell, current chairman of the Federal Reserve (Fed) ever taken that advice to heart. He is not to be outdone by The Maestro Alan Greenspan’s policy response to the bursting of the technology, media and telecom (TMT) bubble. Or bested by Helicopter Ben Bernanke’s approach to conquering the GFC. Bazooka Jay and his merry band of monetary policymakers have unleashed the greatest and most creative crisis policy response in the history of central banking.

There aren’t enough superlatives to describe what the Fed has done to combat the negative market and economic consequences from the  COVID-19 pandemic. The monetary policy playbook that was created in the aftermath of the GFC paved the way for Powell and future central bank leaders. It’s granted them permission to implement once unimaginable policy solutions. In fact, it’s put monetary policymaking on steroids. Bernanke only talked about dropping money from helicopters. Powell in partnership with Treasury Secretary Mnuchin has practically done it! This evolving new approach to monetary policy during a crisis may never be walked back.

Please don’t get me wrong. Ballooning central bank balance sheets during the GFC and today’s coronavirus-induced recession have played a crucial role in providing much needed liquidity to capital markets, while also helping to stabilize the broader economy. The Fed’s fast responses and aggressive policies have importantly ensured the smooth functioning of the credit markets. In addition, its swift actions have likely saved countless jobs and businesses. These are all noble and admirable results from the Fed’s experimental monetary policies. Perhaps, like you, I will be forever grateful to the Fed for its courage to pursue extraordinary actions in truly unprecedented times.

However, like the saying goes, no good deed goes unpunished. My ongoing gripe with the Fed and other central banks relates to their willful blindness and repeated claims of ignorant bliss regarding some of the longer-term harmful impacts of their policies. See no evil, hear no evil is the Fed’s new motto. Central bank policies may have prevented something worse from happening in the markets and the economy (i.e., an economic depression), but they have done precious little to reaccelerate economic growth rates and reignite inflationary pressures.

To the contrary, exploding government deficits, financed by rapidly increasing central bank balance sheets depresses economic growth, lowers interest rates and stifles inflation. When the dust finally settles from the COVID-19 pandemic, the US government deficit will be nearly
$4 trillion and the Fed’s balance sheet will have soared to roughly $10 trillion. Not all that long ago, figures of this magnitude would have been dismissed as utterly ridiculous.

If I praise the Fed for taking courageous action during times of crisis, then I must be willing to criticize the Fed for cowardly inaction in more sanguine economic environments. Examining both interest rates and the money supply during the blossoming recovery from 2010 to 2016 finds that monetary policy remained very accommodative throughout that period. It wasn’t until 2018 that the Fed started to tighten the reins on financial conditions. However, a fourth-quarter stock market crash that year caused policymakers to quickly reverse course to much easier monetary conditions. 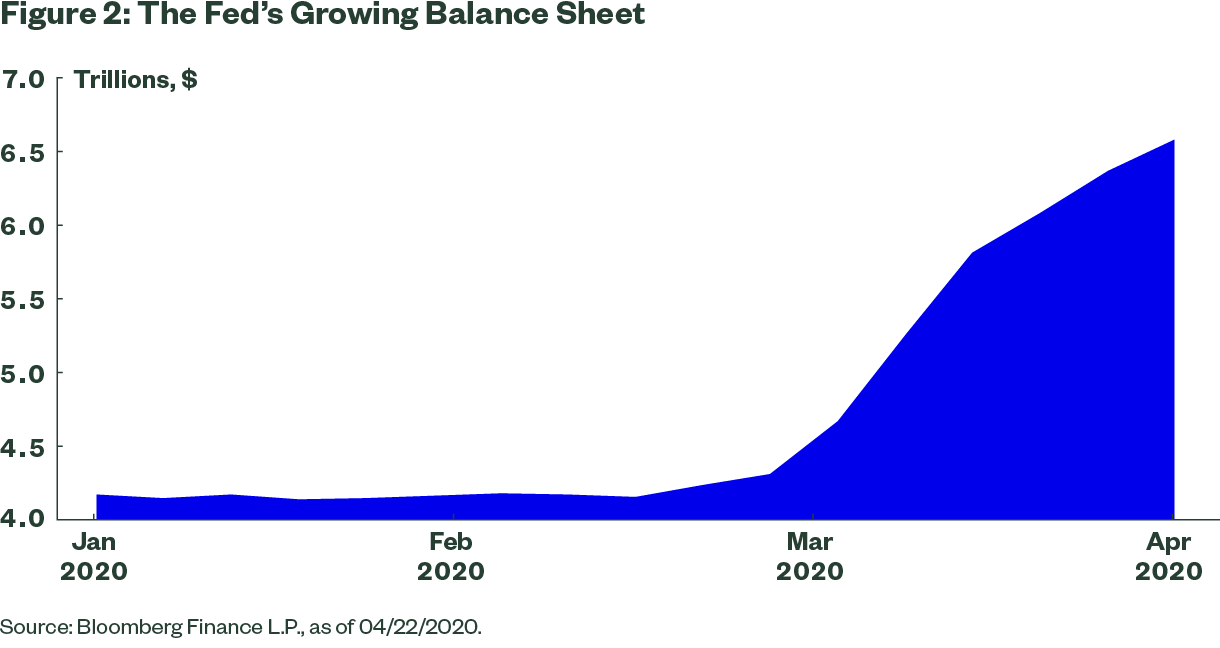 In the wake of the Fed now spending wildly to save the economy from depression, Michael Gayed points out in the April 25 “Lead-Lag Report” that Japan has shown there are diminishing marginal returns to excess liquidity in the system. Even as it increases spending to combat the pandemic, Gayed says the Fed knows that massive spending likely will have less of an impact on the overall economy.

Meanwhile, by shirking its responsibilities to tighten conditions in good times and relentlessly backstopping markets in times of stress, the Fed has likely encouraged excessive investor risk- taking that could lay the groundwork for future asset price bubbles.

The Fed Put is alive and well. And by expanding new Fed programs to include munis, corporates, fallen angels and junk bond ETFs, the Fed Put is bigger, badder and broader than ever.

Bazooka Jay’s Midas Touch
Throughout history, there are so many tales and legends describing fruitless attempts to turn base metals like lead into gold. Yet Chairman Powell may just be the modern-day alchemist with the golden touch of King Midas. You see, the Fed’s new lending programs have magically transformed once risky bonds such as corporates, fallen angels and even junk bond ETFs into risky bonds that are now implicitly backed by the Federal Reserve. Voila!

With 10-year US Treasuries yielding a miserly 0.6% as of April 28, income-starved investors such as pensioners, retirees and savers don’t have many low risk options to generate much needed income in their portfolios. Or do they? Formally risky bonds suddenly appear to be less risky. Strangely, this is occurring while the economy is entering recession, corporate profits are plummeting and job losses are skyrocketing. The disconnect between the underlying fundamentals of bond issuers and bond prices is tough to reconcile for even the shrewdest credit investor.

Not surprisingly, many investors continually struggle with how to allocate their fixed income investments in diversified portfolios. I can’t believe I’m writing this, but unfortunately, this is what it’s come down to — despite the deteriorating fundamentals in credit markets, investors may be forced to hold their noses and purchase previously risky segments of the bond market, such as corporates, fallen angels and junk bonds. Holding your nose is never a comfortable starting position for any investment decision. But the Fed, a deep-pocketed buyer of these risky bonds, doesn’t care about price or crumbling fundamentals. Don’t hate the player, hate the game! Yields for these bonds are likely to fall, lifting prices, and credit spreads relative to Treasuries may continue to tighten, further boosting total returns. Welcome to the bizarre new world of fixed income investing courtesy of the many new Fed programs.

It’s a very slippery slope. The Fed Put has been activated for every crisis since at least Black Monday in October 1987. For more than three decades, investors and the Fed have entered into a gentlemen’s agreement. You got my back and I have yours. For the most part, it has worked brilliantly to everyone’s benefit. The Fed’s superhero powers have provided much needed liquidity in times of stress, ensured the smooth functioning of capital markets and saved countless jobs and businesses during economic downturns. All commendable achievements.

However, with each new crisis, the stakes get higher as the monetary policy responses get bigger, bolder and broader. The policy playbook created in the aftermath of the GFC has granted central bankers permission to go even farther to combat the severe negative impact from the COVID-19 pandemic. And, Bazooka Jay and central bankers everywhere have stepped up to the challenge, creating unprecedented new programs to support markets and the economy.

Yet, government deficits funded by massive central bank balance sheets have distorted markets and the economy. Also, the Fed’s failure to reduce monetary policy accommodation in better economic times has likely encouraged investors to take excessive risks, laying the groundwork for future asset price bubbles. Today, confused investors look across a broad spectrum of investment choices that have been completely distorted by fiscal and monetary policies. The disconnect between an investment’s underlying fundamentals and its price make investors uneasy. As a result of the Fed’s new programs, this tension is now most evident in the credit markets. Sadly, investors may have no choice but to dive in.

Basis Point One hundredth of one percent, used chiefly in expressing differences of interest rates.

The views expressed in this material are the views of Michael Arone through the period ended April 28, 2020 and are subject to change based on market and other conditions. This document contains certain statements that may be deemed forward looking statements. Please note that any such statements are not guarantees of any future performance and actual results or developments may differ materially from those projected.

Standard & Poor’s®, S&P® and SPDR® are registered trademarks of Standard & Poor’s Financial Services LLC (S&P); Dow Jones is a registered trademark of Dow Jones Trademark Holding LLC (Dow Jones); and these trademarks have been licensed for use by S&P Dow Jones Indices LLC (SPDJI) and sublicensed for certain purposes by State Street Corporation. State Street Corporation’s financial products are not sponsored, endorsed, sold or promoted by SPDJI, Dow Jones, S&P, their respective affiliates and third party licensors and none of such parties make any representation regarding the advisability of investing in such product(s) nor do they have any liability in relation thereto, including for any errors, omissions, or interruptions of any index.
State Street Global Advisors Funds Distributors, LLC, member FINRA, SIPC.
© 2020 State Street Corporation.