Central banks have returned to Great Financial Crisis (GFC)-era monetary stimulus tools to reassure the market and inject much-needed liquidity. While the COVID-19 global pandemic is unprecedented, the policy responses are similar, and insights can be gleaned from the past. Following the GFC, inflation began increasing as a result of the stimulus measures – averaging 2.4% from 2009 until 2012 – after a demand-driven deflation shock began in 2008. One could reasonably expect the same trend today – given the potential for the price tag of the monetary and fiscal stimulus plans (approximately $6 trillion)1 to fuel an economic rebound2 later in the year, once the COVID-19 curve has flattened. Therefore, investors may consider potential relative value opportunities in the rates markets, swapping nominal US Treasuries for inflation-protected Treasuries – legging into the trade over the next quarter, as data have yet to reflect the demand-driven deflation shock. 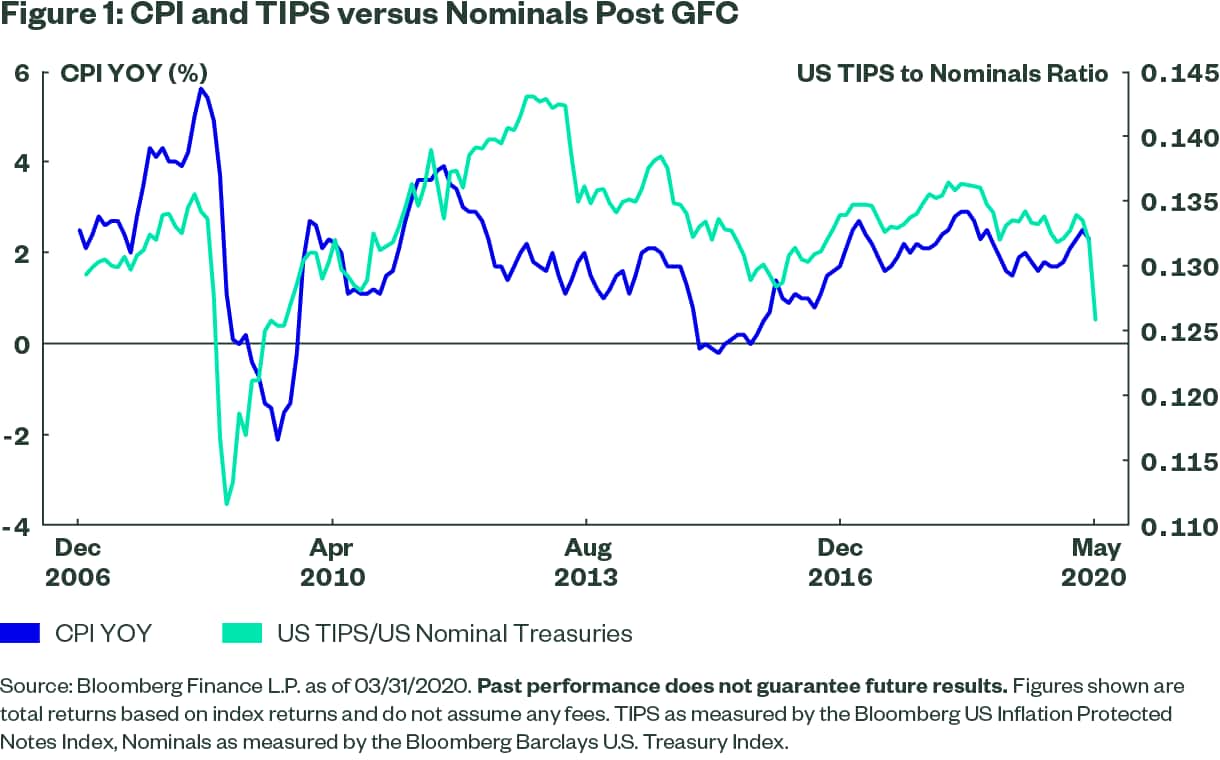 As shown above, as inflation rose post the GFC crisis, Treasury Inflation-Protected Securities (TIPS) began to outpace nominal US Treasuries. From mid-2009 through 2012, TIPS outperformed nominals in 60% of the months, by an average of 30 basis points.3 Outside of any ability to go long/short, swapping nominal exposure for TIPS may be the most efficient way to capture this premium – either completely or through a blend (i.e., 50%/50%). Adding TIPS without reducing nominal exposure may unintentionally extend a portfolio’s duration profile and dilute the potential relative value opportunity, as duration effects will be the predominant driver of risk and return of this trade. After all, TIPS are still bonds.

The Wall Street mantra “Don’t fight the Fed” refers to the notion that investors can do well by investing in a way that aligns with current monetary policies of the Federal Reserve (Fed). 4 To counter the current crisis, the Fed will be purchasing agency mortgage-backed securities (MBS) as stimulus tools, similar to what it did in the GFC. While the initial purchase amount was set at least $200 billion, a March 23 release indicated that the Fed would buy what is needed to support the economy. In other words, the Fed will conduct unlimited quantitative easing (QE). 5 Beyond having a large, constant buyer that will likely support a steady “bid” on the asset class, MBS have a structurally unique yield per unit of risk exposure, as shown below, that may prove beneficial in today’s uncertain environment. 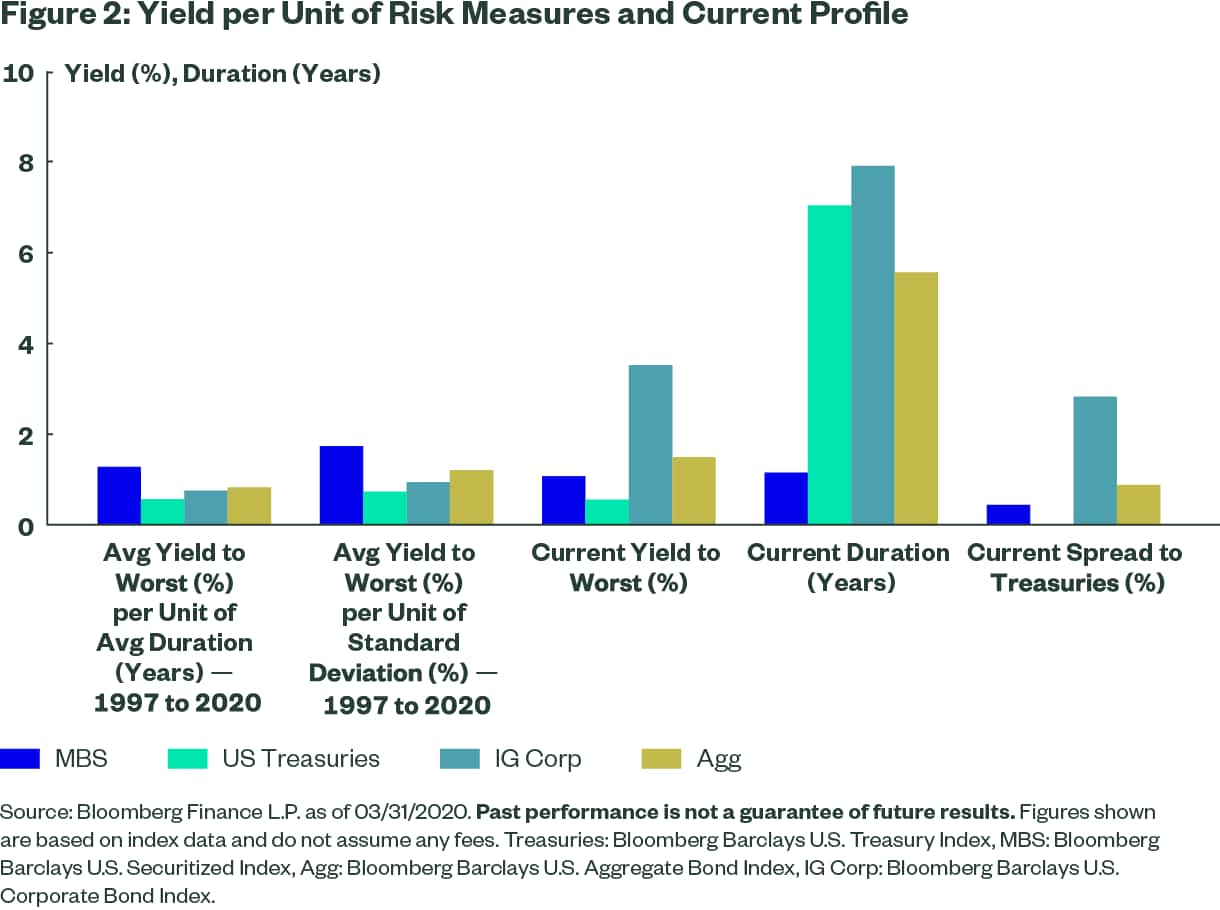 Although the GFC was a housing-related crisis, agency MBS (+20.3%) actually outperformed US Treasuries (+19.6%), the Agg (+19.3%), and IG Corporates (+18.0%) with less drawdown risk,6 as default risks were, and still are, negligible. 7 The GFC returns shown above should diminish any concern over how a downturn in the housing market could impact the agency MBS market during the current crisis. Moreover, since volatility spiked, agency MBS (+2.2%) have outperformed the Agg (+0.8%) and IG Corporates (-7.1%).8 As we venture further into an uncertain 2020, follow the Fed’s plan on asset purchases; an overweight to MBS in broad portfolios may help to balance risk (rate and credit) in the hunt for yield.

Part of the Fed’s stimulus arsenal to combat the current crisis is to extend liquidity and capital to corporate borrowers by purchasing individual bonds of US investment-grade-rated firms with a maturity of five years or less as well as broad corporate bond ETFs. Back-of-the-envelope math using the Fed’s outlined constraint of being able to purchase only 20% of an ETF’s assets indicates that roughly $30 billion of corporate bond fixed income ETFs could be purchased9 – meaning that $220 billion of short-term corporate bonds could be bought.10 Similar to agency MBS, short-term corporate bonds will have the Fed supplying a supportive bid. As shown below, relative to other parts of the credit curve, the short-term segment witnessed a larger relative increase in spreads during recent volatility – but also snapped back faster following the Fed’s asset purchase announcement.

Broad investment-grade corporate bonds posted their worst quarterly loss since 2008. And looking ahead to the next two quarters, risks are skewed to the downside – even with the supportive stimulus actions – given that we are likely to see an uptick in rating downgrades, depressed earnings, and weak economic data. While ETF purchases are likely to support broader tenors, the more sizable and targeted stimulus actions will have a greater impact on the short end. As a result, allocating alongside the Fed and overweighting the short-term segment may help to balance yield and credit risks within a portfolio’s corporate exposure, particularly if future stresses emerge and the size of the program increases.

1 “Kudlow Projects Coronavirus Aid Package to Reach ‘Roughly’ $6 Trillion”, National Review 3/24/2020.
2 Economic forecasts indicate negative growth in Q1 and Q2 and a rebound in Q3, based on consensus economic estimates, Bloomberg Finance L.P. as of 03/31/2020.
3 Bloomberg Finance L.P. as of 03/31/2020, calculations by SPDR Americas Research.
4 What is the Meaning of 'Don't Fight the Fed'? www.thebalance.com.
5 “Fed Unveils Unlimited QE and Aid for Businesses, States”, Bloomberg 3/23/2020.
6 Bloomberg Finance L.P. Performance from 12/31/2007 to 12/31/2009 as measured by the performance of the Bloomberg Barclays US Securitized Index (MBS), Bloomberg Barclays US Treasury Index (US Treasuries), Bloomberg Barclays US Aggregate Bond Index (the Agg), and the Bloomberg Barclays US Corporate Bond Index (IG Corporates). Drawdowns during the period were (-4.2%, -7.2%, -5.1%, and -16.0% respectively).
7 Agency MBS either have the explicit backing of the federal government (Ginnie Maes) or the implicit backing from the government-sponsored entities (GSEs) Fannie Mae and Freddie Mac.
8 MBS +2.2%, Agg +0.8%, IG Corporates -7.1% per Bloomberg Finance L.P. as of 03/31/2020 from 2/21/2020 to 3/31/2020.
9 Calculations based on removing any active, non-US focused corporate bond ETFs then applying a 20% constraint to the current asset levels.
10The program is the Federal Reserve Secondary Market Corporate Credit Facility (SMCCF), and has $25 billion of capital allocated by the US Treasury. The Fed can, however, lend roughly ten times what it holds in collateral for non-government securities, meaning the size of the program could be as large as $250 billion.

Basis Point (bps)
A unit of measure for interest rates, investment performance, pricing of investment services and other percentages in finance. One basis point is equal to one-hundredth of 1 percent, or 0.01%.

Bloomberg Barclays Long U.S. Corporate Index
A benchmark designed to measure the performance of U.S. corporate bonds that have a maturity of greater than or equal to 10 years.

Bloomberg Barclays U.S. Treasury Bond Index
A benchmark of US dollar-denominated, fixed-rate, nominal debt issued by the U.S. Treasury. Treasury bills are excluded by the maturity constraint, but are part of a separate Short Treasury Index.

Bloomberg Barclays U.S. 1–3 Year Corporate Bond Index
A benchmark designed to measure the performance of the short-term U.S. corporate bond market. It includes publicly issued US dollar-denominated and investment-grade corporate issues that have a remaining maturity of greater than or equal to one year and less than three years.

Credit Spreads
The difference in yield between a U.S. Treasury bond and a debt security with the same maturity but of lesser quality.

Drawdown
A specific decline in the stock market during a specific time period that is measured in percentage terms as a peak-to-trough move.

Global Financial Crisis (GFC)
The economic upheaval of 2007-2009 that is generally considered the largest downturn since the Great Depression of the 1930s. The GFC was triggered largely by the sub-prime mortgage crisis that led to the collapse of systemically vital US investment banks such as Bear Stearns and Lehman Brothers. An aggravating factor was the speculative spike in energy that lifted oil prices to almost $150 a barrel in the summer of 2008, and which surely contributed to the economic slowdown.

Investment-Grade Credit
A fixed-income security, such as a corporate or municipal bond, that has a relatively low risk of default. Bond-rating firms, such as Standard & Poor’s, use different lettered descriptions to identify a bond’s credit quality. In S&P’s system, investment-grade credits include those with ‘AAA’ or ‘AA’ ratings (high credit quality), as well as ‘A’ and ‘BBB” (medium credit quality). Anything below this ‘BBB’ rating is considered non-investment grade.

Liquidity
The degree to which an asset or security can be bought or sold in the market without affecting the asset’s price. Liquidity is characterized by a high level of trading activity.

Quantitative Easing, or QE
An extraordinary monetary policy measure in which a central bank buys government fixed-income securities to lower interest rates, encourage borrowing and stimulate economic activity. Quantitative easing is considered when short-term interest rates are at or approaching zero, and does not involve the printing of new banknotes. Quantitative easing increases the money supply by flooding financial institutions with capital in an effort to promote increased lending and liquidity.

TIPS, or Treasury Inflation Protected Securities
Treasury inflation protected securities (TIPS) refer to Treasury securities that are indexed to inflation in order to protect investors from the negative effects of inflation. TIPS are backed by the US government and are thus considered an extremely low-risk investment. The par value of TIPS rises with inflation, as measured by the Consumer Price Index, while the interest rate remains fixed.

Treasuries
The debt obligations of a national government. Also known as "government securities," Treasuries are backed by the credit and taxing power of a country, and are thus regarded as having relatively little or no risk of default.

The information provided does not constitute investment advice and it should not be relied on as such. It should not be considered a solicitation to buy or an offer to sell a security. It does not take into account any investor’s particular investment objectives, strategies, tax status or investment horizon. You should consult your tax and financial advisor. All information is from SSGA unless otherwise noted and has been obtained from sources believed to be reliable, but its accuracy is not guaranteed. There is no representation or warranty as to the current accuracy, reliability or completeness of, nor liability for, decisions based on such information and it should not be relied on as such.

The views expressed in this material are the views of Matthew Bartolini through the period ended April 14th, 2020 and are subject to change based on market and other conditions. This document contains certain statements that may be deemed forward-looking statements. Please note that any such statements are not guarantees of any future performance and actual results or developments may differ materially from those projected.

BLOOMBERG®, a trademark and service mark of Bloomberg Finance L.P. and its affiliates, and BARCLAYS®, a trademark and service mark of Barclays Bank Plc, have each been licensed for use in connection with the listing and trading of the SPDR Bloomberg Barclays ETFs.
The whole or any part of this work may not be reproduced, copied or transmitted or any of its contents disclosed to third parties without SSGA’s express written consent.