Japanese Prime Minister Yoshihide Suga has announced that he will not run for the ruling Liberal Democratic Party’s (LDP) presidential election, expected to be held on 29 September. His recent approval rating had dropped below 30% – historically a ‘danger zone’ for an incumbent prime minister. The defeat of a candidate backed by Mr. Suga in the mayoral elections in his hometown of Yokohoma earlier was a definitive forewarning and discontent was brewing at his handling of the pandemic crisis.

The prime minister’s resignation is a positive development for markets as the LDP’s chances at the elections appeared weakened with the incumbent at the helm. Consequently, markets were wary of a potentially unwelcome policy shift. Mr. Suga now needs to step down from his roles both as the party president and as Japan’s premier. Since there might not be enough time to hold the Lower House elections on 5 October, it will need to be postponed to 21 October, with the actual voting expected to happen by 28 November.

Several party members have expressed interest in running for the LDP's presidential election. The high profile among them are as follows:

A candidate needs to have the endorsement of at least 20 party members to run for the presidential election. Mr. Kishida (declared as a candidate) leads a faction with sufficient size, while Ms. Takaichi has yet to secure the required 20 endorsements. Both of these candidates represent continuity. Of the more reform-minded figures, Mr. Kono has yet to endorse his candidature officially, but he could prove to be the proverbial dark horse. Mr. Kono enjoys popularity among LDP supporters and is a member of a faction led by Deputy Prime Minister Taro Aso, the second largest in LDP. Mr. Ishiba is the least likely to succeed despite having his own faction, as he has positioned himself as an internal dissident. For the same reason, he would also represent the most uncertainty over Japan’s future policy path.

The priority of the incoming prime minister will be to formulate a response to the COVID-19 challenge and lay out a path for the eventual reopening of the economy. Japan’s vaccination rate has accelerated since June, gradually narrowing its gap with other developed countries. However, albeit the rate of infections trending down, there is considerable strain on the health infrastructure, which may take a month or two to abate.

Macro Outlook to Worsen in the Short Term

We are likely to see a third fiscal stimulus package, expected to be north of ¥30 trillion (5.7% of GDP), even though the government has struggled to disburse previously allocated supplementary budget funds. Nonetheless, additional funds allocated for the “Go To Travel” campaign, intended to reinvigorate the Japanese economy, and for digitalizing the economy should prove to be a shot in the arm for the economy once health restrictions are lifted.

We have downgraded our macro outlook for the third quarter, after the state of emergency in Tokyo and Okinawa was expanded to more prefectures. This extension of emergency threatens to drag down services consumption, which has been resilient until now, and presents downside risks for the 2021 GDP forecasts (Figure 1). Mobility has also fallen since July, implying a stronger behavioural response from households. Supply-side bottlenecks in the manufacturing sector, particularly autos, are likely to weigh on durables consumption through the yearend. 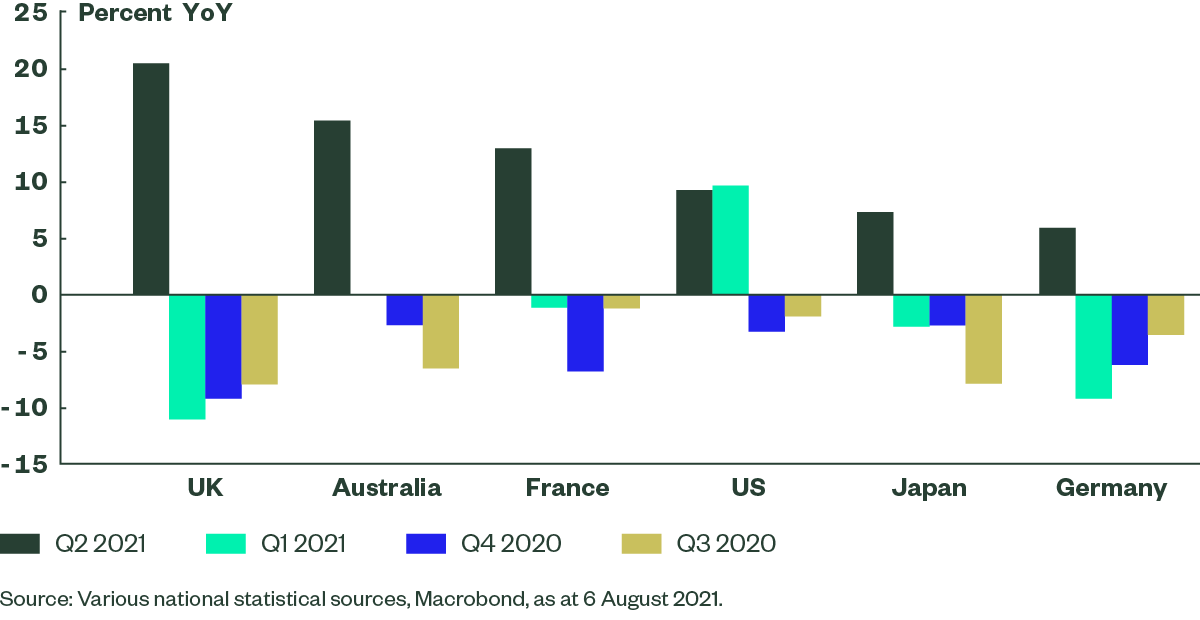 The macro policy direction in the short to medium term will likely be a continuation of the Abe/Suga regime. In all probability, the incoming premier will need the support of the Abe faction, which makes any deviation from the existing expansionary/reformist approach unlikely. Most of the contenders have worked closely with Mr. Abe or Mr. Suga in past administrations – this means there is a likelihood for the continuation of the expansionary macro policies, which should be supplemented by structural reforms. We expect status quo on the monetary policy front. Governor Haruhiko Kuroda will serve until the end of his term in April 2023, with the Bank of Japan expected to maintain its accommodative policy stance.

In regard to foreign policy, the US-centred alliance approach is likely to continue, but each candidate differs in terms of their particular approach to geopolitical affairs. For instance, Mr. Abe strongly believed that domestic pro-growth policies were a necessary pillar to project strength abroad, so Abenomics also had a geopolitical dimension.

Mr. Suga's declining popularity was a major source of uncertainty ahead of the LDP elections and markets reacted positively when he decided to step down. TOPIX, for instance, touched 2,017, a level not seen since 1991. Based on current trends, we believe domestic politics are likely to continue to be supportive of equities. The development is probably more neutral for USD/JPY unless the election delivers a surprise.

The views expressed in this material are the views of Kaushik Baidya and Elliot Hentov through 09 September 2021 and are subject to change based on market and other conditions. This document contains certain statements that may be deemed forward looking statements. Please note that any such statements are not guarantees of any future performance and actual results or developments may differ materially from those projected.