Antigen Testing May Be the Game Changer That Economies Need

Antigen tests are faster, cheaper and more scalable than the familiar molecular test for COVID-19. A new multibillion market could open up if the health care industry manages to establish a threshold for test accuracy. Broader acceptance of antigen tests should also bring significant revenue growth for the handful of public companies that have such products in the market today. 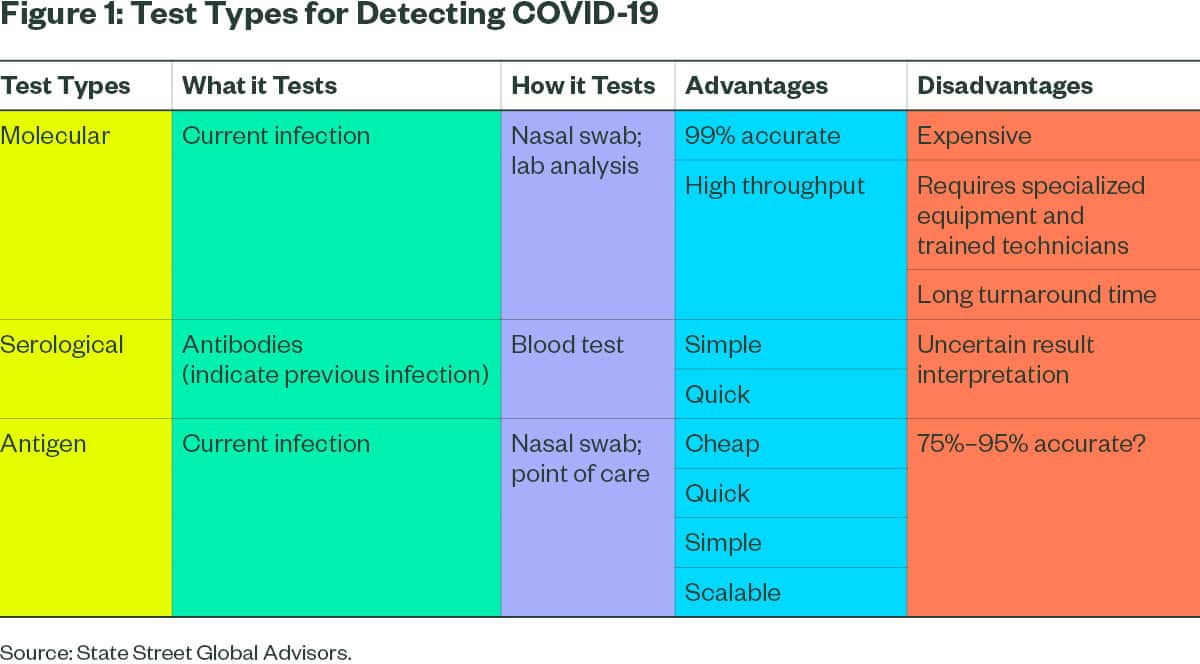 While health professionals know much more about COVID-19 today than at the beginning of 2020, containing the virus has proven to be difficult. Critical hurdles include: 1) asymptomatic people transmitting the virus and 2) the possibility of recovered patients getting reinfected. Add in the approaching winter season and it is clear that a second wave is clearly emerging as a risk to the economy. In this context, an accurate, fast and widely available detection test could keep economies open until a credible vaccine is developed.

There are three primary categories of COVID tests, each with varying costs, turnaround times and scalability. Molecular test is the most prevalent test for a current infection (the long nasal swab) and is the gold standard in terms of accuracy. The test also has a high throughput: large instruments can run hundreds of samples simultaneously though each cycle that takes several hours. The downsides to the test are its cost (US$50-US$100/test) and the need for a highly trained lab technician to administer the test and run sophisticated assays in a laboratory to generate results. This results in longer turnaround times (at least a day or two and up to 7-10 days during flare-ups).

Although serology tests were launched with much fanfare, demand has been limited so far. A serology test detects antibodies from a previous infection, making the individual theoretically immune. The test is simpler to administer than a molecular test because it uses a straightforward blood draw. However, one major drawback of the test is the difficulty in interpreting results. For instance, does the test detect the right antibody and what level of antibodies would confer immunity on an individual? Demand for serology tests should increase once these issues are resolved and vaccines become more widely available.

Like molecular tests, antigen tests look for a current infection. They are modestly less accurate than molecular tests but are cheaper (US$5-US$20/test), faster, simpler (no labs needed) and more scalable (can be manufactured in mass quantities). Antigen tests use a simple swab in a self-contained kit. Using Abbott’s test as an example, normal nasal secretions are swabbed, a few drops of a reactant are added and results are made available in about 15 minutes. Currently, a prescription is required, and the test needs to be administered by a health care professional (similar to a seasonal flu shot). For a summary of the key facts regarding these tests, please refer to Figure 1.

Antigen testing could turn out to be a potential game changer that could help re-open economies worldwide. To the extent that the current testing accuracy is enough to survey broad populations with low COVID-19 prevalence, antigen testing could be used to ensure a safe environment in schools, workplaces, sporting events and cruise ships, among other public spaces. The test could also potentially more than double the number of people that can be tested globally.

Studies on antigen tests have been underway at Yale University, the University of Illinois, the State University of New York and most recently at the University Notre Dame, among others. As a result, more data should become available in the upcoming months. The availability of antigen testing has given decisionmakers at the Big Ten and Pac-12 Conferences the confidence to proceed with the college football season in the United States.

Currently, there are only half a dozen manufacturers of antigen tests and the potential revenue pie is expected to be large. Publicly traded companies include Roche; Abbott Laboratories; Becton, Dickinson and Company; and Quidel Corporation. Further, Germany-based Qiagen hopes to launch a test in the fourth quarter. We estimate that antigen tests could result in about 17% sales growth for Becton, 9% for Abbott and 7% for Roche. For the smaller Quidel, the tests could potentially double its sales.

Key assumptions behind these estimates include companies operating at a 100% capacity for a full year at the current prices. It should be noted that Roche plans to expand its current capacity from 40 million tests per month to 80 million by the year-end; Abbott from 25 million per month to 50 million in the fourth quarter; and Becton from 3 million currently to 8 million in the fourth quarter and further to 12 million per month in the first quarter of 2021.

The revenue boost should likely last until a vaccine or an even better test is made available. Antigen tests may also cannibalize molecular tests and labs. This would impact companies such as Thermo Fisher, Danaher, Quest Diagnostics, LabCorp, Biomerieux, DiaSorin, Hologic, Eurofins and Sonic Healthcare (note that Roche, Abbott, Becton and Qiagen make molecular tests, too). Given the testing needs during the pandemic, we believe these tests may prove to be complementary to each other. Diagnostic protocols may also develop such that a positive antigen test could lead to a confirmatory molecular test.

We are watching the success rate of antigen testing in a non-clinical environment. Ideally, these tests will do what they are designed to do – rapidly identify people with an active COVID-19 infection so that they may be quarantined. This could prove to be of great help for schools, offices, the travel industry and other segments of the economy.

Attainment of a fast, reliable testing would be a meaningful step toward battling COVID-19. Moreover, antigen testing could be a source of revenue growth for a limited number of companies. The availability of an antigen test product in itself may not trigger a buy or a sell rating under our process, but it may have an effect on our target prices. We would be happy to further discuss these nuances with our clients.

From an investment perspective, the Fundamental Growth and Core Equity team has been using screening tools that monitor about 400 health care companies globally for more than a decade in combination with fundamental research on those companies. We will continue to work on identifying the companies whose share prices are at odds with their long-term earnings potential.

The views expressed in this material are the views of the Fundamental Growth and Core Equity team through 09 October 2020 and are subject to change based on market and other conditions. This document contains certain statements that may be deemed forward looking statements. Please note that any such statements are not guarantees of any future performance and actual results or developments may differ materially from those projected.

The above targets are estimates based on certain assumptions and analysis made by SSGA. There is no guarantee that the estimates will be achieved.

The stocks mentioned are not necessarily holdings invested in by SSGA or a third-party fund manager. References to specific company stocks should not be construed as recommendations or investment advice. The statements and opinions are subject to change at any time, based on market and other conditions.