There has always been a large public fascination with streaks, as it shows a consistent level of dominance. It also creates a sense of drama around “when it might end”, so you must watch and be aware of its status. Simply put, streaks get noticed, whether it is consecutive Oscar wins by an actor, multiple wins from a specific team day-over-day, or a string of days with positive returns in the stock market.

Since the start of November 2020, the markets have been on a risk-on hot streak – evidenced by 85% of Russell 3000® Index stocks1 producing positive returns since those dual headwinds of election and vaccine timeline uncertainty were removed. In fact, the market has had positive returns on 56 of the days since then – or 60% of the time.2 With such strong daily returns, the gains over the past five months are a cumulative 14%.3 Yet, not all market segments are streaking the same way.

While the broader US market is up 14%, value-, small-cap-, and high-beta stocks are up 32%, 30%, and 40%, respectively in this five-month period.4 And while all sectors have positive returns since then, the dispersion within the 11 GICS sectors is almost near all-time highs as leaders (Financials 26%, Energy 48%) have broken away from the pack.5

This strong beneath the surface performance by cyclical exposures is reflective of what is driving markets right now: higher interest rates predicated upon upbeat growth and inflation expectations as the economy recovers and reopens, combined with positive vaccine inoculation trends and continued accommodative monetary policies and large fiscal stimulus.

The streak risk assets are on is, to me, reminiscent of the Oakland Athletics 20-consecutive wins in a row back in 2002, as showcased in the movie Moneyball. The streaks are similar for two reasons. 1) Improbable, as the A’s were a small market team not expected to win anything, and before November stocks had declined over the prior two months by 6% with concerns on the path ahead uniquely present.6 2) Gratifying, as the A’s were underdogs with their wins exemplifying a true team spirit, and this rallying run by stocks being juxtaposed against encouraging progress towards the healing of our society and economy.

All streaks end, however. Even the most durable, as there is always something that gets in the way. Like the Minnesota Twins shutting out the A’s on the 21st game. For stocks, it is likely going to be one of two reasons: 1) the Federal Reserve changes their in-game tactics and signals tighter policy or 2) if actual and identifiable fundamental growth doesn’t live up to expectations.

The latter is more likely in the near term, as the Fed has continued to beat the drum of loose policy and is well aware of the consequences of removing it too early – like the Tampa Bay Rays fans understanding the impact of removing your best starter (Blake Snell)7 from the most important game of the season. For stocks, so far earnings revisions have remained positive for broad-based stocks,8 but all that does is create a higher bar. Yet, the sentiment is positive as we head deeper into the season.

Hot start for stock funds
With the Major League Baseball season now finally back (games started on April 1st), it made me think one of the greatest streaks of all-time, and one that will likely never be broken: Joe DiMaggio’s 56-game hitting streak in 1941 and how this unbelievable run (as I read it in history books) took on a life of its own. This streak by the Yankee Clipper is iconic, and so far in 2021 the flows into ETFs have been equally as absurd, with investors putting serious capital to work to partake in this risk-on rally.

US-listed ETFs amassed almost $100 billion of inflows in March, pushing flows in the last five months to over $400 billion. More importantly, the consistently strong flows led to a record breaking $251 billion haul in the first quarter of 2021– surpassing the prior quarterly record flows from Q4 2020 by $62 billion (or by 33%).

Like prior months, the higher than normal flows were led by risk-on equity ETFs and continue to paint a cyclically oriented bullish positioning picture. And the $207 billion of inflows this quarter were a staggering 51% above the prior record quarterly high from Q4 2020 ($138 billion).

From a geographical perspective, the US also notched record flow totals for the quarter (+$126 billion), following their highest month of flows ever in March (+$67 billion). And beneath the surface of the broader US category, the risk-on mood is akin to employing an “all gas, no breaks” type of strategy to participate in this rally, as cyclical sector and style exposures have been powering the record run for US equity ETFs throughout the last month and quarter.

Hitting for the cycle

Financials took in $4 billion, raising their sector leading year-to-date total to $15 billion, or 31% of their start of year assets – the largest organic asset raise on a relative basis out of any sector as well. As to not be outdone by their cyclical teammate, Energy ETFs, following nearly $5 billion of flows in March, raised their 2021 total to almost $10 billion. As a result of these strong flows into just two sectors, and the fact that only four sectors had outflows this year, Q1 sector flows (+$34 billion) also broke quarterly records – outgaining the prior record (Q4 2016) by 40%. 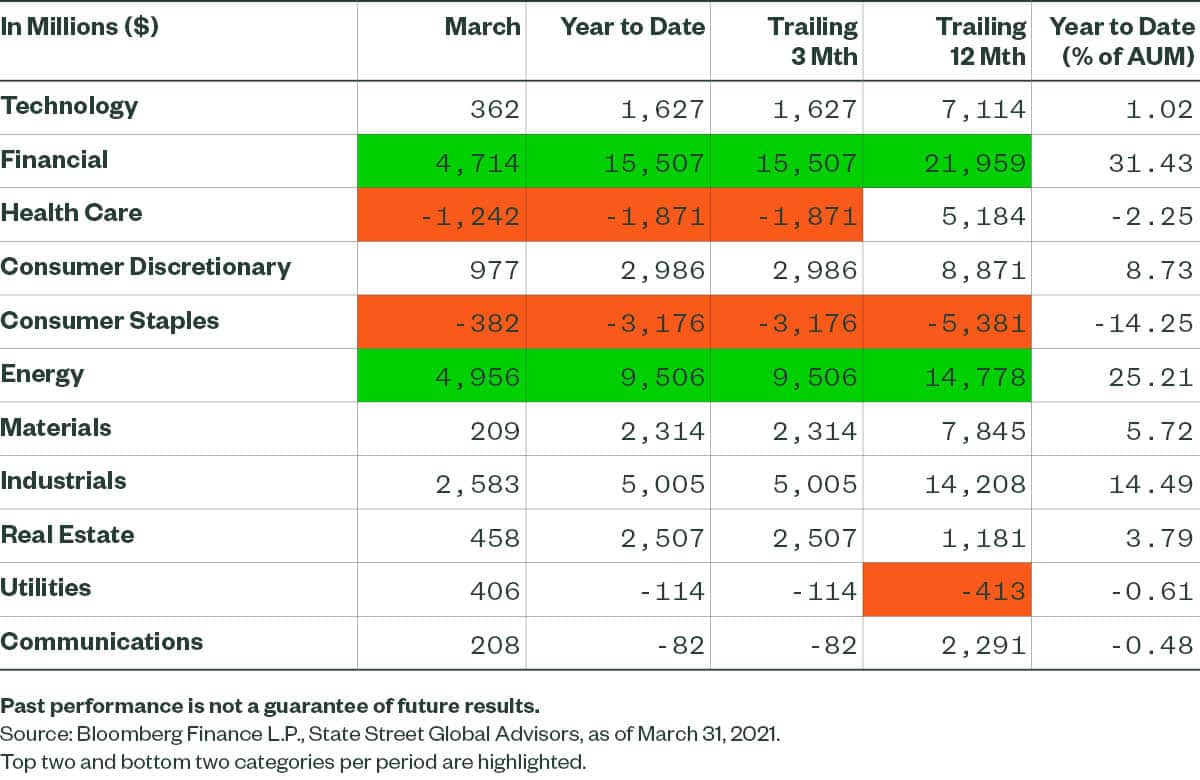 Style flows followed a similar record setting, cyclical, and risk-on pattern. Value ETFs amassed a record $14 billion in March – 57% more than the prior record from November 2020. While not a record, small cap ETFs took in their fourth highest monthly flows ever at $7 billion. Yet, the quarterly flows (+$19 billion) are a record for small-caps, as are the quarterly flows into value ETFs (+$25 billion).

The difference between cyclical and defensive sectors as well as value versus growth styles flows is at its widest level ever, as a result as shown below. This further strengthens the notion of an emphatic risk-on, cyclical positioning from investors amid this rally.

Bond flows do not fully echo this similar risk-on position. Aggregate and Government funds led in terms of inflows for bond sectors. Yet, there was over $1 billion of inflows into subjective credit and non-traditional bonds sectors in March – a likely byproduct of the low rate environment and the need for income.

Bond positioning neither indicates caution or unbridled risk taking, as a result. Considering the significant risk-on mentality expressed in equities and the duration induced price losses on bonds from rising rates coupled with declining levels of macro volatility, this is not a surprise. The only constant in positioning has been the consistent inflows into the below investment grade and floating rate bank loan sector, a category that registered a quarterly inflow record in Q1 2020 (+$3.3 billion).

Flows starts the year with a strong launch angle

This higher reflationary rate regime has spurred a risk-on rally, leading to a torrential pace of inflows into strategies that may stand to benefit from this new macro environment.

Looking ahead, in addition to the $1.9 trillion fiscal stimulus and the Fed’s continued accommodative monetary policies, the pent-up spending from elevated US personal savings – currently 20% of disposable income and $1.7 trillion more than the pre-pandemic rate12 – could the markets risk-on rally caps firmly in place as those dollars begin to filter into the real economy and vaccine rates keep improving. And investors will want to keep an eye on the box score during the first quarter earnings season to discern if firms can deliver on the growth expectations and keep this streak going for another month.

Considering value stocks are expected to grow earnings at a higher rate than the broader market, and offer a lower multiple to access this growth,9 they may be one position to add to a portfolio’s lineup as the markets try to navigate this rising rate reflationary regime shift and keep the streak going – like putting in Scott Hatteberg10 because he just gets on base.

Russell 3000® Index: The Russell 3000 Index is composed of 3000 large U.S. companies, as determined by market capitalization. This portfolio of Securities represents approximately 98% of the investable U.S. equity market.
Russell 2000® Index: The Russell 2000 Index is comprised of the smallest 2000 companies in the Russell 3000 Index, representing approximately 8% of the Russell 3000 total market capitalization.
S&P 500® Index: A market-capitalization-weighted stock market index that measures the stock performance of the 500 largest publicly traded companies in the United States.
S&P 500® Pure Growth and Pure Value Index: a style-concentrated index designed to track the performance of stocks that exhibit the strongest value or growth characteristics by using a style-attractiveness-weighting scheme.
S&P 500® High Beta Index: The S&P 500® High Beta Index measures the performance of 100 constituents in the S&P 500 that are most sensitive to changes in market returns.
S&P 500® Value Index: The S&P 500 Value Index is a market capitalization weighted index. All the stocks in the underlying parent index are allocated into value.
Growth: Characterized by higher price levels relative to fundamentals, such as earnings.
Value: Characterized by lower price levels relative to fundamentals, such as earnings.
Quality: Characterized by stable earnings, high return-on-equity and low debt.
Low Volatility: Characterized by low levels of standard deviations or low beta.
Smart Beta: A term for rules-based investment strategies that don’t use conventional market-cap weightings.

This material or any portion thereof may not be reprinted or redistributed without the written consent of State Street Global Advisors.