Q&A: Impact of the Russia-Ukraine War on Emerging Market Debt

Chris Concannon, President of MarketAxess, and Amy Hong, Head of Strategy for Global Markets at Goldman Sachs, joined Gunjan Chauhan, Global Head of SPDR ETF Capital Markets at State Street Global Advisors, in December 2021 to discuss the future of fixed income. Read our summary of their exchanges on three key takeaways below. 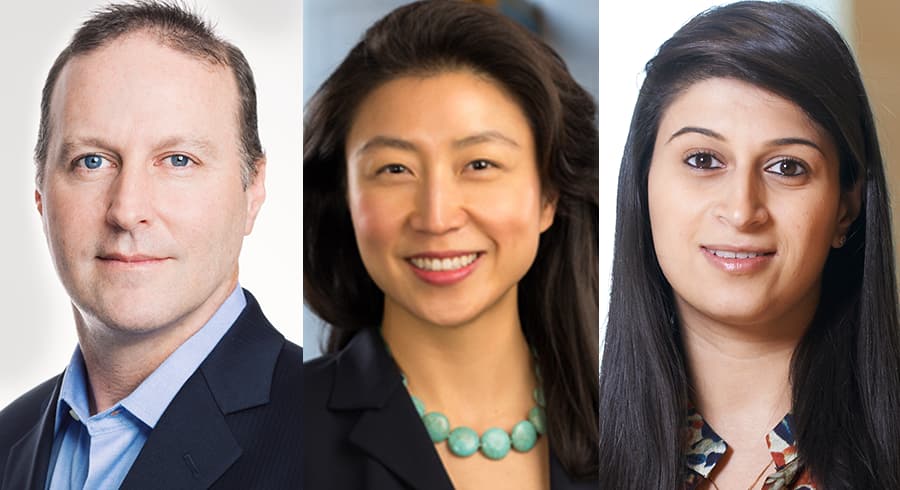 How have EMD markets (local and hard) been impacted by the Russia invasion Ukraine?

There have been three layers of impact on EMD markets. We’ve seen a direct impact on Russia, Belarus, and Ukraine. Secondary impact has occurred on countries in the ex-Soviet sphere, like Tajikistan, Kazakhstan and others. And the third level of impact happened across global markets more in terms of the risk-off sentiment that the war brought on as well as its impact on commodity prices.

Starting with the first layer, on the local side, there was a significant sell-off as both bonds and the ruble were impacted. The onshore market was closed for several weeks and, to the extent there was some offshore trading, bonds were trading extremely distressed due to the repatriation restrictions. Local bonds trade in Ruble, and in retaliation to Western sanctions, Russian authorities took steps to ensure that Western investors “hostile states from a Russian perspective” would not be paid coupons, a form of selective default. They also banned domestic banks from trading with Western counterparties. As a result, local bonds were trading at distressed levels as sanctions ramped up and that remains the case today for investors outside of Russia.

The hard currency market behaved a little bit differently. Initially there was a strong sell-off but there was some debate whether Russia was going to default on those bonds or whether Russia had the ability to pay in USD. Long story short – especially for sovereigns and certain corporates like energy producer Gazprom – those bonds traded distressed but at better valuations than the local given the international law governance of these bonds. Some of these bonds were issued under New York law or under European laws which gave investors more protection than local bonds.

The other important development was on the index provider front, where major index providers decided to remove Russian and Belarussian fixed income securities from both their local and hard-currency indices at a price of zero at month-end March. Ukraine remains in major hard currency fixed income indices after being downgraded to CCC. Despite receiving strong financial support from Western countries, Ukranian hard currency bonds trade at distressed levels due to the increased risk of default.

The secondary layer, which refers to the countries in ex-Soviet sphere, were initially adversely impacted, but as some distanced themselves from Russian actions, some of these securities partially recovered. For example, Kazakh government international bonds denominated in USD lost 20-30% of their value immediately after the invasion in early March before recovering 10-15% by the end of March.

And finally on the global front, after the initial risk-off impact of the invasion on global markets, we saw some recovery, and starting around the middle of March, the market’s focus has shifted on the Fed and other developed market central banks and their policies of monetary tightening to fight inflation. Generally speaking, some of the broad EM risk recovered after the sharp sell-off following the invasion. If you look at the JP Morgan EMBI Global Diversified index as a reference for broad EM risk, the index spread was 382 bps on Feb 15 prior to the invasion. The index spread widened 144bps to 526bps on March 8 following the invasion before recovering by 126bps to 400bps on March 31.

What's the current state of sanctions against Russia and the capital controls?

The sanctions instituted by most of the Western countries on Russia has had a severe impact on EMD indices. Taking a step back, Russia had been an investment grade (BBB rating) part of EMD indices prior to the invasion because of a pretty strong balance sheet, and a very high level of reserves. In terms of representation, Russia was a meaningful part of both the hard currency and local currency indices prior to the invasion - around 3% of the hard currency JP Morgan EMBI Global Diversified Index - and around 7% of the local currency JP Morgan GBI-EM Global Diversified Index as of Jan 31, 2022.

The level of sanctions continues to increase. The US and UK announced new sanctions on Russia in early April against Sberbank, Russia’s largest financial institution, and Alfa Bank, Russia’s largest private bank, by freezing assets touching the US financial system and prohibiting business with them. Moreover, there will be a full ban on any new investments into Russia, including the energy sector.

The EU is still finalizing its package and we've obviously seen a lot of companies pull out of Russia on their own so it's becoming increasingly difficult to do business there. But it seems like there may be more sanctioned entities, as this kind of top-down enforcement from global governments, and the Russian companies that are under that scope, is increasing.

What was the extent of SSGA exposure to Russian debt and how has SSGA been managing EMD bonds in the face of these new challenges?

Prior to the invasion, SSGA set up a coordinated effort to understand our exposures and plan for various scenarios across the firm. From a fixed income perspective this included the exposures that we had across the EM portfolios we run in Boston as well as in London, but also exposures through the corporate and sovereign channels in broader portfolios. Russia had some investment-grade companies like Gazprom that were present in the global aggregate bond index, for instance and some of the high yield portfolios had exposure to some of the Russian corporates like Russian Railways.

A team of investors that included traders and portfolio managers participated in daily calls to coordinate our actions. We also worked to stay on top of market developments in terms of daily pricing as well as what was happening on the political front. In addition, we have been in constant contact with the major index providers to understand their treatment of Russian and Belarussian bonds. Almost all index providers decided to exit Russia and Belarus at a market price of zero in the middle of March effective at month-end.

What's your outlook on EMD over the next 6 to 12 months?

The broad story is that we are cautious on EMD. Tightening policy by the Fed is generally not a conducive environment and strong global inflation tends to impact emerging markets more than the developed markets.

On the other hand, the broad EM outlook has markedly improved since last year with valuations on the fair to cheap side for EM spreads and local yields. On the local currency side, EM yields have risen substantially with the broad JP Morgan GBI-EM Global Diversified Index yielding 6.23% as of March 31. The yield on this local-currency index was 200bps lower, 4.22%, as recently as Jan 1, 2021. Similarly, on the hard currency side, the broad JP Morgan EMBI Global Diversified index yielded 6.44% on March 31 which should provide some cushion to investors against potential future volatility in spreads and rates.

On the macro front, markets have already priced in a meaningful amount of tightening by the Fed and on the inflation front, the peak inflation is likely behind us with the year-over-year CPI numbers projected to move lower through the rest of 2022 despite remaining elevated compared to the Fed’s 2% target. This may provide some short-term relief for the Fed to tighten policy more gradually which should be supportive of EMD as an asset class over the tactical time horizon.

State Street Global Advisors is leader in EMD investing and a pioneer in indexed EMD. We launched our first indexed strategy in 2005. Today we manage over $24 billion in dedicated EMD portfolios and are among the largest EMD investors in the world. We have a solutions-oriented approach and work in partnership with institutional investors to meet their investment objectives.

While the shares of ETFs are tradable on secondary markets, they may not readily trade in all market conditions and may trade at significant discounts in periods of market stress.