In the three-legged relay of European elections (in Germany, France and then Italy), the German election was supposed to be the one with the least market impact. German politics are characterized by constancy, consistency and consensus as personified by the outgoing Chancellor Angela Merkel. Her departure is one reason why this year’s election is much more uncertain than any previous ones. Since the German government is central to Europe’s medium-term policy mix, a wider set of assets than usual is vulnerable to the election outcome with uncertainty possibly persisting beyond the election day.

In this context, we will explore the election dynamic more deeply, including possible outcomes and potential market implications. For investors, the critical point is that, in this unusually uncertain election, very small shifts in voting behavior could fundamentally change the election outcome. This not only prevents election outcomes from being properly priced in at this stage but also creates considerable potential for a market surprise on election night.

Why So Much Uncertainty?

Investors hate uncertainty and frankly, they have rarely had to worry about German politics. When political shifts occur in Germany, they are usually well telegraphed and then national elections confirm the prevailing trend. This year is no different, but the specific arithmetic of polling distribution means there is a very small margin of error for any scenario to materialize. In other words, very small shifts in voting behavior (as little as 2%-3%) could fundamentally alter the outcome of the election, even if voters are just switching parties within a political camp.

Figure 1 shows the polling tracker since the 2017 federal election in Germany, which contains multiple insights. First, most of the major polling volatility in 2021 has been limited to the ‘Bourgeois Bloc’ of conservative, social democrat and green parties (the center-right Free Democrats do not count as they have also positioned themselves as a protest party despite espousing largely mainstream policy positions). Together, these parties have polled around two-thirds of the vote fairly consistently over the past four years. However, due to the arithmetic of coalition building, the relative strengths of each of these three parties yields different potential government coalitions.

Figure 1: Polling Tracker for Germany Since 2017 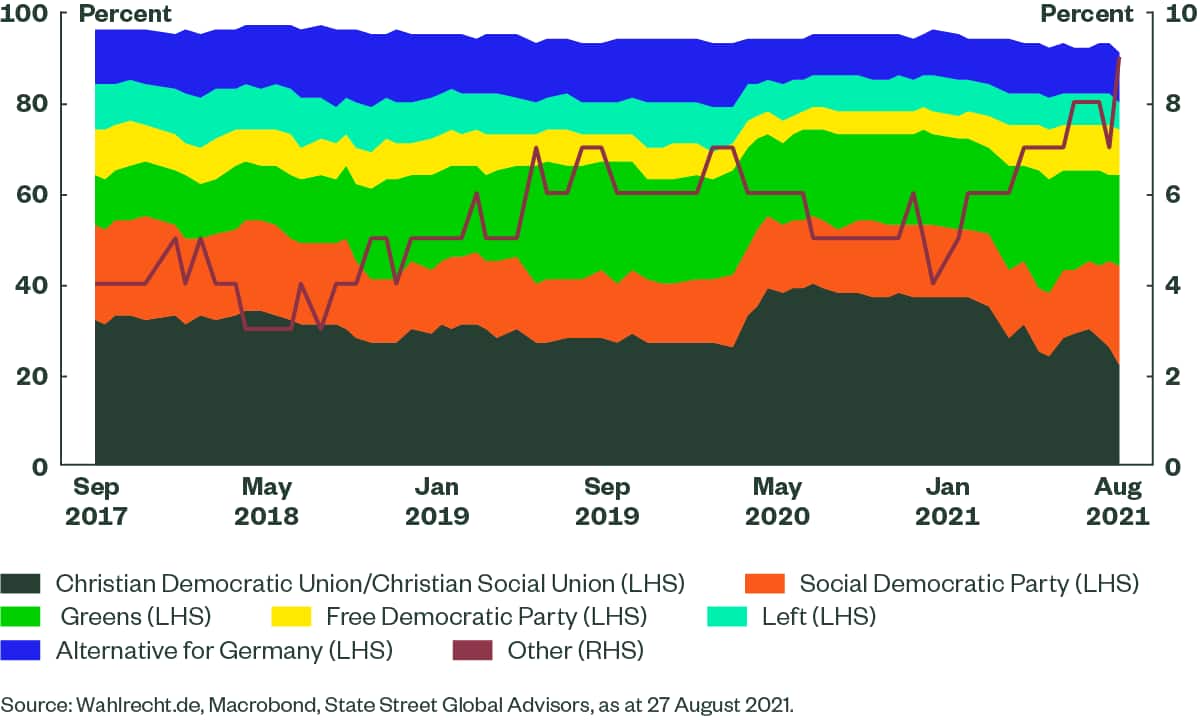 Although Germany’s electoral system requires parties to garner a minimum of 5% of the popular vote in order to be represented in parliament, the collection of votes for ‘other’ small parties is important because of their impact on the coalition arithmetic. Due to the 5% electoral threshold, those votes are essentially wasted, and the share of votes of the remaining parties is enlarged. In practice, an average of 5%-6% of votes go to smaller parties and consequently, any winning coalition only needs to garner 47%-48% of the popular vote.1 This was the case in 2002, when Chancellor Gerhard Schroeder and the Greens governed with 47.1%, and in 2009, when Ms. Merkel and the Free Democrats formed a government based on 48.4% of the votes.

Why Does This Election Trivia Matter?

The simple point is that the margin of error is very small and no election outcome can be properly priced in at this stage. Moreover, there is considerable scope for a market surprise on election night. The immediate market reaction will be determined by three main factors: the speed of government formation, the stability of any prospective government coalition and the expected policy mix on key areas such as fiscal and eurozone policy.

Figure 2 summarizes our views on the key metrics on election night. First, we believe most government formations will be slow and there will be some uncertainty premium. After the inconclusive 2017 elections, the EUR/USD lost about 2% from election day until talks for a ‘Jamaica’ coalition were abandoned and a restart of a grand coalition was announced (the trade-weighted euro also paused its year-long appreciation during this time). Second, the stability of any such government is similarly important as it would narrow or widen any uncertainty premium.

Failure to build a coalition, thereby requiring a re-run of the election, is a distinct possibility. Germany has never been governed by a three-party coalition, so such a configuration would be somewhat experimental and inherently less stable than the previous two-party arrangements. In this regard, the participation of the Free Democratic Party is slightly more fraught with uncertainty given its policy positions and electoral strategy of capitalizing on disappointment with the other centrist parties.

Ultimately, the policy agenda is what will matter most, and what will impact asset prices across Europe. The exact composition of the final coalitions – that is, the relative electoral percentages of each party in the coalition – is critical, as this will determine the relative political weights in government. In the absence of that information, at this stage, we can only discuss the potential direction of fiscal and eurozone policy at a high level.

The most bullish scenario for investors would be a stable German government with an unprecedented appetite for fiscal expansion and eurozone reform. This would likely either be a Black-Green coalition or the ‘Kenya’ combination with a strengthened Social Democratic Party. Either outcome could see the euro strengthen, equity sentiment rise and peripheral spreads narrow in the days after the election. Conversely, the most bearish outcome would be an inconclusive election with most credible coalitions failing to secure a solid majority either at the ballot box or in coalition talks. At this point, ultimate election outcomes hinge on very small differences in voting behavior. Investors should brace for the possibility of a substantial surprise when votes are tallied.

1. In fact, the threshold could even be slightly lower due to changes in the recent electoral law. This could disproportionately benefit the center-right Christian Democratic Union of Germany/Christian Social Union in Bavaria (CDU/CSU) alliance, adding a few seats to their representation. Germany runs on a dual-election system with votes by district as well as proportional representation on national lists. Many voters of smaller right-wing parties still vote CDU/CSU for district. This phenomenon is less concentrated on the left wing, where the Social Democratic Party, Greens and Left voters split their vote less frequently.

The views expressed in this material are the views of Elliot Hentov through 02 September 2021 and are subject to change based on market and other conditions. This document contains certain statements that may be deemed forward looking statements. Please note that any such statements are not guarantees of any future performance and actual results or developments may differ materially from those projected.