Europe Comes in From the Cold

The global financial crisis kindled a prolonged period of economic underperformance of the eurozone, especially against the United States (US) (Figure 1). This underperformance gap widened dramatically during the 2012-13 euro crisis, never really closed and widened further during COVID-19 to reach a record during the first quarter of 2021. Given this dismal historical backdrop, our positive view on eurozone growth may seem surprising.

Figure 1: A Long Spell of Underperformance for Eurozone 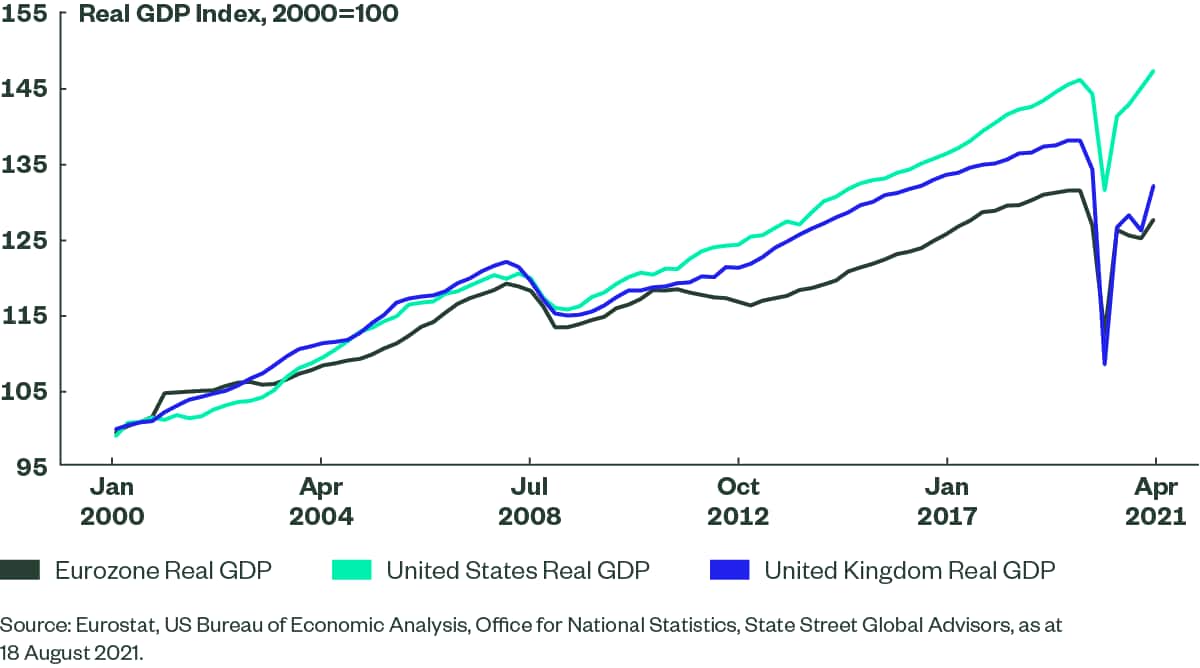 There are two parts to our pro-eurozone argument: a short-term/cyclical component and a longer-term/structural one. From a short-term standpoint, we have been maintaining an above-consensus 2021 growth forecast for the eurozone since last year even as consensus views dimmed markedly during the spring amid the region’s slow initial vaccine uptake. We had assumed a rapid acceleration in vaccinations once supply improves – an assumption that has since been validated.

We also assumed that elevated excess household savings and strong global demand would drive growth reacceleration from Q2 onward. Newly released data further validated these expectations with eurozone growing faster than the US in the second quarter. Unsurprisingly, consensus forecasts are turning rosy once again and we suspect they have further to go.

However, by far the most important part of our argument is structural and centers around our belief that COVID-19 has ushered in a more counter-cyclical macro policy mix that will improve the region’s longer-term growth prospects. Precisely because the eurozone had been subject to the excessively restrictive constraints of the Stability and Growth Pact, it stands to benefit most from improved monetary-fiscal policy coordination.

That the austerity response to the euro crisis has given way to the New Generation EU (NGEU) recovery instrument during the COVID-19 crisis assumes significance in this context. The potential long-term implications of this shift should not be underestimated. The contrast is profound – taboos around fiscal rules and debt mutualization are being challenged. Allowing for a more counter-cyclical fiscal policy setting could meaningfully strengthen the region’s “weakest links”, reducing the most extreme downside risks around the single currency’s sustainability.

Evidently, money helps only to a point. The long-term economic success of the eurozone requires the right mix of policies at both the national and the supranational level. Each of these levels is necessary and neither is independently sufficient. It is great to see the supranational policy framework take a positive turn, but this needs to be followed up by (often painful) national-level reforms. After all, that Italy ranks so poorly on so many “doing business” indicators has nothing to do with the regional fiscal policy (Figure 2). 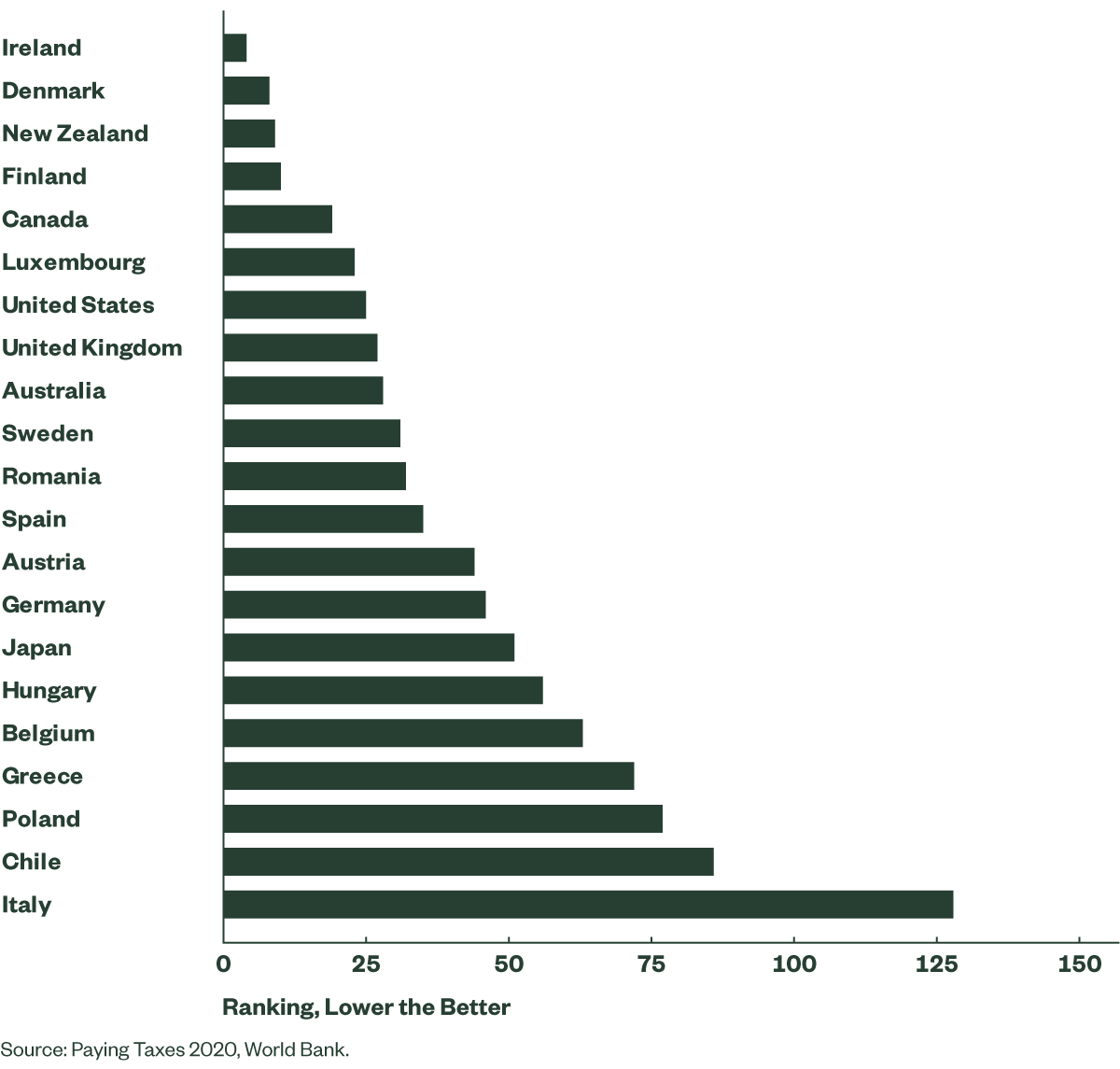 We are the first to admit that the task remains daunting, but we would also argue that the trio of Mario Draghi, Christine Lagarde and Ursula von der Leyen is as formidable a force for positive change as any we have seen in a long while. Moreover, we also detect a favorable shift in the continent’s broader political winds. A big worry thus far has been that political stagnation could undo progress as the pandemic wanes, re-igniting the gloomy 2010-2013 dynamic.

However, political indicators look much more favorable this time around. Germany’s September federal elections are certain to deliver a new chancellor and may produce a new coalition government with high odds of a strong Green participation. This should make Germany more euro friendly and more accepting of a looser fiscal stance in the coming years, both at the national and at the European level. In addition, the Greens are determined to allow public investment to rise outside of the country’s debt brake framework, believing that investments in climate and digitalization will be supportive of sovereign finances in the long run.

This should align well with the NGEU’s dual focus on climate and digital transformation. The development also has the potential to not only lift regional growth over the next few years via increased spending but also to reduce the disparity across countries and make that growth more sustainable. The digital divide among eurozone economies exacerbates the productivity divide – easing the former should help alleviate that divide (Figure 3).

There is no doubt that other forces – such as poor demographics – will exert downward pressure on eurozone’s potential growth going forward. But if investments in digitalization and green transformation help to lift productivity and if a more cohesive macro policy backdrop sustainably reduces downside risks, investor appetite for European assets should improve once again.

From an investment standpoint, the improved cyclical growth picture could be a catalyst for inflows and outperformance. Similarly, the better structural backdrop could make the tactical rerating of European assets more durable, narrowing the long-standing valuation gap vis-à-vis the US.

The earnings picture is certainly improving. Since November 2020 European earnings upgrades have accelerated conspicuously, recently reaching highs not seen for at least the last 20 years and peaking above the same measure for the US (Figure 4). Improving growth as the economy rescales to pre-pandemic output levels along with potential windfalls from NGEU could help propel that acceleration further.

No two historical periods are ever the same, but it is worth remembering that during 2003-2007, when such a positive earnings momentum prevailed in Europe, investors were abundantly rewarded for their confidence in European earnings (Figure 5).

Sector composition also matters. Europe’s sector composition (overweight in Financials, Industrials and Materials and underweight in Information Technology and Communication Services compared with the US) offers an attractive higher beta exposure as economic momentum passes from the US to Europe. As the world slowly but surely puts the disruptions of the pandemic behind it, Europe’s overweight in cyclical sectors should prove to be beneficial.

Moreover, investors have an added comfort from a large valuation tailwind that has emerged in recent years. European stocks trade at a substantial discount to US stocks and are currently valued at 0.75 relative to the forward price-earnings multiple (P/E) of their US counterparts.1  The relative P/E averaged 0.85 over the past ten years and a mere re-rating to that average implies a 13% outperformance. Under the right conditions, much more upside could be unleashed given Europe’s sectoral composition.

The views expressed in this material are the views of Simona Mocuta, Desmond Lawrence and Elliot Hentov through 30 August 2021 and are subject to change based on market and other conditions. This document contains certain statements that may be deemed forward looking statements. Please note that any such statements are not guarantees of any future performance and actual results or developments may differ materially from those projected.