Halfway through 2019, economists and investors are once again facing the macroeconomic threat posed by the US-China trade war. This time, however, they are doing so without simultaneous monetary policy tightening at the Federal Reserve. So while economic momentum clearly slowed in late 2018, as evident in weaker global trade flows, and global growth projections for 2019 had to be scaled back, there have been multiple signs of stabilization in the first half that should, under the right conditions, prevent a dramatic deceleration in world growth. Indeed, given that first-quarter GDP growth surprised to the upside in China, the US and the European Union (EU), we expect that, subject to a de-escalation in the US-China dispute, our baseline outlook for global growth will remain intact (see Figure 1). 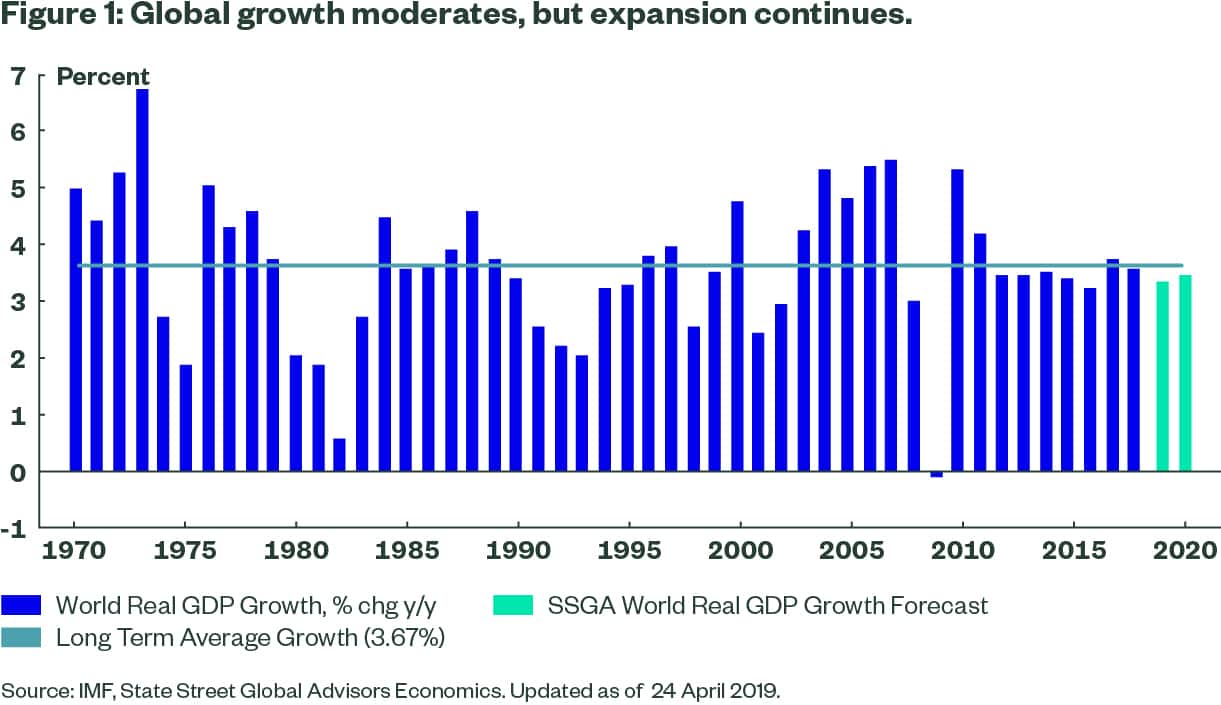 Fed Takes Itself Out of the Picture

Nine months ago, the global economy faced two key risks. First, there was genuine concern that the Federal Reserve (Fed) might tighten too aggressively. At the time, the Fed was engaged in steady policy normalization with quarterly rate hikes and balance-sheet reduction, and providing guidance towards three further rate hikes for 2019. Second, the imposition of 10% tariffs on $200 billion of Chinese goods had ignited concerns that the trade dispute would escalate “on schedule” and the US would follow through with its threat to increase tariffs to 25% on January 1, 2019.

Given such clouds on the horizon, the subsequent market meltdown in late 2018 was understandable. But there was a silver lining: the episode served to sensitize policymakers to the fragility of the global economy. The Fed, for its part, made a dramatic U-turn, initially trimming one rate hike from the expected path in 2019. By March 2019, it had done away with the remaining two, essentially taking itself out of the picture with respect to possible hikes. In doing so, the Fed shifted from being a threat to the extension of the cycle to becoming an enabler of it. In our view, having already hiked nine times in this cycle, the Fed can afford to be “patient” and even has scope to be “nimble.” Indeed, as trade tensions recently re-escalated, Fed Chair Jerome Powell emphasized that the Federal Open Market Committee stands ready to “act as appropriate” to sustain the expansion. Despite having made little progress on the road towards policy normalization, other central banks have followed suit on this dovish tilt.

Having initially improved after the December G20 meeting in Argentina, actions and rhetoric around trade have worsened considerably since early May.  This remains a major risk for the global economy – the most important one, in fact. Indeed, a ratcheting up of current tensions into a full-blown trade war could swiftly derail the global economy’s progress towards stabilization made so far this year. But if the June G20 meeting in Japan brings another respite, allowing talks to continue and further tariff escalation to be avoided (give or take periodic outbursts of protectionism), there are reasons to believe that the current economic cycle – already the longest on record in the US – could continue.

Cycle Could Extend, But Growth will be Modest

Despite its longevity, US expansion during this cycle has been quite weak (see Figure 2). Such labored recoveries are typical following deep financial crises such as that in 2008, and the subdued performance was further dampened this time around by forces such as aging populations. Moreover, there is little evidence of the types of excesses that have historically caused unsustainable imbalances in the economy, sometimes triggering a sudden end to the cycle. For instance, the US personal savings rate is relatively strong and the household debt service ratio is quite low. In most developed economies, including Europe, private consumption should be underpinned by firm labor market conditions and rising labor incomes. This is an important stabilizing factor that can help the global economy weather the current soft patch. While select pockets of overleverage or valuation concerns exist, particularly on the corporate side, they do not appear as yet to be systemically destabilizing. More dovish central banks can be quite helpful here. 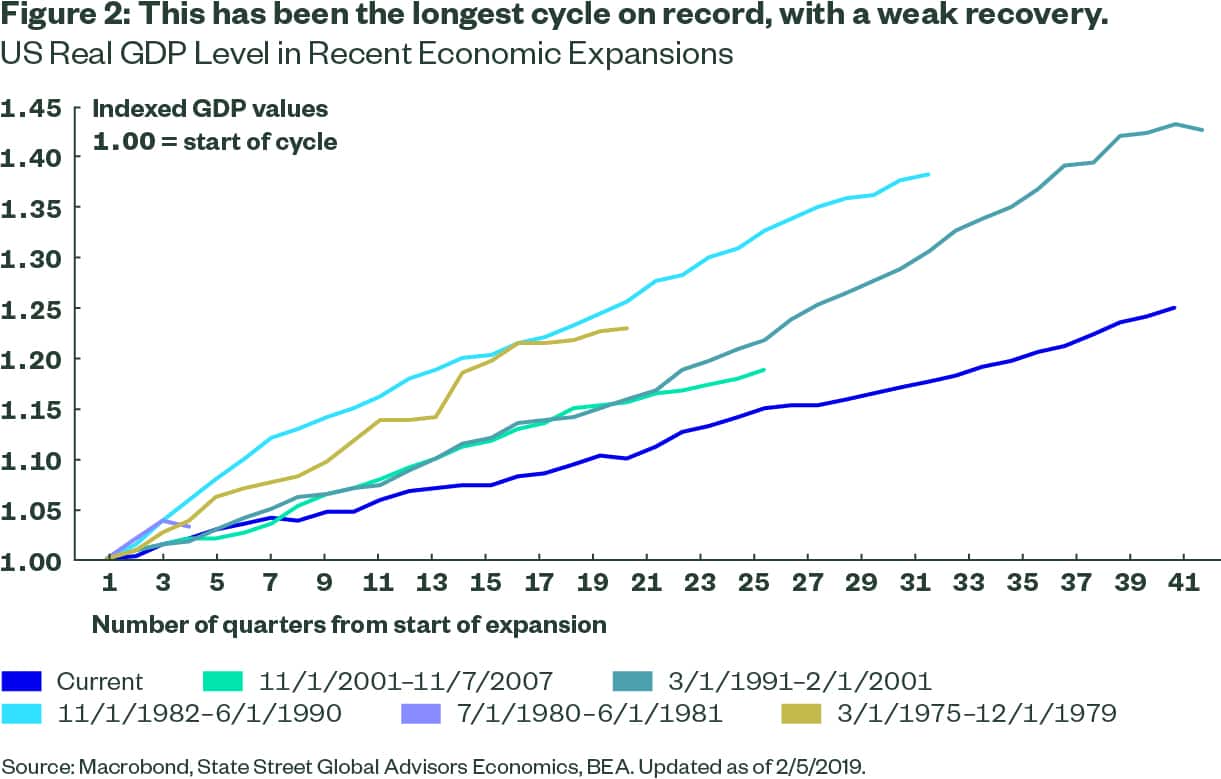 Furthermore, there is little evidence of a pending inflation flare-up. Despite extremely low unemployment and economies having largely closed the output gap, inflation remains low, not only in the US but across the G7 (see Figure 3). This is not to say that inflation is dead, rather that it is manageable. US wage inflation is trending higher, but there are signs that productivity may also finally be picking up, and this should keep unit labor costs (and broad inflationary pressures) contained. This benign inflation picture allows the Fed to focus on extending the cycle. 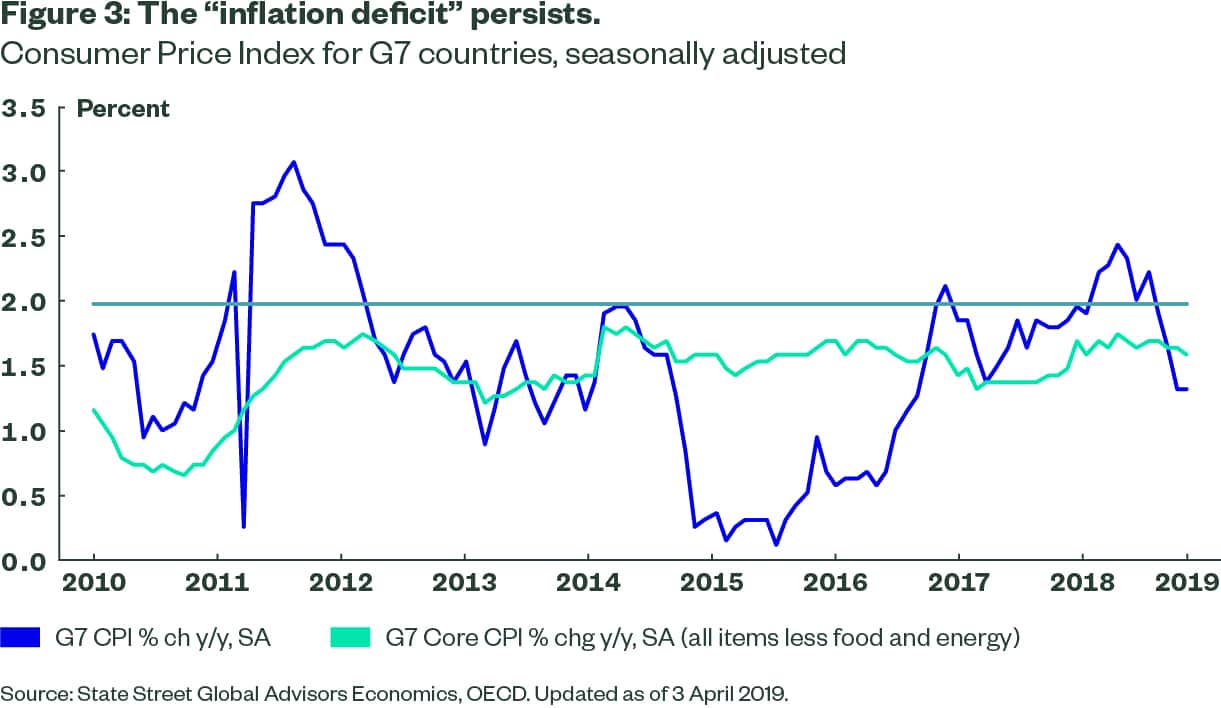 Finally, we believe that, if trade uncertainties dissipate, there is a good chance that the US capex cycle, which looked quite promising through mid-2018 but has since lost momentum, can still revive—though this would now be a 2020, rather than a 2019, story. This could go a long way towards propelling this cycle further. But for this to happen, we need policy uncertainty to diminish. Therefore, we await confirmation—both in data and in policy announcements—of our baseline scenario of continued expansion. We do not believe such an expansion will be aggressive, given how late we are in this economic cycle. Instead, we see a reasonable case for sustained but modest growth. Valuations are not cheap, earnings expectations have been revised downwards from last year, corporate leverage is elevated and volatility should be expected.

Sustainable Momentum in Europe and EM Yet to Appear

Beyond the US, the outlook for growth is mixed. European macro data has improved slightly, but political risk remains elevated. The bloc must contend with poor potential growth in countries such as Italy, cyclically soft performance in Germany, structural and institutional constraints that exacerbate the challenges of the single currency and a lack of clarity on the future of the UK-EU relationship. Nonetheless, just as in the US, eurozone growth this year could come in slightly above European Central Bank (ECB) forecasts, in our view.

Emerging markets (EM) have also shown some signs of improvement. For example, while the medium-term trajectory for China’s GDP growth is clearly lower, first-quarter performance came in better than expected and the country should benefit from government-led stimulus later in the year. But unless and until we get some resolution to the trade dispute that helps reinvigorate global demand, trade flows and investment, it is hard to speak of anything more than stabilization. Genuine and sustainable momentum remains elusive and risks remain skewed to the downside.

Given this economic cycle follows a financial crisis, rather than a typical recession, it should not be judged by typical standards. Despite its longevity, therefore, we believe it can carry on for some time. Economic fundamentals seem resilient, yet not so robust as to provoke the sort of central bank tightening that often ends an expansion. Therefore, we see the risks to the growth outlook as less intrinsic to the economy per se and more directly linked to policy errors—less so on the monetary policy side than the political side. However, these cannot be easily overlooked: trade tensions persist, the lack of clarity around Brexit could be prolonged and election cycles are apt to dominate headlines this year and next.

While none of these issues are likely to derail growth, there may be enough fragility or resulting market volatility to skew the short- to medium-term outlook. Nonetheless, given that the Fed and other central banks are likely to be cautious about raising rates even while the growth outlook improves, it may be that this cycle extends beyond 2020 before we see a significant reversal.

The information provided does not constitute investment advice and it should not be relied on as such. It should not be considered a solicitation to buy or an offer to sell a security. It does not take into account any investor's particular investment objectives, strategies, tax status or investment horizon. You should consult your tax and financial advisor. All material has been obtained from sources believed to be reliable. There is no representation or warranty as to the accuracy of the information and State Street shall have no liability for decisions based on such information. The whole or any part of this work may not be reproduced, copied or transmitted or any of its contents disclosed to third parties without State Street Global Advisors' express written consent. This document may contain certain statements deemed to be forward-looking statements. Please note that any such statements are not guarantees of any future performance and that actual results or developments may differ materially from those projected in the forward- looking statements. Generally, among asset classes, stocks are more volatile than bonds or short-term instruments. Government bonds and corporate bonds generally have more moderate short-term price fluctuations than stocks, but provide lower potential long-term returns.  U.S. Treasury Bills maintain a stable value if held to maturity, but returns are generally only slightly above the inflation rate. Currency Risk is a form of risk that arises from the change in price of one currency against another. Whenever investors or companies have assets or business operations across national borders, they face currency risk if their positions are not hedged. Investing involves risk including the risk of loss of principal.