Eurozone: The Judges Have Spoken, But the Jury is Still Out

On 5 May, Germany’s Federal Constitutional Court decreed that the European Central Bank (ECB) had exceeded its mandate in the implementation of its quantitative easing (QE) program of purchasing government bonds. The main argument suggested that the ECB measures were “not proportional” to the monetary policy objectives and therefore veered into economic and fiscal policy areas. In addition to the dangerous precedent of contradicting the European Court of Justice, this has raised market concerns about the ability of the ECB to sufficiently conduct future QE to maintain financial stability and help engineer an economic recovery.

While peripheral spreads rose and the euro weakened after the court ruling, existential worries are misplaced. The economic crisis resulting from the pandemic is massive and though the eurozone’s architecture has not been reformed enough to fix the monetary union’s deficiencies, the tail risk of an Italian exit is lower than consensus estimates.

Specifically, there are three major developments in 2020 that support the prospect of a sustainable European solution for Italy and other peripheral public debt challenges. First, the crisis has worsened the fiscal profile of all European sovereigns. Even relatively optimistic forecasts by the European Commission predict Germany and the Netherlands will experience a 12%-15% rise in their debt-to-GDP ratios this year. But more importantly, France is forecast to end the year with a ratio of 116%. The political ramification is that public debt management moves from a peripheral issue to a core eurozone problem. Thus, any policy approach will need to help France cope, and by extension, such measures are likely to support Italy and others as well. 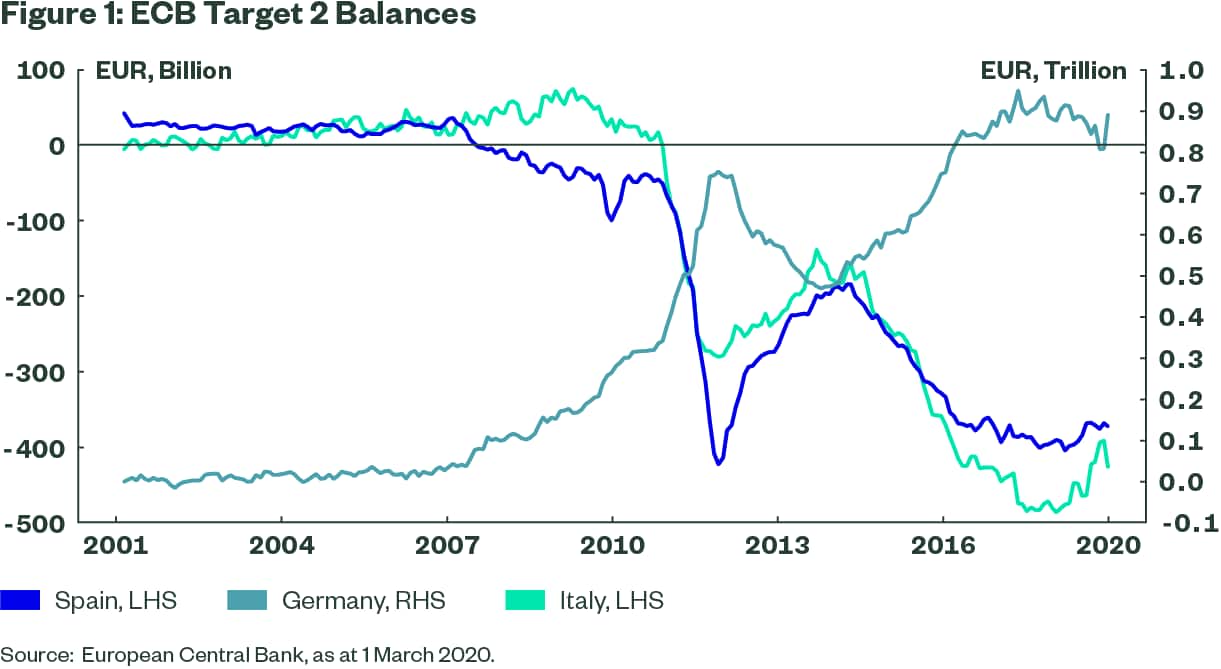 Second, all the enacted measures over the past decade have created an increasing stock of liabilities that would make the cost of any eurozone breakup much higher for all parties. This changes the incentive structure around seeking compromises to ensure sustainability and financial stability. In other words, exposure to Italian debt prevents a Greek-style standoff where most of the exit pains would fall to the departing country. In detail, after five years of QE and the ongoing pandemic emergency response, the ECB is likely to hold about half a trillion of Italian government bonds on its consolidated balance sheet by year-end 2020 (up from roughly EUR 400 bn pre-crisis), roughly 20% of Italian debt outstanding.

As seen in Figure 1, this direct exposure is augmented by the corollary Target 2 imbalance, where Italy is currently in deficit of roughly EUR 430 bn and is likely to exceed half a trillion by year-end. The latter is currently just an accounting figure, but this would become a real liability in the event of an Italian exit. Germany’s overall Target 2 surplus remains close to its all-time highs near one trillion euros. A shrunken eurozone would require remaining members to recapitalize the ECB on all these losses, with Germany by far being the largest shareholder.

Third, the Covid-19 crisis is transforming European politics, particularly in Germany. There has been a notable shift in public opinion perceiving this crisis as a shared challenge. In turn, the Angela Merkel government has stressed European solidarity, and the leadership race to succeed her looks increasingly favorable to Armin Laschet, the minister president of the North Rhine-Westphalia region, who has an even more constructive view of Germany’s role in Europe. Any German governmental decision in support of the ECB actions would obviate this week’s court decision, which stressed that economic and fiscal policy impacts require German governmental approval. None of this will bring about the long-desired fiscal union or debt mutualization, but the range of policy options and the degree of fiscal transfers will certainly be greater than any time since the creation of the euro. 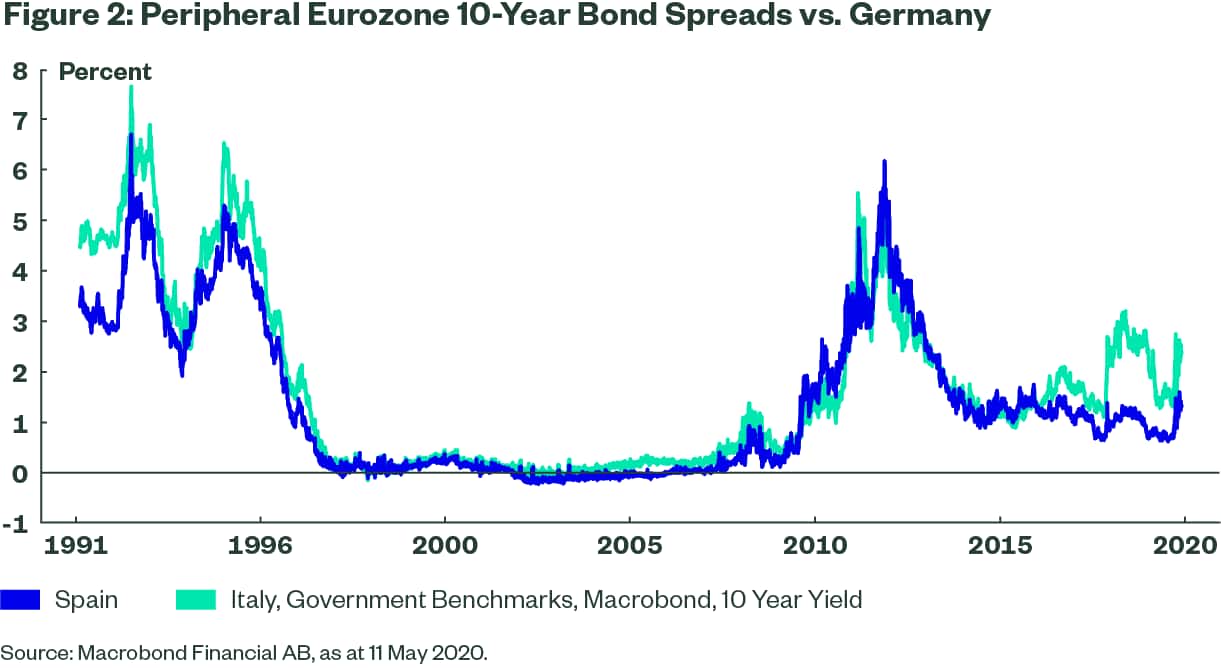 In the interim, the patchwork of measures already in place are quite durable. As seen in Figure 2, spreads may have widened, but this does not signal severe distress. They remain much lower than during the 2011-2012 crisis and even below the reign of the Lega-Five Star government in 2018-2019. Moreover, actual debt servicing costs remain more muted. The 10-year yield on Italian debt stands below 2% and its 5-year average. ECB bond purchases will ensure yields remain at these levels. Factoring in the estimated fiscal support of approximately EUR 150 bn from the various EU programs (SURE, EIB, Recovery Fund) and a possible concessional credit line from the European Stability Mechanism worth 2% of GDP, Italy’s need to tap private sector lenders is limited despite the blowout in its deficit. Thus, there is very little immediate rollover risk and no expected spike in spreads over the course of the coming months.

In the long term, the challenges remain and the ECB’s role as a monetary financer will need to be legitimized or larger scale fiscal support will be required. The irony is that the Federal Constitutional Court (of all institutions) has implicitly suggested that the ECB actions require the approval of fiscal authorities – i.e., signaling that a de facto end to the ECB’s independence would be in line with the legal requirements. The jury is still out regarding whether the German judges imagined such an outcome.

First, despite an initial widening of spreads and a weakening of the currency, we would expect the reverse to happen as the contours of European support become clearer. The euro may also benefit from a more skillful exit from the lockdown compared to the US dollar, as well as from the latter’s growing instability ahead of the US presidential election. Second, the key political variables to watch are French positioning within Europe as well as domestic German politics and the race to succeed Ms. Merkel. The core problem has been a political incongruity of the eurozone to its economic fundamentals, so watching whether that incongruity shrinks or widens is the best predictor of the strength of European policy actions.

The views expressed in this material are the views of Elliot Hentov through 14 May 2020 and are subject to change based on market and other conditions. This document contains certain statements that may be deemed forward looking statements. Please note that any such statements are not guarantees of any future performance and actual results or developments may differ materially from those projected.