The Inflation Reduction Act of 2022 aims to lower energy and health care costs for American families while helping the United States to achieve its net zero ambitions. The Act includes important provisions that promote the use of renewable energy and reduce greenhouse gas emissions, which we believe will create opportunities for companies and investors.

US President Joe Biden signed into law the Inflation Reduction Act (IRA) on August 16, 2022. The law calls for investments of $437 billion over the 10 years from 2022 to 2031, of which $369bn is for investments towards energy security and climate change.1 This article highlights some of the key areas within energy transition that are impacted by the IRA, a topic that we have focused on in previous articles.2

Highlights of the Act

The clean energy part of the package touches almost every sector within energy transition and calls for about $270bn of investments in the form of tax credits. Broadly, the tax incentives are structured as two-tiered incentives, providing a base rate and then a bonus rate if certain wage and apprenticeship requirements are met — more clarity from the Internal Revenue Service (IRS) is needed on what that exactly entails. For specific sectors, there is an extra incentive based on location, such as a wind farm in a low-income community or where a coal-fired plant has been retired, while there are incentives for domestic manufacturing in other sectors. 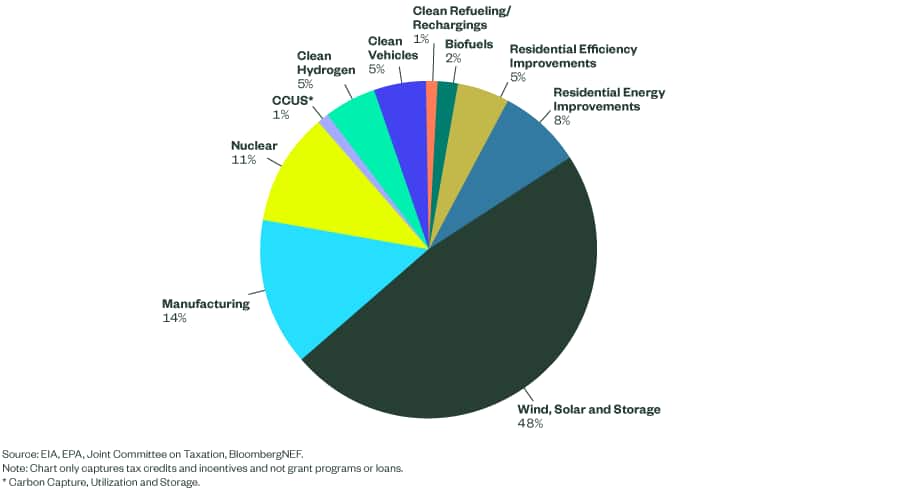 Key highlights for some of the major sectors within energy transition include:

1  Renewable Energy Wind, solar and storage tax credits account for about half of the $270bn of investments. There are two important aspects to this:

a. The phasing out of these credits is now linked to total emissions in the US (over five years once US sector emits 75% less carbon than in 2022) rather than over a fixed period of time. This provides an enormous amount of visibility and longevity to these projects

b. A new system gets phased in where all generators of zero-carbon energy would get compensated similarly

2  Nuclear The US nuclear fleet is recognized for its low carbon profile that creates a price floor for every MWh generated, as well as creating a ceiling that recognizes the current high power price environment.

4  Electric Vehicles Continuation of the $7,500 credit on certain new EVs, including fuel-cell vehicles, and the removal of the manufacturer-level cap. However, half of the credit is based on domestic mineral content and half on domestic battery manufacture. Stricter rules are also applied that exclude high-income buyers and pricier models.

Criticisms of the Act

1 Combining credits with organized labor and domestic production requirements would likely mean that any ‘incremental’ effect of the IRA is felt over time, rather than immediately as the rules get clarified further. Indeed, in updating their US power supply forecast, Morgan Stanley noted that their 2030 renewable penetration estimate remained at 42% versus prior forecasts, while 2035 renewable penetration increased marginally to 57% from 55%.4

2  The International Energy Agency (IEA) has estimated global clean energy investments of more than $4 trillion annually in its road map to net zero by 2050. According to Bloomberg, the scale of the IRA is smaller than the EU Green Deal or annual investments in China.5

3  Unlike the EU, the US has consistently avoided adopting a federal carbon policy and this was not addressed in the IRA.

5  Credits for EV batteries have a local content provision that ignores China’s dominance in processing the metals used in batteries.

6  The costs of credits is an estimate that could very well rise when greater clarity on details emerges, with offsets coming from higher taxes. 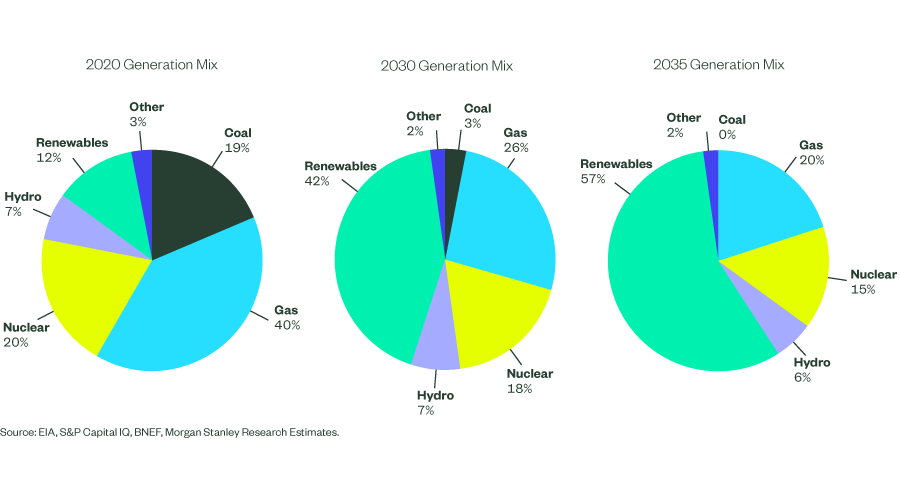 On the face of it, the renewables industry emerges as a winner from the IRA, getting as much as half of the allocation of tax credits. While we continue to think this industry will remain the single biggest beneficiary, it is debatable whether the trajectory of renewable additions received a sustainable uplift from the IRA alone. For instance, a tax extenders package before the end of a year has become the norm, and renewable builds are already the cheapest forms of power generation.6 Thinking about it another way, the positive impact from visibility of tax credits is offset by lack of any change to the permitting process, infrastructure build-out or, potentially, domestic organized labor requirements that will need clarity from the IRS on implementation. We think the incremental benefit of this Act is towards hydrogen, which has sub-scale end-market development outside of its traditional use and is not cost competitive without subsidies.7 Besides hydrogen, we think the carbon capture industry could see more rapid development with the 70%–270% increase in 45Q credits.

Over the more immediate time horizon, we expect to see more announcements of hydrogen blending within refineries, as well as with natural gas as a source of fuel. Already deployed in heavy equipment like forklifts, hydrogen could be more rapidly deployed for buses and trucks. We could also see areas of industry, like steelmaking, step up projects that utilize hydrogen. Use of carbon capture can also be put to immediate use by the refining industry. In Europe and Asia, there has been a significant shift in demand for liquefied natural gas (LNG), and a greener LNG would make it an easier sell.

A preliminary analysis from Princeton University8 determined that the Inflation Reduction Act could cut US annual GHG emissions in 2030 to about one billion tons below current policy levels — this would close two-thirds of the gap towards a pathway to net zero by 2050. This represents good progress, and comes on the heels of the latest update from the Intergovernmental Panel on Climate Change (IPCC) in April 2022,9 — that report stated that, in all likelihood, we will not be able to limit global warming to 1.5 degrees Centigrade. We believe that more work needs to be done, but the Inflation Reduction Act is a step in the right direction.

The Fundamental Growth and Core (FGC) Equity team believes the transition to a carbon-free economy will present companies with tremendous growth opportunities that will create long-term value for all stakeholders. The team strives to understand how broad legislation like the IRA can impact companies’ business models and how they convert the energy transition challenge into an opportunity to drive long-term financial performance.

The FGC team has developed a comprehensive scoring mechanism which considers a company’s plan for climate transition, along with the risks and opportunities that lie ahead as it transitions into a low-carbon economy. These climate score cards are based on available data from company disclosures but they also leverage the extensive experience and knowledge of the FGC equity research analysts. The FGC team targets investment opportunities in companies that have best-in-class climate transition plans that in combination with our Confidence Quotient (CQ) proprietary research framework, allows us to identify businesses we believe will be long-term winners.

Important Information
The whole or any part of this work may not be reproduced, copied or transmitted or any of its contents disclosed to third parties without State Street Global Advisors’ express written consent.

The views expressed in this material are the views of Rajat Sarup through September 2, 2022 and are subject to change based on market and other conditions. This document contains certain statements that may be deemed forward looking statements. Please note that any such statements are not guarantees of any future performance and actual results or developments may differ materially from those projected.

Equity securities may fluctuate in value and can decline significantly in response to the activities of individual companies and general market and economic conditions. Past performance is not a guarantee of future results. Investing involves risk including the risk of loss of principal.