Consumer price inflation is surging globally and an intense debate is raging as to whether this is merely a transient phenomenon reflecting abnormally low base effects or something of a more lasting nature. We see upside risks to inflation in the short term, but to us inflation is a process, not an event. Although we see incipient shifts that could push us into a higher inflation regime over time, it is not yet clear if something systemic is changing the inflation process itself.

Consumer price inflation (CPI) has accelerated sharply and broadly in recent months. US CPI inflation surged to 4.2% YoY in April, the highest level since 2008 and the core inflation measure hit 3.0% YoY, its highest level since 1995. The vast majority of central banks – particularly in developed markets (DM) – have expressed little worry in the face of rising inflation. Given the persistent inflation “deficit” of the last decade, a temporary inflation overshoot is seen as the desirable outcome. It is the goal enshrined in the US Fed’s new policy framework of Average Inflation Targeting (AIT).

Central banks are probably right that most of the current inflation spike is transient in nature. However, even if this is true in general, there remains the possibility that, while transient, the inflation spike is either more severe in its intensity or slower to unwind than currently anticipated. Does “transient” imply normalization within a three-, six- or twelve-month horizon? Or longer?

Most leading inflation indicators, including commodity prices or shipping costs, remain in line with and do not yet indicate a break with prior post-recession recovery patterns. However, a few others suggest that something more acute is playing out at the moment. For example, global manufacturing supply chains appear more stretched today than in the aftermath of the Global Financial Crisis (GFC), with global manufacturing capacity utilization at a record high and backlogs at the highest level since 2004 (Figure 1). It is a true testament to the strength of current demand that backlogs are so elevated despite record capacity utilization. 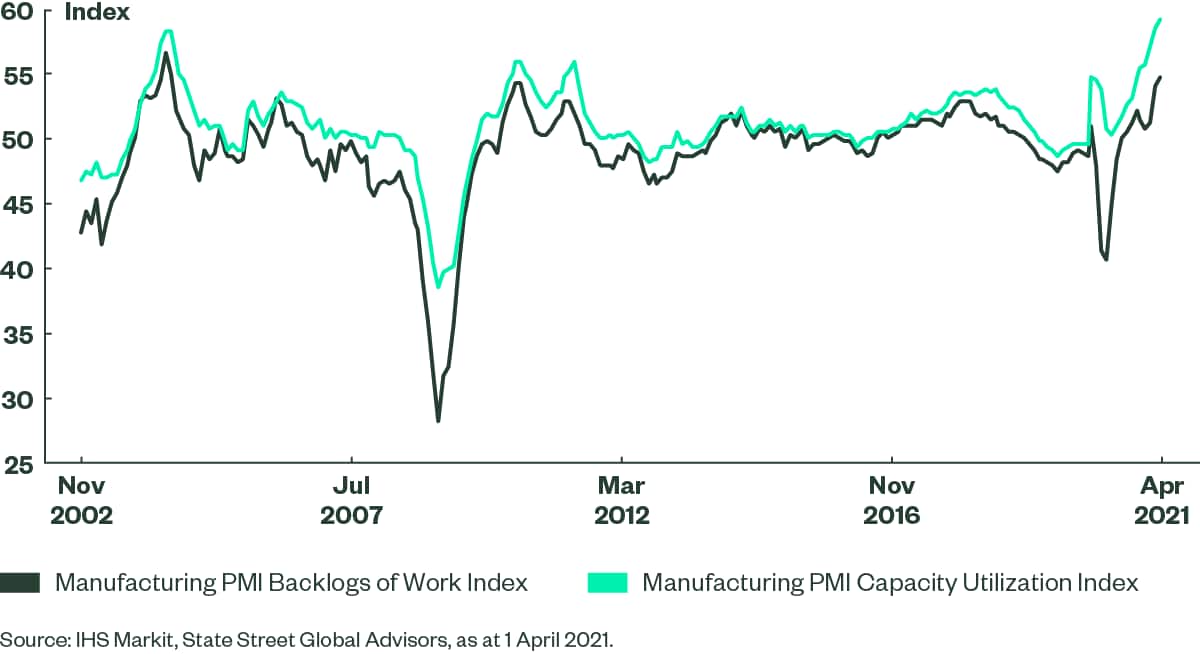 There are also important divergences beneath the top-line world aggregate metrics. For instance, while the input and output price indexes from the IHS Markit Composite Purchasing Managers’ Indexes (PMI) for emerging markets (EM) are just at or closing in on their post-GFC highs (Figure 2), the same metrics for DM have long exceeded those levels (Figure 3). In other words, relative to history, these particular leading indicators of DM inflation are flashing a more intense red than at any time since the GFC. 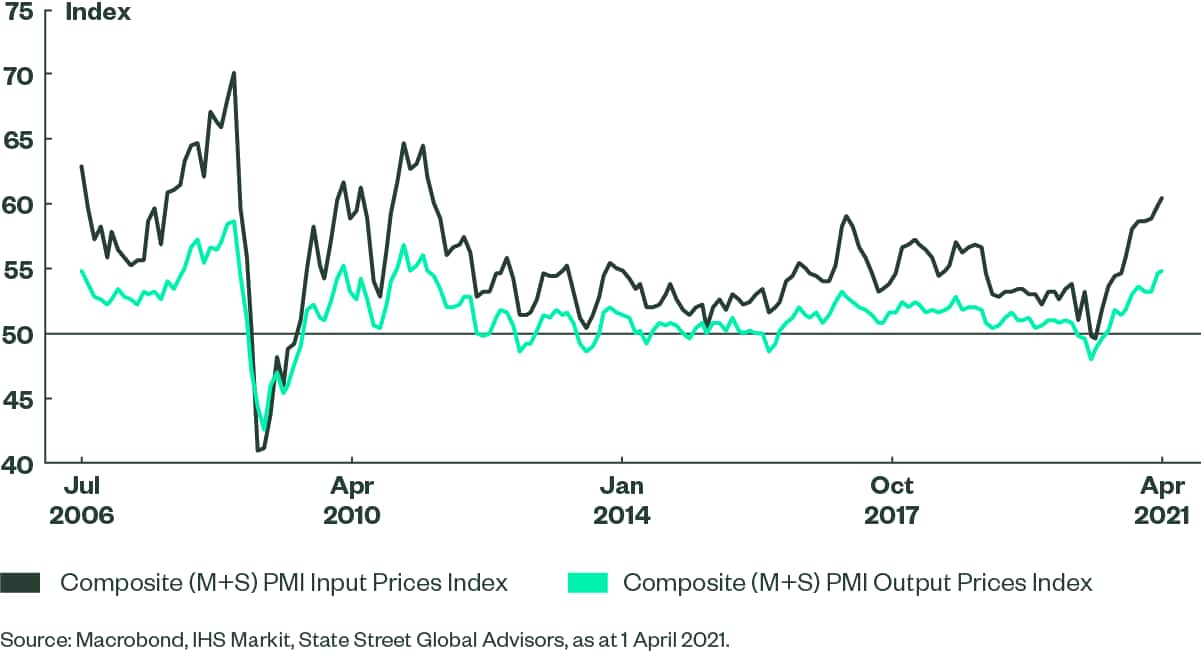 That cyclical inflationary pressures appear more acute in DM is an intriguing break from the past, but it makes sense given DM’s lead in vaccine rollouts and their more aggressive fiscal/monetary policy support during the crisis. That US households today have nearly US$3 trillion in liquid savings (as of Q4, before the last round of stimulus checks) speak volumes about the demand backdrop and, by implication, the pricing power backdrop in which businesses operate today.

Pricing power may indeed be the most critical differentiator between the inflation experience coming out of the COVID-19 crisis and that of the post-GFC period. The unprecedented high levels of household savings, not only in the United States but also in Europe, make for a consumer who is better able to absorb and weather price increases. With severe strain on supply chains, skyrocketing input prices and severe constraints to labor supply, many businesses may have little choice but to raise prices.

There is broad anecdotal evidence of a shift in this direction. Respondent comments in the ISM surveys indicate that broad and intense price pressures across supply chains are forcing firms to pass some price increases to their customers. Warren Buffet was recently quoted by the Wall Street Journal stating: “we’re rising prices, people are rising prices on us, and it’s being accepted”.1

How quickly inflation subsides from its peak will depend largely on how long this acceptance persists in the marketplace. We lean toward an extended unwind to cyclical inflation pressures on the basis that exhausting the huge pent-up demand will take more than just a few quarters. Even if inflation pressures were to eventually subside on the manufacturing side, new waves of pressure could develop in services as we reach full normalization. The eventual recovery in the rental market, which was disrupted during the pandemic, should also put a floor under inflation next year.

Is the Inflation Process Changing?

While a correct appreciation of the full cyclical intensity of inflation over the next few quarters is critical for optimal tactical asset allocation decisions, long-term investors are most concerned about the structural inflation backdrop. In this regard, they are quite similar to central bankers, who also downplay short-term inflation volatility, focusing instead on long-term trends. After all, if today’s elevated inflation is primarily driven by pent-up demand and supply chain strains, we know that those issues will eventually be resolved and taken out of the equation. We therefore must ask: what is left to drive inflation in the future?

Here we come to a point often reiterated in the past: inflation is a process, not an event. In order to assess whether something is structurally changing on the inflation front, we must consider whether the inflation “process” itself is being sustainably altered. There are several trend shifts that suggest we might indeed be on the verge of such a change. The challenge, however, is that these changes are too recent to be confidently extrapolated into the future. Moreover, many are also subject to political risk that could either slow or accelerate them in coming years.

As frustrating as this may be, the reality is that the answers to the structural inflation questions are simply not yet available. Not just to us, or to investors in general, but not even to policy makers. It is a wait-and-see game, all part of the new experiential approach to monetary and fiscal policy making that has become so broadly embraced during the COVID-19 recession. Perhaps the best approach for investors is to be willing to entertain the possibility that a new inflation regime may be brewing, and to actively monitor incoming data and policy actions that could indicate such a shift is indeed taking hold.

Thus, what are we monitoring? The list below is by no means comprehensive, but these are some of the forces that we not only consider as highly influential but also see as indicative of an inflection point relative to the past fifteen years.

Figure 4: Inflation Expectations of US Consumers Seem to Have Bottomed

Given the multiple moving pieces (short- and longer-term) around inflation, it is reasonable to expect that the volatility of inflation expectations will increase going forward. As that occurs, it is possible that the yield sensitivity to future inflation shocks actually declines. The intuition here is that as additional inflation shocks occur within that higher-inflation-expectation environment, each such event should have less of a signal component and therefore should drive a smaller yield reaction.

A higher-inflation environment – especially against a backdrop of strong demand – could be broadly supportive for equities. It would seem to imply a favorable pricing environment for firms and would therefore be supportive of corporate earnings. As always, though, investors must recognize that not all sectors of the economy – and certainly not all firms – would be equally well positioned to capitalize on this favorable macroeconomic backdrop. Finding champions in the right sectors may not be easy, but it would certainly be profitable!

The views expressed in this material are the views of the Global Macro Policy Research team through 17 May 2021 and are subject to change based on market and other conditions. This document contains certain statements that may be deemed forward looking statements. Please note that any such statements are not guarantees of any future performance and actual results or developments may differ materially from those projected.