Digital currencies are increasingly in demand across the globe. Central banks have taken notice and are investigating the creation of their own Central Bank Digital Currencies. In this article, we explain what CBDCs are, why central banks are focused on launching them, and the threats and opportunities that this development poses for players within the current financial system.

At the outset, it is important to understand what a Central Bank Digital Currency (“CBDC”) is and what it is not. A CBDC is a digital payment instrument, denominated in the national unit of account, which is a direct liability of the central bank, like cash1 – so there is a backstop and this differentiates CBDCs from cryptocurrencies. CBDCs are effectively a digital form of money that is issued and backed by central banks. Currently, only financial institutions have access to electronic central bank money in the form of reserves, while a CBDC could be used by households and businesses to make payments and store value2 . The architecture of CBDCs can differ in how they are set up and how the public and private sectors work together, but the quintessential feature is that there is direct settlement in central bank money.

The core features of any CBDC instrument and its underlying system include: ease of use; low cost; convertibility; instant settlement; continuous availability; and a high degree of security, resilience, flexibility and safety 3.

What CBDCs are not are cryptocurrencies. The fundamental difference is that CBDCs are backed by central bank reserves whereas crypto assets are privately issued and not backed by any central party. They are not considered a currency or money as they are too volatile to be a reliable medium of exchange. A CBDC is designed to be a risk-free form of a currency issued by a central bank that would serve to deliver all the key functions of money2.

Figure 1: CBDCs are a new type of central bank liability 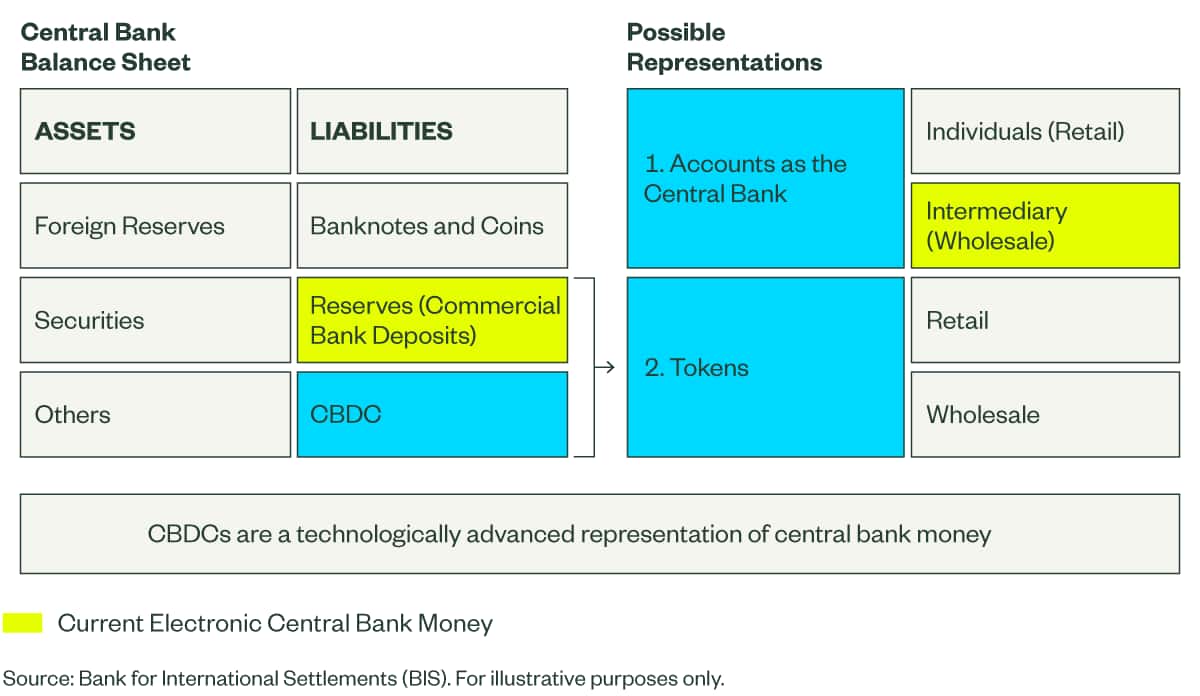 Why Central Banks Are Going Digital

If CBDCs are just another form of cash, it is logical to question why central banks require them at all. In fact, up until recently central banks themselves did not see the need for CBDCs, but the tone has now clearly changed. A recent survey found that 80% of central banks are investigating the potential of CBDC and about half have progressed beyond conceptual research to experimenting and running pilots3. The key reasons driving increased central bank interest in digital currencies include:

To Preserve Financial Stability and Central Banks’ Status: CBDCs offer many of the benefits that are already present in the current cash-based system, but the increasing popularity of stablecoins (digital assets designed to have a stable price, such as Facebook’s Diem) has helped incentivize central banks to develop their own digital assets. A stablecoin that goes mainstream is a potential threat to major central banks as an alternative method of payment. If a stablecoin was to take significant market share, the central banks would have diminished ability to influence their national money supply since they would not control the total supply of currency operating within their borders. In addition, private digital assets would take market share away from global payment systems, creating financial stability risks if it develops outside of a regulated global banking system.

As Replacement for Cash: The pandemic has accelerated the decline in the use of cash and central banks consider CBDCs as a suitable substitute. Over time, physical cash has been losing popularity as the shift to credit and debit cards, as well as electronic payments, continued unabated – the COVID-19 pandemic has simply accelerated this trend. From a practical standpoint, cash is costly to make, to store, and is easily lost; in contrast, a CBDC would be cheap to make and have a system that records the location of the digital asset. Digital transactions that take place today are all claims on physical cash, but the same transactions via CBDC would be claims to digital assets that are backed by a central bank and offer the same kind of safety as cash. 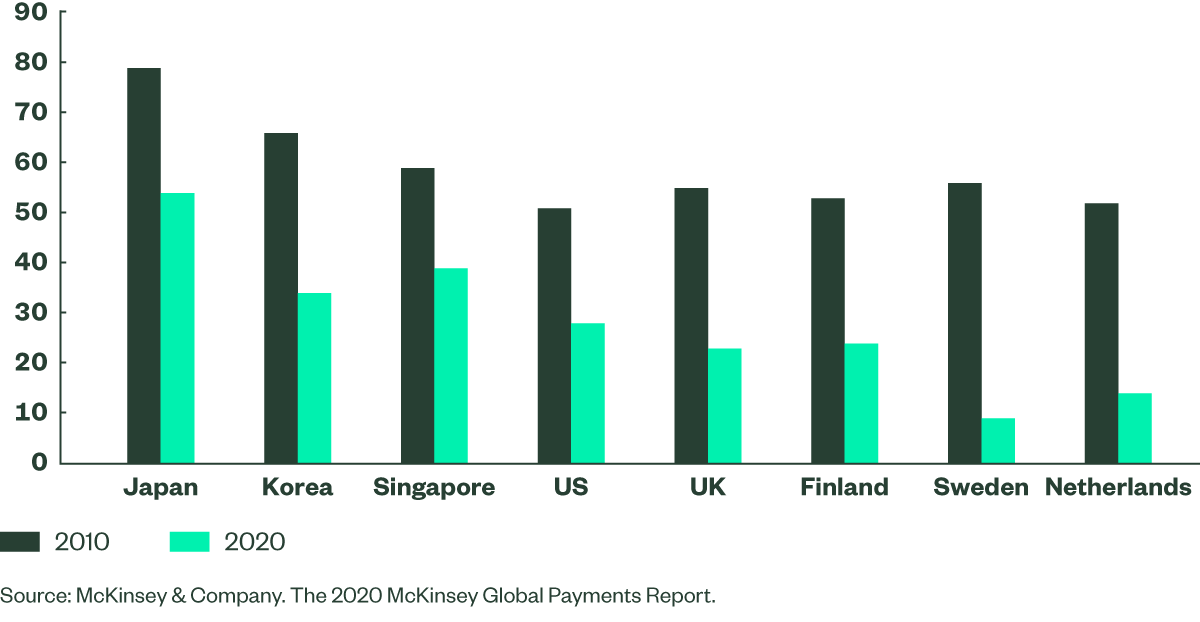 Improved Access: CBDCs are useful in improving access to central bank money for those who are on low incomes, are non-banked, and for those who live in jurisdictions where physical cash is in decline. CBDC transfers across borders offer several benefits over the current system, including settlement recording and increased liquidity, which leads to a more open and safe global monetary system. For the low income or non-banked groups, the benefit is clear: a CBDC would facilitate an almost immediate form of payment to individuals instead of sending checks via mail to low income or rural families.

“We think it is important that any potential CBDC could serve as a complement to, and not a replacement of, cash and current private-sector digital forms of the dollar, such as deposits at commercial banks”

Potential to Expose Illegal Activity: Finally, CBDCs could potentially evolve to expose illegality as it would allow for greater transparency relative to the use of banknotes. Studies have found that about a third of all US dollars in circulation are used for criminal activities and tax evasion4 . By implementing capital controls, such as limiting the amounts of cash withdrawal, electronic payments would inevitably increase – Greece’s experience serves as a good example of this when they implemented capital controls 2015. The Bank for International Settlements (BIS) has also stated that cryptocurrencies have been used to facilitate financial crimes, so offering a CBDC in place of cryptocurrency should help stem the flow of illegal money.

CBDCS and the Financial System
Threats and Opportunities

The principal concern for the existing system is that the banks and payment networks could theoretically be disintermediated by the central banks. The central banks could take deposits directly and allow for electronic payments between merchants and individuals, thus diverting revenues from banks and payment networks. However, central banks have clearly communicated that they are looking for a public-private partnership, which makes sense when one considers the cost and complexity of the distribution function of the current system. For example, central banks are unlikely to be eager to take on the burden of customer on-boarding and account maintenance; providing technology support; offering bundled services around checking and banking deposits; or creating from scratch networks of merchants willing to accept CBDCs. Commercial banks are better at client facing, account opening, and at offering more sophisticated financial products to customers.

Central banks would likely want to augment, not replace, existing hard currency, so a scenario in which central banks completely bypass the existing structures would imply that they would have to take over the running of bank branches and/or ATM networks. Furthermore, banks have historically been the most effective underwriter and distributors of credit, which is the cornerstone of creating the multiplier effect in the monetary system. In addition, bank profits fund deposit insurance and reserves for credit losses, while payment companies’ profits absorb fraud losses and fund systems for fraud prevention – both of which create an important buffer for the economy in bad times. Finally, central banks are keenly aware that they need to design a system that does not create incentives that would exacerbate stress in the economy. If everyone sought to move their money out of risky investments into CBDCs at the first sign of stress, it would result in a “bank run” of epic proportions. It seems unlikely that central banks, which in most case have spent centuries developing well-oiled national banking and payments systems, will be motivated to disintermediate existing players.

We would argue that CBDCs could represent more of an opportunity than a threat for the existing players. A widely-adopted digital currency would certainly make some banking and payment functions cheaper to operate, and this should result in overall lower costs to the current players. A nationally-sponsored digital currency could bring people who were previously “unbanked”, into the electronic banking system and make it possible for banks to serve them profitably – this would increase the total addressable market for both banks and payments. The potential reduction in fraud and theft would also accrue benefits to the banking system. CBDCs will also likely foster continued innovation in the banking system and support fintech, which in turn should make the whole system more efficient.

In Conclusion – CBDCs Are Coming

We believe that CBDCs are not just likely, but a foregone conclusion – the efficiencies and benefits of digital currencies are just too great for central banks to ignore. However, we envision a world where the current banking system works in partnership with the central banks, and the benefits of CBDCs accrue to both. Private capital in conjunction with government regulatory support will be critical, as it has always been, to support a well-functioning national banking system. In this world, high-quality financial and payments companies will have the ability to generate sustainable growth – from an investment perspective, we believe these companies will provide good return opportunities when purchased at reasonable valuations.

The views expressed in this material are the views of the Fundamental Growth and Core Equity Team through the period ended 31 October 2021 and are subject to change based on market and other conditions. This document contains certain statements that may be deemed forward-looking statements. Please note that any such statements are not guarantees of any future performance and actual results or developments may differ materially from those projected.

This communication is directed at professional clients (this includes eligible counterparties as defined by the appropriate EU regulator) who are deemed both knowledgeable and experienced in matters relating to investments. The products and services to which this communication relates are only available to such persons and persons of any other description (including retail clients) should not rely on this communication
The information provided does not constitute investment advice as such term is defined under the Markets in Financial Instruments Directive (2014/65/EU) and it should not be relied on as such. It should not be considered a solicitation to buy or an offer to sell any investment. It does not take into account any investor’s or potential investor’s particular investment objectives, strategies, tax status, risk appetite or investment horizon. If you require investment advice you should consult your tax and financial or other professional advisor.

Equity securities may fluctuate in value in response to the activities of individual companies and general market and economic conditions.
The trademarks and service marks referenced herein are the property of their respective owners. Third party data providers make no warranties or representations of any kind relating to the accuracy, completeness or timeliness of the data and have no liability for damages of any kind relating to the use of such data.