Another Strong Year for European ETFs – Against All Odds

European-domiciled ETFs enjoyed a strong 2020, gathering $118 billion of net inflows, almost matching the 2019 number ($125 billion). Although, compared to a year earlier, the quantum was not too different: the top two drivers of those flows swapped places as equity accounted for 54% of 2020 net inflows ($63.6 billion) while fixed income captured 32% of overall flows ($38 billion). Commodity exposures picked up $15.9 billion, mainly driven by gold exposures as the precious metal reached all-time highs exceeding $2,000 per ounce for some time earlier in the year.

The evolution of flows into ETFs reflected performance and market sentiment throughout the year. After a strong January and muted but still positive flows in February, we saw an unprecedented $23 billion of net outflows in March as markets collapsed. That was also the time when precious metals exposures started to enjoy massive net inflows as investors looked for relative safety.

Once the situation stabilized, we initially saw strong flows into fixed income exposures and a continuation of flows into precious metals in Q2. The second part of the year, however, was marked by a spectacular comeback for equities, which posted $63 billion of net inflows since July, fueled by rallying equity prices. Vaccine news accelerated this flow trend and also triggered some outflows from precious metals as markets went strongly risk on. 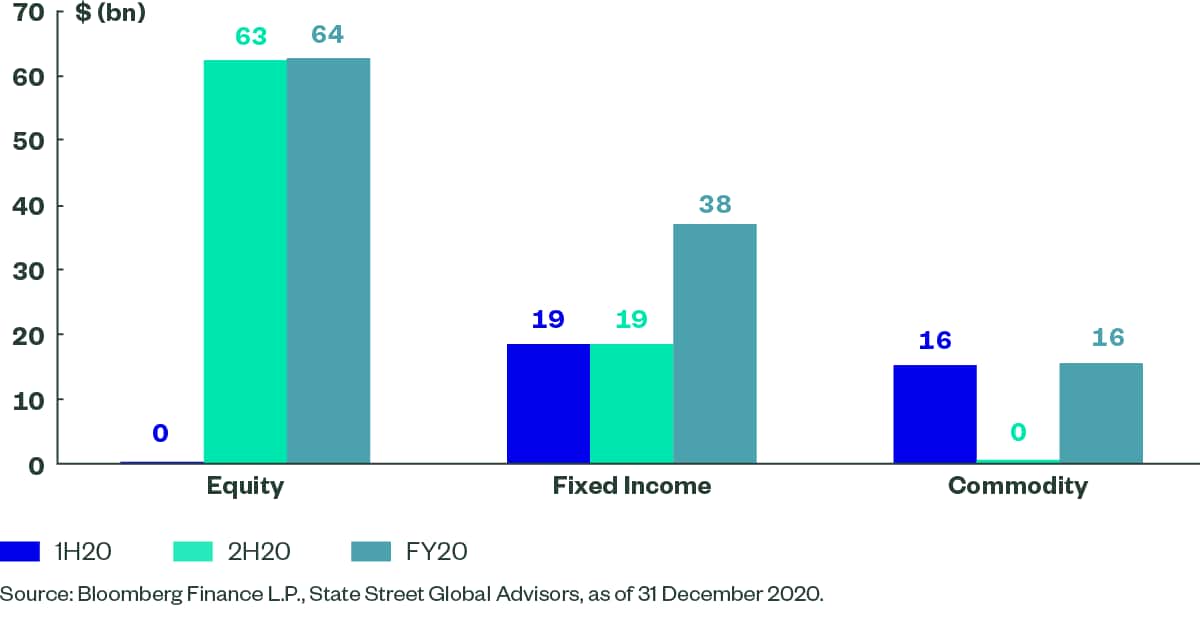 Equity Investors Went Global But Also Favoured US and EM

Global exposures dominated equity flows in 2020, gathering $36 billion – or more than 50% of all equity flows. Investors who did not go global preferred US over Europe and the UK due to the lower magnitude of lockdowns and local uncertainties such as Brexit.

Emerging markets initially suffered net outflows as COVID-19 had severe consequences particularly for countries like India and Brazil. However, as the rally and hope for a vaccine progressed, and economies started to rebound sharply, flows into emerging markets returned and, led by China, brought full-year net inflows to $8.3 billion.

Within sectors, technology gathered $5.5 billion as tech companies provided both growth and a degree of risk protection as the demand for software and hardware remained robust. Health care initially followed, but inflows into that sector lost steam in the second half of the year as sentiment improved and investors looked for returns elsewhere.

Government and corporate exposures captured a combined $28.7 billion of net inflows in 2020, accounting for more than 75% of total fixed income net inflows. This marked another strong year as the fixed income offering expanded, particularly in the ESG space. However, it is equally important that, as a product, fixed income ETFs proved resilient against deep market shocks and served as a price discovery tool where no price for the underlying asset was available – for example when markets first digested the COVID-19 crisis in March 2020. The crisis represented a great test for fixed income ETFs, and the ETFs passed. 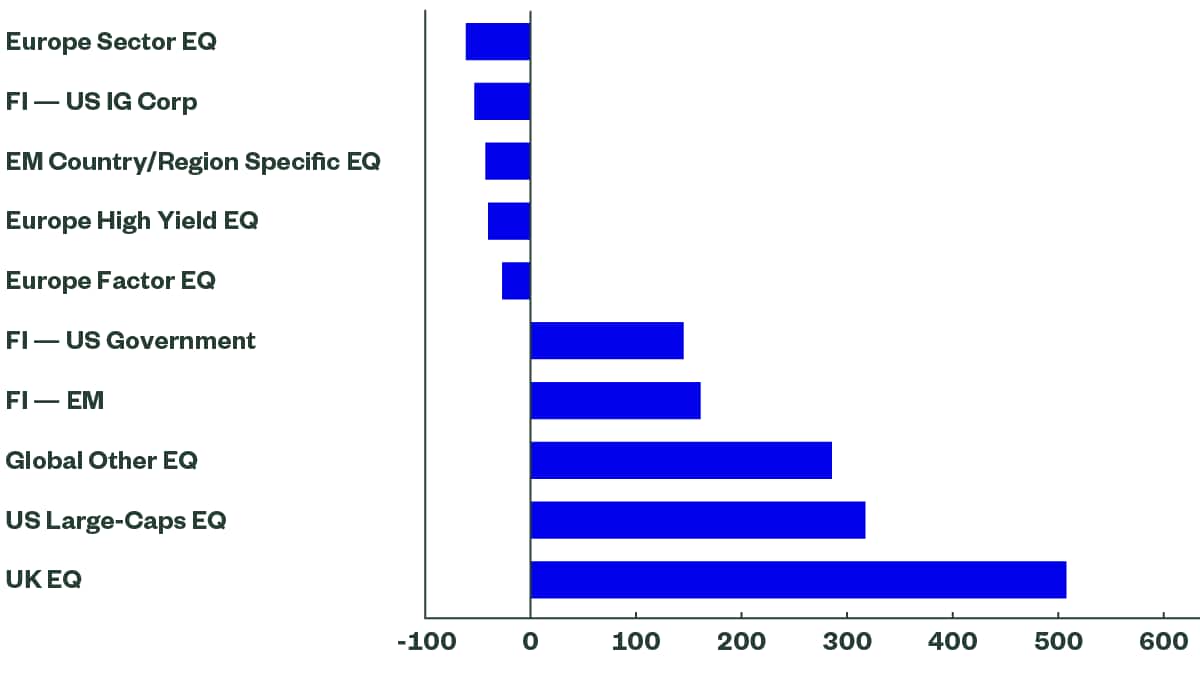 Sources: Bloomberg Finance L.P., for the period 28-31 December 2020. Flows are as of date indicated and should not be relied upon as current thereafter. This information should not be considered a recommendation to invest in a particular sector or to buy or sell any security shown. It is not known whether the sectors or securities shown will be profitable in the future.

Israel: No action has been taken or will be taken in Israel that would permit a public offering of the Securities or distribution of this sales brochure to the public in Israel. This sales brochure has not been approved by the Israel Securities Authority (the ‘ISA’). Accordingly, the Securities shall only be sold in Israel to an investor of the type listed in the First Schedule to the Israeli Securities Law, 1978, which has confirmed in writing that it falls within one of the categories listed therein (accompanied by external confirmation where this is required under ISA guidelines), that it is aware of the implications of being considered such an investor and consents thereto, and further that the Securities are being purchased for its own account and not for the purpose of re-sale or distribution. This sales brochure may not be reproduced or used for any other purpose, nor be furnished to any other person other than those to whom copies have been sent. Nothing in this sales brochure should be considered investment advice or investment marketing as defined in the Regulation of Investment Advice, Investment Marketing and Portfolio Management Law, 1995 (“the Investment Advice Law”). Investors are encouraged to seek competent investment advice from a locally licensed investment advisor prior to making any investment. State Street is not licensed under the Investment Advice Law, nor does it carry the insurance as required of a licensee thereunder. This sales brochure does not constitute an offer to sell or solicitation of an offer to buy any securities other than the Securities offered hereby, nor does it constitute an offer to sell to or solicitation of an offer to buy from any person or persons in any state or other jurisdiction in which such offer or solicitation would be unlawful, or in which the person making such offer or solicitation is not qualified to do so, or to a person or persons to whom it is unlawful to make such offer or solicitation. Investing involves risk including the risk of loss of principal. The whole or any part of this work may not be reproduced, copied or transmitted or any of its contents disclosed to third parties without SSGA’s express written consent. The trademarks and service marks referenced herein are the property of their respective owners. Third party data providers make no warranties or representations of any kind relating to the accuracy, completeness or timeliness of the data and have no liability for damages of any kind relating to the use of such data.

This document contains certain statements that may be deemed forward looking statements. Please note that any such statements are not guarantees of any future performance and actual results or developments may differ materially from those projected.

Past Performance is not a guarantee of future results.

SPDR ETFs is the exchange traded funds (“ETF”) platform of State Street Global Advisors and is comprised of funds that have been authorised by Central Bank of Ireland as open-ended UCITS investment companies.