Emerging market (EM) local currency debt has had a strong run since April 2020, although the asset class seemed to hit the buffers in August with gains from the ongoing weakening of the USD and coupon flows being offset by falling fixed income prices. It’s fair to say that August was not kind to government fixed income generally but the lack of performance from EMs has been disappointing given the risk sentiment backdrop. From a historical context, the Bloomberg Barclays Emerging Markets Local bond index is 79% correlated with global high yield against just 29% for US aggregate, which largely consists of US Treasuries1. In other words, it behaves far more like a risk asset than a risk-free rate.

Times have changed, however, and investments are now all scrutinised through a COVID-19 lens and, in this respect, EMs have not fared well. With a limited ability to protect workers and businesses in the same way that developed nations can, many economies have reopened only to see a surge in infections.

In addition, many countries are undergoing an inflation surge on the rebound in oil and as currency depreciation seen earlier in the year manifests itself in higher import prices (see the State Street Global Markets publication, EM Inflation in Focus: Higher EM, Lower Asia). This certainly has the potential to bring to a halt to policy easing in some parts of the EM complex.

That said, from the perspective of being a yield enhancer and a risk diversifier, we continue to view EM as an essential part of any portfolio allocation, and there remain several factors that still support EM debt:

Concerns about weak growth and a resurgence in inflation in some EM nations are real. The countries identified as most at risk of rising inflation by the PriceStats® indicators are those outside of Asia, with Turkey and three Latin American countries (Brazil, Colombia and Uruguay) deemed the most at risk. The geographical focus of the Bloomberg Barclays Emerging Markets Local Bond Index reduces these risks with a large allocation to Asia (48.7%) compared to 30.5% for the JP Morgan EM Local Government Bond Index. This means relatively less weight to the Americas, with no exposure to Uruguay and a combined 11.2% to Brazil and Colombia (the JP Morgan index has 15.5%). Finally, the weighting of Turkey is light at just 1.7%.

For those still wary that the near-term inflation surge will prove detrimental to EM debt, there is the SPDR Bloomberg Barclays EM Inflation Linked Local Bond UCITS ETF. Aside from a divergence in 2019, the index tracked by this ETF has typically displayed the same inverse correlation with the USD that nominal debt does. The chart below shows the index plotted against the inverted value of the DXY (trade-weighted USD) and it does highlight the tendency of the index to push higher on USD weakness. So even though it is inflation proofed, it still behaves in the same way as a local currency fund.

EM Inflation-Linked Index Has Typically Moved Inversely to the USD 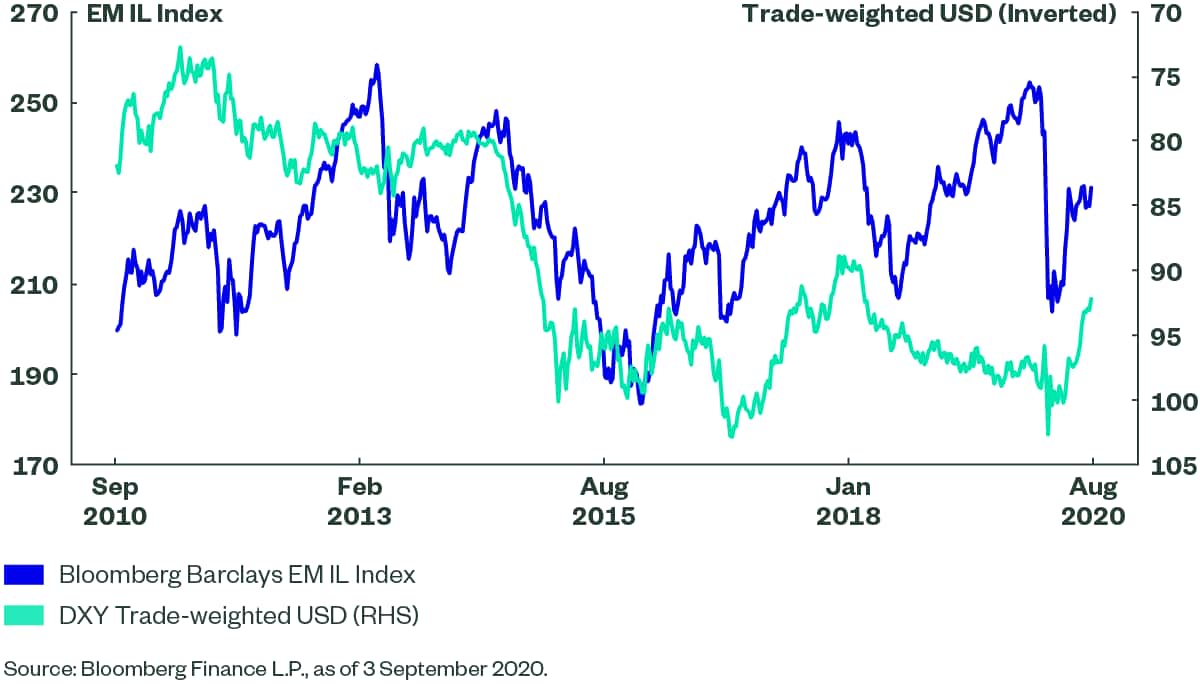 In terms of its geographical distribution, the inflation-protected index fits well with Bloomberg Barclays Emerging Markets Local Bond Index. It has low exposure to Asia (3.7%), where we view inflation as being less of a threat and where the Bloomberg Barclays Emerging Markets Local Bond Index is heavily exposed. Conversely, it is 42.5% allocated to the Americas and 16% to Turkey, where we believe inflation pressures are the strongest and therefore fixed income portfolios the most in need of protection.

Lastly, the Bloomberg Barclays EM Inflation Linked Local Bond Index has enjoyed a bounce, returning around 1% over the past month, but year-to-date performance remains well short of the nominal local currency index. A regression of the EM Inflation Linked Index against the nominal Emerging Markets Local Bond Index suggests the inflation index remains close to 10 points cheap to the level implied by the local currency index.3 If flows continue to come into EM debt funds then there is certainly scope for the inflation-linked index to play catch-up.

How to play this theme

Investors can play the emerging market debt theme described above with SPDR ETFs. To learn more about the fund, and to view full performance history, please follow the links below: 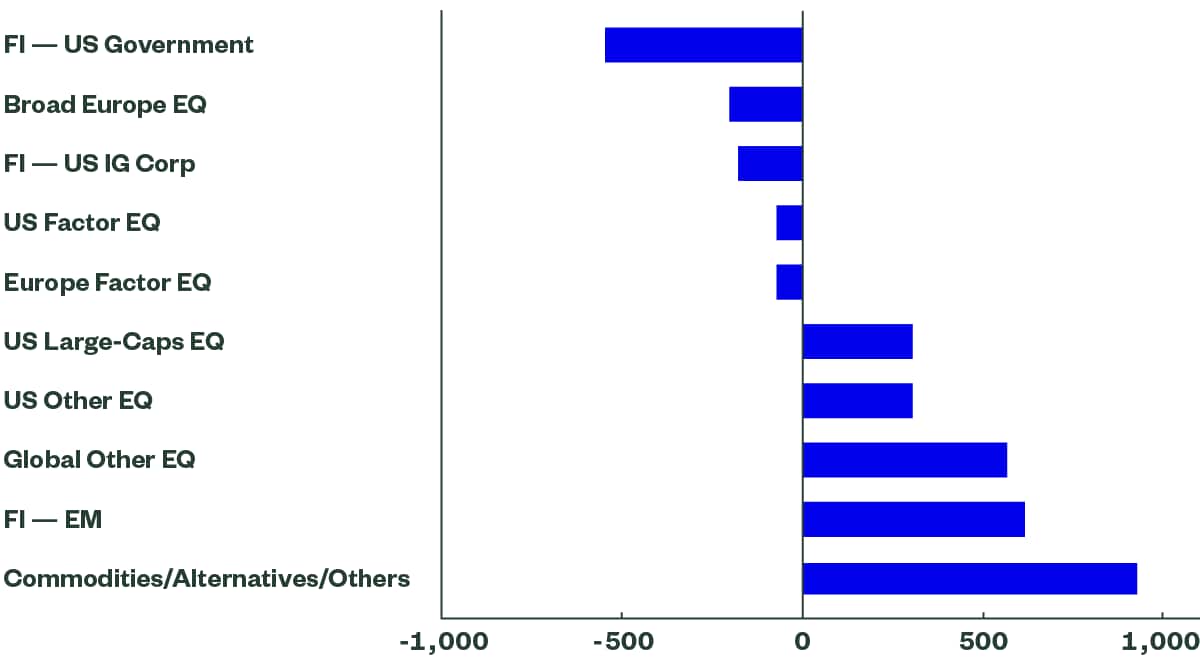 Sources: Bloomberg Finance L.P., for the period 27 August – 3 September 2020. Flows are as of date indicated and should not be relied upon as current thereafter.

1Based on 10 years of monthly data.

Accordingly, the Securities shall only be sold in Israel to an investor of the type listed in the First Schedule to the Israeli Securities Law, 1978, which has confirmed in writing that it falls within one of the categories listed therein (accompanied by external confirmation where this is required under ISA guidelines), that it is aware of the implications of being considered such an investor and consents thereto, and further that the Securities are being purchased for its own account and not for the purpose of re-sale or distribution.

This sales brochure may not be reproduced or used for any other purpose, nor be furnished to any other person other than those to whom copies have been sent.

Netherlands: This communication is directed at qualified investors within the meaning of Section 2:72 of the Dutch Financial Markets Supervision Act (Wet op het financieel toezicht) as amended. The products and services to which this communication relates are only available to such persons and persons of any other description should not rely on this communication. Distribution of this document does not trigger a licence requirement for the Companies or SSGA in the Netherlands and consequently no prudential and conduct of business supervision will be exercised over the Companies or SSGA by the Dutch Central Bank (De Nederlandsche Bank N.V.) and the Dutch Authority for the Financial Markets (Stichting Autoriteit Financiële Markten). The Companies have completed their notification to the Authority Financial Markets in the Netherlands in order to market their shares for sale to the public in the Netherlands and the Companies are, accordingly, investment institutions (beleggingsinstellingen) according to Section 2:72 Dutch Financial Markets Supervision Act of Investment Institutions. Norway: The offering of SPDR ETFs by the Companies has been notified to the Financial Supervisory Authority of Norway (Finanstilsynet) in accordance with applicable Norwegian Securities Funds legislation. By virtue of a confirmation letter from the Financial Supervisory Authority dated 28 March 2013 (16 October 2013 for umbrella II) the Companies may market and sell their shares in Norway.

Switzerland: The collective investment schemes referred to herein are collective investment schemes under Irish law. Prospective investors may obtain the current sales prospectus, the articles of incorporation, the KIID as well as the latest annual and semi-annual reports free of charge from the Swiss Representative and Paying Agent, State Street Bank International GmbH, Munich, Zurich Branch, Beethovenstrasse 19, 8027 Zurich as well as from the main distributor in Switzerland, State Street Global Advisors AG, Beethovenstrasse 19, 8027 Zurich. Before investing please read the prospectus and the KIID, copies of which can be obtained from the Swiss representative, or at ssga.com.

United Kingdom: The Companies are recognised schemes under Section 264 of the Financial Services and Markets Act 2000 (“the Act”) and are directed at ‘professional clients’ in the UK (within the meaning of the rules of the Act) who are deemed both knowledgeable and experienced in matters relating to investments. The products and services to which this communication relates are only available to such persons and persons of any other description should not rely on this communication. Many of the protections provided by the UK regulatory system do not apply to the operation of the Companies, and compensation will not be available under the UK Financial Services Compensation Scheme.

SPDR ETFs is the exchange traded funds (“ETF”) platform of State Street Global Advisors and is comprised of funds that have been authorised by Central Bank of Ireland as open-ended UCITS investment companies.

State Street Global Advisors SPDR ETFs Europe I & II plc issue SPDR ETFs, and is an open-ended investment company with variable capital having segregated liability between its sub-funds. The Company is organised as an Undertaking for Collective Investments in Transferable Securities (UCITS) under the laws of Ireland and authorised as a UCITS by the Central Bank of Ireland.

The information provided does not constitute investment advice. It should not be considered a solicitation to buy or an offer to sell any investment. It does not take into account any investor’s or potential investor’s particular investment objectives, strategies, tax status, risk appetite or investment horizon. If you require investment advice you should consult your tax and financial or other professional advisor. All information is from SSGA unless otherwise noted and has been obtained from sources believed to be reliable, but its accuracy is not guaranteed. There is no representation or warranty as to the current accuracy, reliability or completeness of, nor liability for, decisions based on such information and it should not be relied on as such.

The views expressed in this material are the views of SPDR EMEA Strategy & Research through the period ending 27 August 2020 and are subject to change based on market and other conditions. This document contains certain statements that may be deemed forward-looking statements. Please note that any such statements are not guarantees of any future performance and actual results or developments may differ materially from those projected.

Investing in foreign domiciled securities may involve risk of capital loss from unfavourable fluctuation in currency values, withholding taxes, from differences in generally accepted accounting principles or from economic or political instability in other nations.

You should obtain and read the SPDR prospectus and relevant Key Investor Information Document (KIID) prior to investing, which may be obtained from spdrs.com. These include further details relating to the SPDR funds, including information relating to costs, risks and where the funds are authorised for sale.