How We Approach Defensive Equity Investing: The Health Care Example

Market volatility spikes in the wake of the COVID-19 crisis caused many investors to consider how they might build more resilient equity portfolios. In Active Quantitative Equity (AQE), we believe defensive equities can play a key role in that effort.

Health Care is an excellent example of where we look to invest in defensive equities, because the sector exhibits both resiliency in times of crisis as well as consistent and stable growth and profitability during recovery periods. We’ll unpack each of these dimensions of Health Care’s potential, beginning with the sector’s performance in the current crisis.

Resiliency During the COVID-19 Crisis

Health Care has historically performed relatively well during times of crisis. The sector’s performance in terms of returns during the Global Financial Crisis (GFC) and the bursting of the Tech Bubble was second only to Consumer Staples — a much sought-after defensive sector (see Figure 1). 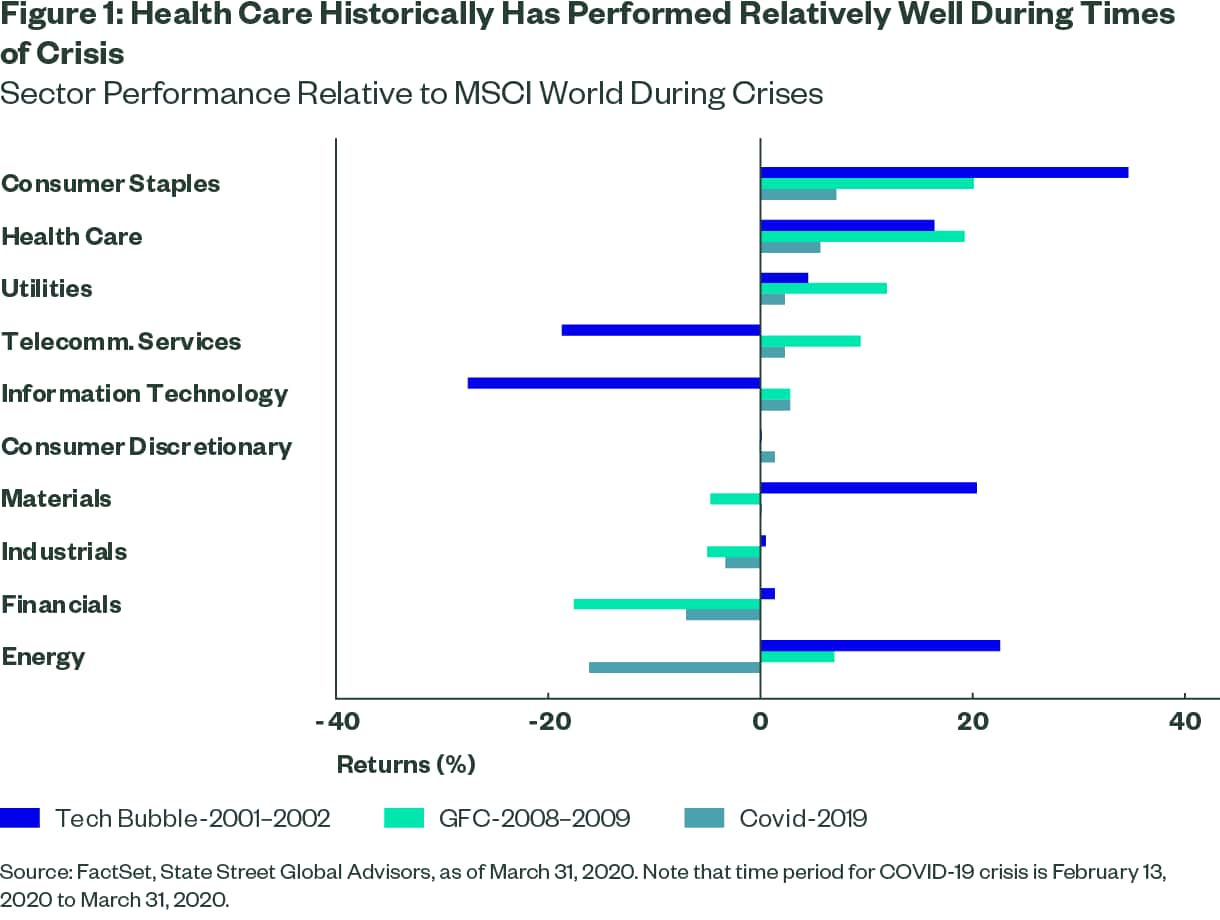 Health Care’s outperformance in past crises was fueled by strong fundamentals — in particular, remarkably resilient earnings. During the Tech Bubble and the GFC, Health Care earnings growth was strong compared to other sectors (see Figure 2). During the Tech Bubble, Health Care earnings growth (21.59%) was second only to the Consumer Staples sector (25.66%). Health Care and Consumer Staples were the two sectors that consistently grew their earnings even as the wider market experienced extreme growth challenges. 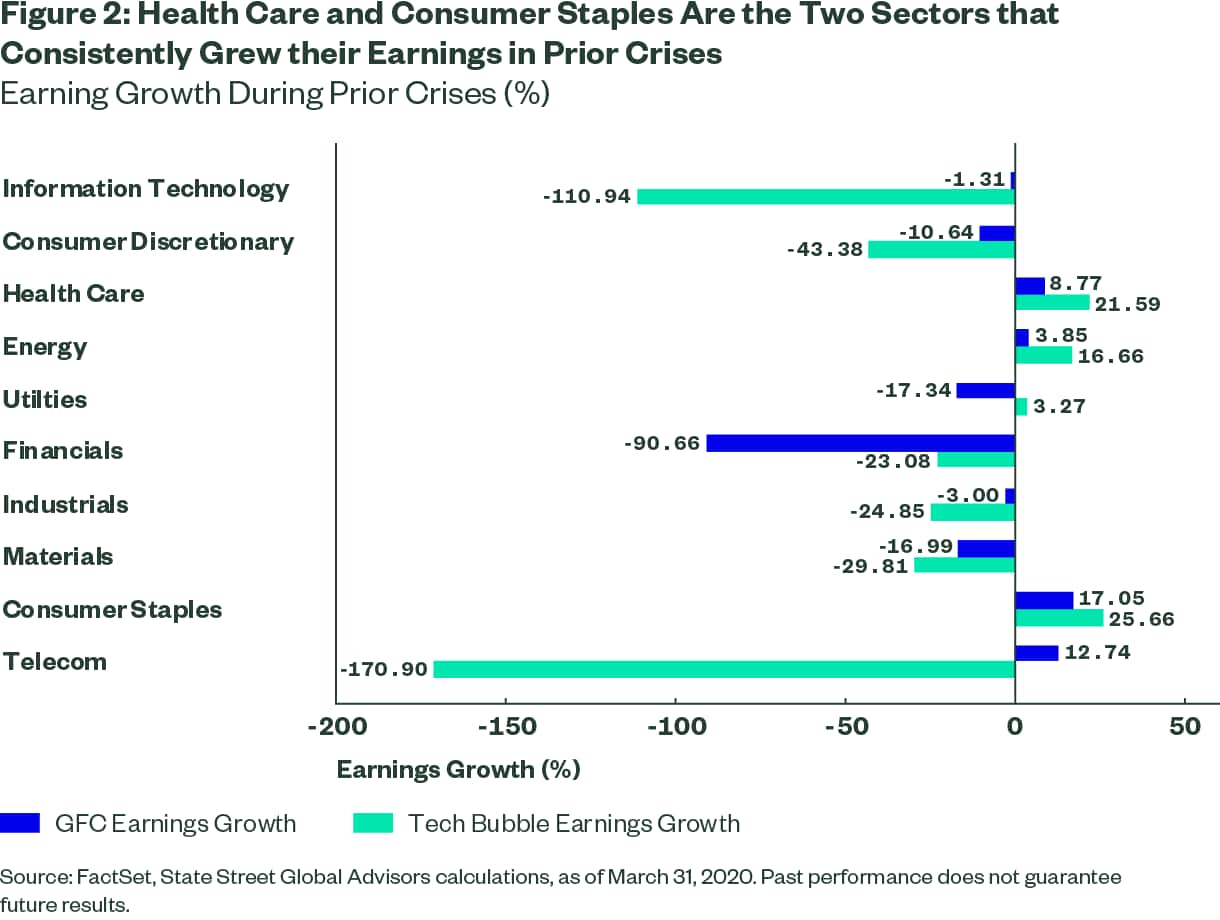 During the current COVID-19 crisis, Health Care’s performance has so far been more muted compared to previous crises; however, Health Care has been one of three sectors to outperform the MSCI World Index and has delivered the second-highest return after Consumer Staples. In addition, the earnings outlook for Health Care is robust, as demonstrated by the recent trajectory of analysts’ earnings expectations on a next-12-month basis (see Figure 3). In this analysis, we extracted the top three sectors with the highest next-12-month, year-on-year growth expectations. Health Care registered the highest expectations (8.7%), followed by Information Technology (7.7%) and Consumer Staples (1.7%). (Earnings expectations for the MSCI World Index as a whole are -3.5%.)

Although the earnings outlook for the Information Technology sector remains strong, during the month of March Health Care became the sector with the best earnings outlook while also trading at a much more reasonable valuation when compared to the IT sector. As analysts cut expectations across a wide spectrum of sectors, Health Care has been the only sector to maintain consistent monthly improvement in its future earnings outlook, year to date.

In addition, recent policy interventions promise to provide further support to the Health Care sector during the course of the crisis. The $2 trillion CARES Act in the United States, for example, contains provisions to help the most stretched part of the health care system — hospitals. Many hospitals have lost significant revenue streams by delaying elective surgeries and other procedures to focus on the coronavirus outbreak. The CARES Act provides a $100B grant to make up for that shortfall as well as help meet current expenditures. The fourth-round US stimulus package, passed in late April, also included funding for hospitals.

Health Care Beyond the Crisis

Beyond the crisis, we see strong prospects for Health Care to outperform the market for three main reasons: existing tailwinds from the COVID-19 pandemic, consumer trends in emerging markets (EM) and prospects for future spending on health care infrastructure globally.

In early 2020, the Health Care sector faced a high degree of uncertainty tied to the US presidential election, the lingering effects of the opioid crisis and drug-pricing practices. As we emerge from the COVID-19 crisis, however, health care will likely find itself in a much more favorable environment. The Democratic Party in the United States is poised to nominate centrist Joe Biden (rather than Social Democrat Bernie Sanders) as its presidential candidate, alleviating some election-related uncertainty. Meanwhile, a newfound appreciation for health care in general may help to create a more favorable legal and regulatory environment for the sector. Although some issues may remain connected to US drug-pricing legislation, we think the crisis may reduce the level of distrust between government and health care executives. In addition, the crisis has revealed large-scale reliance on China as a supplier of medical equipment. Some countries may choose to address this potential vulnerability by building alternative supply-chain networks in the wake of the crisis.

The rise of the emerging markets consumer has been a major contributor to economic activity globally. As average household incomes and urbanization rates continue to climb, more people will have access to health care and the ability to pay medical costs. At the same time, growing wealth and urbanization is ushering in lifestyle issues that are, in turn, fueling non-communicable health problems such as diabetes. To combat this trend, governments in emerging markets are likely to spend more to care for their working-age populations in the near term, and to care for their aging populations in future.

Finally, the COVID-19 crisis brought the lack of health care infrastructure to deal with future pandemics into sharp relief. Figure 4 shows data from the World Health Organization (WHO) on health-related capital expenditures as a percentage of GDP. For high- and middle-income countries, investment in health care infrastructure went down by 7 percentage points and 12 percentage points, respectively, between the years of 2009 and 2017.1 The situation is even more dire in low-income countries, where health-care infrastructure spending has remained flat despite rapid population growth. The COVID-19 crisis is likely to bring attention to these shortfalls and encourage governments to increase their health care spending.

The COVID-19 pandemic is a crisis unlike any we’ve ever faced. As long-term, systematic investors, we believe in investing with a disciplined process over a full market cycle. It is crucial, in our view, to avoid getting caught up in day-to-day market gyrations and volatility spikes.

At the same time, it’s also important to think about how the current crisis may alter the investment landscape. When we review that landscape and consider the dual return and risk mandate of our defensive equity strategies, the Health Care sector stands out. In general, we believe that the Health Care sector represents a favorable investment opportunity for investors seeking relatively strong return potential at a relatively moderate level of risk. By displaying resiliency during the course of the crisis (thus offering a degree of downside protection) and showing strong potential for outperformance in the eventual recovery (thus offering the opportunity for upside capture), Health Care offers an excellent example of the characteristics we seek in our defensive equity portfolios.

For four decades, these principles have helped us be the quiet power in a tumultuous investing world. Helping millions of people secure their financial futures. This takes each of our employees in 27 offices around the world, and a firm-wide conviction that we can always do it better. As a result, we are the world’s third-largest asset manager with US $2.69 trillion* under our care.