This is Part IV of a mini-series that looks at the US Presidential Elections. Parts I, II and III assessed macroeconomic, broad asset class and equity sector implications. This month, we will publish a comprehensive and in-depth report on equity market performances relative to past elections as well as expected moves this cycle.

This is the fourth installment of our mini-series on the US elections. Our first article noted the market risk from a disputed US election; our second article reviewed the domestic policy risks and their implications for asset allocation; and the third identified equity sectors most exposed to a change in government. This article seeks to highlight how changes in US foreign policy could be market relevant for the coming year.

Historically, US foreign policy mattered little to investment decisions. During the Cold War, it was largely confined to decisions to grant improved market access to emerging markets (EM), at the time a very marginal investment niche. In the post-1989 era of hyper-globalization, US foreign policy affected financial markets mainly via geopolitical risks and commodity prices, though even that relevance declined with lower oil intensity among industrialized economies.

This changed after the Global Financial Crisis, which laid bare the hollowing out of the middle class in established democracies, partially as a result of the global trading system. In addition, the internationalization of monetary policy meant central bank decision making processes began to intersect with foreign economic policy, both in formal settings (e.g., G-20) as well as ad hoc. Hence the term ‘currency wars’, which entered the international affairs lexicon in 2010. But it was not until 2016 that global exchange rate policies as well as trade relations became sensitive to the US political cycle, as evidenced by subsequent trade tensions.

For the 2020 election, we see four foreign policy areas relevant to investors, each for different reasons:

First, the obvious: China. The secular trend of decoupling the globe’s two largest economies will continue unabated as US-China relations have bipartisan consensus in viewing it as adversarial. The tone and approach could change, but not the overall direction. While trade was the most glaring dispute at the outset and was then followed by technological dissociation, US-Chinese rivalry will now increasingly affect capital flows.

The reverse is likely to take place as well with soft incentives and hard rules deterring US institutional investors from providing capital to Chinese enterprises. While there are some individual firms that may struggle with these new obstacles, this should not affect the underlying valuations of the US or Chinese equity markets overall. Similarly, Chinese bonds could continue to offer the same relative portfolio appeal for developed market investors, notably low correlation and higher yields.

We believe the primary adjustment would occur via the exchange rate instead of stock or bond valuations. Figure 1 shows the USD/CNY exchange rate as well as the yuan’s real effective exchange rate (REER) since Donald Trump took office in January 2017. It illustrates that the bilateral currency pair can deviate from broader foreign exchange (FX) dynamics as well as experience episodes of sudden repricing.

In our view, the main differentiator of a Biden Administration is that FX volatility would be lower and less politically driven. In this context, the second aspect would be the spillover effect on other EM economies. A depreciating US dollar is supportive as is a stable, if not appreciating yuan. 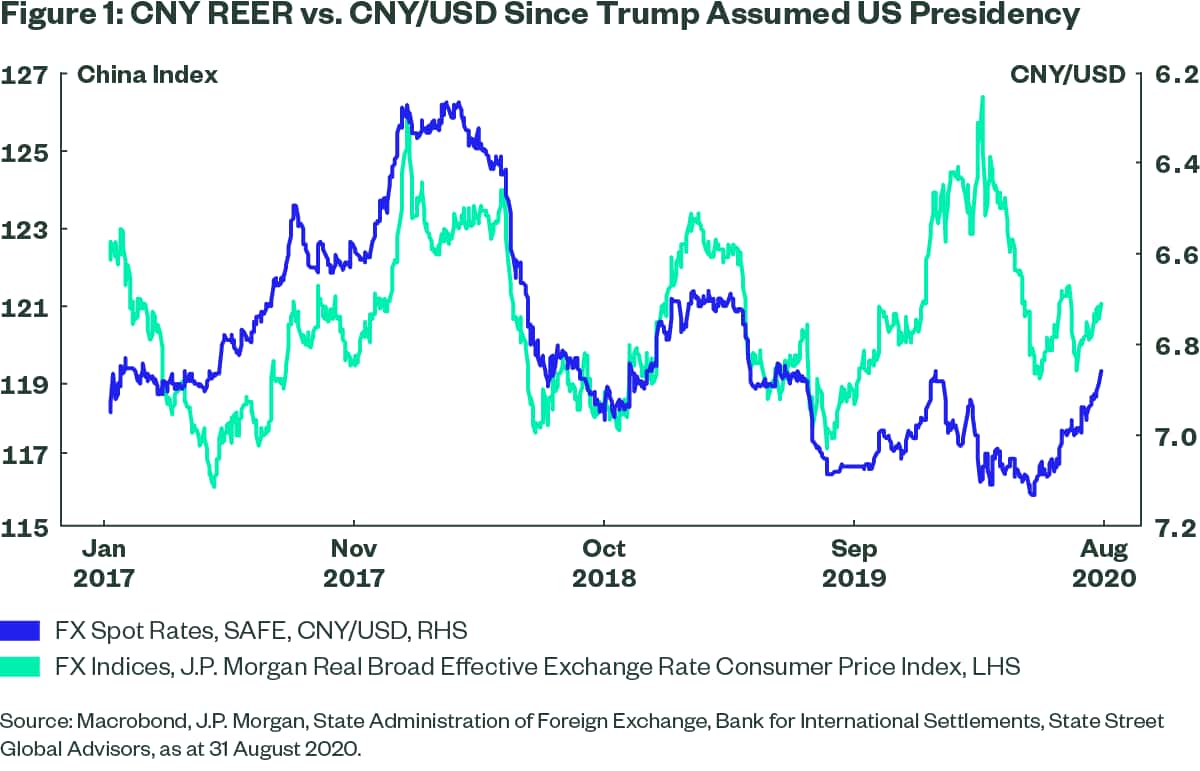 Moreover, less currency volatility is helpful as EM has suffered capital flow volatility on the back of geopolitical tensions. The 2018 Turkish currency crisis is an example of perennial risks of the Trump modus operandi as his ‘transactional’ approach to foreign relations introduces repeated episodic risks.

Instead, Joe Biden is more likely to articulate a predictable strategy around US support for reshoring and longer-term economic relations, which could also help release some capex in favor of a third set of countries that can be assured of preferential trade relations. While all these policy-driven factors are positive, they are probably not enough to offset the otherwise very poor macro conditions in the post-pandemic era.

Thirdly, Mr. Biden was a key architect of Barack Obama’s foreign policy and is therefore likely to restore traditional alliances among friendly Organization for Economic Co-operation and Development (OECD) countries. The strategic priority would be to align wider trade and China policy. A long-awaited European Union-China investment treaty would likely fall by the wayside in such a scenario.

Another side effect of this strategic reset is that an OECD-governed compromise on global taxation may become more probable. This could particularly affect digital taxes and offshore accounting. In conjunction with the desire to raise domestic taxes, it would make smart foreign policy to coordinate with European allies. Of course, this would be bearish for those US equities with high ex-US revenues as nearly 30% of the median S&P 500 revenues are generated abroad (Figure 2). 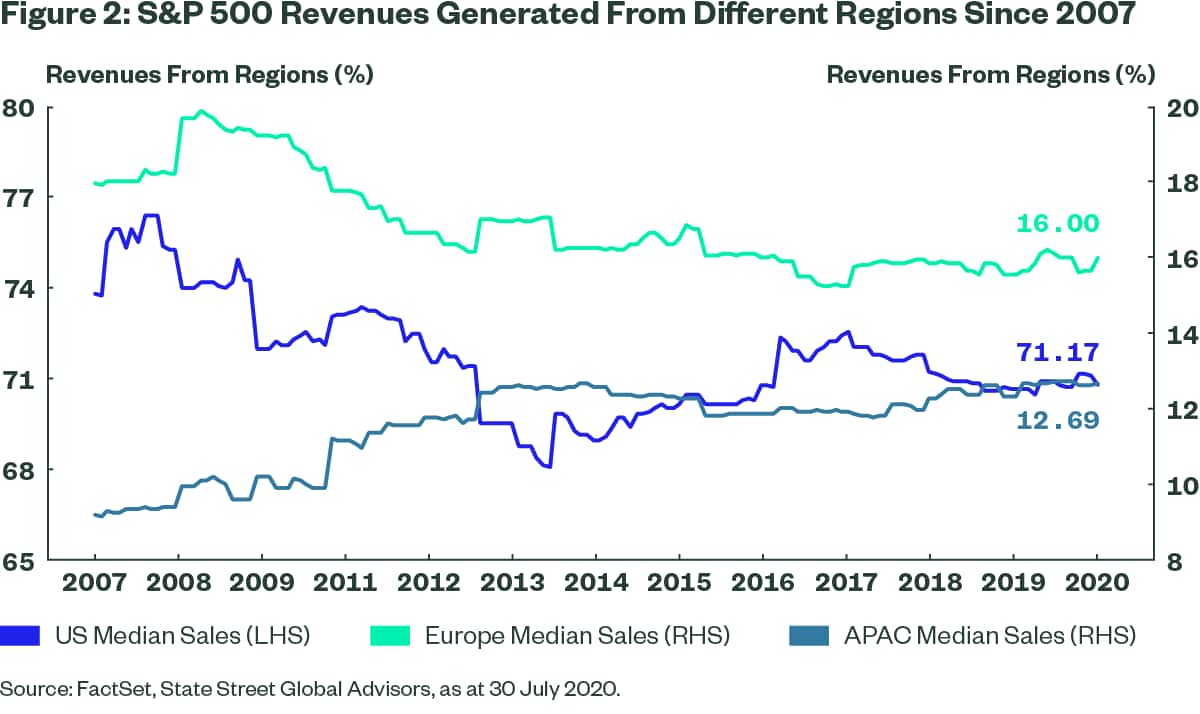 Dovish Posture on Geopolitics of Oil

Fourth, commodities still matter in the 2020s, so the US stance toward major energy producers (e.g., Iran, Venezuela, Libya and Russia) could affect future global supplies. In this regard, we can assume a Biden administration would emulate the dovish nature of the Obama years and would thus be tolerant of higher energy production in adversarial countries.

Yet Mr. Biden’s simultaneous climate-friendly deterrents to be imposed on US hydrocarbon production probably outweigh the foreign policy considerations, so we would nonetheless tilt slightly bullish in favor of oil and gas prices as supply does not recover as strongly as demand.

Once in office, Biden’s Administration is likely to make the policy process more predictable. Consequently, the primary investment implication would ultimately be lower volatility, more in FX than equity markets. Directionally, China should most likely be willing to tolerate currency appreciation and very selectively, other EM assets could be attractive in a depreciating US dollar world. This structural weakening would partially be offset by a renewed safe-haven appeal, so the geopolitics-driven component of the rise in gold prices would likely come to an end.

For US equities and energy prices, it is worth following the ripple effects from a possible foreign policy pivot, but we still believe domestic policy choices will outweigh the impact of those choices.

The views expressed in this material are the views of Elliot Hentov through 04 September 2020 and are subject to change based on market and other conditions. This document contains certain statements that may be deemed forward looking statements. Please note that any such statements are not guarantees of any future performance and actual results or developments may differ materially from those projected.