Economics concerns itself with measuring the production and commercial exchange of goods and services. A commercial exchange involves a price – the clearing mechanism for supply and demand – and price is central to the discipline’s conceptual framework. But what if there are no commercial exchanges and observed prices? This complicates things to the extent that such situations are often intentionally excluded from theoretical economic models. They are “externalized” away in order to simplify the stylized model world and are, in effect, unaccounted for in the model’s conclusions.

Such externalities help explain why macroeconomics has historically been poorly positioned to account for and, by implication, help mitigate one of society’s greatest challenges: climate change. Yet we may be at a point where these glaring limitations are no longer deemed acceptable by society as a whole. This means climate change can no longer be relegated to “specialty” or “satellite” models and must be endogenized into the mainstream macroeconomics framework.

Several official and multilateral institutions are pioneering the way forward, and others from the private sector are joining the effort. For instance, the Organization for Economic Co-operation and Development has produced an alternative estimate of productivity called environmentally adjusted multifactor productivity (EAMFP). While imperfect and not available for all countries, EAMFP marks a significant step toward broader efforts to systematically capture not just how much we produce but also how we produce it.

A seminal 2018 paper on this topic argued that “traditional measures of productivity growth fail to fully account for the role of environmental services in production.”1  Since “pollution is not considered an output of the production process,” only costs associated with mitigating pollution are fully captured and not the positive outcome of reduced pollution. Conversely, while the value of production is accounted for, any associated heightened intensity of natural resource utilization is not.

This asymmetry can skew traditional measures of productivity either toward a lower level than they should be (in the first instance) or toward a higher level (in the second). This would in turn affect our understanding of potential growth, relative economic performance of countries, the appropriate macro policy mix, and ultimately, the risk premia associated with various geographies. An environmental lens of analysis would, for instance, reduce the growth advantage of emerging markets (EM) relative to developed markets and – all else being equal – raise the EM risk premium.

From a microeconomic perspective, such “incomplete accounting” can disincentivize firms from investing in pollution mitigation technologies unless their competitors also are subject to similar requirements. Otherwise, a firm would find itself at a competitive disadvantage due to increased production costs. Consequently, in order to facilitate the achievement of societal goals around climate change, it is imperative that macroeconomic policies – whether around trade, tax or other issues – seek to address such disparities.

European discussions around a carbon border tax, for instance, should be understood within this context, as should the European Central Bank’s recent pledge to more systematically incorporate environmental sustainability in all aspects of monetary policy. The message is clear – the trend toward increased scrutiny, regulatory oversight and active government interference in markets to drive the climate agenda is here to stay. In time, the trend is also likely to broaden, permeating more sectors and facets of economic activity.

Role of the Investment Community

The investment community has a big role to play as the intermediary that helps determine the ultimate cost of capital for individual companies. An environmental overlay can drive upward or downward adjustments to a country’s GDP, and the same overlay should – and we believe it increasingly will – have an impact on the cost of capital for individual market participants. Theoretically at least, a more sustainable business model should imply a more stable revenue flow and should command a lesser risk premium and improved access to capital. This very idea underpins State Street Global Advisors’ R-factor scoring system.

This exercise is broadening beyond climate to other social and governance metrics as well. Environmental Social and Governance (ESG) based investing is not just becoming increasingly popular but has become the necessary new framework for both macroeconomics and investing. What some may still perceive as an optional consideration seems poised to morph into the new requirement of tomorrow. It seems wise to prepare for that change sooner rather than later.

Green Transition and its Implications

The ultimate impact of the broad adoption of ESG investing could simultaneously be both obvious and nuanced. The investment process itself will change to incorporate ESG as a permanent dimension of portfolio management going forward. What this may mean in practice is still an open question at this time. All else being equal, ESG incorporation could turn Europe – with its thought and political leadership on climate change and its relative leadership in decarbonization efforts – into a more attractive investment destination over the medium term. 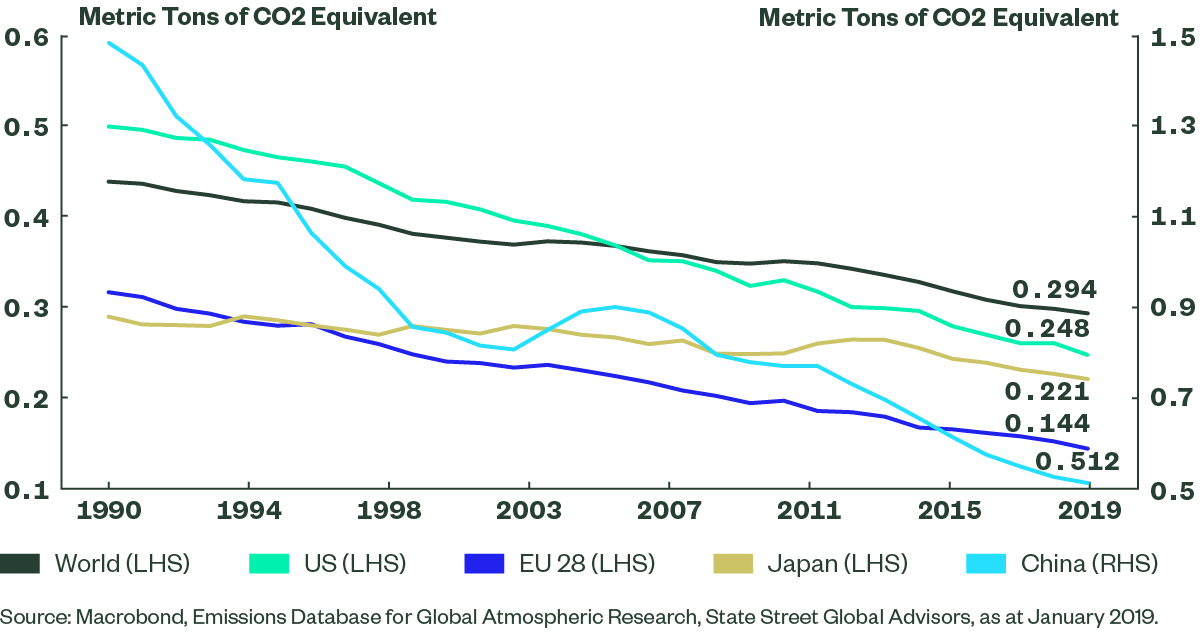 The United States (US) may also be an improbable winner. Despite its fairly dismal environmental reputation and the shale revolution of the past decade, the carbon intensity of the US economy has actually declined at a faster rate than that of the European Union (EU) and at a much faster rate than that of Japan (Figure 1). While the EU retains a clear absolute advantage, the US has managed to narrow the gap with the EU and has nearly closed the gap vis-à-vis Japan. By contrast, imposing more stringent ESG considerations in the investment allocation decision could disadvantage some EM economies, where greening efforts may lag.

The green transition process itself could prove to be inflationary. Admittedly, we have made great strides in lowering the carbon intensity of GDP over the past two decades without triggering higher inflation. However, what is in play today is a much accelerated transition timetable, driven at least as much by government mandate as by natural market forces. This accelerated “greening” of the economy means we are voluntarily making parts of the existing capital stock prematurely obsolete, ushering in a period of “parallel” production processes during which demand for certain inputs may actually increase. Somewhat paradoxically, the resource intensity of production could actually temporarily rise.

The views expressed in this material are the views of the Global Macro and Policy Research team through 11 August 2021 and are subject to change based on market and other conditions. This document contains certain statements that may be deemed forward looking statements. Please note that any such statements are not guarantees of any future performance and actual results or developments may differ materially from those projected.

Responsible-Factor (R Factor) scoring is designed by State Street to reflect certain ESG characteristics and does not represent investment performance. Results generated out of the scoring model is based on sustainability and corporate governance dimensions of a scored entity.