This is Part II of a mini-series that looks at the US Presidential Elections. Part III will consider how investors can position their equity portfolio via sector choices in light of upcoming policy shifts.

Our previous article in this mini-series noted that the greatest electoral risk to financial markets could stem from a disputed US election, which could precipitate a political crisis with severe negative spillovers for the real economy and global asset prices. Odds of a smooth election process increase when one candidate wins decisively. Given Democratic challenger Joe Biden has developed a considerable lead in the polls, the chances of a Democratic sweep (Presidency plus control of both houses in the Congress) have risen with betting markets now favoring this scenario.

Such an outcome would represent a meaningful shift in the investment environment. Conceptually, the Trump administration could be described as having pursued a policy mix that could be equated with ‘broad beta’ support for corporations via lower corporate taxes and regulatory relief. This approach mirrors a wealth transfer from the government balance sheet to corporate balance sheets since the tax cuts widened the budget deficit. Both levers helped expand profit margins and improve earnings. Indeed, operating earnings for S&P 500 companies hit an all time record during the third quarter of 2018. Importantly, while there was some differentiation among corporate beneficiaries, all corporations were net gainers. 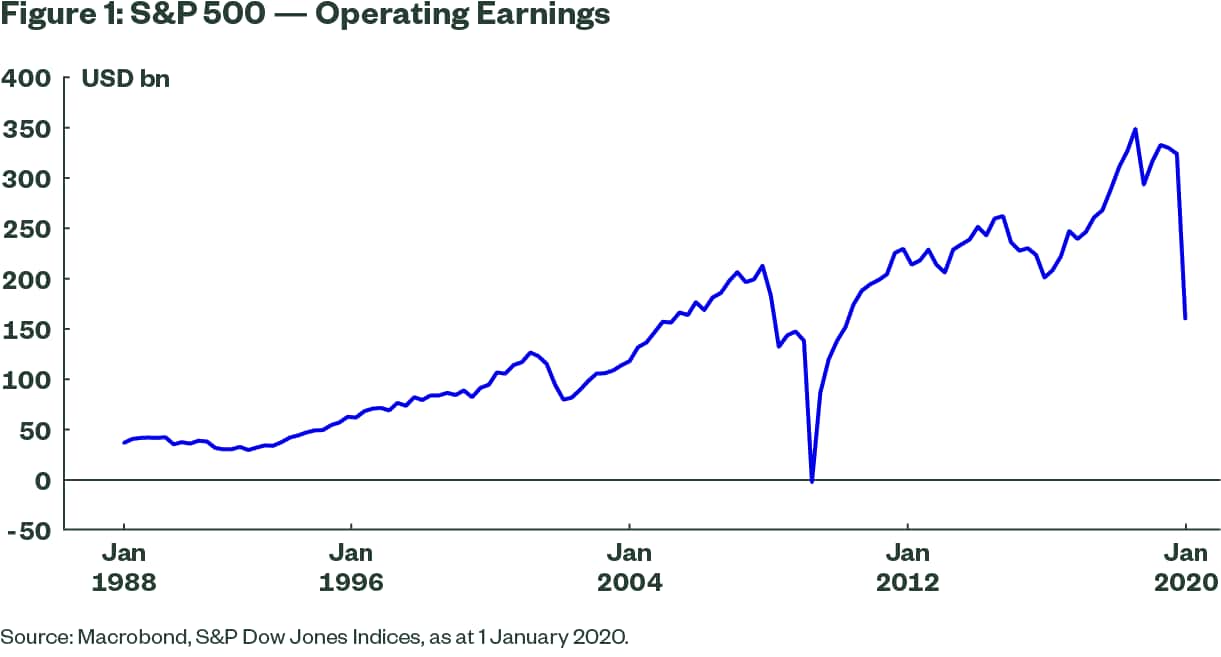 Effects of a Democratic Administration

By contrast, any Democratic administration that enjoys even the slimmest Senate majority (the House being already under Democratic control) is likely to re-direct wealth from corporate balance sheets toward the household sector (via government taxation and spending). There is a growing sense of urgency within the Democratic party to improve worker welfare. Indeed, labor’s share in GDP had been declining throughout the 2000s and while it has risen recently, it remains almost 5 percentage points lower than in 2001. To a large extent, this reflects many structural changes such as offshoring, lower labor force participation rate and reduced unionization rates (Figure 2). Nevertheless, to the extent that economic policies also play a role, a Democratic administration will seek to alter them.

Such Democratic efforts would entail higher taxes (on corporations, high income individuals, and non labor income), increased transfers and higher public spending. The impact on US equities is likely to be negative, especially since the pre-Tax Cuts and Jobs Act (TCJA) loopholes that allowed US firms to avoid paying taxes on foreign earnings have also gone away. In fact, it is important to note that the share of US corporate profits derived from overseas has doubled since 2006. We suspect that the ability to avoid paying taxes on those earnings had much to do with the general uptrend in the share of after-tax corporate profits in GDP (the opposite of the labor share).

An increase in corporate tax rates could sap that funding source while higher capital gains and payroll taxes on high earners could drain capital out of US financial markets. Additional regulatory restrictions on buybacks could magnify the impact.

The coalition of Democratic voters would be heavily represented by constituents on the lower end of the income scale and so the distributive aspects of economic policies will take front seat. Therefore, measures to directly support labor income, such as an increase in the federal minimum wage or facilitating collective bargaining are also likely. Figure 3 illustrates the growing gap in the minimum wage among states that voted for Hillary Clinton in 2016 and the federal minimum wage. The gap is at an all-time high, and thus one could expect a federally mandated minimum wage increase as well as other income supporting policies.

There is also a likelihood of a rollback of regulatory relief from the Trump years. Above all, climate change and public health are likely to generate government intervention that could raise costs for some producers compared to today’s rule book. At the same time, this regulatory pivot could encourage innovation and the faster adoption of environmentally friendly technologies, inviting increased capex in ‘green’ industries similar to the experience in China and Germany. The key takeaway, however, is that the incentives would vary widely across sectors with some poised to benefit far more than others.

In aggregate, a Democratic adminstration is more prone toward running fiscal deficits for the purpose of higher government spending. Depending on the choice of expenditures, such fiscal measures could have a higher fiscal multiplier than the TCJA tax cuts. Notably, the United States remains starkly underfunded in infrastructure and a Biden administration would presumably make an infrastructure bill a top priority in 2021. Front-loading of public investment would mitigate some of the effects of imposing higher taxes later on.

Any incoming Democratic administration will, however, face the economic constraint of the post COVID-19 world. Massive fiscal stimulus and transfers to households and corporations have already been handed out with more likely before the elections (Figure 4). The federal budget deficit is skyrocketing.

So far treasuries remain well bid, partly thanks to unprecedented balance sheet expansion by the US Federal Reserve (Fed) and partly thanks to safe-haven demand amid the COVID-19 crisis. So far inflation remains low and well behaved, helped by lower energy prices and an unprecedented collapse in global demand. And yet, investors are rightly wondering about the extent to which policy stimulus can be scaled up without generating undue inflation over time. Given the persistent undershooting of inflation targets over the past decade, some may view such worries about inflation as unwarranted. We agree that technology can exert an extraordinarily powerful deflationary influence. The Fed seems unconcerned and would most likely welcome even a persistent inflation overshoot in coming years to make up for past misses.

But investors seeking real returns probably cannot afford an equally unconcerned approach. Inflation could force a reassessment not only of the equities-bonds allocation, but to the extent that it manifests through and is exacerbated by a weaker dollar, it would also have implications for regional allocations. Remote as it may seem today, higher inflation seems more conceivable in a Biden presidency than during a second Trump term.

In sum, the Democratic policy mix could be construed as an ‘alpha regime’ as opposed to the ‘beta regime’ that prevailed under President Donald Trump. The market would evolve more toward producing a much more diverse set of losers and winners where stock, industry and sector selection becomes more important. Broad large-cap indices are unlikely to be as rewarding as in recent years and equity selection via sectors, industries or individual securities could be more adaptable.

Depending on the sequencing of distributional versus growth-enhancing policies, inflation concerns could arise, leading to an appeal of having an allocation to a mixed set of real assets such as commodities, Real Estate Investment Trusts and Treasury Inflation-Protected Securities.

The views expressed in this material are the views of the Global Macro Policy Research through 13 July 2020 and are subject to change based on market and other conditions. This document contains certain statements that may be deemed forward looking statements. Please note that any such statements are not guarantees of any future performance and actual results or developments may differ materially from those projected.