Saudi Arabia’s decision to launch an oil price challenge against Russia sent markets into panic mode, adding further uncertainty to a world already in the throes of the Covid-19 epidemic. We aim to highlight some of the key implications of this predicament.

Saudi Arabia’s decision to launch an oil price challenge against Russia sent markets into panic mode. This adds a third layer of uncertainty on top of the existing two – Covid-19 viral trajectory and future policy responses – in all affected economies. Worse, for investors there are fewer data points and less public information from which to forecast Saudi Arabian (or Russian) oil policy. This note aims to highlight some of the key implications of these issues:

1. The Saudi action does not merely imply ramping up of production, with an estimated spare capacity of just under two million barrels per day (mbd). Saudi Aramco also announced total supply targets, which include emptying some of its global inventories. Other Gulf countries are expected to use their spare capacity as well, so together with Russia’s marginal increase, the world could be faced with over 3mbd of extra supply starting April. This should put continued downward pressure on oil prices, particularly as many key economies will be experiencing peak Covid-19 demand damage at the same time. 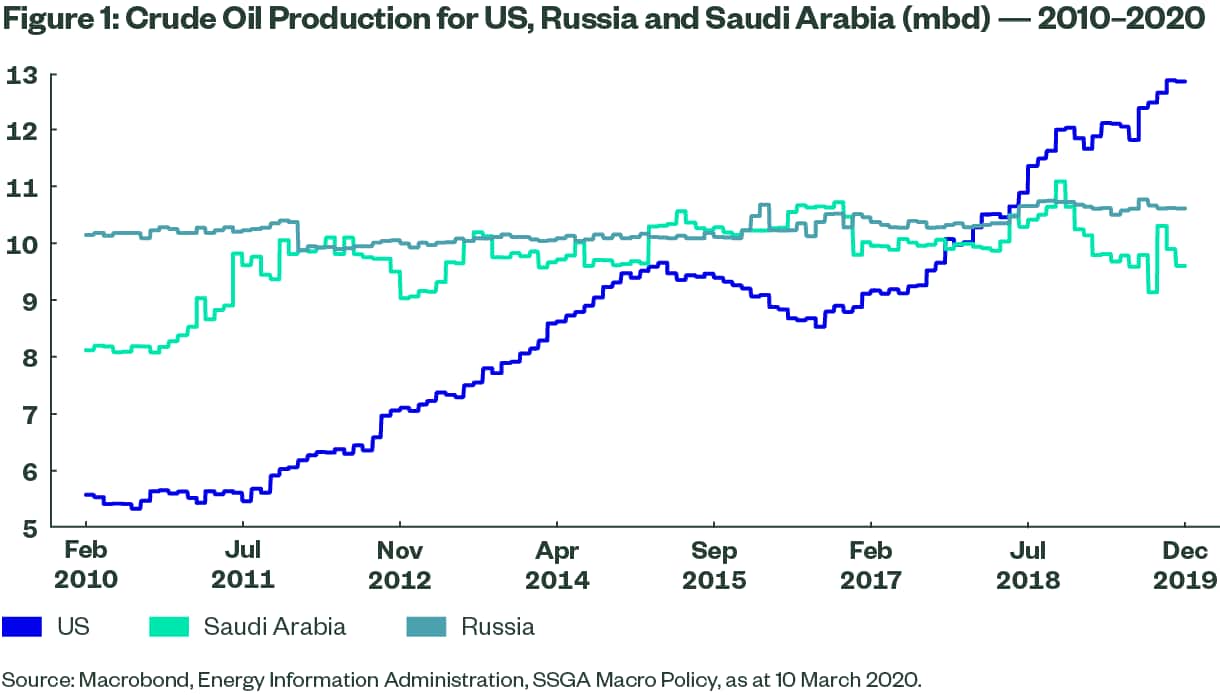 2. Figure 1 illustrates that future Saudi output will likely rise above 12mbd, making it the world’s second largest oil producer for the first time since the tentative OPEC+ arrangements of late 2016. The Saudi objective here is primarily to induce the Russians to return to the negotiating table and revive OPEC+ in earnest. This is a major gamble, given that Russia’s fiscal position (comparatively lower fiscal break-even price – required to meet an oil-dependent country’s spending needs – and a floating exchange rate that cushion the oil price decline) is in better shape than Saudi Arabia’s. Nonetheless, both oil producers share an interest in limiting the extent of such a price war, particularly as the Russians cannot offset the lower oil price with greater market share.

3. Could these events also be an intentional challenge to US shale? Unlikely, at least from Saudi Arabia’s perspective given the experience of 2014-2016, when oil prices had similarly collapsed. Not only markets but also astute oil observers were caught off guard by the fallout. It stands to reason that Russia presumed it could carry on the trend of the past few years (Figure 1) in which nearly all production cuts were absorbed by Saudi Arabia. Riyadh now has put Moscow on the spot, though Russia clearly hopes to affect US producers, too. The oil price drop is paired with an extreme reversal of financial conditions. In our view, US production may fall over the coming months, pressuring leveraged shale producers, but in the medium term it should revert to trend. We point toward oil prices required for shale profitability, which tend to be lower than the fiscal break-even oil price of either Russia or Saudi Arabia (roughly US$42 and US$75, respectively).

4. The larger US challenge is how to weather the oil industry downturn this year. Figure 2 shows how closely correlated US manufacturing industry optimism is to oil prices. Manufacturing was barely exiting the 2019 trade war when Covid-19 struck. The loss of oil industry demand will bring additional pain to US manufacturers. Given that they are disproportionately located in US swing states, the political effect will be magnified. In our view, US President Donald Trump will be very eager to offset that dynamic and may therefore consider more experimental policy actions. 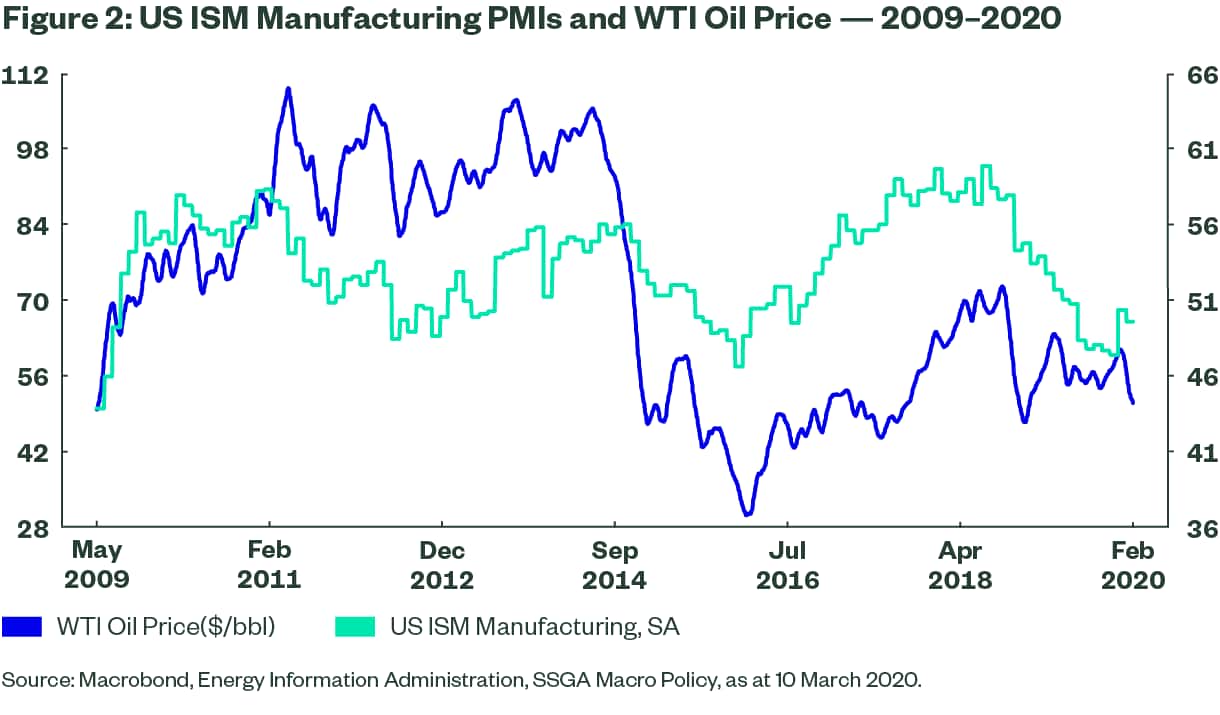 In addition to uncertainty around the virus epidemic and ongoing policy responses, markets may now need to cope with political risks, too. This could contribute to high volatility across asset classes until the epidemic’s peak is forecastable for market participants. In addition, there is considerable potential for market rallies on the back of policy surprises as governments react to worsening economic conditions. Specific to oil, a Saudi-Russian rapprochement remains the likeliest outcome, though that could take a few months. Also, we do not expect a symmetrical oil price recovery but only a partial improvement in the face of incremental return of global demand.

Investing involves risk including the risk of loss of principal. The views expressed in this material are subject to change based on market and other conditions. This document contains certain statements that may be deemed forward-looking statements.

This information should not be considered a recommendation to invest in a particular sector or to buy or sell any assets shown. It is not known whether the sectors or assets shown will be profitable in the future. The holdings are taken from the accounting records of SSGA which may differ from the official books and records of the custodian.

EMEA: The information provided does not constitute investment advice as such term is defined under the Markets in Financial Instruments Directive (2014/65/EU) and it should not be relied on as such. It should not be considered a solicitation to buy or an offer to sell any investment. It does not take into account any investor's or potential investor’s particular investment objectives, strategies, tax status, risk appetite or investment horizon. If you require investment advice you should consult your tax and financial or other professional advisor.