The Future of Ecommerce in China and Latin America

Ecommerce companies have been among the equity market bright spots in global markets 2020, as traditional business models have been upended by COVID-19. But ecommerce has been on a winning streak versus bricks and mortar retailers for years. The ecommerce category is increasingly broad, with many different business models and country variations (see Figure 1). This article introduces the key ecommerce players and profiles the competitive environments in two critical emerging markets, China and Latin America. 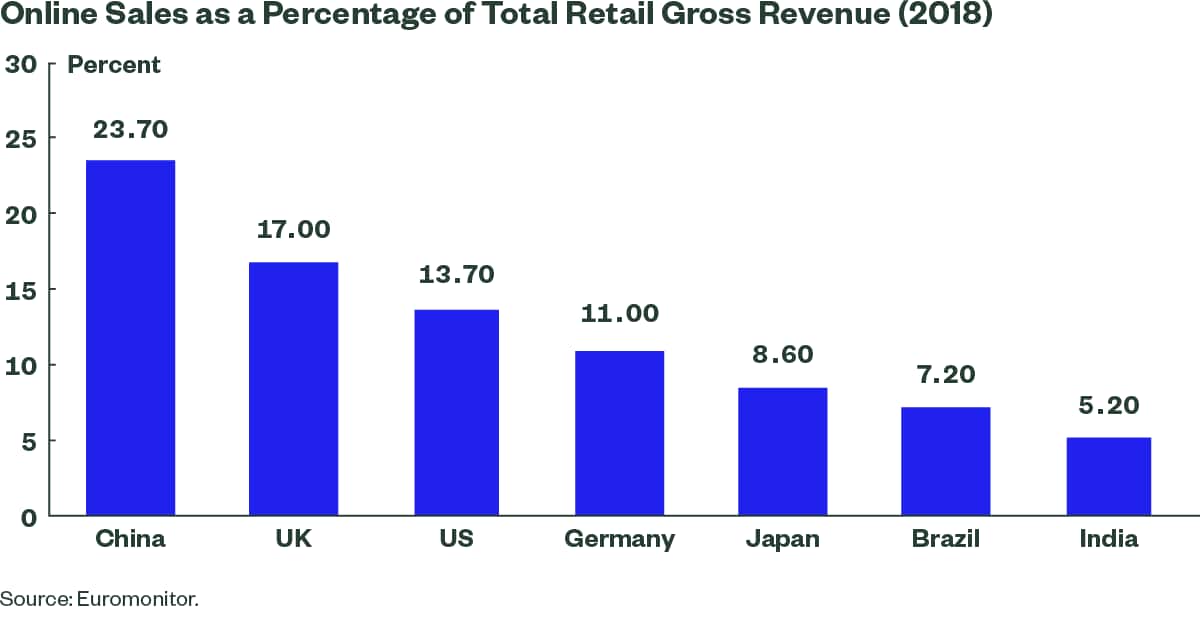 In China, ecommerce extended its share of the retail market to 30% in April, which of course comes with a caveat because ecommerce sales were partly driven by the COVID-19 crisis. Pre-COVID it was closer to 25%, which is still an impressive figure compared to most of the rest of the world. Still, the COVID spike could prove to be a catalyst for a broad-based acceleration in ecommerce trends.

In terms of the factors driving this growth, the Chinese economy has been doing well; GDP and GDP per capita have been consistently growing, driving personal incomes higher. Also Chinese cities are densely populated, making ecommerce more efficient. Chinese consumers have also embraced the convenience of deliveries to their doorsteps. This has been enabled by high smartphone penetration, which stands at 52%. That means there are 700 million potential customers, without even considering the use of laptops or desktops.

But the growth of ecommerce is not just about demand; it is also about supply. Offline merchants can pay 10–15% of sales in offline rent. Moving to an ecommerce model, a merchant can pay around 4% to Alibaba, increasing their profitability and finding a customer base for a wider range of products.

There are three key players in China’s ecommerce scene — JD.com, Alibaba, and PDD. JD’s competitive advantage is in logistics and warehousing, and it has its own last-mile delivery. It’s an asset-heavy model requiring significant investment, but the company is now at the inflection point where economies of scale come through and start to deliver positive operating leverage. This is mainly a first-party model, with a business model similar to how Amazon started. JD now covers 95% of China with 24-hour delivery and is widely viewed as the highest quality in terms of service and products.

Alibaba has a third-party business model, but is building a first-party one as well — its third-party marketplace is much larger, with a user base of 720 million people. So, half of China uses Alibaba, incentivizing merchants to get on the platform. This ensures that Alibaba has a complete range of products, and it encourages merchants by providing services to make doing business online easier. For example, they have the well-known Alipay payment system, a logistics service, and provide financing to merchants and big data targeted advertising. They also have a cloud offering, in which they are heavily investing. This all makes doing business easier for their merchants, which in turn drives greater monetization to Alibaba. The company is also going after merchants’ advertising budgets, offering use of Alibaba’s recommendation feeds and live-streaming platforms.

Amazon has been in China for a long time, having started out with the Joyo.com brand. Since rebranded as Amazon, they still do not have a big operation in China. One problem was an inability to source products from local suppliers and merchants, limiting their selection. Their market timing was also a bit off — having spent heavily on subsidies and discounts in the early days, they then pulled back just as the ecommerce market was taking off. At this stage, we think it would be very difficult for Amazon to come back in China given Alibaba’s and JD’s scale and penetration. They would need to invest heavily in merchant and customer subsidies, which shareholders might not necessarily look favorably on.

Ecommerce will likely continue to gain share in China. But we think that there’s still a place for bricks and mortar. For example, luxury goods customers still want the in-store experience. Also, many offline merchants are starting to embrace digitalization — this has been facilitated by Alibaba, JD, and Meituan, which recognizes that there’s still a role for offline retail. Meituan’s “new retail” strategy aims to help merchants to digitize their businesses, for example, with payment and delivery services. Merchants will sell more online, but can offer offline collection, or retain a showroom but complete the sale online. Alibaba has demonstrated this concept itself, buying bricks and mortar operations and transforming complex operations with online services. The lines are blurring between online and offline, and all Chinese retailers, to improve efficiency and profitability, will need to embrace digitalization.

We believe that ecommerce is in the early stages of secular growth in Latin America. Ecommerce sales started to accelerate in 2017, when broadband access, mainly through 4G technology, reached around 60% to 70% of mobile users in the region. At this point, the ecommerce players began increasing investments in the ecommerce ecosystem, improving their logistics networks and offerings more fintech products.

In Brazil, we expect ecommerce to reach approximately 9% of the retail market by the end of 2020, which is still 7 to 10 years behind the US and China. Other countries in Latin America, such as Mexico, Chile, Argentina, and Colombia, are further behind, with online penetration below 5%, even though internet penetration in those countries is quite high.

Notwithstanding the country comparisons, the ecommerce sector has been doing quite well in the last three years in the region. And given that it is still in the early stages of growth, this presents investment opportunity.

We look for three sources of durable competitive advantage. First, a logistics network. Controlling logistics is crucial for success, to ensure a fast delivery time, while controlling shipping costs and improving customer service. For example, having previously relied on third-party delivery, Mercado Libre has built up its logistics network in the last two years so that 40–45% of its shipping now goes through its own network. Magazine Luiza has a very strong distribution system, using its physical stores and a network of 200 independent transportation companies to distribute products.

Second is product range, which is important to drive customer loyalty. Mercado Libre is the leader here as it has become the “everything store” in Latin America. Magazine Luiza acquired the sports apparel company Netshoes in 2018 and continues to expand its product offering to new categories.

Third is inventory control. A hybrid model, with both first-party direct sales and a third-party platform is more favorable — the platform provides the widest variety of products without requiring additional working capital, while direct involvement maintains the key categories with higher turnover. The combination generates higher traffic and price leadership. Mercado Libre has most of its inventory in third-party platforms (around 90%), but more recently it has started to build directly held inventory. Meanwhile, Magazine Luiza launched a third-party marketplace in 2017, which now represents 30% of its total ecommerce volume.

Amazon has been in Brazil for several years, increasing its offerings and launching its Prime service in the past two years. However, it remains behind the major players and has limited presence in the other Latin America markets. To get a sense of the challenge, Amazon has 600,000 product SKUs in Brazil versus 224 million for Mercado Libre, 12 million for Magazine Luiza, and 20 million for B2W. Also, the local players have invested more than Amazon in delivery. Amazon is also up against Brazil’s highly regulated labor laws and a complex tax system that creates a barrier to entry for foreign companies. There are benefits of scale in retail and ecommerce, but local market presence and focus, being nimble, and being the homegrown champion mean a lot as well.

Given the low ecommerce penetration to date, the window is still open for the international players to create scale. But this window is closing quickly as the market, especially after COVID-19, is accelerating. If these companies don’t make a bigger commitment to Latin America in the near term, then I believe it becomes much more difficult for them to be successful there other than by acquisition.

Ecommerce players will continue to gain share with higher margins and returns, and while bricks and mortar will probably consolidate as some costs rise, sales growth moderates, and returns shrink. COVID-19 has accelerated these trends in Latin America, with management teams already revising budgets and investment plans for 2021.

The ecommerce industry is undergoing a substantial shift, speeding the migration of new customers and new categories to online retail. New verticals of essential products in home and personal care, groceries, and fast-moving consumer goods are moving online. Given the widespread adoption of online shopping during COVID, ecommerce is likely to retain part of the “new demand” when physical stores reopen.

Prior to the pandemic, many Latin Americans were reluctant to put bank information on the internet, did not like to wait for delivery, and were concerned with product quality. But ecommerce players have worked hard to improve the ecosystem, product assortment, and customer experience. As a result, as new customers were forced to shop online because of COVID-19, they found a much-improved shopping experience.

This information should not be considered a recommendation to invest in a particular security or to buy or sell any security shown. It is not known whether the securities shown will be profitable in the future.

The views expressed are the views of Fundamental Growth and Core Equity through September 2, 2020 and are subject to change based on market and other conditions. This document contains certain statements that may be deemed forward-looking statements. Please note that any such statements are not guarantees of any future performance and actual results or developments may differ materially from those projected.

Investing involves risk including the risk of loss of principal. Quantitative investing assumes that future performance of a security relative to other securities may be predicted based on historical economic and financial factors, however, any errors in a model used might not be detected until the fund has sustained a loss or reduced performance related to such errors.