Stock Buybacks Through the Lens of the COVID-19 Crisis

In the years following the Global Financial Crisis, companies in developed markets (DM) have returned record amounts of cash to shareholders in the form of stock buybacks and dividend payouts. Equity investors have benefited greatly from this trend. As economic activity grinds to a halt amid the COVID-19 pandemic, the time seems right to assess which industry sectors benefited the most from share repurchases, which sectors are now most vulnerable as a result — and which are the best positioned, in terms of available cash, for a future recovery.

In recent years, buybacks have consumed around one-quarter of DM companies’ operating cash flows across sectors.1 Cheap credit in the aftermath of the GFC has also fueled the buyback trend, as some companies borrowed to fund buyback activity (see Figure 1). 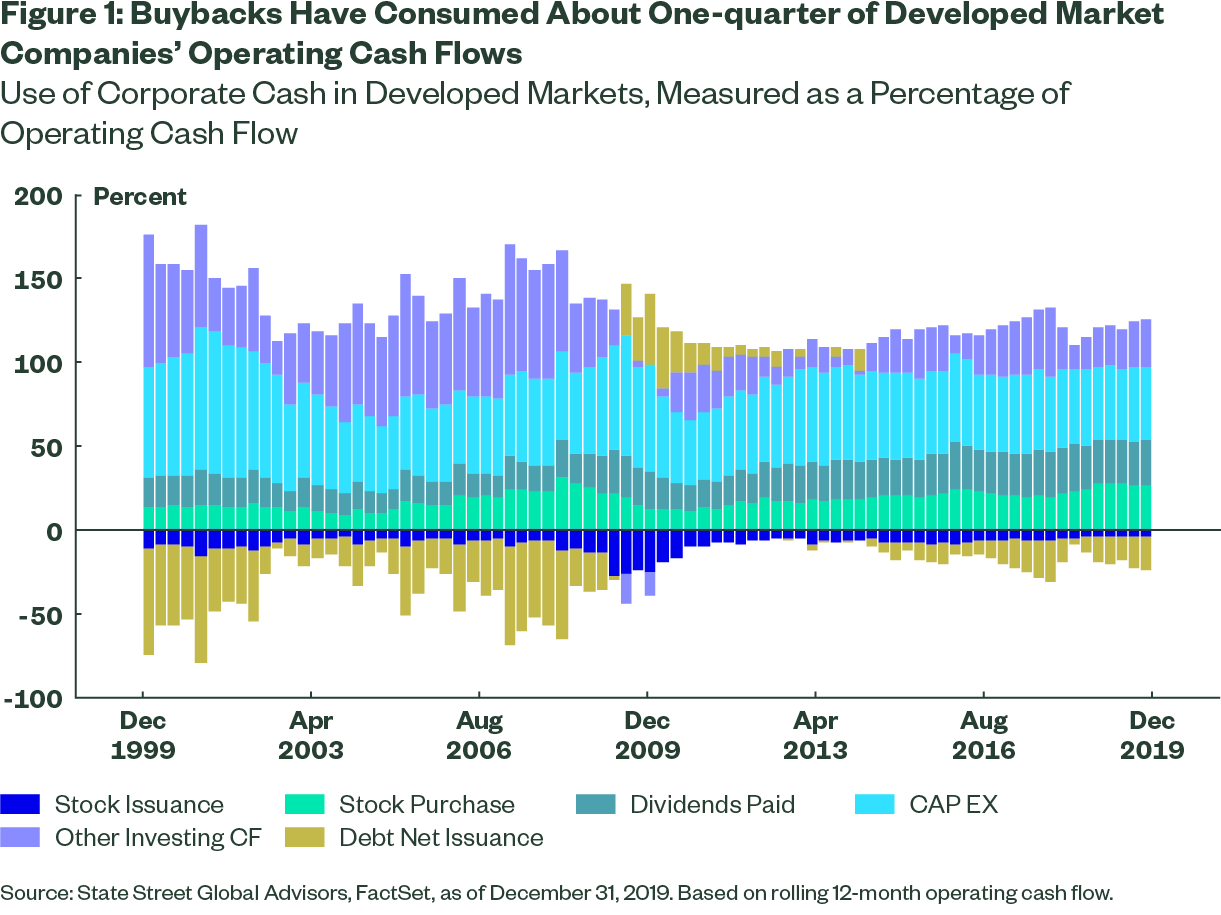 Record-setting buyback levels have ignited a public debate over the use of stimulus funds, as buybacks have benefited shareholders arguably to the detriment of balance-sheet security, future growth prospects (due to under-investment in capital projects, research and development and acquisitions), and workers.2 In the middle of this debate, one fact is clear: Buybacks have been highly rewarding to shareholders. A reduction in buyback activity could dampen a major contributor to equity-market performance.

When viewed in context with other drivers of US equity returns, including momentum, buybacks have made one of the highest contributions to returns over the past seven- and 15-year time horizons (see Figure 2). 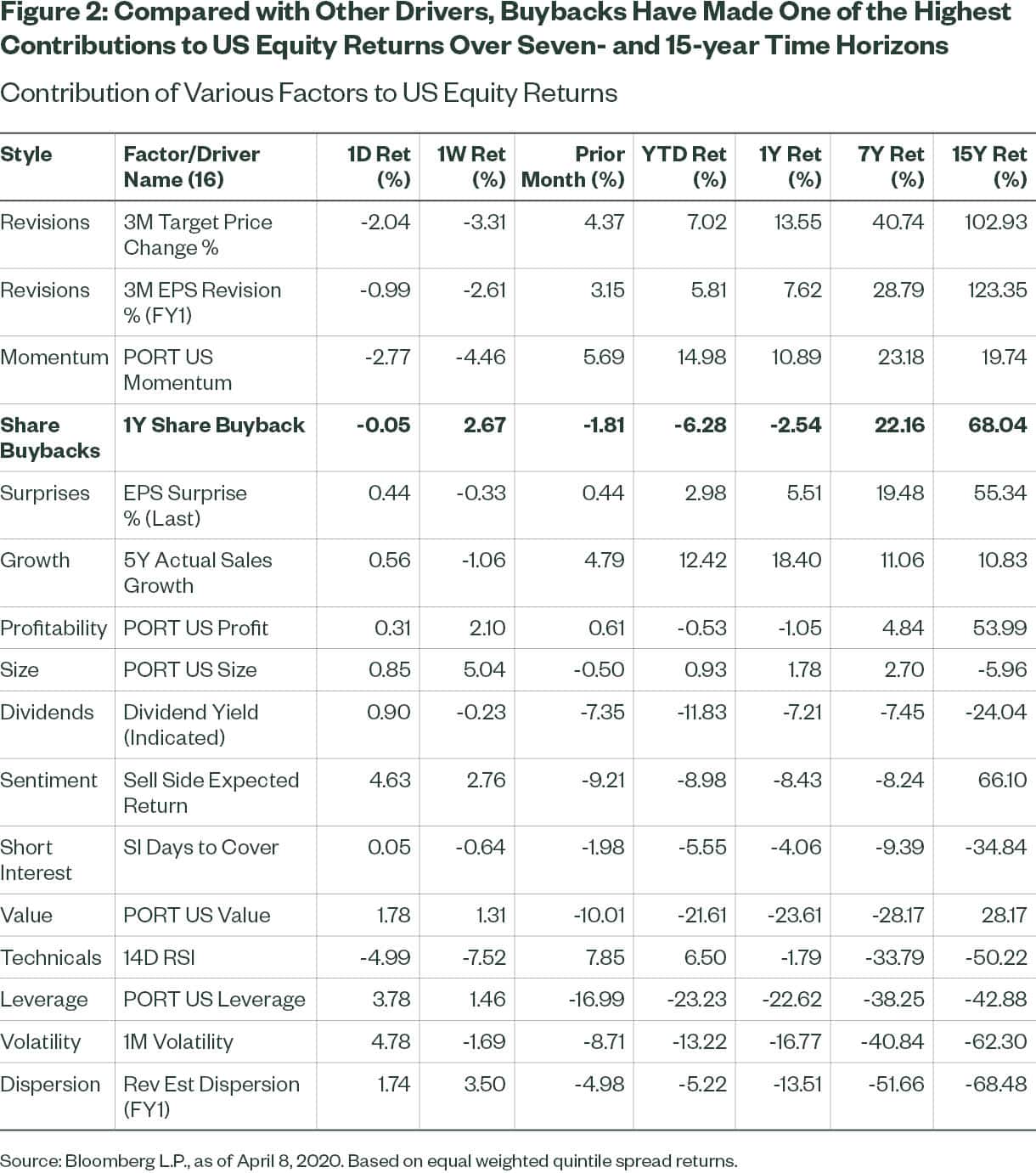 That phenomenon is not limited to US markets (although buyback activity has been especially strong in the United States). Buybacks have provided significant support to equity markets worldwide, making up approximately 25% of the cumulative returns for the MSCI World index in recent years (see Figure 3).3

One of the primary mechanisms of buybacks’ contribution to returns is their effect on earnings multiples. While some companies have certainly used buybacks to return capital to shareholders, buybacks have also acted to boost growth in earnings-per-share (EPS), even as growth in net earnings lagged (see Figure 4).

In general, falling revenues caused by the current crisis should enhance most firms’ motivation to retain cash — first to secure the balance sheet and ensure company stability, and then to fund projects that are likely to emerge as the global economy begins to recover. Extremely low interest rates and cheap credit resulting from current monetary policy interventions could tempt some into attempting to pump up their multiples by borrowing to fund buybacks; however, the surge in buyback behavior that followed the Global Financial Crisis is likely to sharpen scrutiny on the use
of borrowed funds during the course of this crisis.4

Although we don’t expect to see a uniform reduction in buyback activity across sectors, any significant reduction in buyback activity could have substantial consequences for investors and for the broader economy. As share repurchases ramped up in recent years, so did the markets’ reliance on robust buyback programs as a driver of performance. Removing even part of that support could create a headwind to the eventual recovery.

Last year, the Information Technology, Energy and Financial sectors were the most active in terms of buybacks in the US (see Figure 5).5 Of these, neither the Energy nor the Financial sector generated enough free cash flow6 in 2019 to be able to fully fund their buyback programs without drawing on debt (see Figure 6).7 The situation in the IT sector is somewhat different. IT firms generated substantial free cash flow last year, but engaged in some borrowing to fund buybacks simply for reasons of capital exigency — for example, it was in some cases more efficient for IT firms to borrow at very low rates than to repatriate cash to fund buybacks.

Even as many firms retain more cash to cushion against the risk of future cash flow shocks, we do not expect buyback activity to stop completely. Among the top three sectors for buybacks in 2019, we believe buybacks in the IT sector are most likely to continue, if at a reduced level. The IT sector boasts the highest levels of free cash flow, those cash flows tend to be predictable and IT firms currently hold relatively large cash balances.

The outlook for continued buybacks in the Financial sector is uncertain at best. Large US banks bought a very large number of shares in 2019, for two main reasons: Most large banks were at or above their required capital levels, and their credit losses were low. COVID-19’s economic impact
could change this picture completely. Strong and well-capitalized banks also recognize their role in supporting economic activity through the crisis. In March, for example, eight major US banks, including State Street, announced a pause in buybacks through July, stating that they planned to use the cash to support the economy through lending and other services.8

Of the sectors with the most active buyback programs last year, the Energy sector’s prospects for share repurchases are now most at risk. Energy firms on average have generated relatively small cash flows, instead funding their buybacks using debt proceeds. As their cash flows are jeopardized by the price war between Saudi Arabia and Russia and a decrease in demand, energy companies are likely to conserve available cash to shore up their balance sheets. Other US sectors are very likely to tighten their buyback belts, including airlines, which have already signaled their willingness to accept a temporary ban on buyback activity in exchange for bailout relief. Airlines had about a 2% buyback yield last year.9

As the global economy eventually begins to emerge from the COVID-19 crisis, we believe that companies with predictable and stable cash flows will continue to use buybacks as an efficient mechanism to return capital to shareholders. But we also believe that this crisis has the potential to transform companies and their stakeholders in ways that could change the calculus that companies have used to determine the best uses of their cash. Viewed through the traditional lens of capital allocation, many firms may be motivated to direct cash to projects that will help to shore up vulnerabilities revealed in the current crisis. Examples of such projects, which of course will vary by industry and, indeed, by individual company, could include supply chain re-engineering, technology upgrades and automation and reorganizing the workplace, among many others.

At an even deeper level, however, we think this crisis has the potential to increase the scope of factors and the length of the shareholder-return horizon that companies consider when evaluating buybacks and other potential uses of cash. Rather than limiting their thinking to capital allocation in a traditional sense, managers and boards may find themselves under pressure — from internal and external stakeholders, regulators, shareholders and their own views — to include broader social considerations, including employee layoffs, into their decision making when proposing and authorizing buyback plans.10 The trend of incorporating social considerations into capital decision making has been in motion for some time, but we believe it will intensify in light of this crisis.

Until the full impact of the COVID-19 pandemic on the economy is known, we expect companies with strong market positions to continue buying back their shares, but at a reduced scale. This reduction in buyback activity could have substantial consequences for equity investors and for the economy as a whole, as a major pillar of market performance is withdrawn.

In the aftermath of the crisis, we believe that a wide range of capital projects aimed at addressing newly revealed vulnerabilities will compete with buybacks for available cash — and that the crisis will accelerate the incorporation of social considerations, including the effect on employees, in
buyback decision making. For investors seeking the strongest opportunities during this crisis, our view is that high-quality companies — those with proven management talent and resilient business models — are most likely to outperform in times of market uncertainty. Perhaps now more than ever, balance sheet quality and the strength of underlying business models — not the multiples most likely to be influenced by buyback activity — will be investors’ most reliable guides to future performance.

For four decades, these principles have helped us be the quiet power in a tumultuous investing world. Helping millions of people secure their financial futures. This takes each of our employees in 27 offices around the world, and a firm-wide conviction that we can always do it better. As a result, we are the world’s third-largest asset manager with US $3.12 trillion* under our care.