With eurozone and UK inflation crossing above 4.0%, the intense debate over the transitory (or otherwise) nature of the 2021 inflation spike - previously centered almost exclusively on the US experience - has recently crossed the Atlantic. Is this a mere base-effect, flash-in-the-pan, phenomenon, or is there something more meaningful at play?

At a minimum, we believe that the powerful deflationary forces that had permeated the European - and especially the eurozone - economies throughout the post Global Financial Crisis (GFC) period are heavily diminished now. In their place, much healthier household balance sheets and a more counter-cyclical macro policy mix provide two foundational elements for what could be a more inflationary macro backdrop for the decade ahead.

This is independent of and in addition to the powerful cyclical forces of excess savings, post COVID-19 demand normalization, intense supply chain pressures and surging energy prices that threaten to continue to deliver upside inflation surprises across Europe in 2022 (Figure 1). 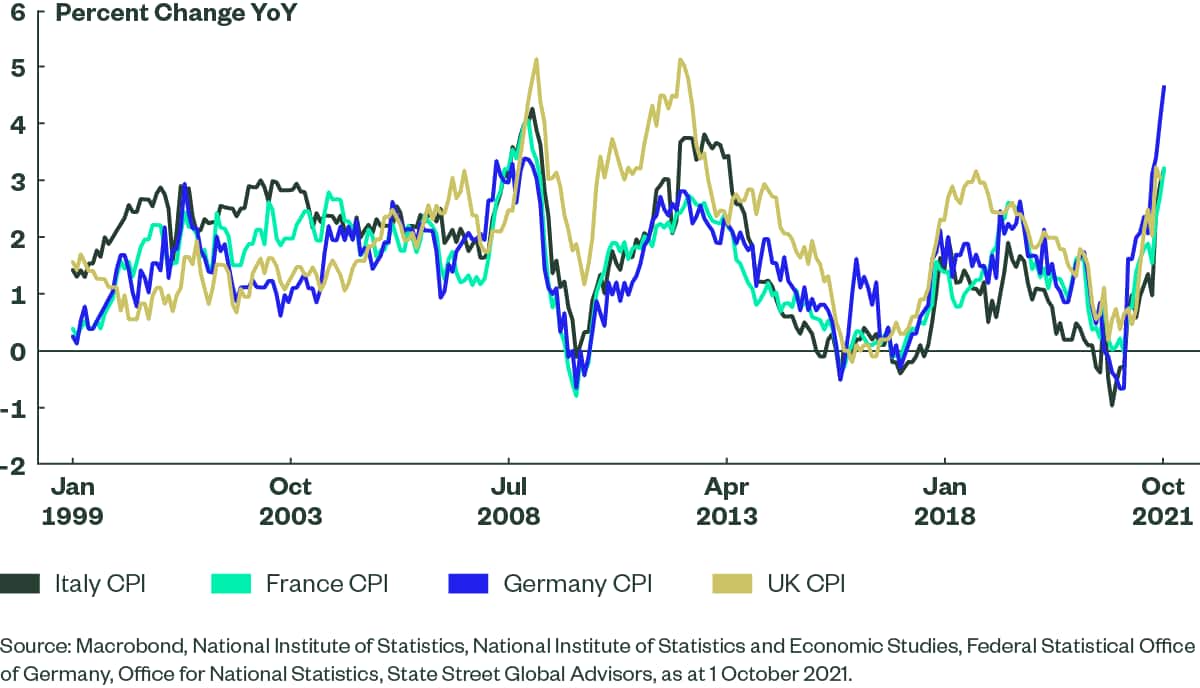 Let us begin by discussing the cyclical forces at play. There is one peculiar way in which cyclical inflationary influences are attenuated in Europe relative to the United States (US) and two others in which they are exacerbated. Partly because US consumer prices are less subject to administrative intervention, demand/supply shocks tend to have a more immediate and powerful impact on the US than on European inflation.

This divergence was starker than usual during COVID-19 as European price statistics relied more heavily on estimated (versus actual) prices during the height of the crisis. For example, whereas US prices for airfares, hotels, vacation packages and other similar services experienced dramatic collapses during the early months of 2020, they exhibited far milder declines in the eurozone (Figure 2). Irrespective of these reasons, this would argue for milder base effects in European inflation in 2021, making the current surge in European inflation even more remarkable. 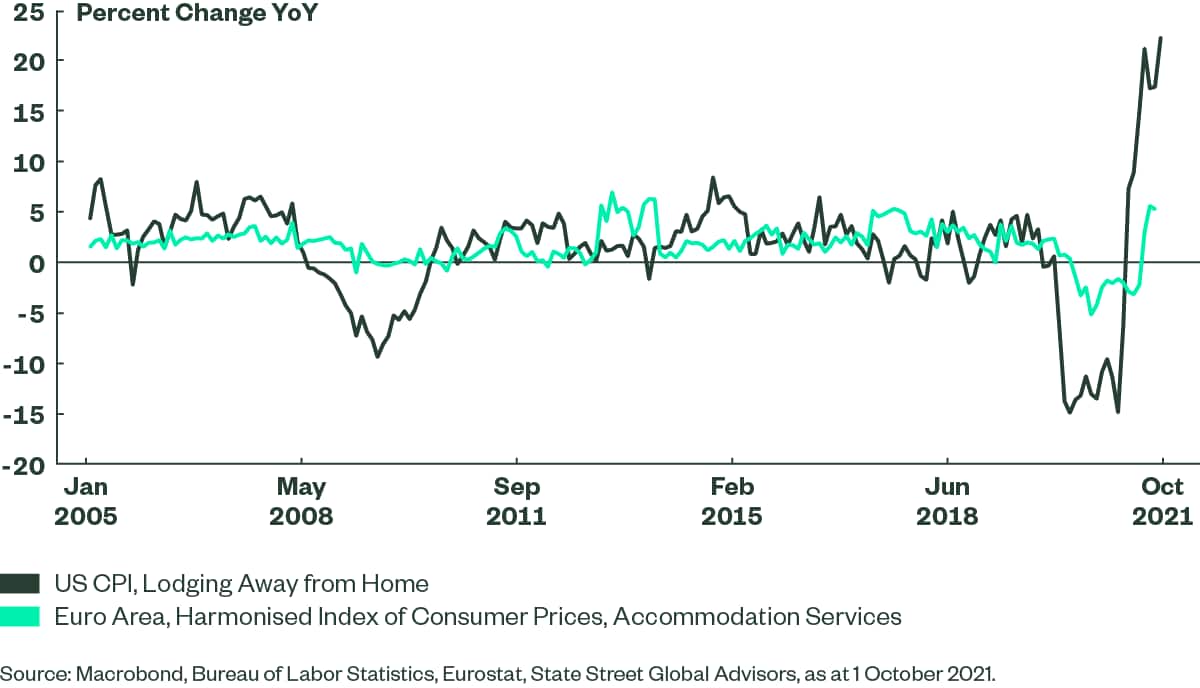 Yet, it is not without explanation. Importantly, European economies have a far higher trade openness compared with the US. While the imports-to-GDP ratio in the United Kingdom (UK) is twice as high as in the US, it is nearly three times as high in the European Union (EU) and the eurozone. Arguably, this makes Europe more of a “price taker” on the global stage, in the sense that global pricing dynamics - such as the current supply chain challenges - have a larger effect on Europe’s own inflation dynamics.

This is visible, for example, in Germany’s more amplified producer price index (PPI) inflation cycle relative to the US, particularly during periods of substantial inflation volatility. Germany’s augmented dependence on the auto industry, with all its associated supply challenges, further exacerbate cyclical inflation pressures (Figure 3).

The Energy Effect on Inflation

The elevated weight of energy in European consumer price inflation (CPI) baskets and the region’s reliance on energy imports and natural gas, all imply a quicker and more substantial CPI response to moves in global energy prices.

The recent surge in natural gas prices, therefore, adds a degree of intensity to cyclical inflation pressures in the eurozone that was not nearly as pronounced three months ago. There are risks here not just for cyclical inflation but importantly to the monetary policy path for the European Central Bank (ECB) (and, to a lesser extent, the Bank of England (BoE)).

While the BoE has been sending hawkish signals for a while and markets are pricing multiple rate hikes over the next twelve months, the ECB has strenuously held onto its dovish narrative. That could become increasingly difficult in the coming months.

There is, of course, a self-correcting mechanism in any price shock as higher prices eventually induce a demand response and the lower demand in turn leads to a moderation in prices. But it matters greatly whether the item in question is a necessity or a “nice-to-have”, whether substitutes are easily available and whether consumers can financially absorb higher prices.

Unfortunately, natural gas/energy primarily fall under the necessity category and there are few easy substitutes. Moreover, with the eurozone household savings rate being close to 20%, far above historical norms, consumers may be even less price sensitive than usual: they can offset energy price hikes through a lower savings rate rather than though spending cuts elsewhere.

As such, the self-corrective market price mechanism could be rather constrained. It could - and likely will - be augmented by administrative policy decisions as governments seek to cap or subsidize some of the price increases.

But it is important to not overly focus the European inflation discussion around energy because the entire pricing power backdrop in the region appears to be much improved relative to the past decade. In particular, not only is the household savings rate very high historically, but overall household balance sheets are also considerably healthier, especially in countries such as Spain, Portugal and the UK.

Households were forced into a multi-year deleveraging phase following the 2008 GFC, which represented a powerful deflationary force. They need not undergo such an adjustment today: they not only have money to spend but are even wiling to borrow.

European households also feel richer. It is always difficult to put a precise number on the so-called “wealth effect”, but it is hard to argue against the proposition that when the value of household assets increases, the directional impact on consumer spending has a positive sign. A quick look at residential property suggests a milder effect in Europe compared with the US, but the effect is noticeably more positive than in the immediate aftermath of the GFC.

We have previously highlighted wages and inflation expectations as necessary - albeit insufficient - conditions for a more inflationary regime. On both these fronts, the European evidence is not nearly as compelling as trends seen in the US, but dynamics could still change going forward.

The state of public sector demand is also important in assessing the inflation backdrop. Here, too, the dynamics at play seem far more supportive. We discussed in separate pieces (here and here) the shift in eurozone fiscal policy toward a more pro-growth, counter-cyclical direction, one that should have positive implications for medium-term growth in the region.

A corollary is that higher growth, i.e., higher demand, should come with higher inflation. Again, it is the direction rather than magnitude that we wish to emphasize. Since, at the end of the day, the most important inflation question is not how high inflation will be in the next five months, but whether a more inflationary regime will unfold over the next five years.

That regime question cannot simply be answered yet, so prepare to see the inflation debate continue to rage well into 2022. But, just like in the US, it does appear that the European inflation dynamics are shifting to a more sustainable direction. While uncertainties abound, it seems wise to watch closely for additional evidence rather than dismiss Europe’s current inflation flare-up as entirely transitory.

The views expressed in this material are the views of Simona Mocuta through 18 November 2021 and are subject to change based on market and other conditions. This document contains certain statements that may be deemed forward looking statements. Please note that any such statements are not guarantees of any future performance and actual results or developments may differ materially from those projected.