The last few years have seen huge disruptions to the financial services sector in Australia. However, these disruptions haven’t occurred in a vacuum; many are global in scope, including saving system complexity, the role of financial advice and heightened environmental, social and governance (ESG) considerations.

As part of our 2019 GR3 survey, we interviewed 195 DC plan sponsors globally, including 41 from Australia. Here, we’re sharing  3 country-specific highlights:

To complement the employee perspective we gained in our 2018 research, our 2019 GR3 survey focused on the employers (or plan sponsors). While the term “plan sponsors” makes less sense in Australia than it did a couple of decades ago, the research was still revealing.

Given the virtual elimination of the employer-sponsored funds, you might think Australian employers have no more reason to be interested in your retirement prospects than they do your mortgage. In practice, however, employers actually do care about their workforce’s retirement prospects. When asked to rank what was most important to their organization with regard to their retirement plan, “doing the right thing for employees” was ranked first by over a third of employers.

The Australian retirement system is, by global standards, a pretty healthy system. Yet, in our previous retirement survey[i] only one in five people in the Australian workforce had a sense of optimism or happiness about their financial situation in retirement.

We believe this lack of member confidence in retirement outcomes has less to do with the overall adequacy of the system and more to do with its complexity. The integration of the Age Pension with superannuation, especially the notorious twin-headed asset and incomes test, is the primary source of complexity. The prevalence of multiple accounts hasn’t improved things in the past either.

These complexities lead to an unsurprising similarity between Australian and global “plan sponsors” in our survey this year: Australian employers have low expected retirement income replacement ratios for their employees approaching retirement and that reflects a global pattern.

1.  Simplicity Is the Ultimate Sophistication

Given that employers in Australia actually care about retirement outcomes for their employees, you would think their primary focus would be on the investment returns and fees associated with the funds being used by their employees. Not so. Mathematically, both are critical to generating solid retirement outcomes. However, the best mathematical calculations in the world are useless if members don’t understand enough to engage.

Our survey indicated a strong local and global focus on simplicity and ease of use over and above investment returns or fees. 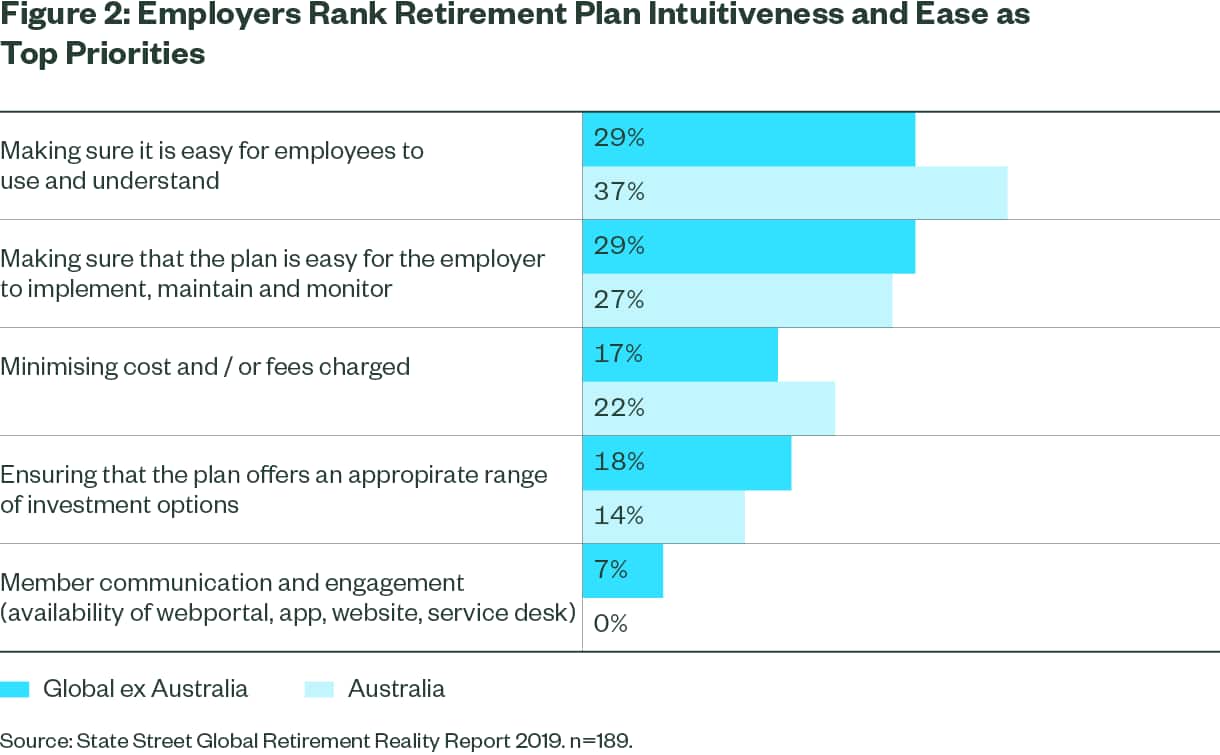 2.  The Power of Advice Is Global

Retirement is a uniquely personal experience, and it is notoriously difficult to find a reliable “one size fits all.” The Australian superannuation industry has struggled with the question of advice for many years: How should advice be delivered? Who pays for it and what is a reasonable cost? What constitutes general as opposed to full-scale advice?

We found that employers are as aware of this problem as anyone else. Over 60% of the Australian employers we spoke to thought their employees placed a high value on access to advice.

Australia is not alone on this issue. As more of the global pensions industry moves from older defined benefit to DC designs, the questions the Australian industry has faced over advice have become global questions.

For some industry participants, ESG considerations are at best a distraction, and at worst a detractor to returns. Sometimes the industry misses the forest for the trees. A more pointed question is to ask whether the industry can continue to operate with absolutely no regard for the environmental or social consequences of its investment decisions, or whether the industry bears no responsibility for the governance of the companies it selects for portfolios. At State Street Global Advisors, we believe that firms that adhere to environmental efficiency, social awareness and the highest governance standards are well-positioned to withstand emerging risks and capitalize on new opportunities.

When we asked fund members in Australia about ESG last year, 47% responded it was important that their investments incorporated companies with ethical values.[i]  We found much the same when we interviewed employers this year, with six in ten (61%) believing it is important to incorporate ESG in their plan’s investments.

As battles for employer default fund status are waged over the coming years, we believe that funds with a clear ESG proposition for both employers and prospective members will start with an advantage over their competitors.

Employers care about themes including system complexity, the role of financial advice and ESG partly because employee receptivity is so high. Our 2018 GR3 survey shows Australian retirees’ top advice to today’s savers is to engage pension planning earlier (71% of respondents), followed by saving earlier (69% of respondents). Advice allows savers to forge their own paths, and the sooner they begin upon the journey, the more rewarding the experience. Employers have the opportunity to guide them to the start.

The views expressed in this material are the views of SSGA Defined Contribution as at 27 September 2019, and are subject to change based on market and other conditions.

All material has been obtained from sources believed to be reliable. There is no representation or warranty as to the current accuracy, reliability or completeness of, nor liability for, decisions based on such information and it should not be relied on as such.

Investing involves risk, including the risk of loss of principal. Diversification does not ensure a profit or guarantee against loss.