A decade after the financial crisis hit and central banks intervened to prevent the system from collapsing, the present credit cycle is approaching its later stages. But with the Federal Reserve (Fed) switching to a more dovish policy stance, and signs of better growth in major economies, this already-lengthy cycle could extend further. Nonetheless, we would expect fatigue to set in eventually, not least because risks are building: corporate leverage is high and interest coverage has been trending downward as rates have risen.

As we anticipated in our Global Market Outlook 2019, markets have lowered their expectations for future interest rates, driven primarily by the Fed calling a halt to its series of rate rises amid slower global growth. However, in our view, expectations should remain at this level, given underlying structural drivers such as lower long-term inflation. Now that future rates are trading closer to the Fed’s long-run rate, we believe US rates are currently close to fair value (Figure 1).

While yields on the 10-year bellwether Treasury bond have fallen from their 3% level in December, we think opportunities remain at the short end of the US curve. The credit cycle in the US is more advanced than elsewhere in the world and we are starting to see pockets of excess there. While these are yet to prove sufficient to end the cycle, certain indicators are worth monitoring. 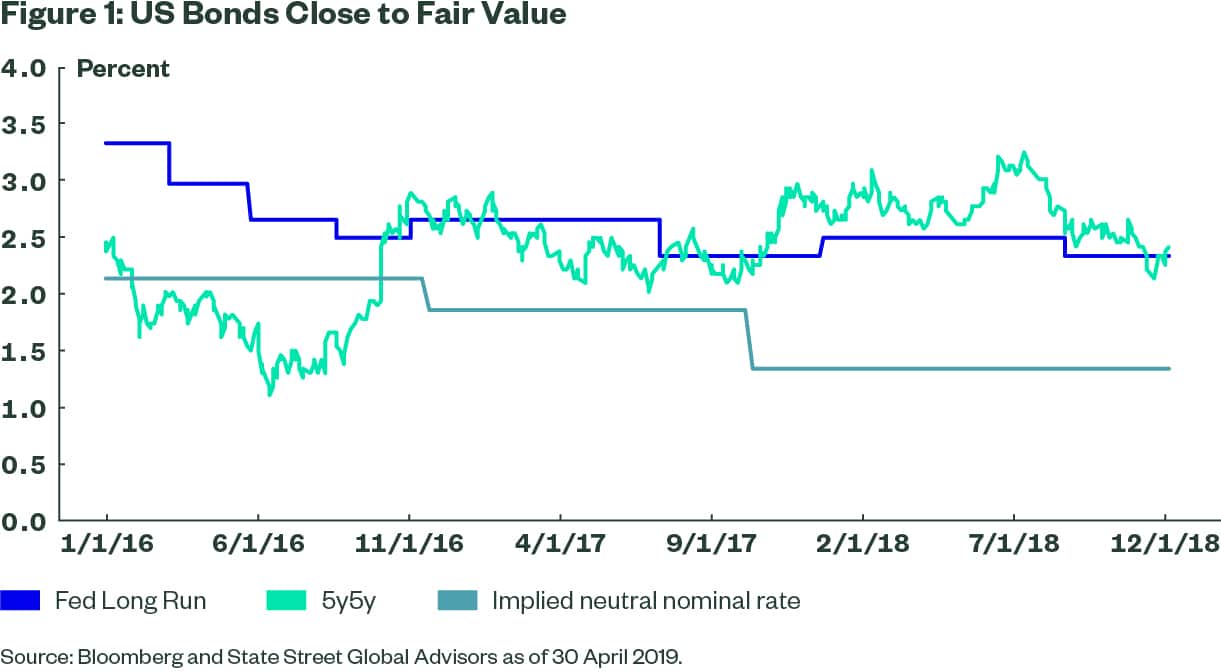 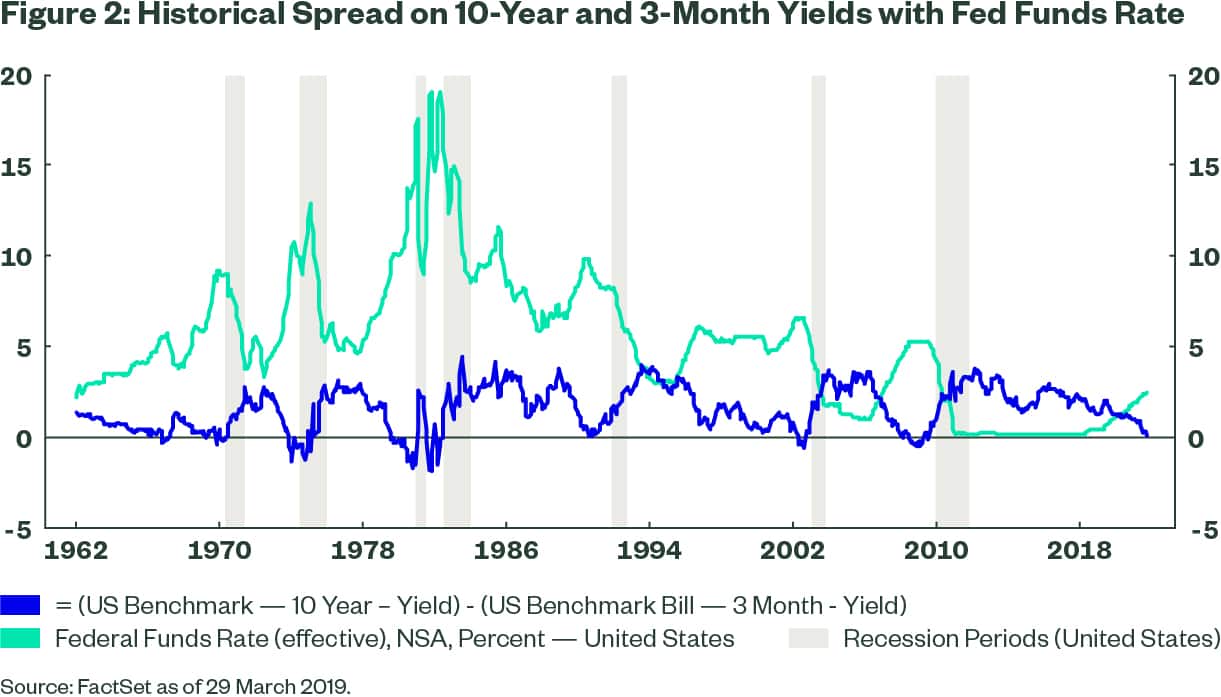 In the first half of 2019, the yields on the 10-year and three-month Treasury bonds briefly inverted, stoking fears of a recession. However, the immediate implications of this development could be limited as the yield relationship between two-year and 10-year bonds remained positive throughout the period. Historically, the 2yr/10yr part of the curve inverts an average of three-and-a-half months prior to that of the 3m/10yr relationship, suggesting the inversion seen earlier this year did not fit the usual pattern, though we have since seen further inversions.

Moreover, a yield curve inversion, even when sustained, may signal an approaching recession anytime in the subsequent six months to four years, depending on the growth outlook. At present, GDP growth has been less impressive than in previous cycles, suggesting we may have further to go before the economy overheats. Growth is expected to be moderately positive for the next six-to-12 months, at least in the US, subject to risks such as a further escalation of trade tariffs.

The Fed, having been spooked by the growth slowdown in late 2018, is likely to keep rates on hold and refrain from further normalization of its balance sheet until stronger economic data emerges. There is limited pressure to tighten policy while unemployment is low and inflation remains contained. Therefore, we do not believe a recession driven by a monetary policy mistake is imminent, despite being in the late stage of this cycle.

While rates remain low and household debt levels are not extended, corporate leverage is high. It seems less likely that companies will borrow significantly more without a big increase in demand for new issuance. Investment grade credit spreads have tightened in 2019 in both the US and Europe. Spreads in the high yield market have also compressed in the first half, thanks to more lenient monetary policy and changing market dynamics. Issuance in the high yield market has declined, while it has increased in leveraged loans.

Not only has the amount of leveraged loan issuance increased, but there has been deterioration in credit quality, with more and more loans being issued at the lower end of the credit spectrum; in our view, this could be an early indicator of excess. Equally, the trend toward issuing more European debt at BBB-ratings level and below suggests that risks may be building for when the cycle finally turns. Thus far, however, the banking system appears to be stable with central banks anxious not to withdraw liquidity too quickly.

Opportunities Beyond the US

n Europe, yields look rich in countries such as Germany and the UK where levels of political risk and subpar growth are of concern. At the same time, countries such as Italy are showing signs of stabilization: for example, non-performing Italian loans have fallen sharply as a percentage of total loans. However, Italy also remains exposed to political risk and we are cautious on Italian spreads.

In our view, there is more value to be had in emerging markets, where real yields still look attractive versus developed market yields, subject to trade risk. China continues to offer opportunities for higher yields as more of its onshore bonds become available to global investors through index inclusion. Moreover, following the sell-off in 2018 and further fears caused by a ratcheting up of the trade dispute in May, EM currencies continue to appear undervalued (Figure 3). They have not yet participated to the same degree as EM equities and bonds in the global rally in the first half of 2019, thanks in part to the continuing strength of the US dollar. (See Investment Theme: Emerging-Market Giants Drive Growth Despite Trade Risk). 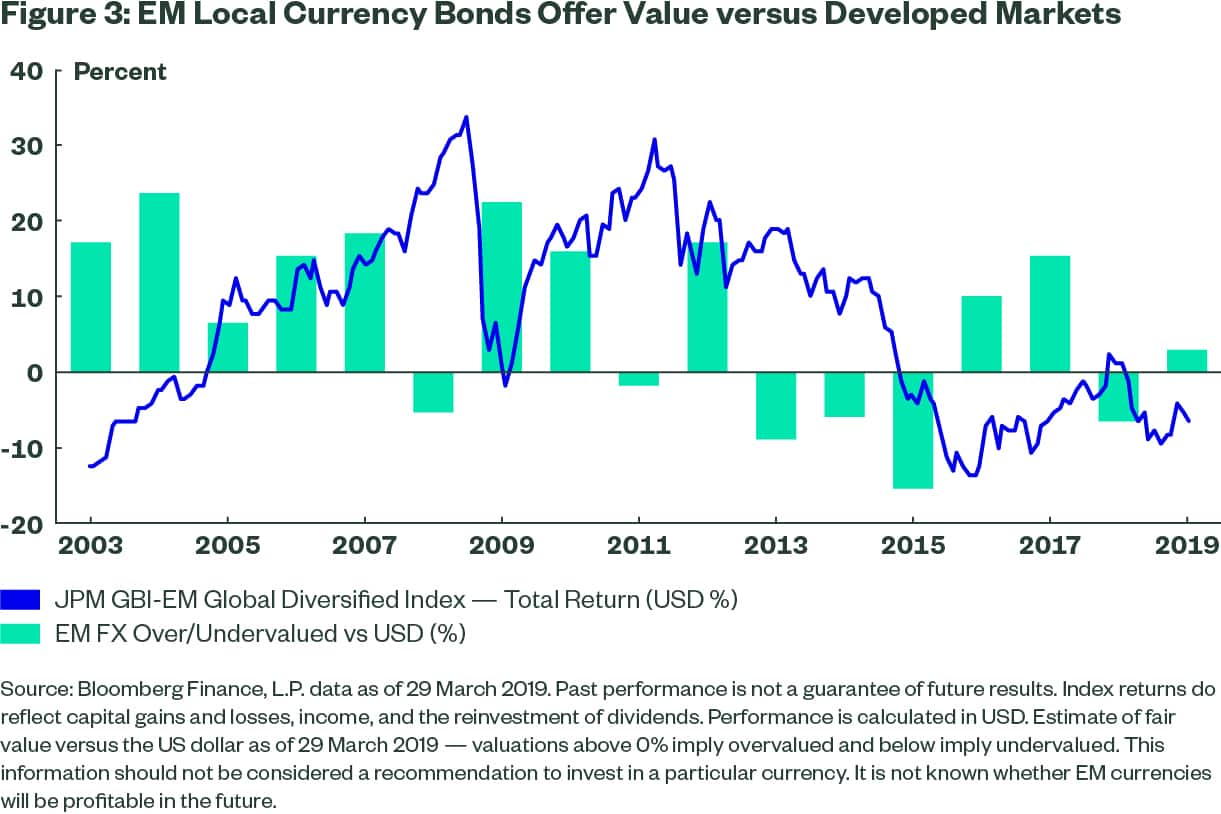 Our currency view on the US dollar is that it looks expensive on a long-term basis, and that it would be reasonable to expect some reversion into 2020, if not before. That said, we have held these long-term views for some time and cheap currencies have remained cheap and expensive ones have stayed expensive. This has been partly due to US exceptionalism, reflected in higher growth and high yields, which has kept the dollar well supported. Now that the Fed has reduced its expected interest rate policy path and US growth has slowed, we have moved to a more neutral position on the dollar. Until we see evidence of sustained growth outside the US, the dollar is unlikely to trend significantly lower. Moreover, further escalation in the US-China trade war is likely to depress global growth relative to the US, delaying US dollar weakness.

The euro remains stuck in an ultra-low growth and negative interest rate regime. Despite some signs of stabilization, growth in the major economies remains sluggish. If it picks up, the euro should begin to perform, but higher-yielding and more cyclically-sensitive Antipodean and Scandinavian currencies are likely to benefit even more. In the case of sterling, the UK has reasonably positive interest rates but it will be difficult to unlock long-term value until the government achieves a final Brexit deal with the EU. The Japanese yen is at depressed levels thanks to the Bank of Japan’s near-zero rate policy and local investors seeking higher yielding opportunities elsewhere; however, the yen continues to provide diversification from equity market risks.

These broad cyclical and policy themes are, for the most part, fully reflected in current exchange rates. As a result, currency volatility has been falling and currencies have settled into trading ranges within which they fluctuate sharply on headline risk. In this environment, we aim to look through the short-term noise and position portfolios to capture the longer-term potential reversions to fair value. On this basis, we see value in the pound, the yen and Scandinavian currencies, while the US dollar and the Swiss franc look overbought; we use this framework to establish long-term hedging policy. From a shorter-term tactical perspective, we tilt toward yield capture, buying currencies that offer decent yields and cheap valuations, such as the Norwegian krone and Australian dollar, and selling those that are both expensive and ultra-low yielding, such as the euro.

While the risk of a recession cannot be dismissed, it is not our baseline scenario for the next six months. The recent yield curve inversion does not increase our concerns about the US economy. We think recent declines in yields reflect longer-term structural factors as well as worries about lower growth, but if fund flows continue to move into bonds and away from equities then momentum and sentiment effects could reinforce the move lower in yields. More positively, the decline in interest rates should make above-average debt-to-EBITDA ratios less onerous to service, while moderate capex intentions reflect a desire to solidify corporate balance sheets. Pockets of excess are appearing, particularly in the leverage loan market. But with policy cushions in place from both the Fed and the ECB, investors in credit assets should continue to benefit, albeit accompanied by higher volatility as the cycle extends.

The information provided does not constitute investment advice and it should not be relied on as such. It should not be considered a solicitation to buy or an offer to sell a security. It does not take into account any investor's particular investment objectives, strategies, tax status or investment horizon. You should consult your tax and financial advisor. All material has been obtained from sources believed to be reliable. There is no representation or warranty as to the accuracy of the information and State Street shall have no liability for decisions based on such information. The whole or any part of this work may not be reproduced, copied or transmitted or any of its contents disclosed to third parties without State Street Global Advisors' express written consent. This document may contain certain statements deemed to be forward-looking statements. Please note that any such statements are not guarantees of any future performance and that actual results or developments may differ materially from those projected in the forward- looking statements. Bonds generally present less short-term risk and volatility than stocks, but contain interest rate risk (as interest rates raise, bond prices usually fall); issuer default risk; issuer credit risk; liquidity risk; and inflation risk. These effects are usually pronounced for longer-term securities. Any fixed income security sold or redeemed prior to maturity may be subject to a substantial gain or loss.  Generally, among asset classes, stocks are more volatile than bonds or short-term instruments. Government bonds and corporate bonds generally have more moderate short-term price fluctuations than stocks, but provide lower potential long-term returns.  U.S. Treasury Bills maintain a stable value if held to maturity, but returns are generally only slightly above the inflation rate. Currency Risk is a form of risk that arises from the change in price of one currency against another. Whenever investors or companies have assets or business operations across national borders, they face currency risk if their positions are not hedged. Currency valuations above 0% imply overvaluation and below 0% imply undervaluation. This information should not be considered a recommendation to invest in a particular currency. It is not known whether emerging-market currencies will be profitable in the future.Investing involves risk including the risk of loss of principal. Past performance is not a guarantee of future results.