Warren Buffett’s claim that investing $10,000 in an S&P 500® Index fund in 1942 would have far outperformed a similar investment in gold lacked context and is in no way an apples-to-apples comparison.

The price of gold was fixed relative to currencies until President Nixon cut the final link in 1971. This means the first 30 years of Buffet’s comparison is meaningless.

This post was written with contributions from Diego Andrade. Diego is a Gold Strategist in the Global SPDR Business.

Investing is a profoundly personal exercise. We all have individual viewpoints and goals that we use to shape our investment decisions. As a veteran with more than 40 years working in the financial industry, I have seen the influence of personal preference play out through the lens of gold investing. Some investors would never think to build a portfolio without gold while others would never think to build a portfolio with it. My job as a gold expert is to ensure investors are fully educated on gold and its potential role in a portfolio so they can make an informed decision on how they approach the precious metal when managing their investments.

That is why comments Warren Buffett made about gold at Berkshire Hathaway’s annual meeting struck me, and I felt they needed to be placed in context. After all, when the Oracle of Omaha speaks, investors listen, and I want them to be adequately informed.

In May of 2018, Buffett asked his audience to compare the returns made by investing $10,000 in gold in 1942 vs. investing that same amount in an S&P 500® Index fund.1 He then revealed that the S&P 500 investment would be worth $51 million today compared with roughly $400,000 for gold. This comparison, with no additional insight, would cause almost any investor to question a gold investment. After all, using Buffett’s numbers, we’re talking about a 12.06% compound annual growth rate (CAGR) for stocks vs. a 5.04% CAGR for gold, which results in whatooks like a lost investment opportunity worth millions of dollars over 76 years.

But it’s important to look under the hood when analyzing return figures. Below are three reasons I believe Buffett’s premise is misleading, and it fails to present investors with enough context to understand why this is not an apples-to-apples comparison.

1. The history of the spot price of gold

From the ancient kingdom of Lydia in 200 BCE to the modern US Treasury, gold has played an influential role in international monetary systems. Gold was established as the sole basis for redeeming paper currency in 1900 when President William McKinley signed the Gold Standard Act. It set the value of gold at $20.67/oz, and, most importantly, it meant that for the next 71 years the spot price of gold ($/oz) would be controlled by a branch of the US government.2

By March 1942 the Federal Reserve had adjusted the spot price of gold to $33.85/oz. Two years later, the Bretton Woods system was signed, and the US dollar was pegged to gold at $35/oz. The system lasted until President Nixon ended it on August 15, 1971, when gold’s value had been increased by the Federal Reserve to $43.28/oz.3

But comparing returns between the S&P 500 and gold starting around the time President Nixon removed the US Dollar from the gold would provide more of an apples-to-apples return comparison. Nixon’s policy move meant that free markets, not the US Fed or any other central bank, would be in control of pricing gold, the same way free markets dictate the value of the S&P 500. Looking at that same initial $10,000 investment in gold and the S&P 500, measured since the second quarter of 1971, shows the gold investment would have appreciated to $311,640 while the S&P 500 investment would stand at $1,097,900. This is equivalent to a 10.62% CAGR for the S&P 500 vs. a 7.61% CAGR for gold.4 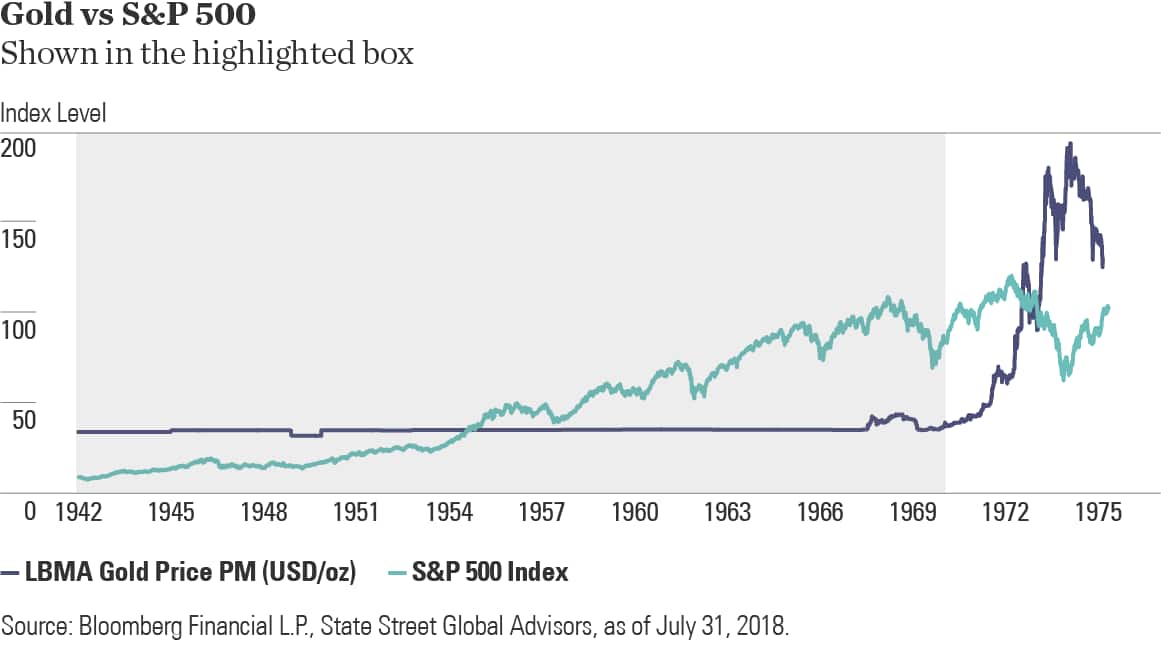 In 1933, President Roosevelt signed “Executive Order 6102,” which outlawed private ownership of gold coins, bullion and certificates within the continental US. It only allowed individuals to own up to $100 in gold coins. A violation of the order was punishable by a fine of up to $10,000 or up to 10 years in prison, or both. In other words, Americans had to sell their gold to the Federal Reserve. The policy lasted till December 31, 1974.

It was illegal for a US citizen to make a $10,000 gold bullion (or coins) investment in 1942, which makes Buffett’s comparison between an investment of that size in gold and the S&P 500 moot. An investor simply would not have been able to purchase that much gold—unless he or she chose to risk a massive fine or imprisonment.

Beyond this, the S&P 500 Index's composition is constantly changing as winners and losers emerge. Gold, on the other hand, is one holding that is not replaceable or interchangeable. An investment in gold is an investment in gold.

Don’t dismiss the benefit of diversification

When building portfolios, investors must consider not only the potential return each investment may provide, but also how those investments behave relative to each other. Diversification has historically played a significant role in the performance of a portfolio, as this chart demonstrates. The chart captures some of the major stock market shocks—or Black Swan events—of the past decade. While some assets, like commodities and global stocks, plummeted in value during these tumultuous market events, gold held its value or appreciated in price. By demonstrating a -0.01 correlation to the S&P 500 from August 1971 to June 2018, gold has the potential to act as a portfolio diversifier, helping to improve its risk-adjusted returns. 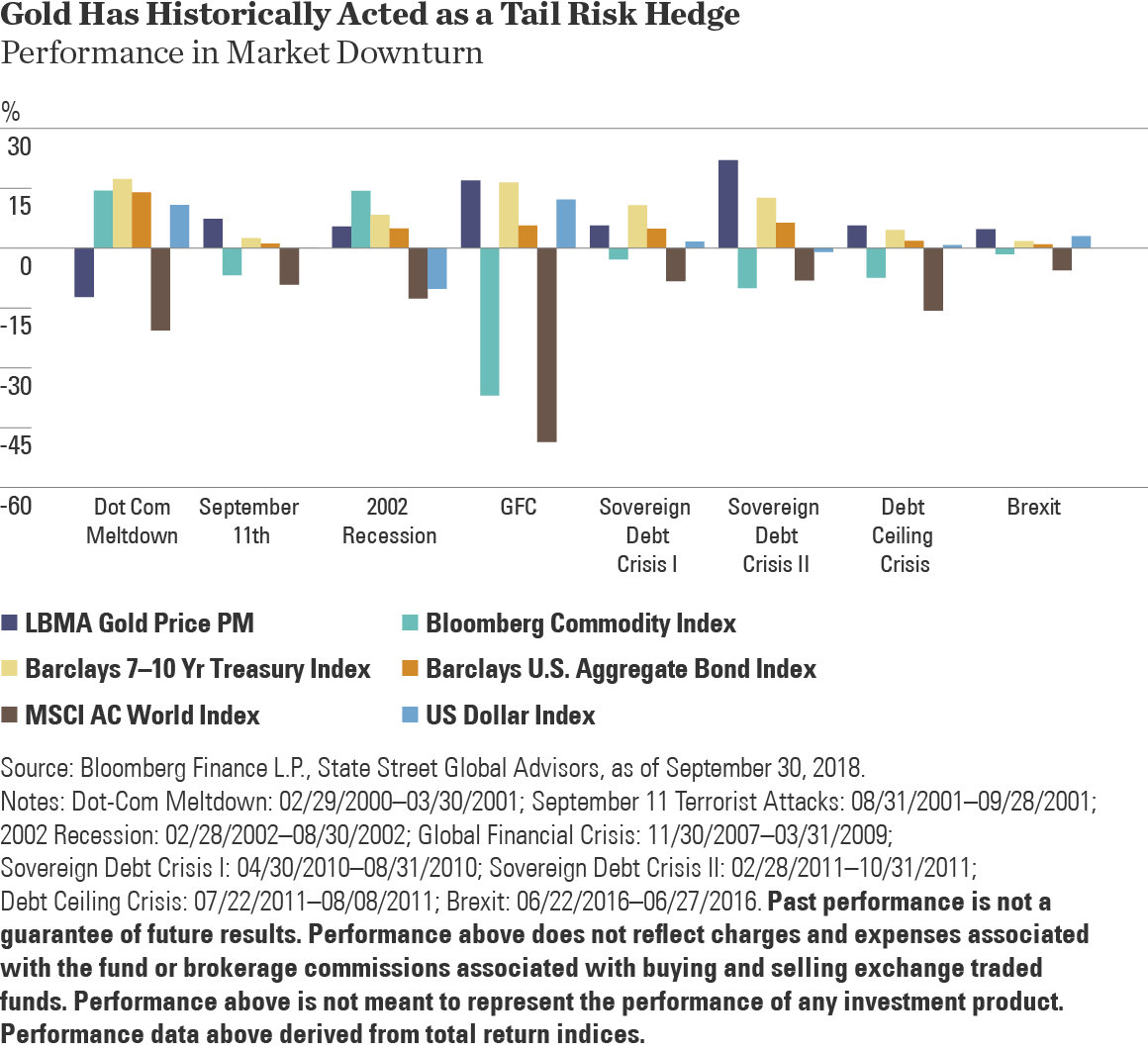 I advise that investors consider allocating between 2% and 10% to gold, depending on their specific portfolio goals, as a core diversifier.

5 "The Future for Investors –Why The Tried and The True Triumphs Over The Bold and The New" by Jeremy J. Siegel, Date as of March 8, 2005. Bloomberg Financial L.P. & State Street Global Advisors, as of September 30, 2018.

A black swan is an event or occurrence that deviates beyond what is normally expected of a situation and is extremely difficult to predict.

The historical tendency of two investments to move together. Investors often combine investments with low correlations to diversify portfolios.

The S&P 500, or the Standard & Poor’s 500, is an index based on the market capitalizations of 500 large companies having common stock listed on the NYSE or NASDAQ. The S&P 500 Index components and their weightings are determined by S&P Dow Jones Indices.

Commodities and commodity-index linked securities may be affected by changes in overall market movements, changes in interest rates, and other factors such as weather, disease, embargoes, or political and regulatory developments, as well as trading activity of speculators and arbitrageurs in the underlying commodities.

Investing in commodities entails significant risk and is not appropriate for all investors.