Gold’s lack of coupon and dividend deter some investors from owning the precious metal.

This new normal may serve to change the customary tools investors typically rely on to anchor portfolios and increase gold’s attractiveness as a strategic allocation.

This post was written with contributions from Diego Andrade. Diego is a Senior Gold Strategist in the Global SPDR Business.

One of the common barriers I’ve heard from investors when it comes to making a strategic allocation to gold has been that it does not pay coupons or dividends. That’s the staunch claim of investment powerhouse Warren Buffet that has prompted many of his disciples to dismiss gold as a strategic and defensive tool and, instead, favor the income component of equities or fixed income to anchor portfolios. Gold, however, doesn’t offer a yield because it has no default risk to compensate its holders, a key rationale for its strong returns historically during negative interest rate environments, shown in the figure below. With nearly $15 trillion of total global debt now offering investors negative yields and the prospect of central banks around the world turning increasingly dovish, perhaps even the Oracle of Omaha might reconsider his stance on gold as a strategic asset in a portfolio, especially as gold’s price continues to rise.1

Since the 2008–2009 Financial Crisis, central banks around the globe have increasingly turned to less conventional methods—such as negative interest rate policies or quantitative easing—to manage their recovery from the liquidity crunch, and adjust to slowing global growth, and shifting international dynamics. Today, some 15 countries offer negative nominal rates somewhere along their yield curve, and another wide swath is looking at zero or negative real rates after being adjusted for inflation.2 While some may question if negative interest rates (nominal or real) are an effective tool, it’s becoming harder to ignore the mounting negative debt pool, the growing number of players partaking in the negative yield experiment, and the role it may play in redefining the new normal for investors over the next decade. 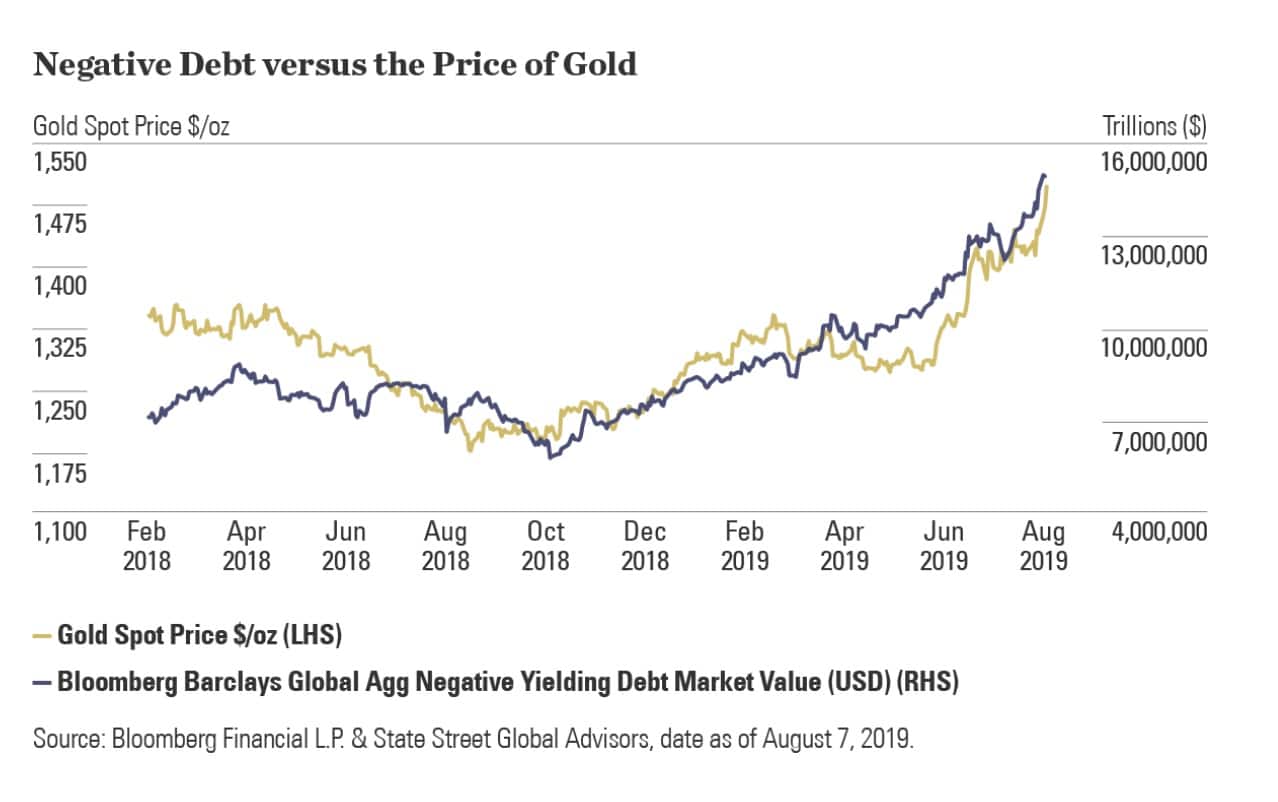 The eurozone provides an interesting near-term illustration of negative rate policies. In a bid to stimulate the economy, the European Central Bank (ECB) introduced negative interest rates in June 2014, lowering its deposit rate to -0.10%. Although initially envisioned as a temporary measure, the ECB has continued to lower the deposit rate—to -0.40% as of March 2016—a move that has had a significant impact on European yields. Sixty-three percent of eurozone government debt currently provides negative nominal yields. 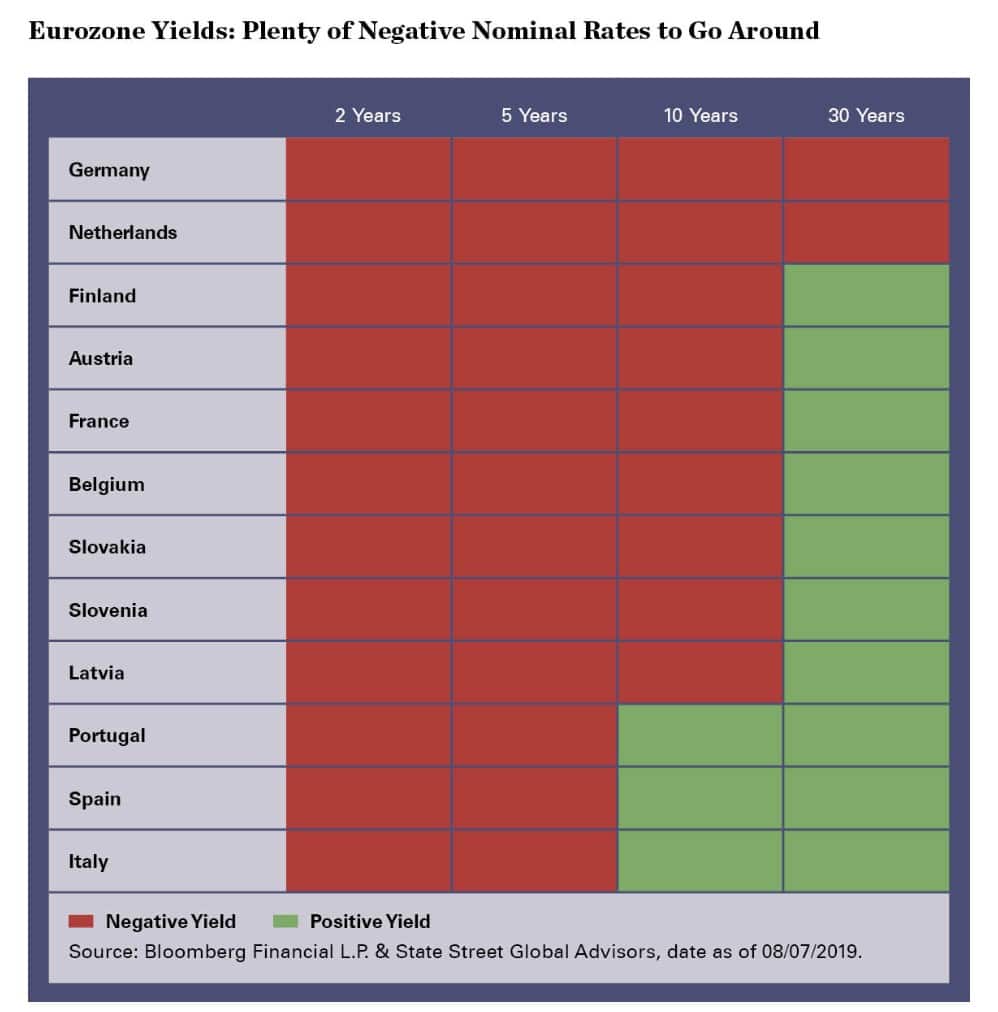 Notably, since the ECB’s policy move in 2016, European investors have poured in excess of $26 billion into gold-backed exchange traded funds (ETFs), compared to $13 billion by US investors over the same timeframe.3 Although there are several factors that could be influencing the difference in flows—weaker economic growth, rising geopolitical tensions, Brexit, and/or a depreciating euro—the lower yields have clearly driven the European investor’s appetite for gold amid a growing sea of negative yielding debt.

What if the Fed joins the negative rate party?

In the US specifically, global monetary policy has shifted by 180 degrees this year—changing course from rate increases to rate cuts and ending the  balance sheet runoff earlier than expected. Although negative nominal rates are unlikely in the US based on legislative and institutional constraints, even the US Fed is actively entertaining new and creative policy ideas to manage the backdrop of slower growth and fulfill its mandates—like standing repo facilities.

Despite the Fed sitting in better shape than many other central banks to combat a recessionary scenario—having increased its rates nine times from December 2015 to December 2018 and landing rates in the 2.25–2.50% range—a negative real rate strategy is not outside of the realm of possibility should inflation spike, domestic growth slow, or the US dollar face too strong of a headwind. Although a negative nominal rate policy is likely way down on the list of options for the Fed, it is worth noting that during the last five rate cut cycles, the Fed has lowered rates, on average, approximately 3.5%.4 This is a trend that could land the US in negative territory should the Fed decide to follow the playbook of some of the other central banks around the globe.

Squaring up to the current coupon and dividend realities

As global tensions rise and growth slows, it looks as though fewer countries are likely to escape employing some of these newer policies—such as negative interest rates, either nominal or real—even in developed countries, like the US, UK, or Canada. In fact, when looking at real rates that have been adjusted for inflation, investors are facing an even larger pool of negative yields, with upward of $25 trillion of global government debt offering negative yields on an inflation-adjusted basis.

Global investors are increasingly facing either nominal losses with negative yielding investments or, alternatively, they are being driven to take deeper steps along the risk curve to continue capturing income and yield. In my opinion, this makes the case for a gold allocation potentially stronger—both in terms of realized return and relative risk—especially with the historic long-term uncorrelated returns gold has provided over time relative to other traditional equity and fixed income asset classes.5 And if eurozone investors and their gold buying provides a window into how negative rate policies may potentially affect investing behavior, it appears that such policies may be pushing on portfolio construction theory and changing some of the customary tools that investors typically rely on to anchor portfolios and navigate the shifting investment paradigms. Although gold pays no dividend, in a negative rate environment, that may justifiably earn the big “So what?” from investors.

The views expressed in this material are the views of George Milling Stanley and Diego Andrade through the time period ending September 2019 and are subject to change based on market and other conditions. This material is for informational purposes only and does not constitute investment or tax advice and it should not be relied on as such. It should not be considered a
solicitation to buy or an offer to sell a security. It does not take into account any investor’s particular investment objectives, strategies, tax status or investment horizon. There is no representation or warranty as to the current accuracy of, nor liability for, decisions based on such information. The whole or any part of this work may not be reproduced, copied or transmitted or any of its contents disclosed to third parties without State Street Global Advisors' express written consent.

Investing in commodities entail significant risk and is not appropriate for all investors.  Commodities investing entail significant risk as commodity prices can be extremely volatile due to wide range of factors. A few such factors include overall market movements, real or perceived inflationary trends, commodity index volatility, international, economic and political changes, change in interest and currency exchange rates.