The world has experienced transitions in fuel types several times before, each reshaping the accumulation of power and capital across the globe. The emergence of oil in the twentieth century lessened the world’s dependency on coal, bringing about the rise of petrostates and geopolitics of oil secured by Pax Americana. The unwinding of that global consensus will profoundly affect the world economy, with implications for current account imbalances and associated financial flows.

It is important to first understand energy’s role in current global account imbalances. Figure 1 shows the long-term current account balances of major economies. It reveals that emerging market (EM) oil exporters, plus Russia, show chronic surpluses, which widen and narrow in line with the oil cycle. On average, oil surpluses constitute roughly half of major economy surpluses over time and are frequently in excess of 1% of global GDP. 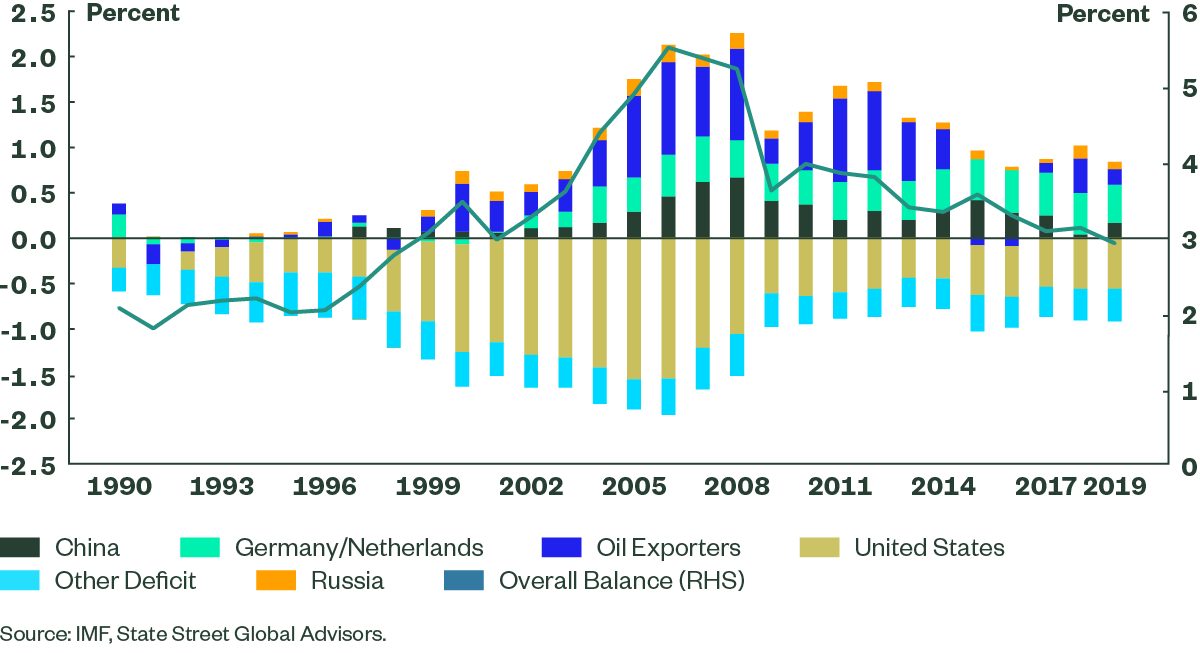 As the world weans itself off fossil fuels, these current account surpluses should gradually fade.1 Conversely, large oil importers with chronic deficits, such as India and Turkey, should see a structural improvement in their trade profile. This profound shift – even if occurring gradually over decades should have an impact on global exchange rates and sovereign borrowing costs as the terms of trade change.

Decline in Demand for US Dollar

As current account balances and trade flows change, financial accounts will get affected as well. Currently, an overwhelming majority of oil reserves are invested in financial assets in developed markets (DM), especially in US dollar-denominated assets. Most of the savings vehicles are either central banks or sovereign wealth funds that use offshore investment as a strategic buffer and policy tool.

With the exception of Russia, most oil economies thereby re-cycle their oil surpluses into US dollar-based assets. These financial flows constitute a perennial source of demand for the US dollar and US financial assets such as US Treasuries, corporate debt and equities. The energy transition is likely to diminish this demand, all else being equal.

Fossil Fuel Economy Will Not be Replicated

For fossil fuels, the largest part of the value chain resides upstream in resource extraction. For renewables and other energy sources, natural resources do play a critical role, particularly select precious metals that are critical inputs into components for energy production, storage and distribution. These include industrial metals such as copper, nickel, lithium and cobalt as well as precious metals used for battery or fuel cell production such as platinum, palladium and rhodium.

However, the dependency on, and concentration of, such resources will not replicate the fossil fuel economy. There are more substitutes and alternatives, and importantly, the value resides particularly in the technology required to fuse natural resources with hardware to produce vital capital goods, such as solar cells and wind turbines.

Technology to Take Over

In this context, we believe global imbalances will accrue to countries at the technological forefront. As renewable technology is heavily reliant on digital components, leaders in digital hardware should benefit tremendously from the energy transition. Consequently, many of the beneficiary countries are in Northeast Asia, and to a lesser extent, in Northern Europe.

For economies such as South Korea or Taiwan, this adds another pillar to their structural current account surpluses and provides continued pressure for currency appreciation. While this shift will be a major economic tailwind for these countries, they will need to either increase their domestic investments and capex or build up ever larger excess reserves. Either way, the result will likely be a policy trap, with global pressure to allow exchange rate appreciation while competitor nations ramp up their production capability and sophistication.

The two largest surplus generators, China and core eurozone (Germany + Netherlands), face a complex challenge. China and Germany are significant oil importers, and the energy transition is designed to reduce oil trade balance as renewable energy is generated domestically (Figure 2). Moreover, as large producers of renewable components, these countries are likely to fare well during the transition period, too.

Figure 2: Trade Balance of China and Germany – Oil vs Non-Oil

But the main consequence would simply be even larger surpluses. After the eurozone crisis of 2010-2012 and the US-China Trade War of 2018-2019, it should be obvious that structurally larger surpluses on the part of either economy would exacerbate geopolitical tensions and add stress to the global economy. The policies of these states would logically need to favor boosting domestic demand to offset any further improvement of the external balance sheet.

In Germany’s case, any serious climate policy would necessitate fiscal expansion at a national and European level – not only to support the actual energy transition but also to manage the negative side effects of a reduced oil intensity on Germany’s trade account. The challenge for China is that it is not as clear whether such a boost would align with the country’s dual circulation strategy envisioned for the coming decade.2

The energy transition is akin to a slowly unfolding yet inevitable external shock that resets exchange rates and national balance sheets. For long-term investors who are incorporating Environmental, Social and Governance metrics into their portfolios, it is important to assess whether a portfolio’s exposure adequately reflects the changing nature of the global economy. Not only are there countless countries and industries that will benefit from reduced carbon intensity, but the ripple effects of fewer investment flows from current fossil fuel champions also need to be accounted for over the longer term. Currencies and sovereign debt are the asset classes most likely to be affected, both among developed and emerging nations.

Foremost, the energy transition is a structural headwind to US dollar’s dominance. It is a boost to the currencies of EM and DM countries that are obvious winners of the energy revolution (e.g., Northeast Asia), benefitting from the demand shock for their export goods. Some of these extra earnings will raise local capex, thus engendering a virtuous cycle. Lastly, big energy importers will gain from the transition, provided they can mobilize the capital to re-tool their economies away from fossil fuels. That ability will be another key differentiator among EM countries going forward.

While oil producers may all seem to be on the losing side of the equation, this overlooks the possibility of producers with large market share, low cost base and coherent post-oil economic policy being able to cope with these transitions. On the flipside, marginal, high-cost producers will be penalized with higher capital costs and shrinking fiscal resources.

1BP estimates that the most aggressive Net Zero commitments imply a halving of oil consumption by 2035.

2Dual-circulation strategy refers to China’s policy of aiming for developing its internally focused economy in parallel to its export-oriented economy. The concept remains vague and it is not clear how this will shape China’s current account profile.

The views expressed in this material are the views of Elliot Hentov through 08 September 2021 and are subject to change based on market and other conditions. This document contains certain statements that may be deemed forward looking statements. Please note that any such statements are not guarantees of any future performance and actual results or developments may differ materially from those projected.