What a difference a crisis makes. Over the past few months, there has been a significant shift in sentiment toward greater government spending. Today’s near universal opinion is that massive fiscal stimulus is still needed to overcome the negative economic consequences of the pandemic. US lawmakers have already passed $3.5 trillion in legislation to combat COVID-19, including December’s $900 billion Consolidated Appropriations Act. In addition, the Biden administration’s $1.9 trillion stimulus package is expected to become law before an earlier round of unemployment insurance benefits expires on March 14. Soon after, President Biden will give his first address to a joint session of Congress outlining his next policy goals, including a multitrillion-dollar infrastructure plan.

Many observers will lazily attribute the increased appetite for government spending to the Democratic Party, now in control of both the White House and Congress. But this change is more complicated than the routine transition of power in Washington. Besides, it’s tough to take the Republicans’ newfound fiscal restraint too seriously. They passed the Tax Cuts and Jobs Act of 2017 when the economy was on much firmer footing than it is today.

In a break from the past, it’s not just politicians clamoring for more spending. A growing number of economists, academics, industry leaders and capital market participants suggest that the solution to many of today’s challenges is greater fiscal stimulus. They claim that the risk isn’t spending too much, it’s spending too little. Despite the potential risks, it’s time to go big!

How Did We Get Here?

The seeds of the spending marathon were planted more than a decade ago in the policy responses to the Global Financial Crisis (GFC). With the benefit of hindsight, many people have concluded that the fiscal policy response to the GFC — the $787 billion American Recovery and Reinvestment Act of 2009 — was too small. The economic recovery was exceedingly dependent on easy monetary policies, especially Quantitative Easing (QE) and ultra-low interest rates. And ultimately, the burgeoning economic rebound was curbed prematurely when the US and several European Union (EU) countries implemented fiscal austerity measures from 2011 to 2014. In a series of research papers, the Institute of International Finance (IIF) has asserted that austerity was probably the wrong choice, particularly for the EU. In fact, IIF Managing Director and Chief Economist Robin Brooks has said, “Fiscal austerity is a mistake.”

The fallout from these perceived policy blunders was an underwhelming recovery from the GFC that left the economy more vulnerable to the negative impacts from the COVID-19 pandemic. Further, while the heavy reliance on monetary policy did bolster financial asset prices, many now believe these same policies unintentionally increased income inequality.

Today’s policymakers have decided there’s a better way to respond to the pandemic, while simultaneously addressing the shortcomings of the GFC policy response. In a February 4 op-ed in The Washington Post, former US Treasury Secretary Larry Summers describes the combination of December’s stimulus bill and Biden’s $1.9 trillion COVID-19 relief plan as “the boldest act of macroeconomic stabilization in US history.” Summers writes, “Its ambition, its rejection of austerity orthodoxy and its commitment to reducing economic inequality are all admirable.” Today’s lawmakers are determined not to repeat past mistakes. Pandemic policy responses stand in stark contrast to GFC policies.

First, compare the more than $5 trillion in legislation that will likely be enacted to combat COVID-19 with 2009’s $787 billion fiscal stimulus package. The difference is staggering. The pandemic response has also employed fiscal and monetary policy to combat the challenges of COVID-19, based on the criticism that monetary policy carried too much of the burden during the GFC recovery. And, this time around, austerity politics are dead. The Biden administration has made it clear that we should be investing in deficit spending in order to generate economic growth. With so many Americans still suffering from the negative impacts of the pandemic, it’s not time to be stingy. It’s time to loosen up the purse strings.

By addressing the weaknesses from the GFC policy response, lawmakers expect a more robust and sustainable economic recovery from the pandemic. There’s even hope that the powerful combination of fiscal and monetary policy will result in higher and more permanent future economic growth rates. The addition of greater fiscal policy is expected to narrow wealth and income gaps created by relying too heavily on monetary policy over the past decade. And, finally, Biden’s build back better agenda may prepare the economy for the next crisis. 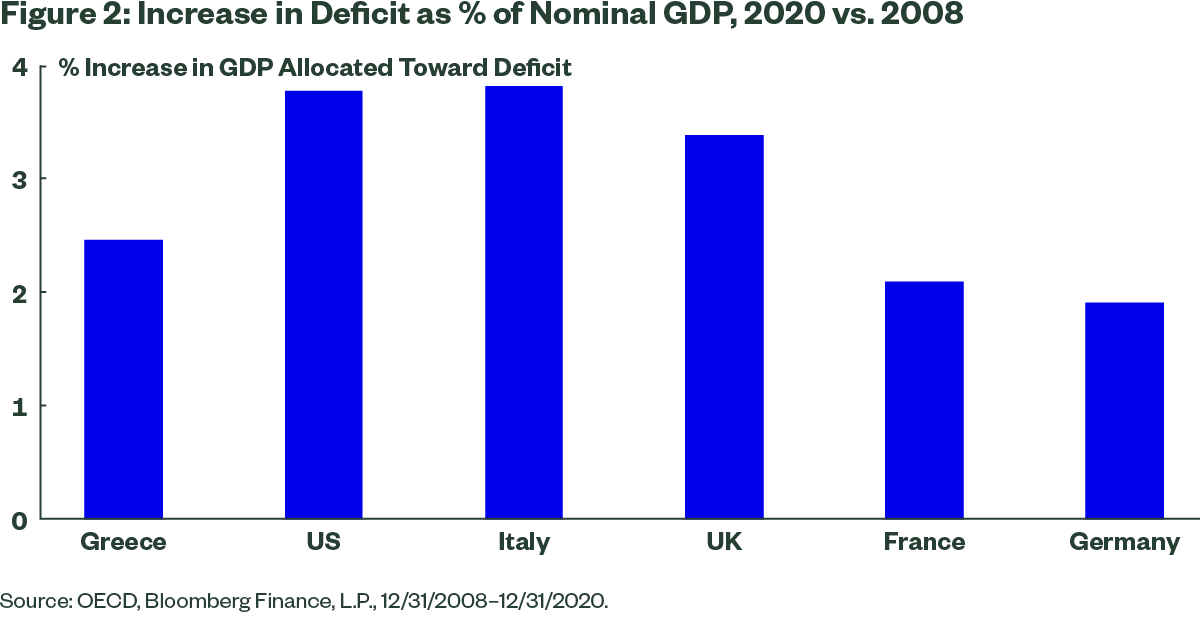 But Will It Work?

What’s fueling this confidence in fiscal stimulus spending? Not all that long ago, in February 2020, the unemployment rate was 3.5% and government budget deficits were rising. Yet, to the surprise of many, this pre-pandemic environment didn’t set off an inflationary spiral or spark higher interest rates. In fact, despite the current massive fiscal and monetary policy actions to combat the pandemic, so far, inflation and interest rates have been subdued. And, as long as the mighty US dollar remains the world’s reserve currency, we can spend our way to prosperity. Dangerously, because nothing bad has happened yet as deficits have been soaring, we’ve convinced ourselves that nothing bad will happen.

Investing in deficit spending financed by increasing debt is supposed to bolster economic growth and inflation. As the pandemic fades, the economy and inflation will get a temporary boost. However, over longer time horizons, ballooning deficits made possible by rising debt lowers economic growth and is disinflationary. There’s no evidence to suggest that surging debt and deficits permanently improve economic trend growth rates. Yet, policymakers keep trying. It’s a vicious cycle.

However, the never-ending use of both fiscal and monetary policy may someday result in an unexpected spike in interest rates and inflation. In fact, rising rates and inflation expectations have spooked markets at the end of February. Unwanted increases in rates result in higher interest payments on debt and could derail the economy. For investors, rising rates and greater inflation could inflict pain on both stock and bond allocations.

Interestingly, markets have performed well over the last decade while economic growth has been underwhelming and wealth inequality increased. Policymakers have taken a number of steps during the pandemic to address the deficiencies from the GFC response, most notably an extraordinary increase in fiscal spending. In a strange twist of fate, perhaps the economy and wealth gaps will improve as a result, but the market will suffer from a commensurate rise in interest rates and inflation. Policymakers know that the stock market is an important barometer for business and consumer confidence, and they have been reluctant to let it fall too far. Could the times be changing?

GDP (Gross Domestic Product) The total value of goods produced and services provided in a country during one year.

Marketing Communication
The information provided does not constitute investment advice and it should not be relied on as such. It should not be considered a solicitation to buy or an offer to sell a security. It does not take into account any investor's particular investment objectives, strategies, tax status or investment horizon. You should consult your tax and financial advisor.

The views expressed in this material are the views of Michael Arone through the period ended February 24, 2021 and are subject to change based on market and other conditions. This document contains certain statements that may be deemed forward looking statements.

All material has been obtained from sources believed to be reliable. There is no representation or warranty as to the accuracy of the information and State Street shall have no liability for decisions based on such information.

Standard & Poor’s®, S&P® and SPDR® are registered trademarks of Standard & Poor’s Financial Services LLC (S&P); Dow Jones is a registered trademark of Dow Jones Trademark Holding LLC (Dow Jones); and these trademarks have been licensed for use by S&P Dow Jones Indices LLC (SPDJI) and sublicensed for certain purposes by State Street Corporation. State Street Corporation’s financial products are not sponsored, endorsed, sold or promoted by SPDJI, Dow Jones, S&P, their respective affiliates and third party licensors and none of such parties make any representation regarding the advisability of investing in such product(s) nor do they have any liability in relation thereto, including for any errors, omissions, or interruptions of any index.