With global markets navigating the impact of the coronavirus, volatility has stretched across virtually all asset markets, including gold. But analyzing some of gold’s historic patterns in the context of current market turbulence and dislocation, data suggests gold is likely playing an important role for investors, providing a potential valuable source of liquidity during extreme volatility and diversification that can help mitigate portfolio drawdowns.

In periods of crisis, conventional wisdom comes under even Investors tap liquidity during critical timesmore rigorous scrutiny than usual, but it is often exposed as myth. For example, some investors believe that when equities go down, the price of gold always goes up – but recent evidence clearly disputes that, as we have seen stocks and gold falling together this year. More recently, the Fed cut interest rates by 1.5% in the past couple of weeks; so many people expected gold to go up. Yet the initial response of the gold price was to fall a further 8%1 immediately after the first emergency rate cut on March 3.  Why? Investors are asking me why gold has not been soaring while equities and interest rates have been in freefall, so I think the issue is worth exploring.

Investors tap liquidity during critical times
Essentially, gold has been doing what it is supposed to do in this sort of environment. There was massive selling across all financial markets as the rapid spread of COVID-19 raised the specter of a global recession, and gold suffered along with everything else. Based on my discussions, investors indicated that they were selling anything they could to raise money, often to meet calls for additional cash when stocks they had purchased on margin plunged in value.

Judging by my conversations with them, many seasoned investors were taken completely by surprise by the simultaneous decline in gold. But this is not the first time we have encountered this sort of situation. As the economic problems that eventually became known as the Global Financial Crisis gradually emerged during the course of 2008, stocks sold off dramatically, as the chart below shows, and gold lost almost 30% of its value between March and November of that year ─ for exactly the same reasons as in the past few weeks. But gold quickly recovered, and the price increased 32% by the time stocks found their bottom on March 9, 2009. 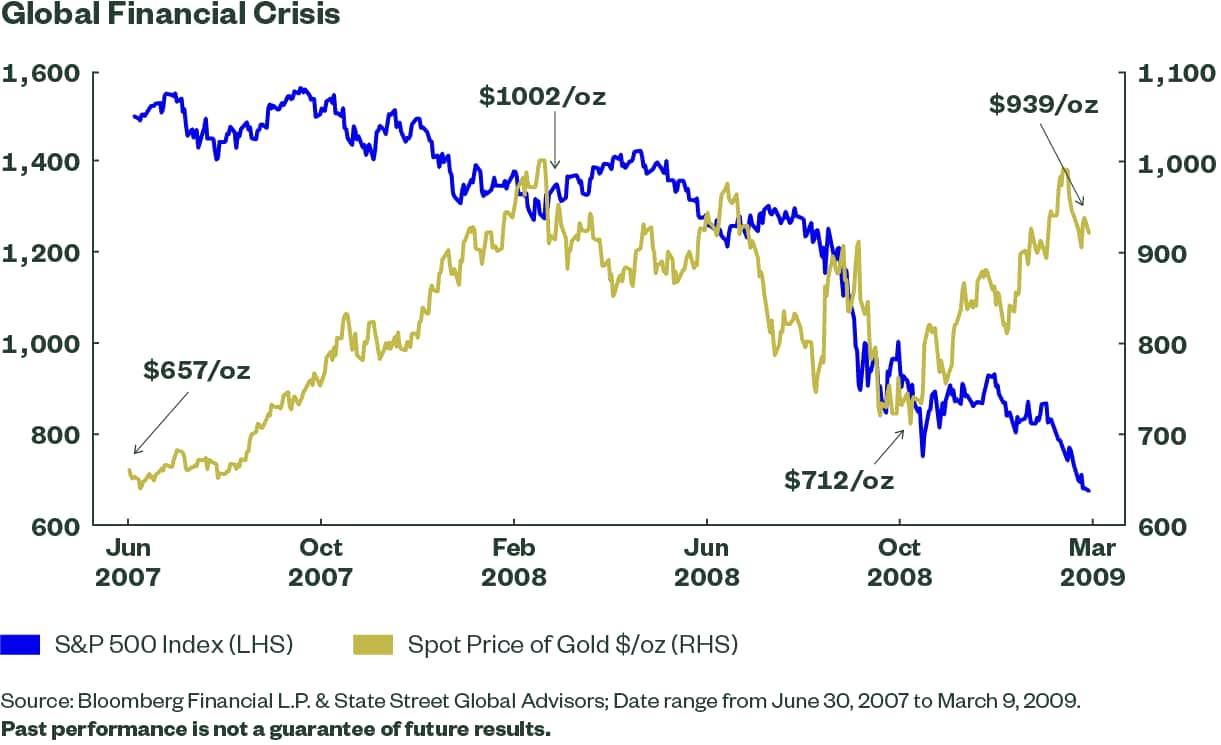 Similar things happened during the 2002 recession, and even further back in the aftermath of the 22% drop in equities on Black Monday in 1987. Equities took a big hit and remained at lower levels for months, while gold dipped initially on margin call liquidation but quickly regained its equilibrium and moved on to even-higher territory. 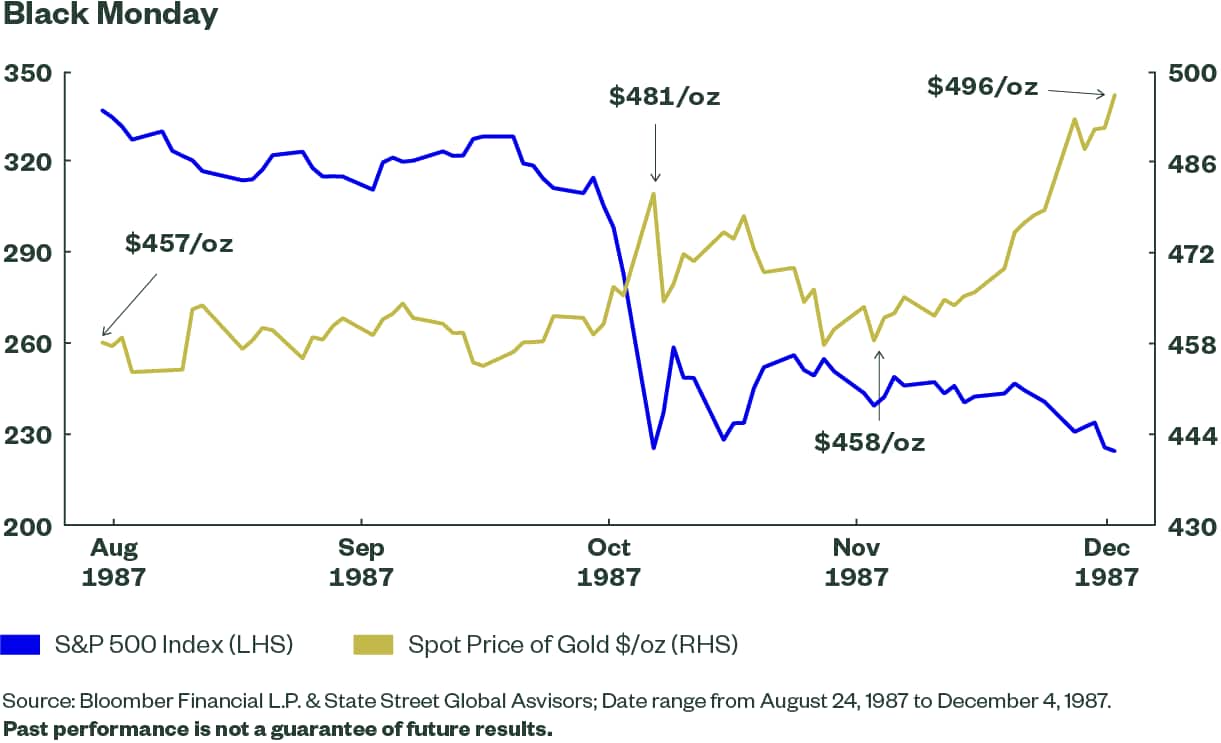 Index returns reflect capital gains and losses, income, and the reinvestment of dividends.

Understanding gold’s role in portfolio construction
What we are really seeing in all these examples is gold coming to the rescue of investors who were facing significant damage to many of the other components of their portfolios. Being in a position to sell some gold in order to meet margin calls meant that investors weren’t forced to part with their equities at depressed prices. In those circumstances, it is hardly surprising that the investors moved quickly to rebuild the gold allocations that had served them so well in a moment of crisis. It is also a testament to the liquidity of the gold market, as in all of these situations; investors were able to act rapidly to protect themselves. For those investors who do not buy stocks on margin ─ and who have a long-term strategy in place that focuses on regular rebalancing of a properly diversified portfolio, including a small allocation to gold ─ the chart below highlights how gold may potentially help to minimize portfolio drawdowns.

The Long View: Gold’s Strategic Value
It is worth pointing out that the importance of gold’s role as a store of value has steadily increased since the beginning of the free market for gold in the early 1970s. In fact, as the chart below shows, in each of the periods of crisis discussed above, the gold price was higher in the year after the crisis than it was during the year before the crisis began. I wouldn’t be surprised if a similar pattern emerged this time around.

Gold’s Historic Function in the Aftermath of Extremes
What does all this mean in terms of the outlook for gold? In the last Gold Nuggets, my bullish case for gold suggested a possible trading range for 2020 of between $1,450 and $1,700. We have already seen those levels approached during intraday trading, and we have not even reached the close of the first quarter. But consider this: those parameters were set long before the World Health Organization declared the outbreak a public health emergency of international concern on January 30, before the world learned of the first death from the virus on January 9, and even before the Chinese government first alerted the WHO to a mystery virus on December 31 of last year. No one could possibly have predicted the outbreak of a global pandemic with all its attendant disruption. But history suggests that at some point, the stock market will find a level where it can stabilize, and we will see the end of investors selling gold to raise cash to protect their other investments. If the experiences of 2008, 2002 and 1987 are any guide, gold will rapidly recover its equilibrium, and the price will move on to higher ground.

Gold Supply/Demand: What Can We Expect? How much higher can gold go?
A useful starting point toward an answer lies with a consideration of the potential impact of COVID-19 on gold’s internal market dynamics and the balance between supply and demand. The coronavirus has clearly distorted supply chains all over the world, and it will be no different in the gold market. Over the past decade, the world’s gold refineries produced an average of 3,200 tonnes of gold a year.2

On March 23, three of the largest refineries in the world announced that they were suspending production entirely for at least a week because of the virus. The refineries are all located in the Swiss canton of Ticino, which borders on Italy, and together they process around 1,500 tonnes of gold a year. These shutdowns will have a significant impact on supply, especially if they are extended beyond one week and are accompanied by similar action on the part of other refineries.

Turning to the demand side, we expect jewelry demand in the first half of the year to fall because of the devastating impact the virus has had on China and India, the two largest consumers of gold jewelry in the world. At the same time, we expect some offset to that decline in the form of rising global investment demand, due in part to the appeal of gold as a perceived safe haven3 during black swan events.

Longer term, we believe investment will also strengthen in response to the actions being taken by central banks throughout the world in an attempt to combat the economic disruption caused by the coronavirus. For example, the Fed implemented Quantitative Easing (QE) in December 2008 to help stabilize financial markets and mitigate the impact of the Global Financial Crisis. The Fed continued with QE until October 2014, and during this period, its balance sheet ultimately increased from $900 billion to $4.5 trillion. Over the same period, the spot price of gold rose, on average, 8% per year.4 The Fed announced unlimited QE on March 23 this year. If history is any guide, gold prices are likely to move higher. But how much higher will depend on the size and duration of the Fed’s new round of QE and how it serves to mitigate global investor anxiety and market volatility.

This material is for informational purposes only and does not constitute investment or tax advice and it should not be relied on as such. It should not be considered a solicitation to buy or an offer to sell a security. It does not take into account any investor’s particular investment objectives, strategies, tax status or investment horizon. There is no representation or warranty as to the current accuracy of, nor liability for, decisions based on such information.