Volatility, low rates, and rising risks supported gold’s price and investment demand in 2020, driving it to reach a new all-time high during the year. Read more below.

Despite some moderation on the volatility front post-election, the new year is looking poised to serve up more uncertainty for investors. See how George Milling-Stanley sees the gold market reacting, and what it may mean for gold’s price in 2021.

The COVID-19 pandemic has dominated the headlines in 2020 as the driver primarily responsible for pushing gold to its all-time high of $2,067.15 an ounce on August 6.1 But growing uncertainties and risks — both economic and geopolitical — along with lower for longer interest rates, have also been major contributors to the strength and momentum of gold’s price this year. Evidenced by positive gold ETF inflows during 2020,2 gold provided many investors with valuable portfolio diversification, helping them to navigate volatile markets and liquidity needs. Despite some positives emerging recently, the year ahead looks as though it may offer up more opportunities for gold to play a potentially important strategic role in investors’ portfolios to help position for the highly changeable landscape on the horizon.

That said, the final resolution and victory of the Biden-Harris Democratic ticket in the US presidential election removed one important element from the cloak of uncertainty that investors have been dealing with for most of 2020. Simultaneously, progress on the vaccine front from three pharmaceutical companies spurred some renewed risk-on sentiment from investors as the positive news helped break down some of the ambiguities relating to the pandemic and its future course. But is this enough relief for investors? How will asset markets respond to the remaining risks, and how will the “next normal” be defined?

Ahead of the election, some speculators took long positions in gold, fearing that the widely predicted blue wave — which would have given the Democrats control of the Presidency, the Senate and the House of Representatives — would open the door to a highly progressive agenda. These preemptive actions taken by some investors to protect their portfolios before the election added $1.4 billion to global gold-backed ETFs in October, bringing year-to-date total gold ETF inflows at the end of October to $57.1 billion.3

In contrast, as positive news of a COVID-19 vaccine mounted and election results unfolded, the unexpected weakening of the Democrats’ hold over the House — coupled with the possibility that one, or both, of the January runoff elections for the two open Senate seats in Georgia could cement continued Republican control of the Senate — led to the liquidation of $6.8 billion of global gold-backed ETFs in November.4 Post-election gold ETF outflows represent the second-worst month ever for outflows, surpassed only by April 2013’s $8 billion.5 As shown in the chart below, that change in market sentiment triggered the gold price to briefly dip below the $1,800 level toward the end of November.

Many uncertainties are hanging on during the remaining days of the lame duck session, quite possibly enough to sustain gold prices, and even potentially drive gold higher again. Remember, it was the general climate of political and economic uncertainty back in the summer of 2019 that drove the gold price up through the upper bound of a trading range that had been in force for the previous six years, functionally capping the price at around the $1,350 level for the period. As illustrated below, gold moved above $1,600/oz. during February 2020, before anyone had any inkling of the global lockdowns and the ensuing damage to countries’ economies that was yet to come. 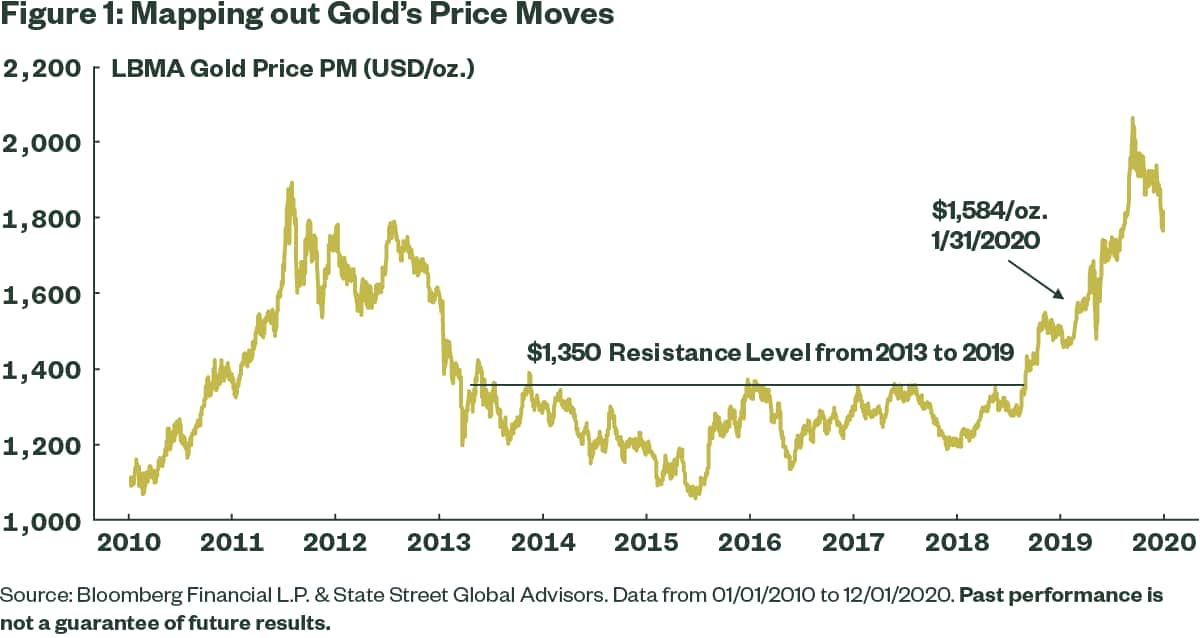 In addition, the incoming Biden administration has promised to focus on four main priorities. Clearly, tackling the COVID-19 pandemic and economic stimulus focused on infrastructure stand front and center. But the administration has also committed to urgent action on health care reform and climate change. Tackling all of these issues simultaneously would likely prove expensive, potentially leading to higher deficits, a depreciating US dollar, and even the fear of a spike in inflation. 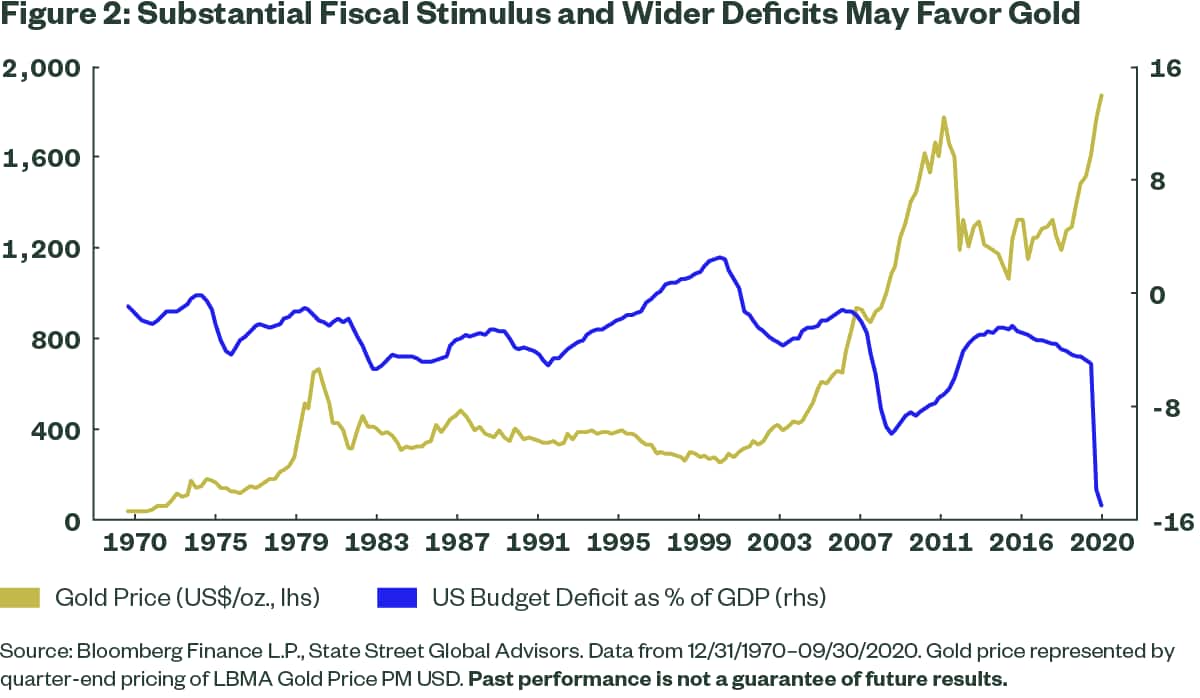 Setting the Stage for Gold with the Changeable Global Road Ahead

The Biden administration is certainly not starting from a position of strength: COVID-19 continues to set new records for infections and deaths almost daily, leading to the threat of major lockdowns in the Southwest and possibly a resumed lockdown in the Northeast. Will our hopes for the vaccine be fulfilled? Are supplies adequate, and will the producers be able to overcome the undoubted difficulties of distribution in order to lead quickly to herd immunity? Pandemic-related uncertainty still looms large.

Beyond that, the economy is still not what one might call booming, despite some encouraging statistics for Q3. A second wave of lockdowns could provide solid disruption to any positive course, potentially even triggering a double-dip recession. In fact, Moody’s Analytics has predicted a decline into recession in Q1 and Q2 2021, with unemployment rising from 6.9% currently to 10% by next summer.6 This would likely bring renewed volatility to financial markets, perhaps even prompting a second downward leg in equities. Interest rates are expected to remain at or close to zero for at least the next couple of years, with investors speculating about the possibility of the Fed going negative or under yield curve control. The implications of a continued low interest rate environment are likely positive for gold, with global negative yielding debt rising to all-time highs7 and further diminishing gold’s opportunity cost relative to lower yielding fixed income assets.

Trade and social issues will also stay at the forefront of the new administration’s agenda, and given the uncertain economic situation, government spending seems likely to increase. The selection of Janet Yellen as Treasury Secretary and the continued presence of Jerome Powell at the Fed puts two people not known as deficit hawks in very powerful positions.

With all this uncertainty in mind heading into the new year, I offer three hypothetical scenarios and outlooks for gold in 2021 below — suggesting the trading ranges for the gold price, a potential probability for each, and an analysis of the factors that could trigger the respective scenarios. Remember, these suggested hypothetical prices represent possible trading ranges for gold prices, not forecasts for year-end prices.

What needs to happen for this bear case scenario to occur? This hypothetical scenario assumes a sudden reversal of many current positive trends in China and the rest of the emerging markets, with these players encountering additional major challenges in reopening their economies. There could be substantial renewed outbreaks of COVID-19, and countries in the region could be faced with persistent strict nationwide lockdowns. The nascent economic recovery currently forming in emerging markets would stall, and there would be no rebound in emerging market demand for gold jewelry.

By contrast, in the US and Western Europe, the pace of development of safe and effective vaccines may accelerate, and effective distribution mechanisms could be developed. These vaccines could rapidly become widely available in the industrialized world, leading to the swift emergence of herd immunity. These regions could be in a position to reverse recent lockdowns and reopen, and economic activity would rebound. With a faster-than-expected economic recovery in the developed countries, equity markets would likely soar to fresh all-time highs, and we could see aggressive steepening of the yield curve, coupled with renewed strength in the US dollar.

Under this bear scenario, gold prices could fall from current levels due to dwindling safe-haven and investment demand in the West, and no recovery in jewelry demand in Asia and other emerging markets. With a return to solid gains in GDP growth in the West, there could be some compensation for the likely decline in gold investment if jewelry demand in the region begins to recover, but without strong buying in the emerging markets, global jewelry would likely remain well below normal levels, keeping gold prices lower.

What needs to happen for this base case scenario to occur? This hypothetical scenario assumes little change from the current circumstances. The pace of economic recovery in the emerging markets would remain slow, with widespread prosperity proving elusive, and collectively, suppressing any significant rebound in gold jewelry demand. Emerging market central banks could begin reversing their decade long buying trend and slow their net purchases of gold for official reserves as they begin to lose confidence in their view that further US dollar depreciation is inevitable.

In the US and Western Europe, the impact on the spread of the virus as a result of recent lockdowns and mask mandates remains patchy. A recent Pew Research8 poll suggested that almost half of Americans surveyed would not get vaccinated immediately, even if supplies were available. That raises the possibility that there might be no rapid development of herd immunity as a result of the introduction of vaccines.

Therefore, the economic recovery in the industrialized world that began in Q3 2020 would continue but remains slow, so there would be no significant growth in gold jewelry demand. With progress toward economic recovery remaining slow, the US dollar could stay flat to perhaps somewhat lower. Real yields would likely stay negative as inflation — higher yet benign — exceeds any rise in nominal yields. There are, however, enough encouraging signs of impending economic recovery that safe-haven investment demand for gold may suffer.

What needs to happen for this bull case scenario to occur? This hypothetical scenario assumes continued unevenness in reopening of economies throughout the world. A continuation of current positive trends in the emerging markets could see a powerful recovery in economic activity in those regions, with China leading the way. The resulting rapid return to prosperity could lead to a significant rebound in jewelry demand. In addition, emerging market central banks may resume their decade-long trend of strong net purchases of gold after slipping briefly into net sales in Q3 2020. That unexpected development primarily came about as a result of one emerging market outlier — Uzbekistan — reducing its exposure to gold from two-thirds to approximately 50% of its total official reserves.9

In the US and Western Europe, this scenario assumes continued problems and delays in reopening economies as a consequence of growing virus cases and renewed widespread lockdowns, placing additional pressure on these already delicate economies. For the US specifically, the four main priorities of the incoming Biden administration – more effective tackling of the COVID-19 pandemic, economic stimulus focusing on infrastructure to fulfill the “build back better” campaign promise, health care for all, and aggressive action to combat climate change — are all seen as likely to lead to higher deficits, generating dollar depreciation and fears of rapidly rising inflation. This scenario could lead to continued strong demand for gold as a perceived defensive investment.

Expectations for the Post-Election World and the Outlook for 2021

At the time of this writing, there seems little chance of the bear case scenario coming to pass. Right now, the global situation seems poised somewhere between the base and bull case scenarios. The one condition that seems likely to be a given as we move toward some level of economic recovery — while at the same time, treading the difficult evolutionary path toward whatever the “next normal” turns out to look like — is an elevated level of volatility across all financial markets. Gold’s diversification properties may help investors seeking to preserve value in their portfolios during that difficult navigation ahead.

Bottom line, based on the probability ratings above, it seems that there may be more potential upside than downside factors stacking up for gold in the new year. Interesting times certainly lie ahead.