Gold Strategist, Robin Tsui, answers 5 key questions on Gold, including the impact of the US dollar, inflation, and outlook.

The dollar and gold historically have often moved in opposite directions, but not symmetrically, in part because there are other factors that may drive the gold price.

There are various reasons why the asymmetry between gold and the dollar has existed. We believe that two of those reasons stand out. First, gold can be described as one of the multiple currencies that exist in the monetary system, as its strategic use by central banks in their foreign reserves. The link between gold and the dollar should not be seen in isolation, but in relationship to other currencies as well. Second, while important, the dollar is just one of the many drivers that may influence gold, and that complexity can alter the negative correlation between the two.

In periods of uncertainty, the dollar historically has often benefited from flight-to-quality flows. But so has gold. Investors have seen both the dollar and price of gold increase in recent periods of uncertainty, including during the 2008-2009 global financial crisis, the 2010-2011 European sovereign debt crisis and in the aftermath of the UK referendum to leave the European Union in June 2016. In contrast, weak-dollar periods have often historically coincided with other factors that may be supportive of gold. For example, falling interest rates, growth in emerging markets, or higher inflation expectations1.

In summary, it may thus be intuitive to see why the historically asymmetric relationship between gold and the dollar has the potential to work in gold's favor. While a strengthening US dollar has historically correlated to a weakening gold price, there have been periods in the past when both prices increased at the same time.

We believe that gold is an effective portfolio diversifier, and that investors may wish to consider maintaining their gold allocations even when the dollar is rising.

In addition, the price of gold has been influenced historically by real rates of return. For instance, gold has appreciated at times when real returns (calculated by subtracting the US core consumer price index (excluding food and energy) from the yield of US 10-year Treasury notes) on assets like bonds have been low3. The disinflationary trend over the past 35-plus years and the low-to-negative real rates around the world that still prevail have historically been favorable to the price of gold.

It is important to note that historically, it is the real interest rate, rather than nominal rate, that appears to have been the more predominant driver of gold6. We expect global real interest rates to remain in fairly low in the near term and we expect this would continue to benefit gold as an non-yielding asset because a low real interest rate environment would potentially lower the opportunity cost of holding gold, making gold a more attractive investment.

We expect the Fed to adopt a gradual path of interest rate rises in the near term and any upside surprises to inflation (a key indicator for the Fed when deciding to raise rates) should keep real interest rates low relative to historical levels.

Gold is trading below the US$1,900/oz peak level reached in September 2011, so the gold price is not anywhere close to its prior peak. We may potentially see more upside potential than downside risk for gold due to the ongoing geopolitical uncertainty, stretched valuations in equity markets and the current low real interest rate environment. Since the start of 2016, as a result of heightened geopolitical risks, increase in stock market valuations, rising number of shocked events such as the Brexit and Trump’s presidential victory, gold is increasingly becoming an important strategic allocation in an investor portfolio to hedge against unexpected risk.

Gold has traded within a range between US$1,150 and US$1,350 an ounce since the third quarter of 2013. There have been occasional moves outside these parameters, but they have not been sustained. Today's price is at the midpoint of this trading range, and the possibility of another test of the overhead resistance in the area around US$1,350 may represent a potential tactical opportunity. 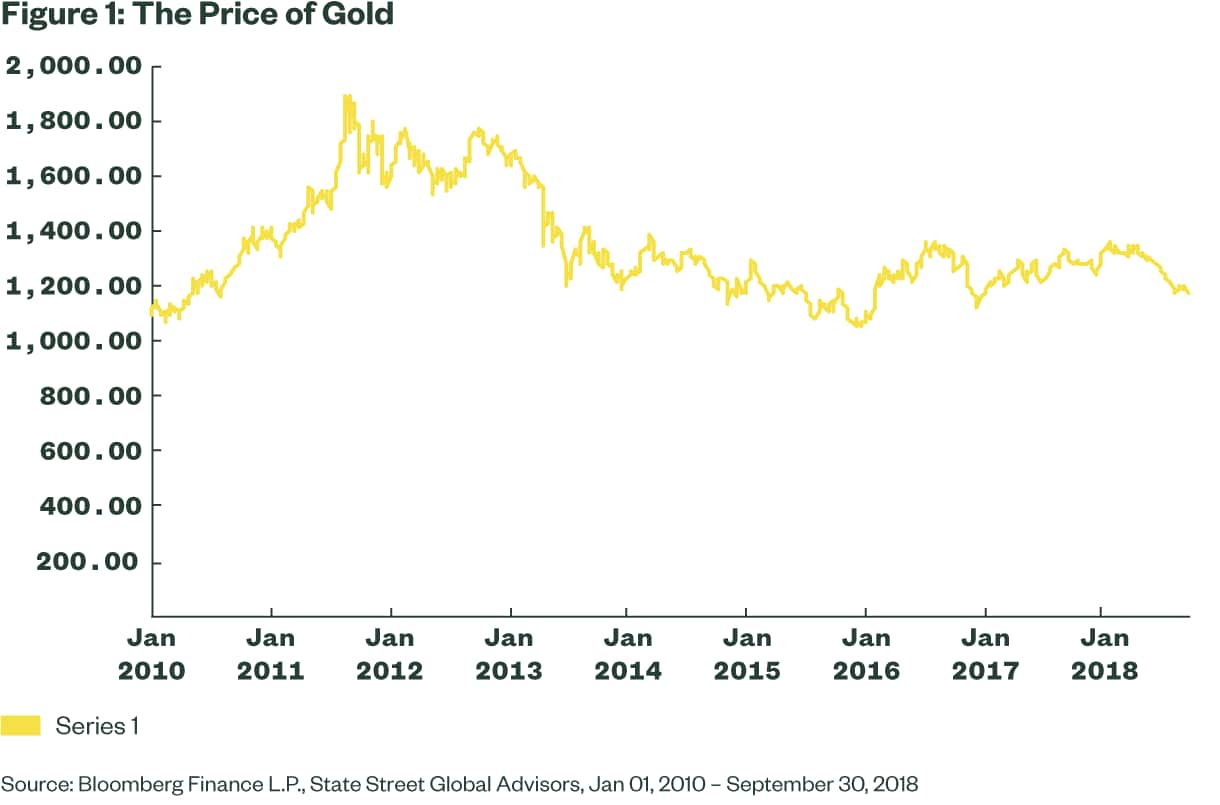 Gold ranks around the mid-range in terms of volatility when gold price is compared with various stock and bond indices during the past 10 years.7 Gold’s low historical correlation to other asset classes can potentially play an integral role in a diversified portfolio. The expanding universe of investable asset classes and the relative ease of shifting across different assets means today’s typical multi-asset fund looks a lot different than “balanced” stock-and-bond funds of the past. Since the global financial crisis, which was characterized by an extended period of low interest rates, we believe the benefits of holding a truly diversified multi-asset portfolio have become clear. Gold, a unique asset class that has historically low or negative correlation with many other asset classes8, is one of those assets that is finding its way into many multi-asset strategies. Gold has historically been used by many portfolio managers to potentially counter volatility, especially in periods of uncertainty. We believe gold should be considered a core diversifying asset and that investors may wish to consider having a long-term strategic presence in multi-asset portfolios.

In our research paper “The Role of Gold in Today’s Global Multi-Asset Portfolio”, we examined the results of adding a 2%, 5% and 10% of SPDR Gold Shares (GLD) into a multi-asset portfolio and saw in our case study that adding a 2% to 10% strategic asset allocation to GLD in a hypothetical multi-asset portfolio between January 1, 2005 and September 30, 2018 would have improved risk-adjusted return and reduced maximum drawdown compared to the portfolio without any exposure to gold-backed investments.

The whole or any part of this work may not be reproduced, copied or transmitted or any of its contents disclosed to third parties without State Street Global Advisors' express written consent. Commodities and commodity-index linked securities may be affected by changes in overall market movements, changes in interest rates, and other factors such as weather, disease, embargoes, or political and regulatory developments, as well as trading activity of speculators and arbitrageurs in the underlying commodities. Currency exchange rates between the U.S. dollar and non-U.S. currencies may fluctuate significantly over short periods of time and may cause the value of investments to decline. Frequent trading of ETFs could significantly increase commissions and other costs such that they may offset any savings from low fees or costs. Diversification does not ensure a profit or guarantee against loss. Investing in commodities entails significant risk and is not appropriate for all investors. There can be no assurance that a liquid market will be maintained for ETF shares.  All material has been obtained from sources believed to be reliable. There is no representation or warranty as to the accuracy of the information and State Street shall have no liability for decisions based on such information. The World Gold Council's name and logo are a registered trademark and used with the permission of the World Gold Council pursuant to a license agreement. The World Gold Council is not responsible for the content of, and is not liable for the use of or reliance on, this material.