Most central banks, including the Fed, the BoJ and the ECB, continue to emphasize downside risks to the economic outlook. The BoC’s more upbeat stance remains an exception so far. We discuss central banks’ rationale for the cautious stance.

The US Federal Reserve (Fed), the European Central Bank (ECB) and the Bank of Japan (BoJ) reiterated that there are persistent risks to the economic outlook at their respective April meetings. All of them extended their current, highly accommodative monetary policy stance and pledged to continue to do so for a while yet. The Bank of Canada (BoC) remains the exception, having announced the tapering of asset purchases at its last meeting, implicitly outlining a timeline for rate hikes in the latter part of 2022.

A Three-Layered Argument For Persistent Accommodation

While each central bank has specific domestic considerations informing its views, the pro-accommodation arguments could be grouped into three main buckets. The first two are broadly shared, whereas the latter is most relevant for the Fed.

The first argument in favor of persistent accommodation is merely “stating the obvious”: the pandemic is far from over. With global cases hitting record numbers amid surges in India, Brazil and many other countries, the risks of variant spread and renewed case resurgences remain a real threat. This is true even in countries such the United Kingdom or the United States (US) that are well on their way toward achieving herd immunity. Until COVID-19 is fully behind us – not only in a few countries but globally – an elevated level of policy accommodation remains warranted.

The second argument has to do with the degree of retracement of COVID-19 related losses across a range of macroeconomic indicators. This retracement argument must be understood in a broad sense. It is not merely a matter of attaining pre-pandemic levels of GDP, which the US, for instance, is poised to achieve this quarter (Q2, 2021). Neither is it merely about bringing the headline unemployment rate down to the pre-crisis level. Rather, it is a matter of achieving a full labor market recovery, reducing underemployment and ensuring that those displaced during the crisis do not remain out of the labor force permanently. When looked through this broader lens, much remains to be done to get us back to the health levels of the pre-pandemic labor market.

Figure 1 illustrates considerable differences across countries with Australia and Canada leading the race toward achieving a full labor market recovery but the US still having a long way to go. Let us consider, for example, the extent of recovery in employment where Canada has already retraced 90% of its employment losses but the US has recouped only about 65%. This divergence alone goes a long way in explaining the more upbeat message from the BoC versus the Fed’s own view that it is not yet time to talk about tapering, let alone initiating it. The recovery must also extend to inflation, where, despite a meaningful burst higher, the medium-term trajectories remain uncertain. 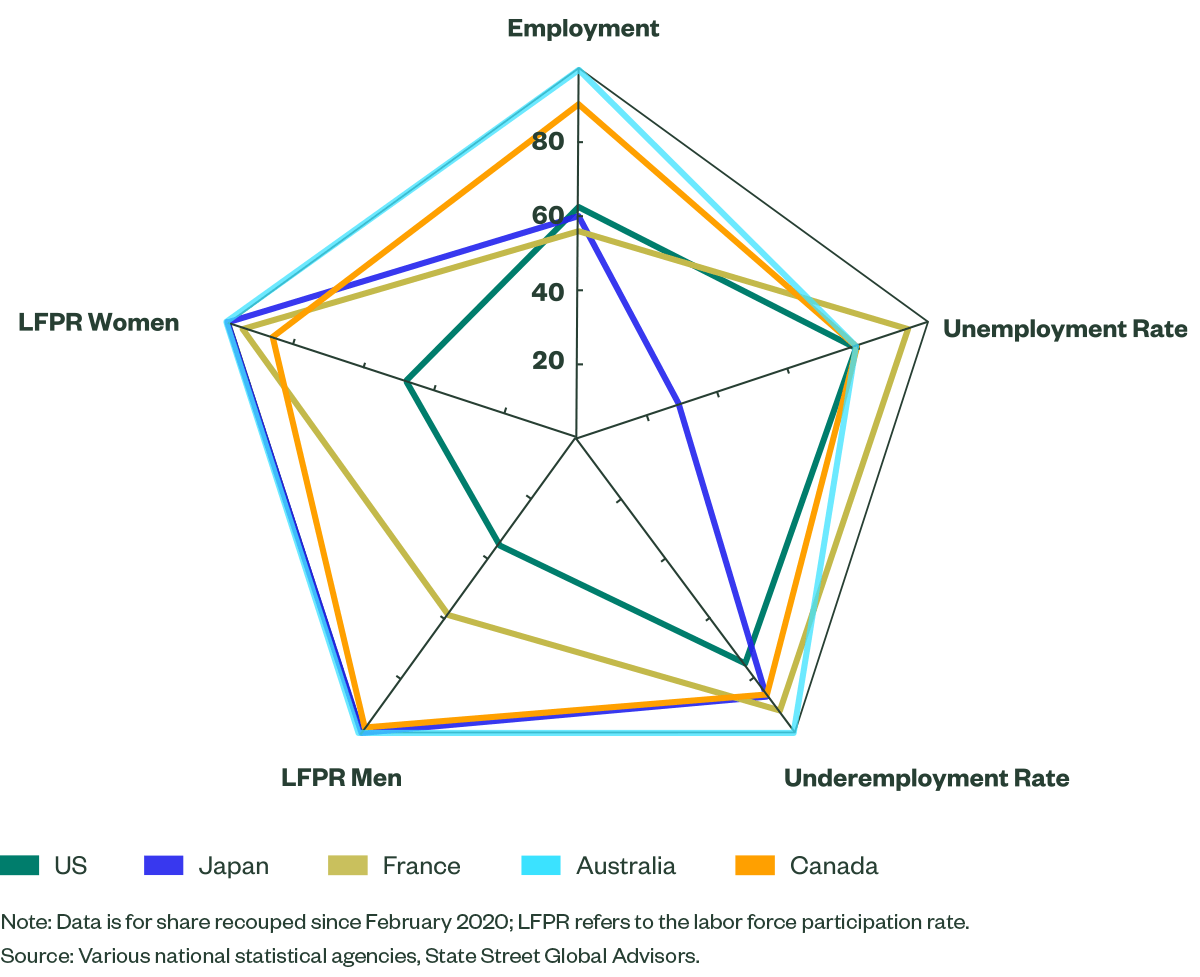 The third argument, which we believe is most relevant for the Fed, has to do with what we would describe as a “distance from frontier” type of reasoning. The Fed is the only central bank so far to have formally adopted the average inflation targeting framework (AIT). As a result, it has embraced a new reaction function where policy changes are driven by actual, rather than anticipated, macro outcomes.

In doing so, the central bank has shed the pre-emptive nature of its policy actions and is now intent on determining the economy’s sustainable equilibrium in an experiential manner. More than any other central bank, the Fed also operates in an environment where issues of equity of outcome are at the forefront of the broad social and macro policy discussion. In short, the process is not just about finding out “how low can the unemployment rate go” but of “how strong and equitable can the labor market become” without endangering the inflation mandate.

This is why the Fed’s intentions seem to extend not just to getting back to the pre-pandemic level of performance but achieving something more akin to “best in class” outcomes. Figure 2 illustrates the idea: in respect to the female labor force participation, the “stretch” goal would go well beyond getting back to the 2019 level, for instance. 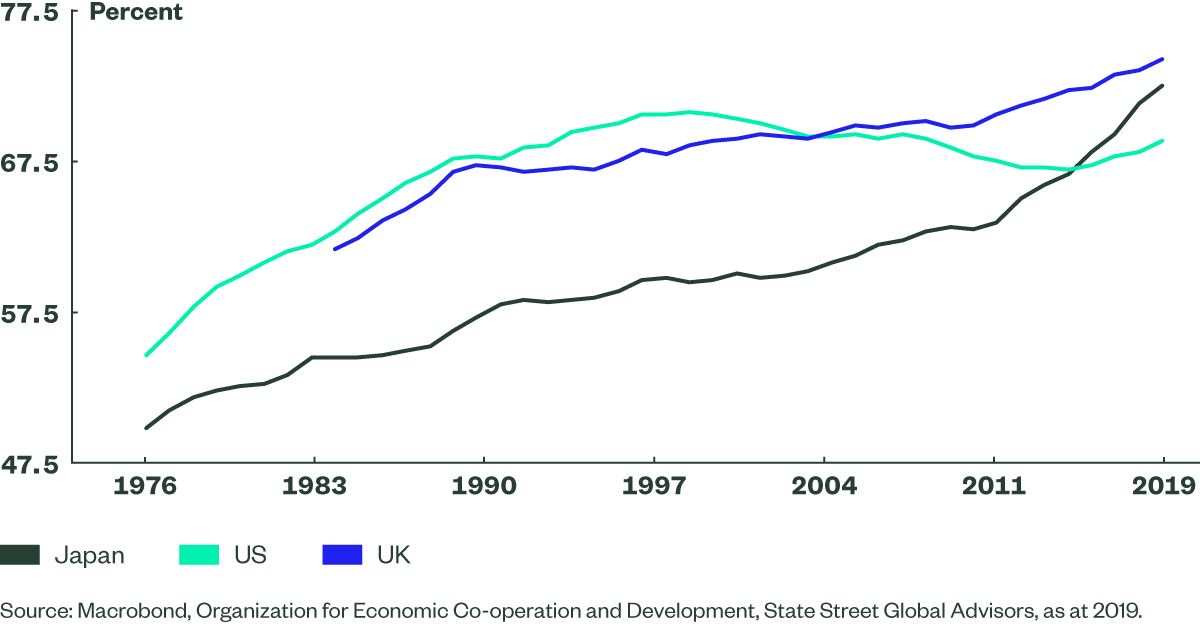 A Common-Sense Approach: Monitoring the Outcomes

Central banks’ ongoing emphasis on downside risks to the recovery remains a reasonable approach for the time being. Even so, we expect that assessment to shift dramatically over the next six months as the vaccine rollout accelerates globally and substantial further progress is made toward retracing pandemic-related losses.

Given the AIT framework and a new interest in attempting to experientially determine the labor market’s “potential possibilities frontier”, the Fed will not be the one leading this shift – this much is already obvious. But neither is it likely to close the rear, so to speak, given its own forecasts of rapid growth and speedy labor market improvements. The moment for the Fed to talk about QE tapering is not yet at hand, but it is not too far out in the future either.

The views expressed in this material are the views of the Global Macro Policy Research team through 05 May 2021 and are subject to change based on market and other conditions. This document contains certain statements that may be deemed forward looking statements. Please note that any such statements are not guarantees of any future performance and actual results or developments may differ materially from those projected.