Short- and long-term factors are holding dollar, sterling and euro policy rates near or below zero. We expect this to endure for the medium term, and possibly longer. As such, central banks will resort to quantitative easing to conduct monetary policy.

Sterling Amid pressure from Brexit and COVID-19, the Bank of England (BOE) has raised the possibility of setting the Bank Rate below zero, but has signaled that it would prefer to hold steady at 0.1%. Already, the sovereign yield curve is negative out to five years.

Euros We expect the European Central Bank (ECB) to hold rates at -0.5% throughout 2021 and to continue quantitative easing at least until the pandemic ends.

Dollars In accordance with the new policy announced in the third quarter of 2020, the Federal Reserve (Fed) is likely to hold rates near 0.0% in 2021 and beyond, although strong post-pandemic growth could push 10-year Treasury yields to 1.5% by year’s end. 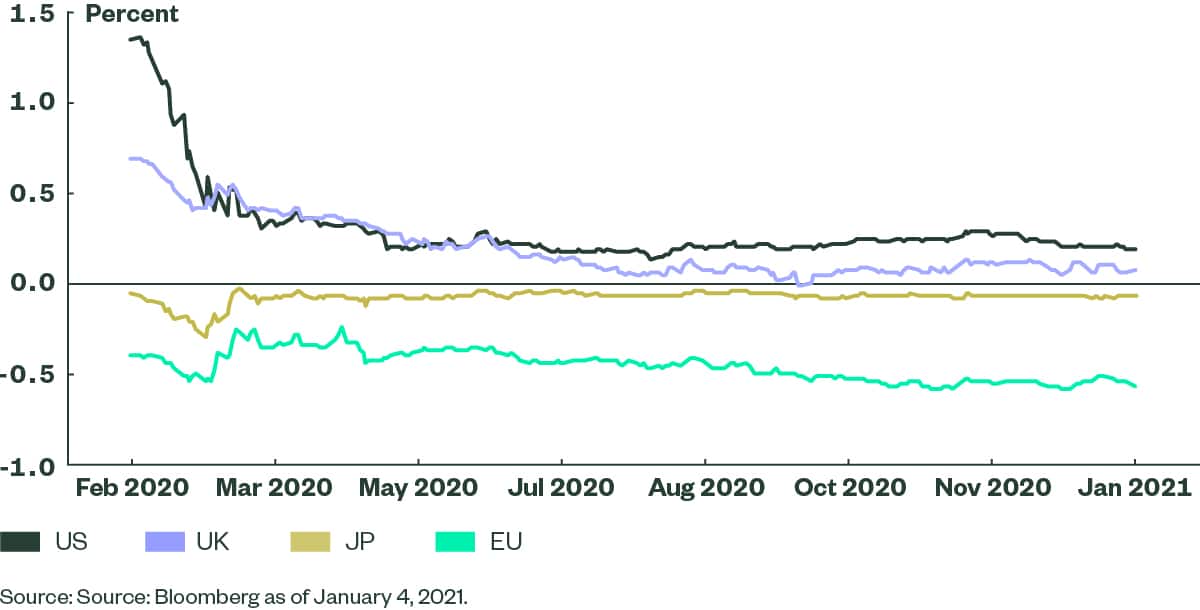 As sovereign yields converge to zero and monetary policy rates are pinned at or below zero, central banks have only one option: quantitative easing. 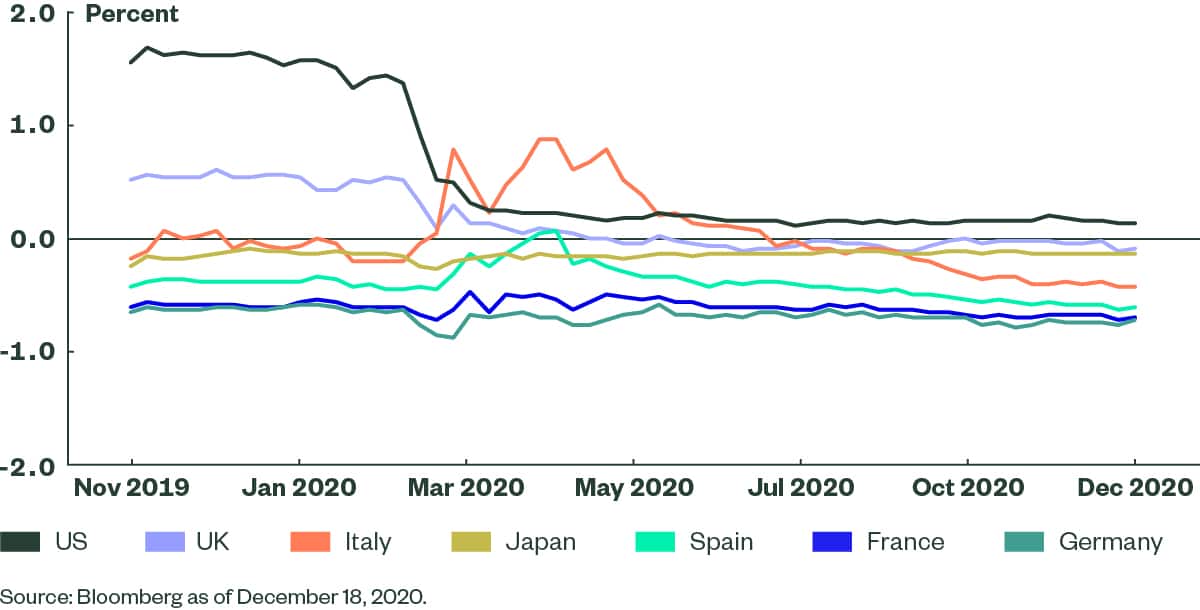 Sterling
At the BOE’s December meeting, all nine Monetary Policy Committee (MPC) members voted to hold interest rates at 0.1% and the quantitative easing target at £895 billion. The policy was based on positive vaccine news and the assumption of a Brexit deal. Recognizing ongoing challenges to businesses, the MPC also extended availability of its term funding scheme (TFSME1) for six months until October 31, 2021. Inflation fell sharply from 0.7% in October to 0.3% in November. This was driven in part by temporary factors, so we still expect inflation to rise temporarily back toward 2% in 2021 and 1.5% in 2022.

In 2020, for the first time, the BOE considered the possibility of negative interest rate policy (NIRP) and stands ready to deploy it if required in 2021. The BOE has asked banks if they are ready for a zero or negative Bank Rate, and is clearly prepared to drop the rate if needed. At least two BOE policymakers have gone on record in support of negative rates if the economy deteriorates. Most recently, BOE Monetary Policy Committee member Gertjan Vlieghe told Bloomberg, “The risk [a negative rate] ends up being counterproductive is low, and therefore if we find ourselves in circumstances where we need more stimulus, that would be a risk I’m willing to take.” Like fellow policymaker Michael Saunders, Vlieghe said, “Stimulus, if needed, would likely require a combination of negative rates and more asset purchases”.2

On balance, however, policymakers have signaled that they would prefer to hold steady.3 Whether the BOE sets its rate negative will largely depend on the future economic impact of the pandemic and Brexit. If it does, we would expect the moves to be gradual and not exceed the rate set by the European Central Bank (ECB). Yields for GILTS (UK sovereign debt) are already negative out to ﬁve years. For sterling-based money market funds, positive yielding credit assets have largely been unavailable without reaching further down in credit quality.

Euros
The ECB is almost certain to keep its policy interest rate at the current -0.5% level throughout 2021, and to continue quantitative easing at least until the pandemic is under control. Under the ECB’s Pandemic Emergency Purchase Program (PEPP), €850 billion in asset purchases were initially authorized in March 2020; that figure grew to €1.85 trillion in December and additionally was extended until the end of March 2022.4 The ECB has also extended its TLTRO-III (targeted long term repo operations) until June 2022. With a rate as low as -1% these operations are very favorable for banks and we expect to see an increase in demand at the four operations in 2021.

Various factors are cementing the trend of slow growth and low inflation in Europe. These include a declining birthrate, an aging population, restrictive labor laws, low-wage labor in Eastern Europe, and a need for structural reforms. As such, we foresee negative interest rates, in place since 2014, persisting for years to come.

In March 2020, as the pandemic began to seriously impact the global economy, the Federal Open Market Committee (FOMC) slashed its target interest range by 1.5 percentage points, to 0.0%–0.25%. In all likelihood the rate will remain at that level for years, largely due to an August 2020 policy change.5 Also, similar to other central banks around the world, the Fed has dramatically increased the size of its balance sheet, by more than $3 trillion.

And as the below chart shows, the market is telling us the Fed has no plans to raise rates anytime in the near future.

Despite the Fed’s dual mandate to maintain stable prices and boost employment, for the past four decades it has primarily focused on fighting inflation, raising interest rates when the unemployment rate was 50 basis points (bps) above NAIRU.6 (Previously it had tolerated a higher level of inflation, raising rates when unemployment was 50bps below NAIRU.) The Fed’s hawkishness made sense in the late 1970s and early 1980s when personal consumption expenditures (PCE) were spiraling upward. Yet since the 1980s the Fed’s rate hikes have choked off employment growth, while inflation has declined as a concern, exceeding 2% in only 9% of all months since 1996. This is largely due to secular factors independent of monetary policy, such as inexpensive labor from the emerging markets, a decline in union membership, and the baby boomer shift from spenders to savers.

To adjust for this, in August the Fed unveiled a new Flexible Average Inflation Target (FAIT), under which its goal is 2% average inflation over time. Under FAIT, rather than raising rates preemptively to keep inflation under 2%, inflation will be allowed to drift moderately above 2% following periods of undershooting.

A low federal funds target range should not be mistaken as a sign of poor economic growth. Indeed, economists believe that growth will be strong in 2021 and 2022, estimated at 4% by some. As the pandemic subsides, employment growth will likely be strong, with unemployment eventually moving below 4% and possibly even below 3%. Inflation may surge in the near-term due to an expected “revenge spend” after the population has been vaccinated, but we believe prices will revert to low levels once normal spending patterns resume.

Despite the Fed’s low interest rate range, we expect the yield curve to steepen over time. Economic growth will exert upward pressure on interest rates, with the 10-year Treasury potentially reaching 1.50% by the end of 2021. As the economy improves, the markets will begin pricing in monetary tightening, including the expiration of the Fed’s COVID-era extraordinary measures, asset-purchase tapering, and eventual rate hikes. The Fed is currently buying $80 billion in Treasuries and $40 billion in mortgage bonds each month, and is committed to continuing these purchases until “substantial further progress has been made toward the [FOMC’s] maximum employment and price stability goals.”7 A Fed announcement on tapering of quantitative easing will put upward pressure on longer- term rates. As long the increase is gradual the Fed will likely proceed with tapering.

A risk to our outlook is that premature monetary or fiscal tightening could slow the recovery. We believe that the risk for monetary tightening is remote given the lessons central banks learned from the euro crisis and taper tantrum. With public debt skyrocketing, fiscal tightening is a greater risk, although the timing and severity are uncertain. Our Credit Research Team is watching these factors closely.

The prospect of persistently low interest rates in the US, UK and EU signal that a new age of monetary policy has arrived. During crises, central banks will be less able to intercede immediately by dropping interest rates. Instead, quantitative easing will become even more central to monetary policy in the years ahead. Overall, we believe central banks will continue to review, analyze, and update their monetary policy frameworks, as the Fed did this past summer. Ultimately central bank policy changes will support their individual mandates and lead to growth, employment, and financial stability.

The information provided does not constitute investment advice and it should not be relied on as such. It should not be considered a solicitation to buy or an offer to sell a security.

It does not take into account any investor’s particular investment objectives, strategies, tax status or investment horizon. You should consult your tax and financial advisor. All material has been obtained from sources believed to be reliable. There is no representation or warranty as to the accuracy of the information and State Street shall have no liability for decisions based on such information.

This document may contain certain statements deemed to be forward-looking statements.

Please note that any such statements are not guarantees of any future performance and that actual results or developments may differ materially from those projected in the forward looking statements.