Investor Sentiment: What, Me Worry?

State Street Global Markets builds indicators of aggregated long-term investor behavior in fixed income markets from a substantial subset of $10 trillion worth of fixed income assets under custody and administration at State Street.1

This captures behavioral trends across tens of thousands of portfolios and is estimated to capture just over 10 percent of outstanding fixed income securities globally. 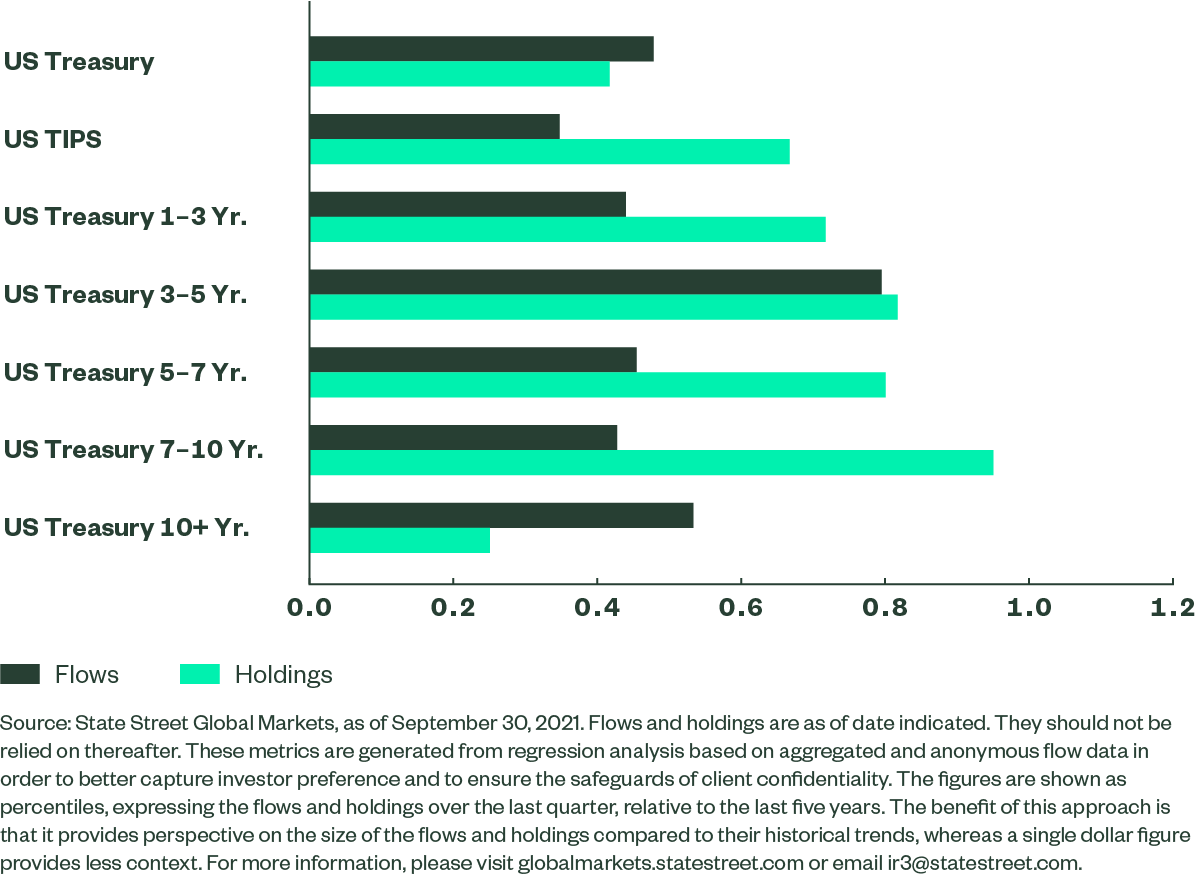 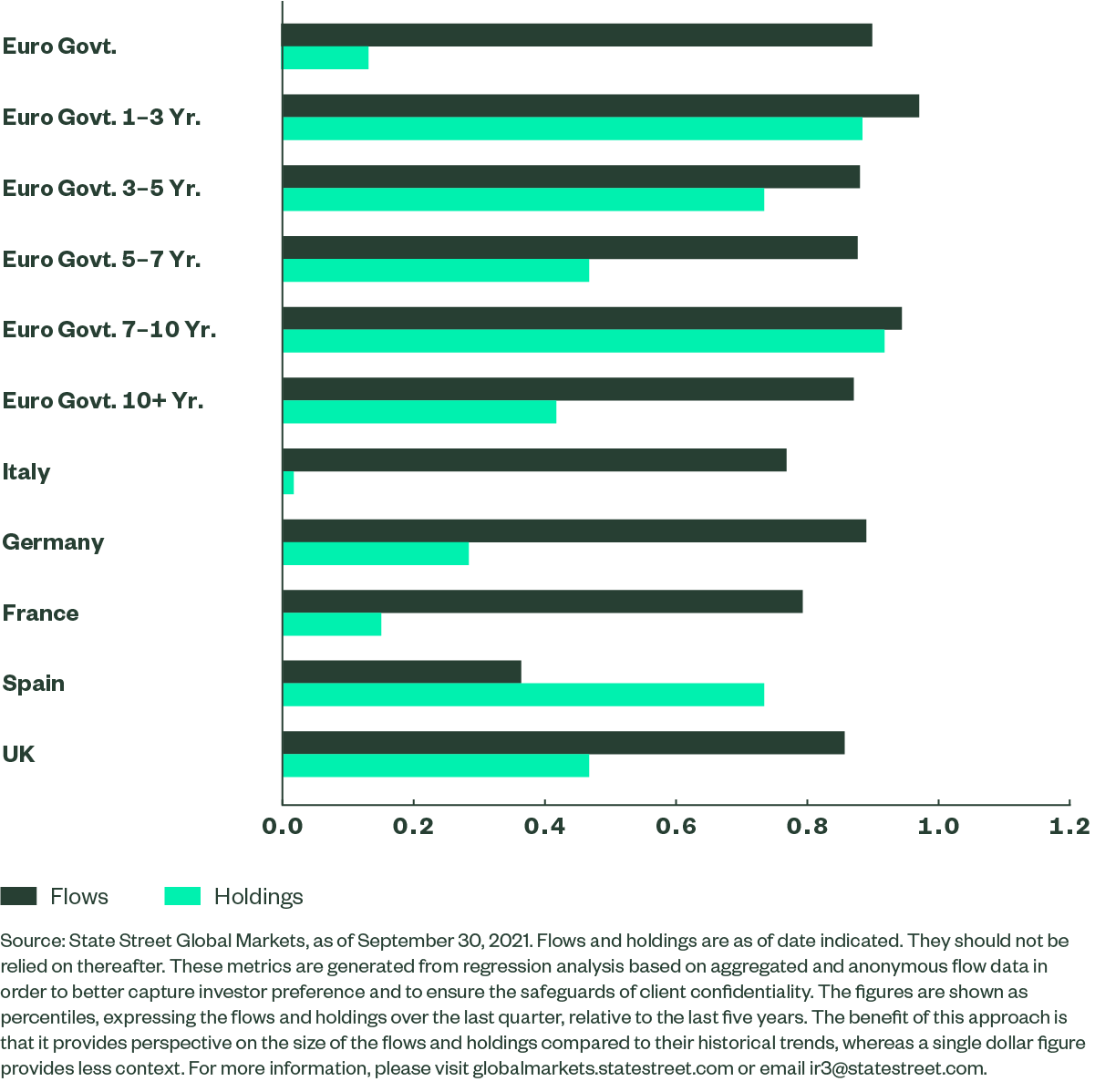 Not yielding to tiny tantrums

Fixed income markets are currently weighing several potential peaks — peak growth, peak inflation (maybe) and peak policy support (likely). Having leapt higher throughout the year, US growth expectations are finally normalizing following a quarter of largely disappointing activity data. While an expected growth rate of 5.9 percent (the current consensus) is still high historically, it is already much lower than the 7 percent that the US Federal Reserve (Fed) projected last quarter.

In contrast, adjustments to inflation forecasts have been less bond friendly. Peak inflation is now projected for the coming quarter, but the transitory inflation narrative cannot be taken for granted, a fact that policymakers are gradually adjusting to. While the Fed has hinted about when its asset purchases most likely will end, it has retained some flexibility about when it will begin tapering, and projections of actual interest rate hikes have been brought forward.

Together, this has created something of a mixed backdrop for fixed income markets. Long-term investor demand for US Treasuries across the curve has been below average across Q3, although we note it improved toward the end of the quarter. Interestingly, this stands in contrast to demand for European sovereign debt where, with the exception of Spanish bonos, demand has been in the top quartile of past flows. This is all the more notable given that Europe is experiencing a small inflation scare of its own and at least part of the European Central Bank’s (ECB) support for fixed income markets, the Pandemic Emergency Purchase Programme (PEPP), is set to wind down in Q1 2022. Perhaps with their now symmetric but still singular inflation target, as well as a more tepid growth outlook, European markets are viewed as a potentially safer sovereign fixed income.

As clear as the preference for European over US sovereign debt has been in the past quarter, it is also impressive how strong demand for riskier areas of fixed income remains. For all the macro uncertainty about peak growth, inflation and policy, demand for US high yield was in the top quartile once again and inflows into European corporate debt were even stronger. Interestingly, this demand for what yield remains has not yet extended to emerging market (EM) sovereign debt due to regional and inflation nuances that we will discuss.

In summary, a quarter that could have been extremely uncomfortable for fixed income — with taper talk, inflation scares and potential credit risks in emerging markets, in particular — has ended with still relatively robust demand from institutional investors.

Trouble for US Treasuries?

Despite the environment for a potentially more serious bond market dislocation, long-term investor demand for Treasuries across the quarter was not significantly below par. However, there was some variation. And in a perhaps more hopeful sign for Q4, demand for long-dated bonds accelerated sharply in September, suggesting the additional rate hikes appearing in the Fed’s dot plot have not made investors too wary of duration risk. That doesn’t mean the message from investor behavior is all smooth sailing, though. Demand for inflation protection also ended the quarter strongly, which suggests the transitory inflation narrative cannot be taken for granted. And we also note a sharp drop in long-term investor participation in recent auctions — another trend that will need close watching with the debt ceiling and fiscal packages still up for debate.

A key theme through much of 2021 has been more robust investor demand for eurozone sovereign debt — despite much lower yields and a potentially dangerous combination of relatively weak growth and high debt levels. This resilience will face further tests in the next six months now that we have a clear end date for the ECB’s extra asset purchases through the PEPP and reemerging eurozone inflation. But for now, euro sovereigns remain the clear investor preference, perhaps because the starting levels for both growth and inflation expectations are so much lower in the area. The only caveat worth noting here is that while demand for Italian debt remains robust, we see weaker demand for both Spain and peripheral bonds, the latter worth watching for potential signs of stress once the PEPP buying ends.

We would caution not to interpret robust investor demand for euro sovereign debt as indicating a lack of appetite for yield. Even though demand for Treasuries was tepid in Q3, the same cannot be said of US high yield debt and, to a lesser extent, investment-grade credit. This trend was mirrored in Europe, where demand for corporate debt was also robust. Although growth expectations may have peaked, we note that earnings news in general has been solid, suggesting corporates remain in better-than-average health. That isn’t the case everywhere, of course, but it is interesting to note that contagion from potentially lower growth expectations, more generally, and from the news of Chinese property giant Evergrande’s debt crisis, more specifically, has been limited so far.

Curiously though, it is telling that robust demand for credit does not extend to higher yielding local currency like EM sovereign debt, where flows have recovered only to near average levels. As we will explore later, this may reflect more troubling inflation trends in a range of EM markets and, in many places, the beginning of interest rate tightening cycles in response.

Healthy Appetite for US and Eurozone Credit

A type of investing, usually involving bills, notes or bonds, for which real return rates or periodic income is received at regular intervals and at reasonably predictable levels. Fixed income can also refer to a budgeting style that is based on fixed pension payments.

An overall increase in the prices of an economy’s goods and services during a given period, translating to a loss in purchasing power per unit of currency. Inflation generally occurs when growth of the money supply outpaces growth of the economy. Central banks attempt to limit inflation, and avoid deflation, in order to keep the economy running smoothly.

The income produced by an investment, typically calculated as the interest received annually divided by the price of the investment. Yield comes from interest-bearing securities, such as bonds and dividend-paying stocks.

The views expressed in this material are the views of State Street Global Advisors through the period ended September 30, 2021, and are subject to change based on market and other conditions. This document contains certain statements that may be deemed forward-looking statements. Please note that any such statements are not guarantees of any future performance and actual results or developments may differ materially from those projected.

All information has been obtained from sources believed to be reliable, but its accuracy is not guaranteed. There is no representation or warranty as to the current accuracy, reliability or completeness of, nor liability for decisions based on, such information and it should not be relied on as such.

Investments in emerging or developing markets may be more volatile and less liquid than investments in developed markets and may involve exposure to economic structures that are generally less diverse and mature and to political systems that have less stability than those of more developed countries.

Investing involves risk, including the risk of loss of principal.