Everybody knows about the coming consumer spending binge. Dual stimulus checks are flowing and coronavirus vaccinations are soaring. The Internal Revenue Service (IRS) has disbursed more than 163 million payments of $1,400 since mid-March. Those payments come on the heels of the second round of $600 stimulus checks received in December as part of the Consolidated Appropriations Act. About 140 million people — more than 42% of the US population — have received at least one dose of a COVID-19 vaccine.

Consumer confidence, retail sales, household income, savings and spending are all surging from year ago levels. Household income rose at a record pace of 21.1% in March, the largest monthly increase since records began back in 1959.1 The Commerce Department also reported the sharpest month-over-month increase in consumer spending since last summer. According to Empirical Research Partners, household savings have swelled by $2 trillion since the pandemic began, and if that increase in savings was drawn down it would be enough to boost consumption by 12%.

Expectations are that by summer, consumers will be splurging on airline tickets, hotels, cruises, restaurants, concerts, sporting events and movies. The anticipated consumer spending spree has already begun to show up in economic data as most states have loosened pandemic restrictions with the increase in vaccinations. First quarter GDP climbed 6.4% on an annualized basis, driven by a massive 10.7% acceleration in consumption growth.2 And, the second quarter figures are likely to be even better.

Don’t Forget About Me

Yet, while investors have thoughtfully prepared for the consumer spending bonanza, they have failed to appreciate the approaching business spending boom. During the height of the pandemic, businesses slashed spending on capital expenditures, dividends, share buybacks, Research & Development (R&D) and Mergers & Acquisitions (M&A). They conserved cash, took advantage of ultra-low interest rates to raise debt on more favorable terms and bolstered liquidity. Moody’s Investors Service reported that the cash holdings of US non-financial companies hit a record high amid the coronavirus pandemic. Aggregate corporate cash surpassed $2.1 trillion, up more than 30% from the end of 2019 and 6% higher than the previous peak reached at the end of 2017.3

Today, fueled by many of the same dynamics stoking consumers, business confidence, revenues, earnings per share and profit margins are soaring, exceeding the rosiest of expectations. More than 60% of the S&P 500’s market cap has reported first quarter earnings results. Earnings have surpassed estimates by 23.9%, with 84% of companies beating expectations. When earnings season concludes, revenues will have likely grown by 8.6% and earnings-per-share by nearly 42% year-over-year.4 Second quarter earnings results are expected to be even stronger. In addition, the evolving regulatory and tax landscape under the Biden administration and Democratic-controlled Congress will likely accelerate businesses spending plans. And, finally, while the double-digit annualized gain in consumption growth in the first quarter GDP figure suggests that the fiscal stimulus was a roaring success, it’s worth noting that business investment expanded by a solid 9.9% in the first quarter.5

Businesses aided by huge cash reserves, cheap financing costs and sky-high stock prices are likely to unleash a massive spending spree this year, particularly through share buybacks and M&A, likely propelling stocks to greater heights in the near term. 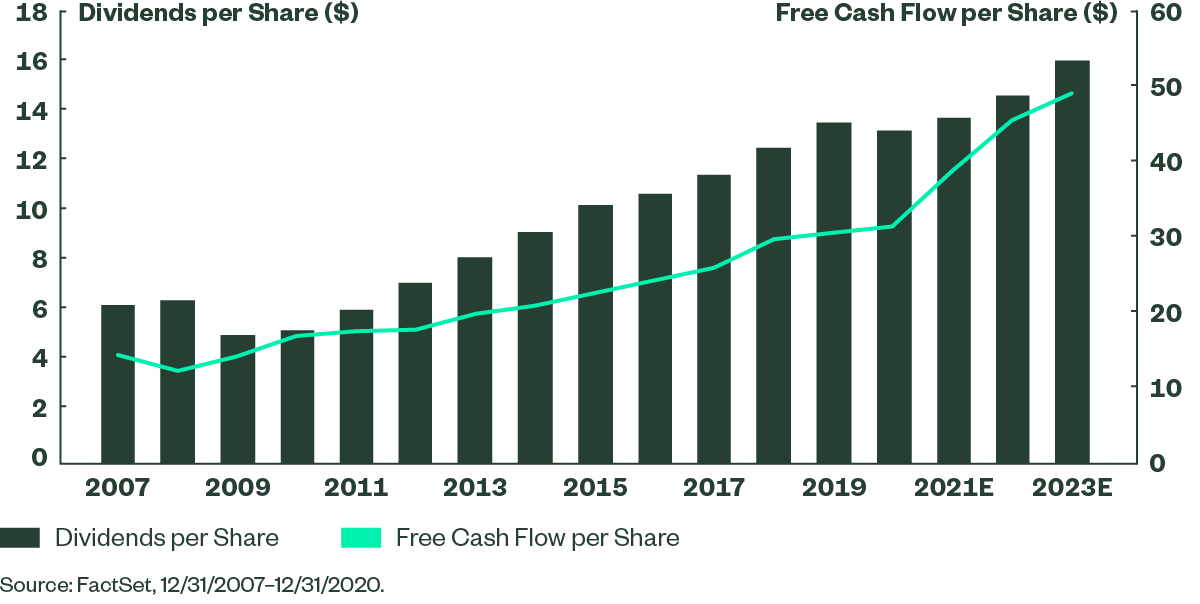 Analyzing the five most recent pre-pandemic calendar years (2015–2019), on average S&P 500 companies spent their cash in these percentages:

During those five years, R&D, dividends and capital expenditures percentages were relatively stable. The amount of cash that companies spent on M&A and share buybacks was more volatile. For example, S&P 500 companies spent 17% of their cash on M&A in 2015 but only 10% of it in 2019. Meanwhile, share buybacks were 24% of cash usage in 2017 but the very next year they reached a peak of 30%.7

Let’s assume that R&D and capital expenditures will rebound to pre-pandemic averages this year. Dividends are more complicated. Dividend growth slowed in the pandemic plagued year and many companies were forced to cut dividends. As a result, companies that have been able to consistently grow their dividends despite the challenges of the last year may be attractive investments, especially given the still low yields offered by traditional fixed income securities. However, uncertainty about their future tax treatment could dampen investor enthusiasm for dividends. For that reason, a resurgence in corporate share buybacks is taking shape in 2021.

Share buybacks are expected to increase by 30% this year versus depressed levels a year ago. Yet, buybacks will remain about 24% below the 2018 peak of about $800 billion.8 Share buybacks are a conservative option for corporate executives that may still be uneasy about the economic recovery, COVID-19 and expected changes to the tax code. And, investors love them. Tech giants, Apple, Alphabet (Google parent) and Facebook have been gobbling up their own shares through repurchases. Apple bought $19 billion of its own stock in the first quarter, bringing the total to $77 billion over the past four quarters and they just added $90 billion to their repurchase authorization.9 It’s not just cash rich technology companies engaging in share buybacks. Bank of America, Pulte Group, Darden Restaurants and many others have announced share buyback plans in recent weeks. The continued surge in share buybacks will likely further support already high stock prices this year.

M&A activity is skyrocketing too. According to Refinitiv, the first quarter had the largest value of M&A activity for an opening quarter since records started in 1980. Global M&A deals totaled $1.3 trillion in the first quarter, a 94% year-over- ear increase. It’s the second largest M&A quarter on record, eclipsed only by the second quarter of 2007, when $1.4 trillion in deals got completed.

What’s driving the M&A frenzy? Access to inexpensive and abundant capital continues to bolster activity. Low interest rates are expected to keep borrowing costs down. At the same time, with stocks at all-time highs, an increase in stock-for-stock transactions is likely. And, business confidence is increasing as prospects for the post-pandemic economy improve. Industries that were more insulated from the effects of COVID-19 contributed to a rebound in M&A volumes in the second half of 2020. However, industries that were more negatively impacted by the pandemic mostly sat on the sidelines. Now, with better business conditions and greater clarity on their future, pent-up M&A demand from these industries is being released this year.

According to Morgan Stanley, businesses continue to be focused on accessing capital, strengthening their competitive positions and investing in scale. As a result, M&A activity in technology, healthcare and financial services is expected to remain elevated. For example, Microsoft recently acquired the speech recognition company, Nuance Communications for $16 billion. Nuance’s technology will be used in Microsoft’s healthcare cloud products.

Businesses are also looking to increase global scale and shore up supply chains. Regrettably, as the pandemic raged, cross-border M&A plummeted. But, now with an EU-UK trade deal in place, a possibly more friendly Biden administration in office, vaccine distribution advancing and the potential for business travel to restart, cross-border M&A activity may heat up in the second half.

Private equity firms and special purpose acquisition companies (SPACs) will also contribute significantly to M&A activity this year. Private equity firms are sitting on a massive amount of dry powder that will have to be put to work in leveraged buyouts or other potential transactions. SPACs are shell companies created for the sole purpose of taking a private company public. Their finite window to identify acquisition targets creates urgency to get deals done. According to SPAC Research, there are more than 370 SPACs with over $118 billion in capital actively seeking to make a deal.

Finally, the threat of rising interest rates, higher taxes and a more burdensome regulatory environment will likely hasten M&A activity this year. This may continue to create an attractive backdrop for small and mid-cap companies.

Investors and policymakers have continually underestimated the economic and earnings rebound from the pandemic. Now, they are failing to recognize the massive business spending boom emerging in 2021. The consumer spending binge is well-known and largely priced into stock prices. But, the business spending boom has so far flown under the radar of investors and could act as a much needed catalyst to further support stock valuations.

Businesses flush with cash, emboldened by cheap borrowing costs and empowered by sky-high stock prices are likely to spend lavishly on share buybacks and M&A for the remainder of this year. Rising expectations for interest rates, an evolving regulatory environment and growing uncertainty about future taxes will only encourage corporate executives' animal spirits.

Technology, healthcare, financial services and small and mid-sized companies will all be likely beneficiaries from this unappreciated business spending bonanza.

Fixed Income
A type of investing, usually involving bills, notes, or bonds, for which real return rates or periodic income is received at regular intervals and at reasonably predictable levels. Fixed income can also refer to a budgeting style that is based on fixed pension payments.

Gross Domestic Product (GDP)
The monetary value of all the finished goods and services produced within a country’s borders in a specific time period.

Important Risk Information
The information provided does not constitute investment advice and it should not be relied on as such. It should not be considered a solicitation to buy or an offer to sell a security. It does not take into account any investor's particular investment objectives, strategies, tax status or investment horizon. You should consult your tax and financial advisor. All information is from SSGA unless otherwise noted and has been obtained from sources believed to be reliable, but its accuracy is not guaranteed. There is no representation or warranty as to the current accuracy, reliability or completeness of, nor liability for, decisions based on such information and it should not be relied on as such.

The views expressed in this material are the views of Michael Arone through the period ended April 30, 2021 and are subject to change based on market and other conditions. This document contains certain statements that may be deemed forward looking statements.