Although global sovereign bonds have been witnessing a sell-off, Chinese government bonds have been relatively stable. This is partly due to China’s economic recovery and partly due to persistent inflows into its sovereign bonds. The recent bout of volatility demonstrates the diversification benefits that Chinese government bonds may bring to global bond portfolios given their low correlation with other major bond markets.

Sovereign bond markets across the world have been witnessing a sell-off year to date (causing equity markets to wobble) driven by a sharp rise in US yields. Chinese government bonds, however, have barely budged, which we believe is primarily due to the divergence in China’s economic recovery compared with other emerging market or developed market (DM) economies. To some extent, this resilience can also be attributed to the persistent inflows into Chinese sovereign bonds that we have been witnessing for some time from foreign investors. 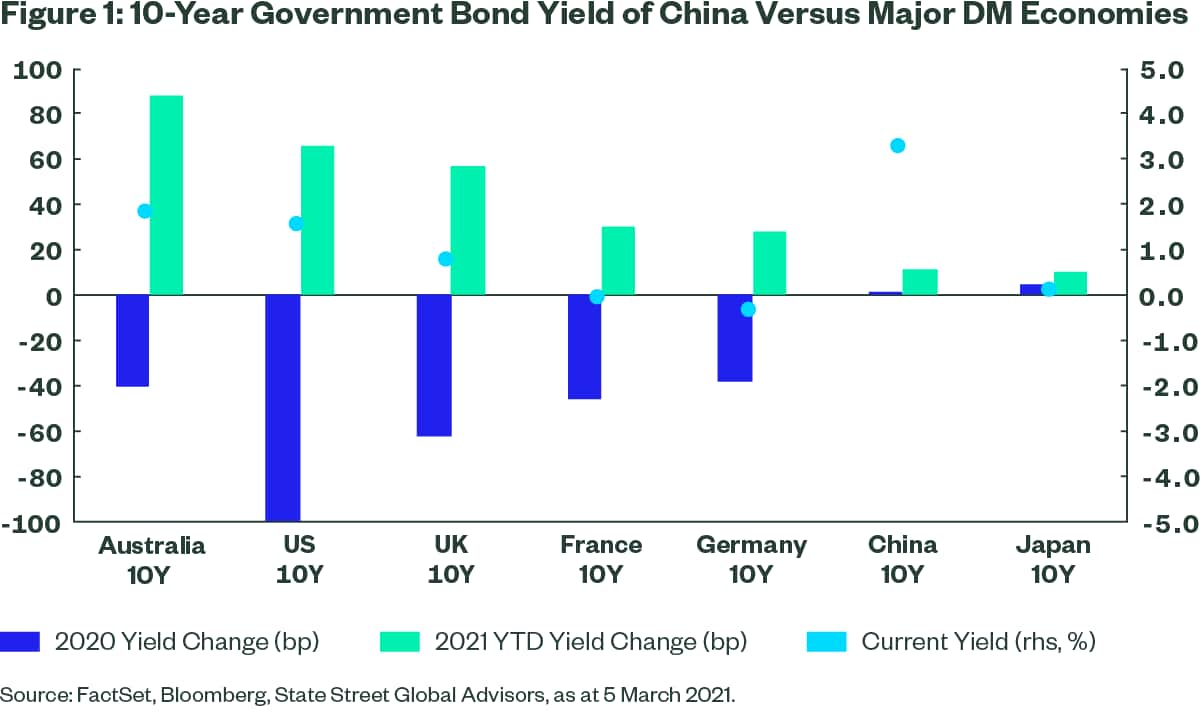 In Figure 1 we compare China’s 10-year government bond yields versus that of major DM economies both in 2020 and year-to-date 2021. The comparison shows that China’s bond yield changes are quite similar to that of Japan, where the 10-year rate is anchored by the Bank of Japan’s targeted policies to control the yield curve.

Of course, Figure 1 does not show the fluctuations that Chinese sovereigns underwent through the course of 2020. At the beginning of 2020, Chinese government bond yields fell by about 65 basis points (bp) as the economy shut down to contain the COVID-19 pandemic. But yields recovered quickly to where they started the year as the economy re-opened. In contrast, US government bonds yields fell more sharply (by about 140 bp) but only recovered by around 30% by the year-end.

Why Did This Happen?

First, the People’s Bank of China, China’s central bank, did not cut rates as aggressively as the US Federal Reserve, which resulted in a lower fall in yields. Second, since China was able to contain the virus and re-open its economy more efficiently, the country’s government bond yields were able to normalize more quickly.

Sovereign bond yields in other major DM economies also fell the same way as those in China (except in Japan where yield movements were more muted), but similar to the United States (US), they failed to recover back to the levels observed at the start of the year.

This suggests that what we are witnessing now is more likely a normalization of DM economies that were disrupted by the COVID-19 pandemic. Markets, however, are expected to continue to test global central banks’ resolve to keep interest rates low.

The decoupling in yield movements between China and DM economies during the COVID-19 pandemic demonstrates the diversification benefits that Chinese bonds could bring to a global bond portfolio.1 Chinese government bonds also continue to provide an attractive yield pickup versus other DM bonds.

At its widest level over the past 15 months, Chinese 10-year government bonds provided a yield pickup of about 250 bp over 10-year US Treasuries. The yield pickup currently is around 170 bp, which is much higher compared with that of Japanese or European bonds.

As we highlighted in our 2021 Global Market Outlook, we think China is a market that investors should consider seriously. We believe Chinese bonds should be assessed as part of asset allocation decisions given their combination of attractive yields and the diversification benefits that they bring to global bond portfolios.

The views expressed in this material are the views of the Investment Strategy & Research team through 10 March 2021 and are subject to change based on market and other conditions. This document contains certain statements that may be deemed forward looking statements. Please note that any such statements are not guarantees of any future performance and actual results or developments may differ materially from those projected.

All the index performance results referred to are provided exclusively for comparison purposes only. It should not be assumed that they represent the performance of any particular investment.