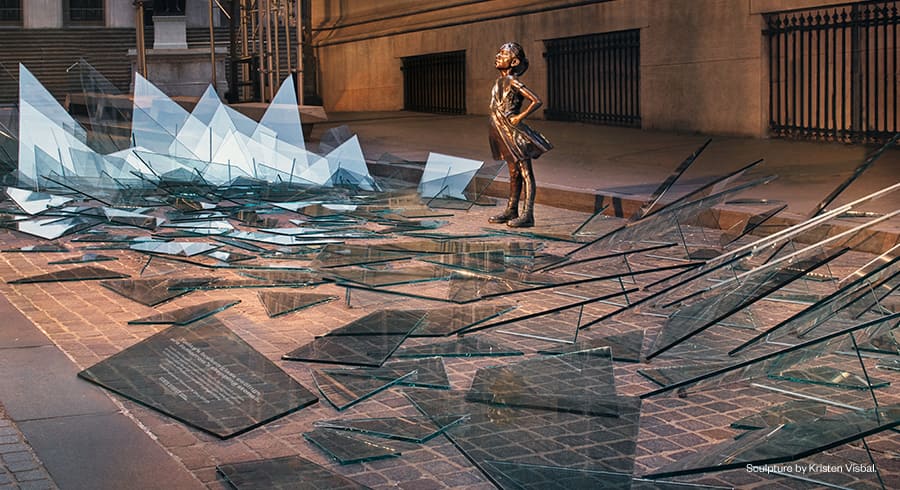 It’s been four years since Fearless Girl — the statue of a girl standing her ground in the heart of Wall Street — sent an immediate and unmistakable message to the world’s business leaders: that having strong women in leadership matters. Since that time, countless women across the world have challenged conventional thinking — whether it is in corporate boardrooms, Fortune 500 companies, or at the highest levels of government from the European Commission to the White House. Today, in celebration of International Women’s Day, we have installed a broken glass ceiling surrounding Fearless Girl as a symbol of the new ground women are breaking every day.

Despite great progress, this past year we have seen how the pandemic disproportionately affected women who had to leave their jobs to care for their families, as well as the negative impact on racially and ethnically diverse communities. Given the clear implications for businesses, the economy, and society, these challenges remind us why diversity of thinking and problem-solving in leadership is critical to the stewardship of the assets we manage for clients like you. That’s why I’m pleased to share with you this update on our ongoing efforts and results.

Shattering Ceilings in the Boardroom. We launched the Fearless Girl Campaign in 2017 based on a simple truth: that companies with more diverse leadership perform better.1 Since that time, our call to companies in our investment portfolios to create greater gender diversity on their boards has resonated across the globe — first in the US, UK, and Australia, and then on to continental Europe, Canada, Japan, Hong Kong, and Singapore. Now, 862 companies (approximately 58%) of the 1,486 companies we had identified with previously all-male boards have responded to our call by adding at least one female director.2 Whether it is every single company in the S&P 500 now having a woman on the boards, or prominent and influential voices across the financial services industry taking a stand, today there is a growing recognition that board diversity is an issue not simply of values but of value.

Removing Barriers to Racial and Ethnic Diversity. While Fearless Girl demonstrated that diversity and performance go hand-in-hand, we know that gender is only one part of the diversity conversation. Last August, we began informing portfolio companies that we would begin to engage with them on the issue of racial and ethnic diversity and subsequently announced a proxy voting policy to ensure disclosure around the issue. Just last month we led a coalition of financial services companies calling for the disclosure of EEO-1 gender and racial diversity data and urged the asset management industry as a whole to not only disclose this information but to engage with portfolio companies on the issue.

Holding Ourselves Accountable for Progress. Next month, Lori Heinel will become the first female Global Chief Investment Officer (CIO) for State Street Global Advisors, overseeing $3.47 trillion* of assets under management. Her keen understanding of client needs, industry experience and investment skill, and knowledge of how issues like ESG impact portfolios make her an ideal leader for this moment.

Lori also demonstrates why, when it comes to diversity, real accountability starts with each of us. To speed progress across the diversity spectrum, we have launched several efforts internally to recruit, retain, and promote more diverse employees, and are advancing 10 actions to eliminate racial inequity in our organization. These steps and others are about recognizing that if inclusion and diversity contribute to better performance, better decision-making, and better outcomes, then each of us must do our part in shattering the glass ceilings in our own organizations.

Creating Change, One Company at a Time. Of all the things Fearless Girl proved — from the fact that long-term value really does begin at the board, to the reminder that we all have so much untapped potential in our own employee ranks — perhaps the most important is that change is both desperately needed and very much possible. Four years later, that’s only one of the many reasons she’s still going strong. Here’s to many more.

The information provided does not constitute investment advice and it should not be relied on as such. It should not be considered a solicitation to buy or an offer to sell a security. Investing involves risk including the risk of loss of principal. It does not take into account any investor’s particular investment objectives, strategies, tax status or investment horizon. You should consult your tax and financial advisor.