Two Days in the Lives of High-Sentiment Stocks

In recent months, we have been discussing the vulnerability of expensive and high-sentiment stocks as they have become a more and more concentrated part of the listed equity market. On November 9, the news of a potentially successful vaccine discovery by Pfizer unlocked a major shift in market sentiment, which continued through November 10. There were clear winners and losers from this rapid rotation.

The steepest declines occurred in the most expensive names with the strongest market sentiment (on our multi-dimensional measures of both themes). These declines also had a large impact on market indices due to company sizes. The ten largest negative contributors to the overall market return in this category were Amazon, Microsoft, Facebook, Apple, Nvidia, Paypal, Adobe, Zoom, Shopify, and Netflix. These all sit in the segment of the market that is most expensive, and which shows the most positive sentiment – and they all experienced sharp reversal on the vaccine news. While the MSCI World returned around 1.5% over those two days, these companies experienced an average return of -10%.

The stocks that were most heavily purchased by investors during those two days were highly risky, deep value stocks. We would characterize “deep value” as having a low price/book ratio; risk stocks are characterized by  high beta and high volatility. Many of the companies in this category are Banks, Automakers, Energy stocks, and Real Estate. The most extreme quintile – low price/book, and high risk – had a return of 16% on average over two days. Banks and Energy stocks in this segment rallied 20% on average, and Real Estate went up 27%.

Expensive, high-sentiment names that have been strong beneficiaries of a locked down/online world, plus disruptors.

What Did All the Other Stocks Do?

The most relevant single dimension of stocks that reacted to the news was price momentum. Figure 1 shows a very clear negative relationship between the stock price movement of MSCI World stocks and their current price momentum score.1 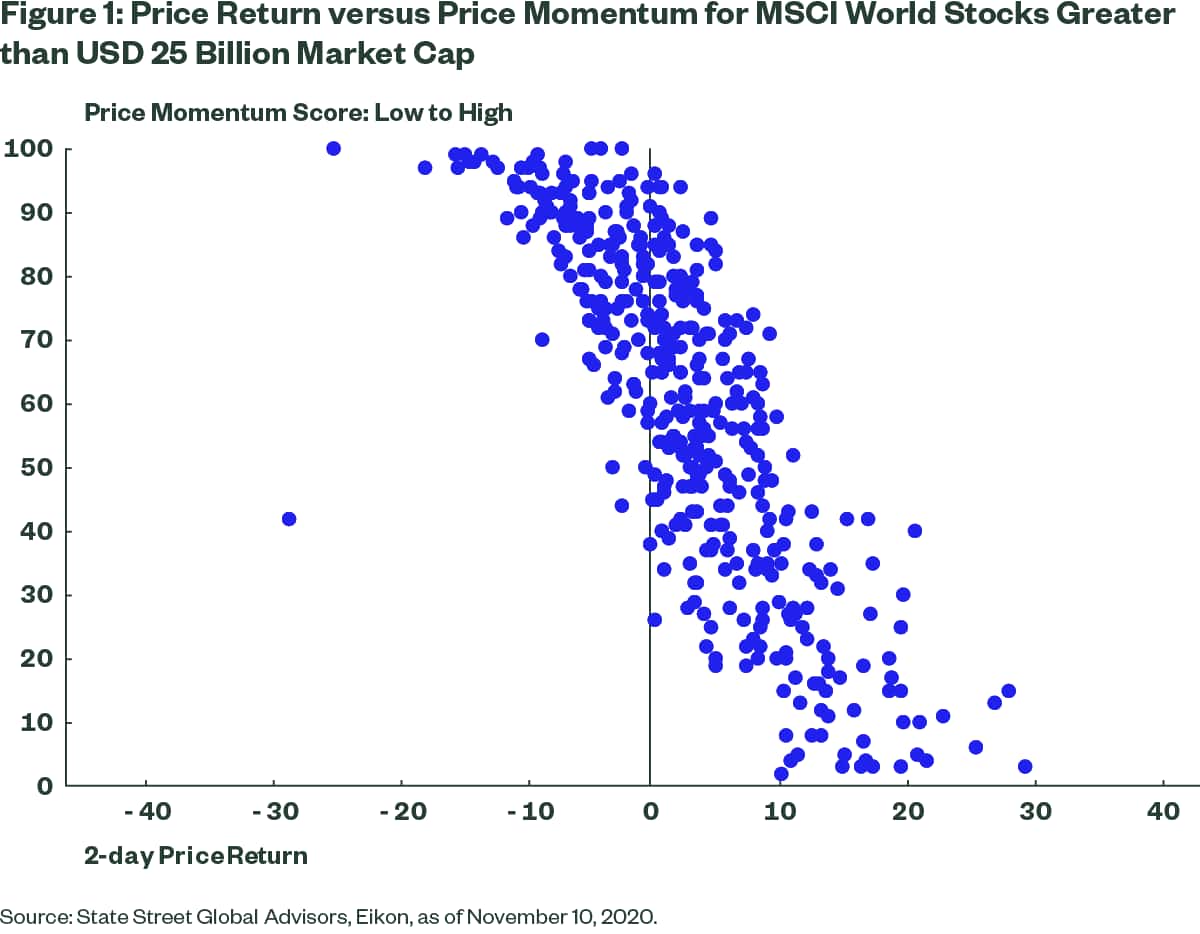 We believe that the best places to find opportunities are outside of the extremes of value, risk, or price momentum. We have highlighted the risks associated with the expensive, high-sentiment cohort in previous commentaries.

We believe the cheapest, highest-risk reversal stocks are unlikely to sustain their strong returns in the coming 1-2 months. This is due to the risk of increasing COVID-19 cases in large parts of the world and possible further economic shutdowns to curb the spread of the virus. A widely distributed vaccine is still on the distant horizon and there are many solvency risks still present in large parts of the economy.

We prefer to hold undervalued names with balance sheet strength – i.e., companies that have the best chance of withstanding the wait for widespread vaccine distribution without going bankrupt – and those that aren’t as vulnerable to consumer weakness in the event of wider job losses or economic shutdowns.

The views expressed are the views of Active Quantitative Equity only through November 16, 2020 and are subject to change based on market and other conditions. This document contains certain statements that may be deemed forward-looking statements. Please note that any such statements are not guarantees of any future performance and actual results or developments may differ materially from those projected.

Investing involves risk including the risk of loss of principal. Quantitative investing assumes that future performance of a security relative to other securities may be predicted based on historical economic and financial factors, however, any errors in a model used might not be detected until the fund has sustained a loss or reduced performance related to such errors.