Emerging market (EM) equities’ year-to-date returns1 though September 17 are down 1.7%, with MSCI China down 14.8% and MSCI EM ex-China up 8.2% as the tailwinds of global liquidity and fiscal stimulus begin to shift. During the same period of 2020, MSCI EM was up 1%, with MSCI China up 17% and MSCI EM ex-China down 7.5%. The reflation-driven outperformance of value versus growth equities has been challenged over the past few months by the combined effects of slowing economic recovery, lower commodity prices, and expectations of the US Federal Reserve (Fed) tapering bond purchases. China regulatory policy tightening, the upcoming political cycle in EM countries, and the ongoing battle with COVID variants across the globe also add to concerns about headwinds on the horizon. Three particular concerns are shaping our view on EM equities now, as we head into the final quarter of 2021.

The pace of the global economic recovery is beginning to moderate, as the effects of large policy stimulus fade and the effects of COVID-19 variants persist. Despite moderating economic growth, expected growth rates for 2021 and 2022 remain at par with, or above, 2019 levels (see Figure 1a). Manufacturing PMIs for August suggest growth momentum may be peaking for large economies such as the US, UK, Germany, and the Eurozone, but all remain at high expansion and well above the average of 2016-2019. Many EM countries may also have passed their peak, as August PMIs are below the past three-month average for all countries (see Figure 1b), with the exception of India, where momentum is higher as the second COVID-19 wave ends and vaccination rates rise.

China’s Manufacturing PMI dipped below the 50.0 level in August for the first time since April 2020, likely due to flooding, building pressures in the property market, and a resurgence of COVID cases that has caused severe, targeted lockdowns. A slowdown in China’s property sector is likely as the impact of the country’s second-largest property developer, China Evergrande, works though its debt woes. China’s property and related sectors make up about 30% of GDP, so the degree to which the sector slows will determine the size of the drag on overall GDP. Investor focus will turn to the nature of China’s policy response, meant to lessen the possibility of a sharp economic decline.

A slowdown in China may create additional headwinds for emerging markets. It is important to note that the countries that we lump into emerging markets are not all the same, and that high economic growth doesn’t always translate into great equity performance. Moderation in economic activity has taken the spotlight off of economically sensitive companies and pointed it back toward quality companies with long-term earnings growth potential, as is evidenced by the recent outperformance of EM growth relative to EM value. 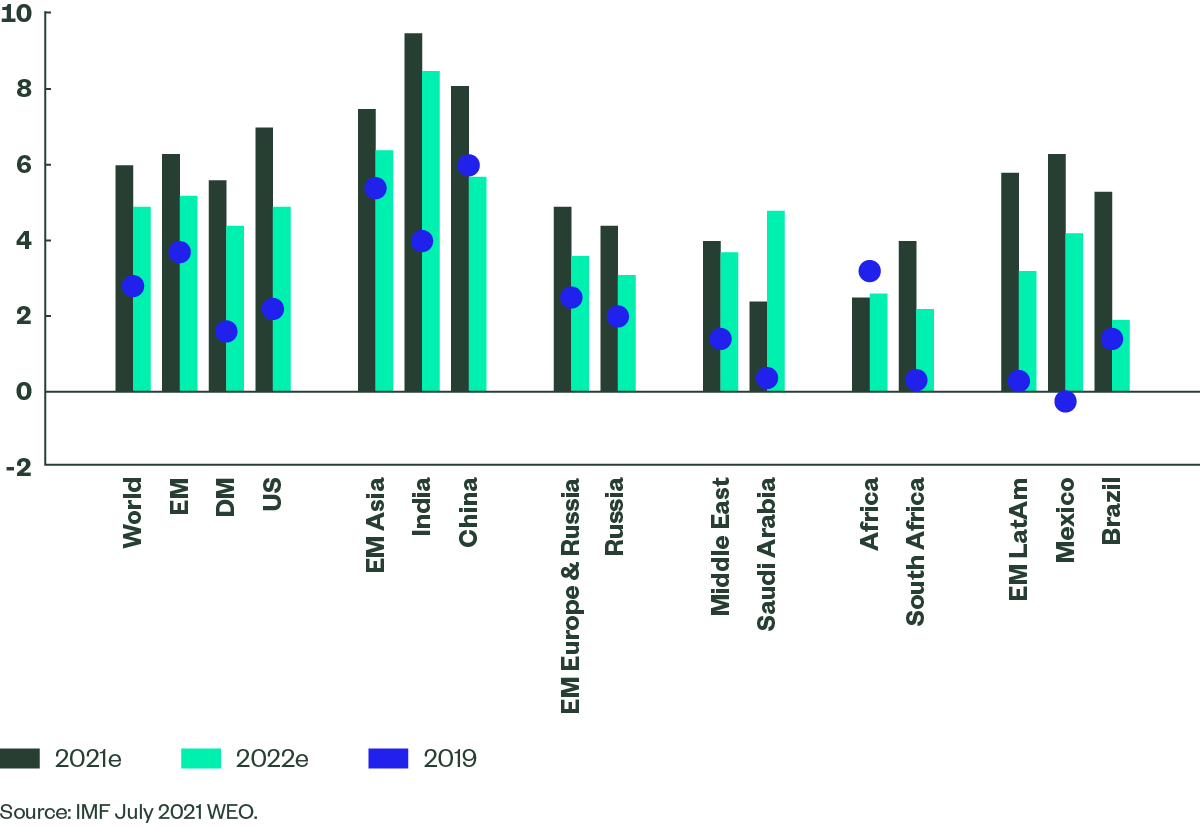 2. Downside Risks to Growth in China, Including Regulatory Actions

China’s economic recovery from the pandemic crisis moderated in the first half of 2021, as was widely anticipated. In the past few months, however, serious flooding, a resurgence in COVID cases and lockdown measures, regulatory action, and a property market shock from China Evergrande have all increased downside risks to growth in the near term. Some of this is already reflected in the equity market; Figure 3a shows the divergence in MSCI China and MSCI ex-China since the beginning of 2021. The key question for investors now is: “Will the situation become even more challenging from here, or has the pullback in the market sufficiently priced-in the risk?”

The current wave of regulatory actions in China, which started with the abrupt halt of the Ant Group IPO last November, continues today – it has been quite far-reaching. Regulatory actions have included stepped-up anti-trust enforcement against the largest platform companies, demands for better labor conditions for new-economy workers, tightened rules on personal data protection, more restrictive rules for the private education sector, and new reviews of companies that are seeking an IPO abroad.

Many of these regulatory actions seem to be justified, for example, anti-trust enforcement that promotes competition and prevents abuse of power, better working conditions for labor, and the pursuit of income equality. Several of these regulatory actions, however, have caused lasting harm to businesses, for example, to companies in the after-school-tutoring sector that have had to dramatically restructure and scale back their operations.

China’s continued pursuit of objectives such as financial and social stability, balanced economic development, “Common Prosperity,” national security, self-sufficiency, a cleaner environment, and carbon neutrality means that government will continue to play an active role in regulating private businesses. A rapidly developing and evolving economy requires that regulators keep pace with changing conditions. For active investors, gaining an understanding of the evolving regulatory environment is important in order to identify long-term winners and make necessary adjustments to positionings.

China Evergrande’s problems can largely be attributed to its over-extended financial leverage, as well as to high-risk moves into cash-draining new businesses such as electric vehicles. The large size of Evergrande, with total assets of RMB2 trillion, poses significant challenges for regulators. Fixed Asset Investment (FAI) in Real Estate was RMB17.25 trillion, or roughly 17% of GDP at the end of 2020 (see Figure 2b). With the property market holding up so far, we believe a managed restructuring is achievable, though the likely outcome will see bond and equity holders suffering sizable losses. A managed restructuring should act to limit the damage to the property sector and overall economic growth.

Going forward, it is increasingly important to understand which sectors and companies will win in the long term as the government continues to pursue its key policy goals. We expect additional regulatory changes to come in waves that are timed to avoid disturbing key events, including the G20 Summit at the end of October (with an expected meeting of President XI and President Biden), the Beijing Winter Olympics in February 2022, and China’s 20th National Party Congress in October/November 2022.

3. A Taper Tantrum Repeat Is Unlikely, Though Liquidity Withdrawal Will Be a Headwind for EM

Concern over monetary policy normalization, especially quantitative easing (QE) tapering by the Fed, is valid given the 2013 Taper Tantrum experience. The “Fragile Five” EM countries – Brazil, India, Indonesia, South Africa, and Turkey – were among the worst casualties of the 2013 Taper Tantrum. While we do not expect the upcoming tapering and policy normalization by the Fed and other major central banks to be painless for EM countries, we do not expect the same degree of downside for EM assets, for five reasons:

Some EM countries have already started to raise rates from extreme low levels. The Central Banks of Russia and Brazil have been hiking policy rates steadily this year, while others have just started to hike rates. Many, like India and South Africa, have yet to start; in some countries this may lead to sharp upward adjustments in interest rates. Countries with strong institutions and credible policymakers should be best positioned to weather taper headwinds when they hit.

Figure 3b: EM Current Account Deficits Have Improved from Where They Were Before the 2013 Taper Tantrum
Current Account Balance of the 2013 “Fragile Five” (Plus Argentina), as % GDP (End 2012 versus Expected 2021)

Investing in emerging market equites is never dull. Challenges and headwinds come from many directions – from downturns in economic growth and trade to uncertainties in political and geopolitical events. The challenges emerging markets face today include a moderating global recovery, a China growth slowdown amid regulatory tightening, and the impact of deleveraging as well as monetary policy normalization. These challenges will create both risks and opportunities for investors.

Some of the risk is reflected in valuations, as EM equities continue to trade at a P/E valuation discount to developed market (DM) equities (currently 33%, compared to an historical discount of about 26%). On a price/book basis, EM equities are at an even deeper discount to DM equities, i.e., closer to 40%. Also, while 2021 consensus earnings grown expectations are very high at about 54% (see Figure 4), earnings expectations for 2022 already reflect a decline to about 8% on expectations of moderating economic recovery and reflation. From a sector perspective, materials, energy and industrials are driving 2021’s substantial EM earnings growth expectations, while consumer discretionary (particularly E-commerce), IT, and consumer staples are expected to take the lead in 2022.

As we return to the mode of modest global growth, select companies in a variety of countries with strong business models and favorable earnings growth at reasonable valuations will provide interesting investment opportunities. Stock selection will matter.

The views expressed are the views of Fundamental Growth and Core Equity through September 23, 2021, and are subject to change based on market and other conditions. This document contains certain statements that may be deemed forward-looking statements. Please note that any such statements are not guarantees of any future performance and actual results or developments may differ materially from those projected.