As the COVID-19 crisis has taken hold, global equities as represented by the MSCI World Index have lost around 30%1 amid extreme volatility. Given the scale of the exogenous shock represented by this disease, the level of the equity market drawdown is not a surprise, but the velocity and breadth of it certainly have been.

Some investors may understandably find it tempting to meet unprecedented circumstances with unplanned, reactive responses. Ultimately, however, we believe this unprecedented set of circumstances gives rise to an exceptionally strong argument for sticking with established investment discipline, rather than deviating from it.

A drawdown of unprecedented velocity

The speed of this drawdown is like nothing we’ve have faced before. During the Tech Bubble drawdown, MSCI World took 241 days – approximately eight months – to lose more than 30%. It took over five months (166 days) for MSCI World to fall more than 30% during the Global Financial Crisis. In the COVID-19 crisis, MSCI World has plummeted more than 30% in only 25 days – and as of this writing, it’s far from clear that it’s reached its bottom (see Figure 1). 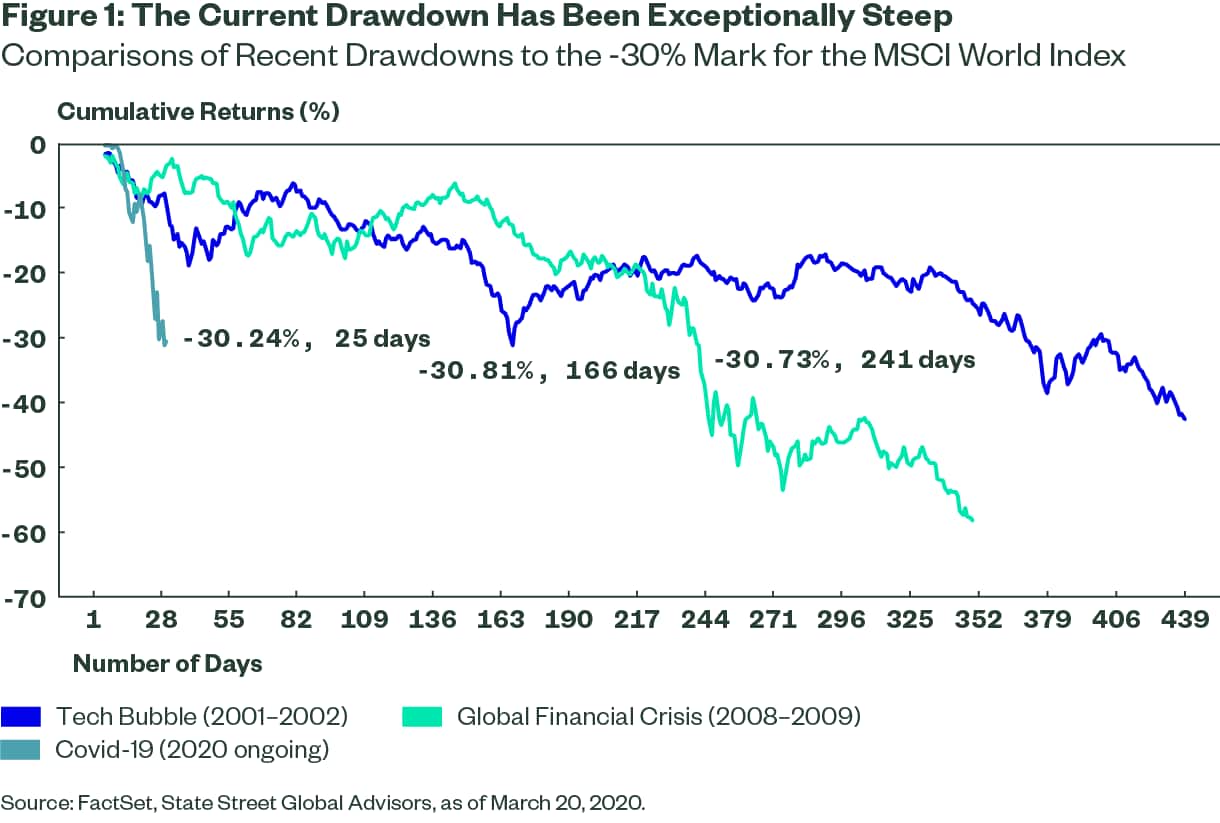 The current drawdown is also marked by unusual breath, represented by a broad selloff across markets and sectors. If we look at sector returns, for example, we find that these have been much narrower compared to prior drawdowns – a telltale sign of investors seeking cash for safety in an uncertain market environment. The best performing sector in the current drawdown has outperformed the index by only 12.87% (up to March 20, 2020). In prior episodes such as the GFC and Tech Bubble, the best performing sector outperformed the MSCI World by 20% and by 32%, respectively (see Figure 2). 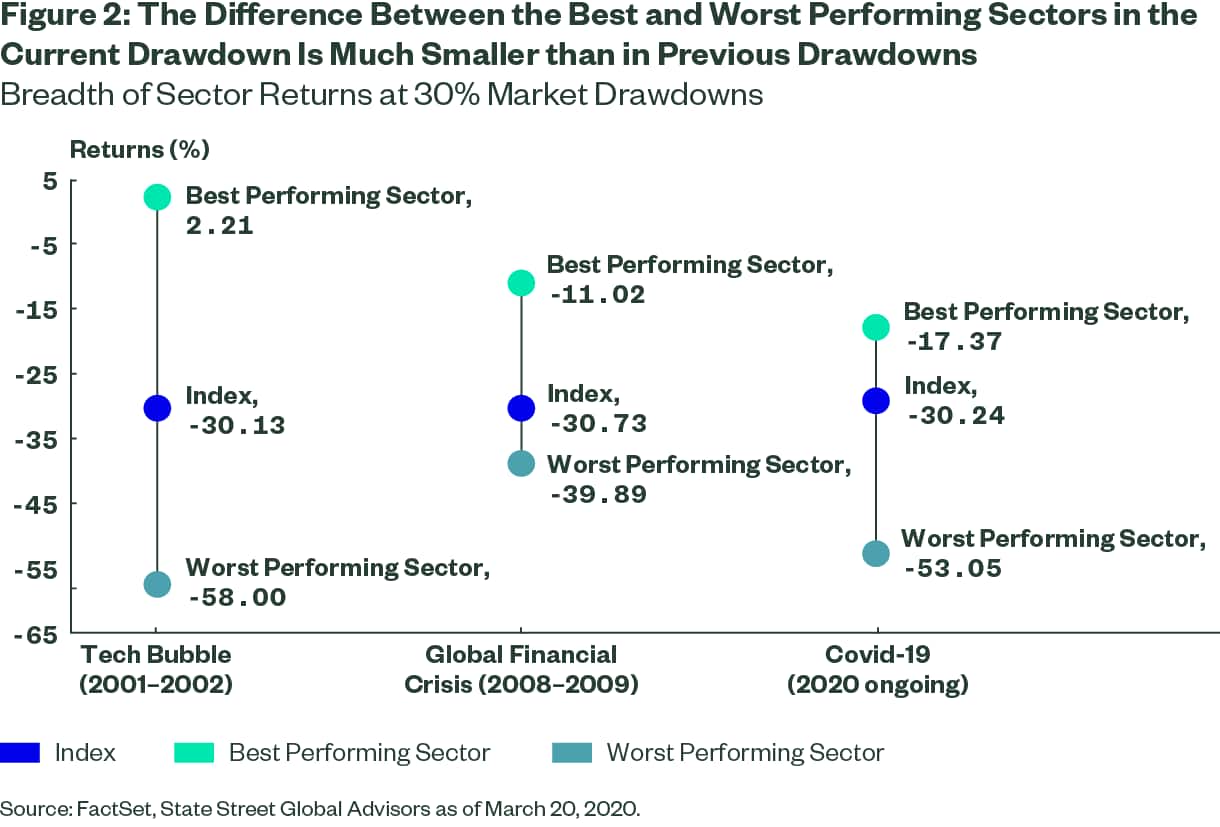 Estimating the economic and market impact from a wholly exogenous shock like this pandemic is so difficult that, in the end, most attempts can only boil down to guesses. How will the infection rate change? How long will mandatory social distancing restrictions last? This uncertainty extends to potential fiscal and monetary policy responses – will they be enough to blunt the impact? Will they carry unintended consequences, and if so, what will those be? It is entirely unclear. This extraordinary degree of uncertainty has been breeding volatility in financial markets across the globe.

What we do know is that it is imprudent to make rash decisions in erratic markets. The odds that any given decision will result in gains are not in investors’ favor under conditions of great uncertainty. In ordinary market conditions, the best investment decision makers are distinguished by incremental improvements in forecasting ability compared with their peers. Our current circumstances are characterized by a universal rise in uncertainty due to exogenous shock, with a broad-based selloff and little refuge.

An illustrative analysis (Figure 3) shows that a very small decrease in the certainty of an outcome (e.g., only a 1% change in certainty) can shift overall outcomes from winning to losing over many trials. Our current circumstances are characterized by a dramatic rise in uncertainty due to exogenous shock, with a broad-based selloff and little refuge. The principles underlying this illustration suggest that the odds probably do not favor investors seeking to make changes in these conditions. The more prudent course is to avoid taking drastic action as more information becomes available, circumstances shift, and uncertainty begins to dissipate.

As investors, we think it’s important in circumstances like these to continue thinking with a long-term view, over a full-market cycle. We’re currently observing many investors take the opposite approach, exhibiting the classic, irrational behaviors that have been extensively documented by behavioral economists.

As we strive to avoid those behavioral traps, we continue to apply our process to forward-looking expectations. Which stocks will represent good long-term investment opportunities? We think the answer to that question will partly hinge on quality – quality of the balance sheet, quality of earnings growth, quality of the business model. All of these are important attributes that will help to distinguish companies not just capable of surviving this extreme short-term uncertainty, but also those that will emerge from this crisis in a strong position to participate in the recovery. In future commentaries, we’ll examine the sectors where we expect to see high-quality companies that will embody these attributes.

2This analysis is based on a rigged coin-flip game. The game is rigged so that the player is almost certain to win on a given flip: a player has a 99% probability of landing on “heads” in the player’s favor. In other words, the player has near-perfect certainty of the positive outcome of any given flip.

If the coin lands on heads, the player wins a 1% gain. But if the player lands on the “tails” side of the coin, she loses -50%. Our rigged game is asymmetric in terms of potential gains and losses not in any attempt to assign these values to any particular decision investor might make in current market conditions. Instead, we’ve chosen these values deliberately, in order to make a point – most potential players would instinctively find that combination of odds and potential wins and losses unappealing. Why risk losing 50%, when your potential to win on a given flip is only 1%?

In fact, though, when there is an extremely high degree of certainty – in this case, 99% certainty about the outcome – this game has a positive expected return for the player, in line with the Law of Large Numbers. If you play the game enough, over a large number of trials, you’ll come out ahead.

But if the game assumed just a little less certainty – just slightly less perfect foresight – by reducing the probability of landing on heads and winning to 98%, playing this game would actually result in a net loss over many trials.

Past performance is not a reliable indicator of future performance. Index returns are unmanaged and do not reflect the deduction of any fees or expenses.

The views expressed in this material are the views of the Portfolio Strategy Research team through the period ended March 30, 2020 and are subject to change based on market and other conditions.

This document contains certain statements that may be deemed forward-looking statements. Please note that any such statements are not guarantees of any future performance and actual results or developments may differ materially from those projected.

All information is from State Street Global Advisors unless otherwise noted and has been obtained from sources believed to be reliable, but its accuracy is not guaranteed.