Publication of the Government Roadmap to Pensions Reform recently set out what we believe are important measures to improve the financial security of Irish people in retirement.

An important part of the Government Roadmap is the introduction of a mandatory or quasi-mandatory retirement savings system.

By delving into some of these issues, we hope to show some useful findings about the Irish population, as well as some lessons from across the globe.

Here’s a preview of a few of the findings:

The majority of Irish respondents were not optimistic about their retirement

However good or well-established the DC system is, the majority of Irish respondents reported low confidence. We also found that confidence levels in Ireland fell far below those of the US, and, probably a little surprisingly, marginally ahead of the UK, both of which have significantly higher participation rates.

My home is not my pension

A surprisingly small number of Irish people expect to use equity release (3%) or buy-to-let rental income (8%) to fund their retirement. This may in part relate to the current housing landscape where (i) adult children are not leaving the nest as early as they had in previous generations given rising rents and mortgage criteria, (ii) some Irish homeowners are still finding themselves with negative equity and (iii) mortgages are not being paid off by the time retirement is reached.

We asked our respondents whether they felt fully aware of all of the options available when planning for their retirement. A large proportion said they were not aware.

When asked the top three sources that they would seek help from when deciding what to do with their pension in retirement, the majority of respondents said cited an independent financial advisor (42%), their current pension provider (41%) or their employer (39%). 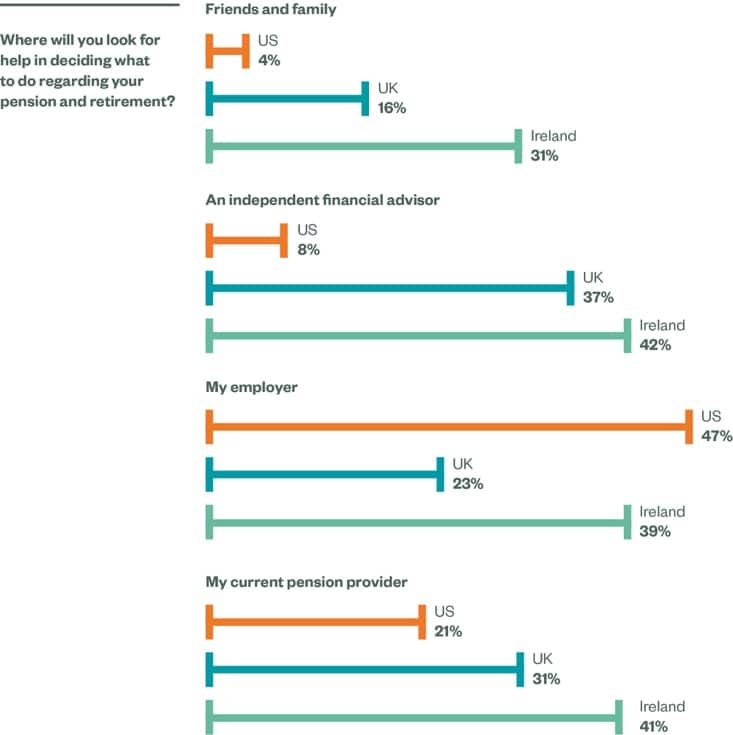 People feel the most uncertain when they are approaching retirement

We expect people to start making concrete plans for their retirement 10-15 years out, which coincides with the significant drop in confidence levels that we observed among 45-54 year olds in our sample.

In order to accumulate enough savings to fund a sustainable retirement, people will need to divert a meaningful amount of their earnings into their pension. Ownership and awareness are vital in order for auto-enrolment to work beyond the point of inertia.

Ultimately, the end goal, a financially stress-free retirement, is in the hands of the individual.

What does this mean for sponsors, schemes and the wider industry in helping members to achieve better retirement outcomes?