COVID-19 Macro Impact: How Do You Forecast When the Typical Forecasting Tools Are Of Little Use?

The health-related nature of the Covid-19 shock and the aggressiveness of related policy responses, both restrictive (lockdowns) and supportive (monetary and fiscal stimulus) greatly diminish the forecasting and interpretative value of coincident macro indicators. Our interpretation of the likely course of events leads us toward a more optimistic view of the ultimate net economic impact than what we perceive current market consensus to be.

It has become almost a cliché to say that this is a crisis like none other we’ve experienced during our lifetime. And yet there appears to be inadequate emphasis on how to think about it differently compared with prior macroeconomic shocks.

There are two key questions that need addressing in order to anchor a macro impact view. First, given the mandatory and economically indiscriminate nature of lockdown orders, the first question has to do with how long will these last. On this topic, we take guidance from past experience: we have learned from prior health scares that containment works; we see no reason why it would not work this time around. The earlier and more drastic the containment, the better it works. Yes, the bigger the economic cost near term, but also the shorter the maximum impact duration. In a way, the worse it is today in terms of containment measures, the better it will be tomorrow. It is sometimes hard to remember this in the midst of a crisis, but the data is already starting to bear that out in hot spots such as New York City, Italy, and Spain. Another thing to remember is that the main purpose of containment is not so much to reduce the total number of infections (which are largely simply re-distributed over time) but rather to reduce the number of deaths by buying time for the healthcare system to scale up capacity. So far, even in the worst hit areas of the US, the healthcare system has coped. With no room to spare, but it has coped.

Public healthcare experts are debating the appropriate conditions to be met before authorities should begin shifting from a blanket approach to a more selective approach. These vary, but include:

1. A sustained decline in cases for at least 14 days (one incubation period)

2. Hospitals able to cope with case load without deploying emergency standards of care

4. Increased ability to trace and isolate contacts of infected individuals

Based on the latest case data and improvements in testing and health system capacity, we anticipate that many parts of the US should be able to meet these requirements by the second half of May. Of course, this does not mean a single schedule for the entire country, nor will it bring about a full and instantaneous return to where we were before the crisis. However, even a risk-weighted re-opening would go a long way towards containing the economic losses incurred during the second quarter as a whole.

Indeed, the other important question to grapple with is how much economic activity will be lost during the lockdown, how much might be subsequently “made up”, and how much might be permanently lost. It is here that using past data and past correlations may lead us astray. Many of us have probably been surprised at the speed at which activities we longed assumed required direct interaction have successfully migrated to remote delivery within a matter of weeks. While firms may and will certainly cut back on some types of investments, they may actually boost IT spending to cope with some of these demands.

Still, the unprecedented spike in initial unemployment claims recently demonstrates that many jobs cannot be done from home. However, two things are very different in today’s experience. First of all, thanks to the extra $600 per week which the CARES act has added to state-level unemployment benefits, many of the newly unemployed will see their incomes increase while on unemployment. And since it is not the employment status per se but rather the income associated with it that matters for private consumptions and GDP growth, we would caution against assuming that a double digit unemployment rate in this episode will have the same implications for GDP growth as in the past. Not only are the unemployed not experiencing the typical income loss, but the vast majority of them will likely be employed again by the third quarter. (Figure 1). 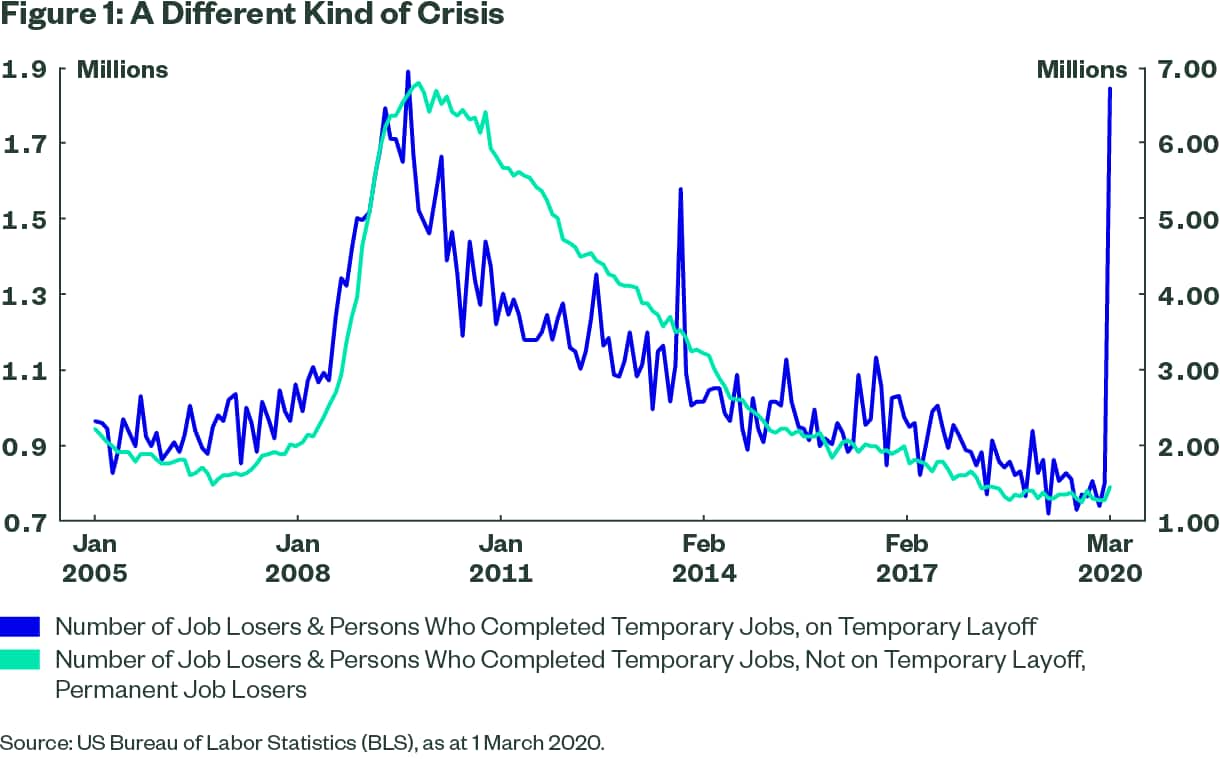 The question of how much economic activity will be permanently lost is closely related to the question of how many businesses will fail because of this shock. It is here that the extraordinary deployment of monetary and fiscal stimulus we have seen could have the greatest effect. While the Fed’s early actions focused on thawing frozen financial markets, its Main Street Lending Facility has one clear target: keeping firms in business by facilitating and incentivizing the flow of credit throughout the economy. Fortunately, banks are in a good position to assist this effort, and the combination should greatly reduce risks of second-round credit risk events by not allowing a liquidity crisis to morph into a solvency crisis. Fiscal policy support has been fast and substantial. Further action is possible, especially in respect to additional aid for state and local governments.

Given all this, we end up with a somewhat less negative view of the ultimate economic impact than what we perceive consensus to be. We’ve seen some forecasts calling for declines of 40-50% (saar) in US GDP during the second quarter. We think half of that or even less is more reasonable. And we’ve seen full year 2020 forecasts calling for a GDP contractions of close to 10%. We don’t want to claim any false precision here, but we are much closer to zero than -10%. And there is every reason to expect, assuming a vaccine will be in place by early next year, that 2021 could bring about the sort of broad global growth acceleration that could make 2017 pale by comparison.

There are clear risks to this outlook and we wish to acknowledge them. New infections, which appear to be peaking, may somehow reaccelerate. A second, equally deadly second wave of infections in the fall could once again force shutdowns, although we would expect these to be more selective given there would more immunity in the population at large and, most importantly, far greater testing capacity. And of course, some businesses will have succumbed to the original shock and never reopen.

Envisioning a New Normal
Coming back does not mean coming back to exactly the way things were. Every crisis brings about its scars but also its lessons. Some scars may never fully heal: the trend towards deglobalization may materially accelerate; the state may garner a permanently larger economic role; commercial real estate may sustain lasting losses in a world where remote working becomes more prevalent; and business travel may never be the same. But faster technology adoption across education, healthcare and a range of other industries could also bring about a noticeable improvement in productivity. Economists have long lamented that the benefits of technology seem to be conspicuous all around us yet oddly missing in macroeconomic statistics. If social media increasingly connects people not just for fun but also for work, that may finally change.

The information provided does not constitute investment advice and it should not be relied on as such. It should not be considered a solicitation to buy or an offer to sell a security. It does not take into account any investor’s particular investment objectives, strategies, tax status or investment horizon. You should consult your tax and financial advisor. The whole or any part of this work may not be reproduced, copied or transmitted or any of its contents disclosed to third parties without State Street Global Advisors’ express written consent.

The views expressed in this material are the views of Simona Mocuta through 15 April 2020 and are subject to change based on market and other conditions. This document contains certain statements that may be deemed forward looking statements. Please note that any such statements are not guarantees of any future performance and actual results or developments may differ materially from those projected. The whole or any part of this work may not be reproduced, copied or transmitted or any of its contents disclosed to third parties without SSGA’s express written consent.